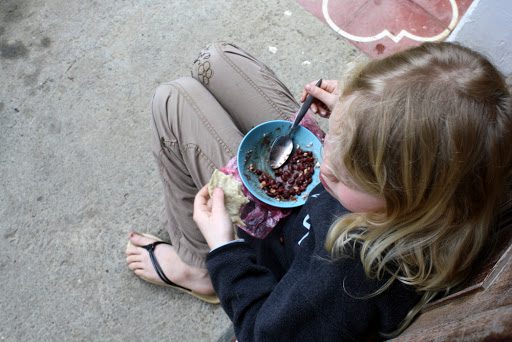 Taking her lunch on the front step.

It’s 2:30 in the afternoon. Luvia just left. The chairs are sitting upside down on the table and the floors are still damp from her vigorous and repeated moppings.

My husband and all four kids just left to do some errands. They have to go get more minutes for the phone, stop by a sewing shop and drop off some fabric to be made into curtains. The children are also expecting a treat. Maybe they’ll bring home some sweet bread for a bedtime snack.

There is granola in the oven and some potatoes. We’ll have fried potatoes and eggs for supper.

I am sitting in my bed, propped up by two pillows, the computer on my lap. Next door (on the other side of the wall), the carpenters are tapping away on their project (an addition to this house, but not for us). A bus just roared down the road. The fan in the far room is whirring loudly as it attempts the impossible—to dry some clothes. I am eating Wilbur Buds and fighting to keep my eyes open. 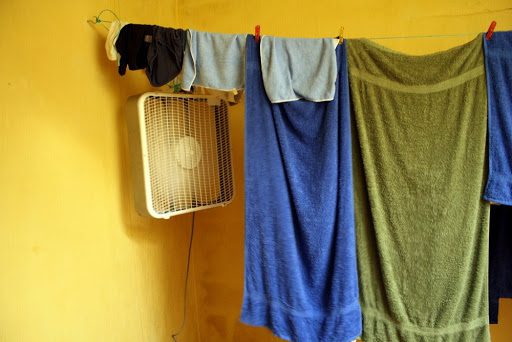 He hung the fan up on the line so the wind would hit the clothing directly.
Unintended bonus: the fan oscillates!

This is the second time I’ve made granola. The first time I used oatmeal that I got out of a bin in an upscale grocery. There were a few dried beans in the oatmeal (from the bins next to the oatmeal), but I thought nothing of it and just picked them out before proceeding with the recipe. However, when we sat down to eat our much anticipated meal of regular granola mixed with cornflakes, we kept biting down on something hard.

“There are rocks in this granola!” my older daughter exclaimed. She spit out a piece into her hand and we studied it.

Rice! Bits of rock-hard rice were all through the granola! I had to throw it out, much to my dismay. I’m not used to ever throwing food directly into a trash can, but here there are no chickens to feed…yet. 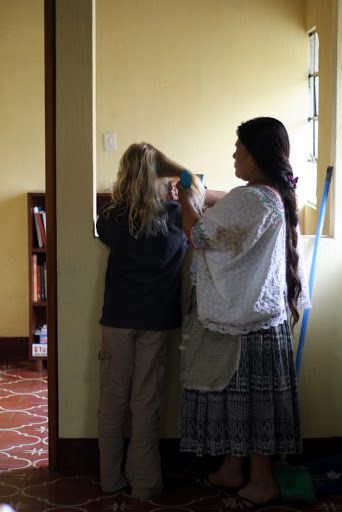 Combing and braiding my daughter’s hair.
She braids it to the very tip and ties it off in a knot, no hair bands necessary.

I mixed up a second batch of granola today and then burned a small bit of it. I’m still working out the kinks of the oven. It has some pretty violent hot spots. Luvia asked permission to take home the burnt parts.

“Do you have chickens?” I asked. 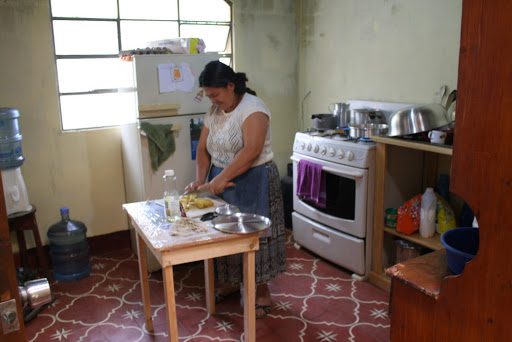 Cutting potatoes for the fried rice (that I let burn when she was out buying tortillas).
She loves my knife, and with good reason – the knives here are TERRIBLE!

She also took two of our empty milk jugs home with her. For carrying coffee, she said. I’m glad things aren’t going to waste, but it’s awkward, having our trash be someone else’s treasure.

The rainy, cloudy, cold weather continues. Someone told me that here the cloudy days aren’t as oppressive as they are in the states, but I beg to differ. Here, they are equally oppressive. The difference is that here the streets are crowded with people walking everywhere, regardless of the weather. 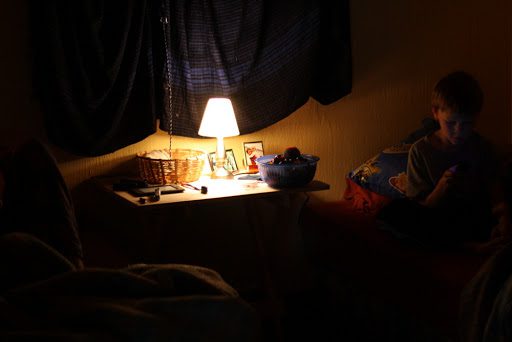 To buy a little peace and quiet, we let the kids play games on our cell phones.

I am so glad I brought my twinkle lights (yet to be strung up), little lamps, and votives. Also, we bought two lamps to reduce the strain on our eyes—the bare, overhead light bulbs don’t provide sufficient lighting and we’re constantly squinting. 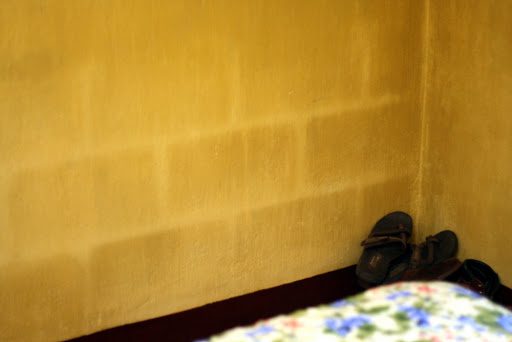 The corner of our bedroom.
See the outline of the blocks?
That’s the moisture showing through.

The inside of our house is very wet. Water seeps in through the concrete walls and runs down. They are wet to the touch. We can’t hang anything on the outside walls because of the moisture. I asked Luvia if this is how all the houses are and she said no. This house wasn’t built properly. Houses are supposed to be dry inside. Which is both encouraging and discouraging. 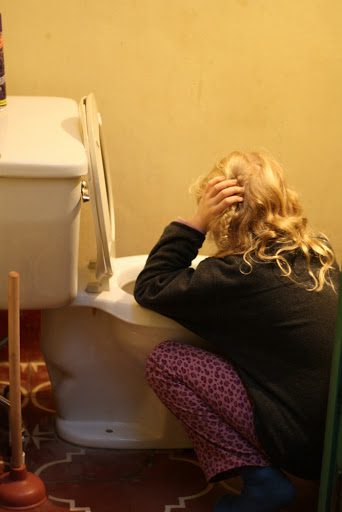 She spent three hours bonding with the toilet via puking and diarrhea. She’s fine now.

(Note: I said that we can see our breath and that is true. However, I’m figuring out that it’s not because of cold—though that may be true sometimes—but because of the wetness. It’s so wet that in the act of exhaling, steam is created. At least that’s what I think might be happening.) 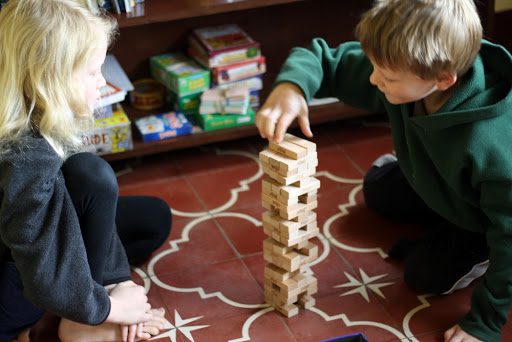 The constant fighting is interspersed with periods of pleasantness.
The are distraught over their lack of toys.
I tell them they’ll adjust.
They don’t believe me.

We are looking for another house to live in. I actually really like this house—the size and layout is quite nice—but the lack of outside space, privacy, and natural light, not to mention the leakiness and mold, constitute some pretty big drawbacks. We are going about fixing this place up, buying furniture, putting hooks in the (inside) wall, though, because it may be a little while before we can find another place (if we can find another place). 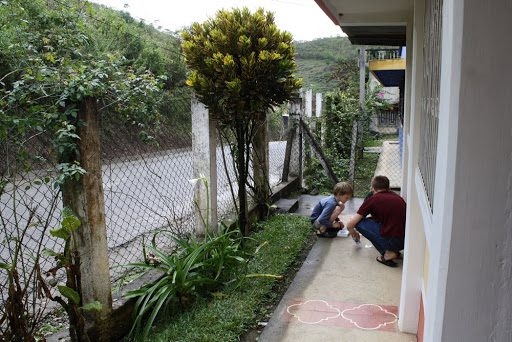 The front of our house: a one foot strip of grass (actual grass!) and a two foot strip of concrete.
(I can’t wait  until the rose bush blooms.)

A couple days we walked into town to do some more shopping. We do this almost every day. We buy what we can carry, get some groceries, discover a few more shops (oh, they sell chicks here! here’s a carpenter’s shop—let’s order some chairs! here’s where I can get flats of eggs! here’s the ATM machine! forks! I found forks! etc.) Some kids had to go to the bathroom so we stopped at a hotel.

While we were waiting, I suggested to my younger son that he burn off some of his energy by racing to the far end of the courtyard and back. So he did…several times. And then when the littlest one was at the far end, my older son asked if he could run, too.

“Fine,” I said, “just keep your head up and watch where you’re going.”

The boys took off, running at breakneck speed towards each other with their heads down. At the last minute, they realized they were going to crash, so they both swerved. But, oh horror, they swerved not around each other but into each other—BAM, they hit head on and both went down. My younger son bounced off his brother, spun around and smacked the pavement, nose first. My older son landed beside him, gasping for air and whimpering.

The older boy was fine, but the younger one had a bloody nose. The bridge of his nose had a red-purple mark, and at first we wondered if it might be broken. (It’s not, we don’t think, and though it was still a little swollen and sore in the morning, he didn’t complain about it anymore.) What a fiasco! (But at least I got to meet the hotel owners and learn the prices—it’s a nice place to stay. Visitors, anyone?) (Actually, if you come visit us, we won’t put you in a hotel. We’ll hold you hostage in our house and show you all our crazy and never let you go.) 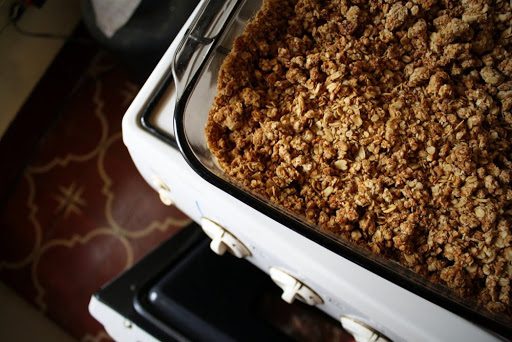 PS. The granola turned out perfectly. No rocks. Yay.