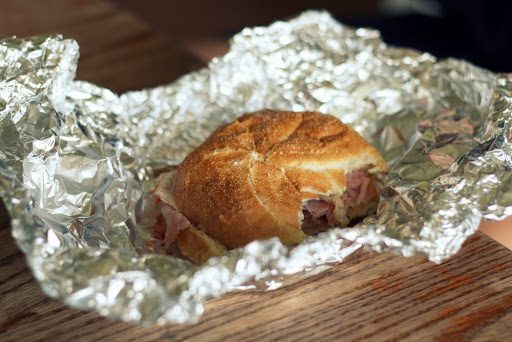 This year for my husband’s birthday present, I made him a bunch of lunches. Because the guy hates packing his lunches in the morning, I thought it’d be real sweet to make him an assortment of food and stick it in the freezer so that on weekdays he could just run down to the basement in the morning, load up his cooler, and go.

Actually, my gift wasn’t all that creative—I did the same thing another year. But I never know what to get him (he refuses to articulate any wishes), so it’s not like I have a ton of options. Besides, he has to eat anyway, and his morning grousing grates on my nerves, so look at me go, killing two birds with one stone, bam-bam.

Coming up with the foods to make ahead and freeze turned out to be a lot harder than I thought it would be. The foods had to be freezer tolerant and tasty at room temperature. Also, he’s lactose intolerant, so no milk, cheese, yogurt, cream, or butter, bummer. Plus, he’s not a huge fan of legumes (crazy man).

The snacks and cookies were easy enough. I mixed up a huge bowl of fruit salad and froze it in pint jars. I made a bulk batch of gorp and two kinds of cookies (one was dairy-free), portioning it all out into little baggies. But the main course stumped me.

I emailed one of my culinary guru friends. She’s a whiz at cooking for people with special needs, so I thought that for sure she’d produce a bunch of viable options. She, however, was equally confounded.

She wrote, “I can’t think of something that would be good after freezing and thawing, eaten at room temperature, and not including legumes or unusual grains or dairy, except for bread, muffins and cookies.  I have hardly ever done freezer meals, except for soup, so I don’t have much experience either.”

It wasn’t just me. This was a tricky situation.

My husband can tolerate a small amount of dairy when eaten with a lactaid pill, so in the end I resorted to cheese. I made pepperoni rolls and hot ham and cheese sandwiches.

The hot sandwiches were kind of a bust. Not only do they use cheese and get cold in the freezer (though they still tasted good when thawed to room temperature), but they use an insane amount of foil. And then my husband went and announced that he’s not exactly partial to the spread I used—a delicious, I thought, mixture of horseradish, dijon mustard, fake butter (that has lactose in it—who knew!), and poppyseeds. Oh well.

I liked my friend’s soup idea, so I got my husband a nice thermos for a birthday present. It’s great, I think (though my husband isn’t jumping up and down with glee), but using it requires a couple extra “cooking” steps in the morning—heating up the soup, warming the thermos, putting the hot soup in the warm thermos…. Simple stuff, yes, but my original goal was to make foods that had zero morning involvement. Just grab and go.

So. This is where I need your help. I’d like to have more ideas for foods I could make ahead and freeze for my husband’s lunches. The birthday is over, but it’ll come again next year.

Am I forgetting something? Do you have any favorite make-ahead lunch foods?

To recap, the requirements:

PS. I also gave him a gift card to Dick’s Sporting Goods store, so not all his gifts were food-related. In case you were worried. (I think he was.)