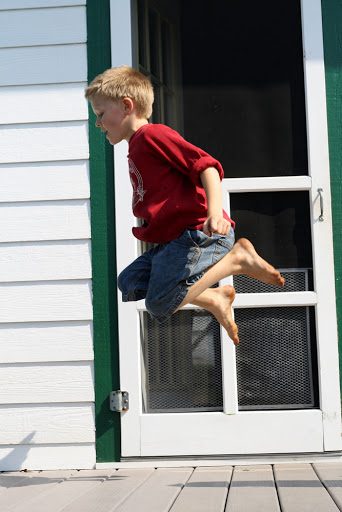 One afternoon, I decided I wanted some pictures of my kids jumping. Because the sun was shining and I was bored and I hadn’t played with my camera in a while and, well, just because.

Really, does there have to be a reason? I AM MOM (WITH A CAMERA)! HEAR ME CLICK!

We started out on the deck. Thataway, I could go down the steps and get a ground view of their airbornness.

They did pretty well, but I didn’t like the screen door backdrop. 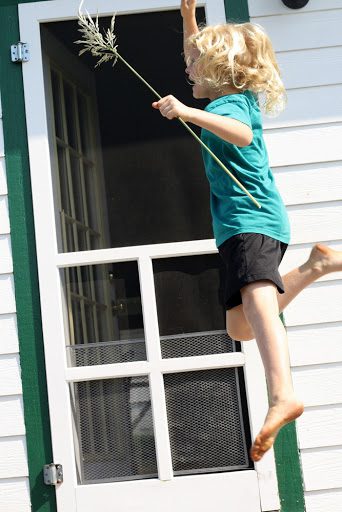 Also, I wanted a picture of all four kids in a row and there just wasn’t room. 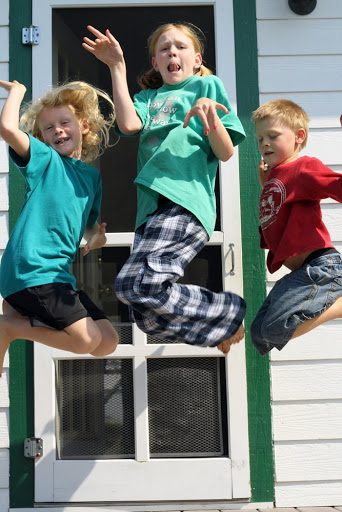 “I don’t want to jump,” my younger daughter said.

“Jumping makes me hot,” she argued. “And you just get to sit there in the shade. It’s not fair.”

I hate it when my kids get all logical on me.

“I’ll give you some candy,” I wheedled. (Note to parents: when you can’t win, use sugar.) 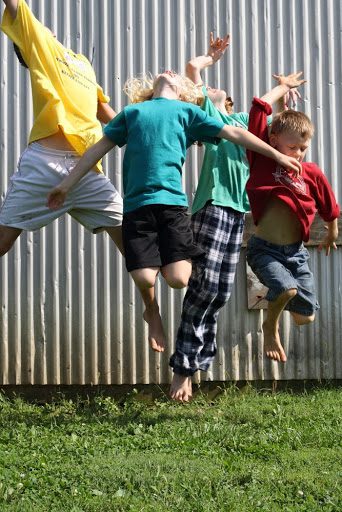 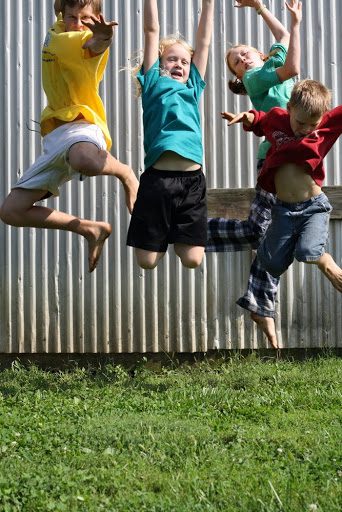 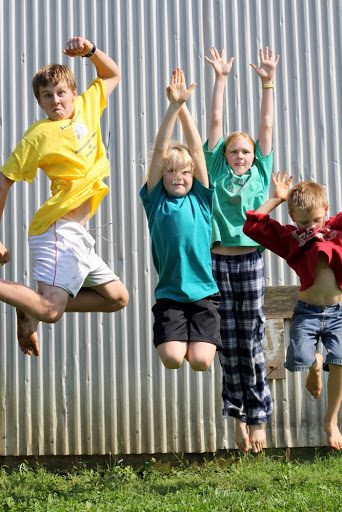 It wasn’t all fun and games, though. Even with a piece of candy dangling in front of them (figuratively speaking—I didn’t actually hang the candy from the edge of the barn roof), they still got balky. Like the infamous animal that shan’t be named but that is related to a horse. 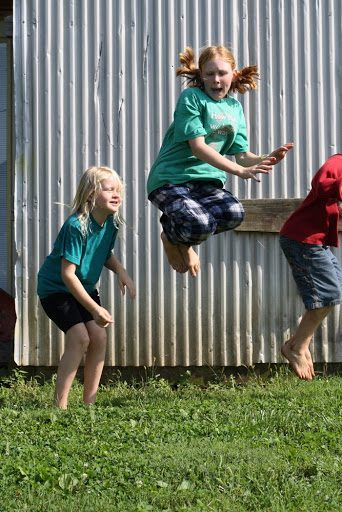 They refused to jump in sync, and they kept shifting their assigned positions so I couldn’t see everyone. 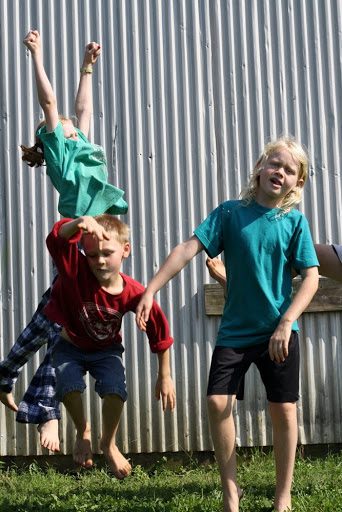 Or they’d start jumping and refuse to stop, even when I was calling out orders. 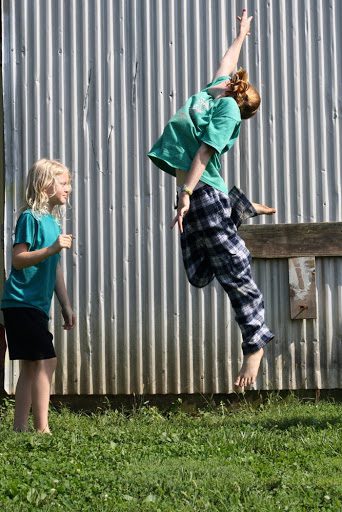 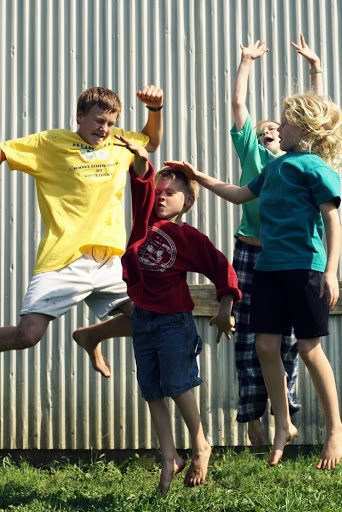 A fist fight happened, of course. Because fists are how certain people in our family express themselves. And then there were tears and threats of “there won’t be any candy if you don’t get back out there and jump.”

I told some of the kids to look sulky while I ordered one to jump ecstatically. 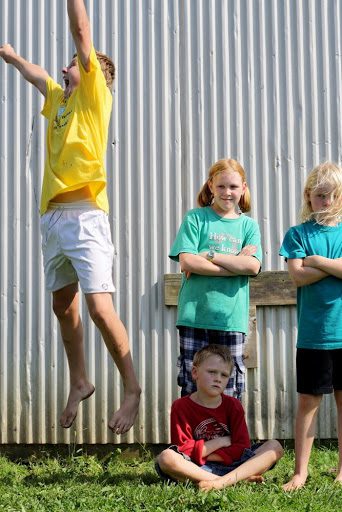 The one kid couldn’t make herself look mad to save her life.

But then she stuck her tongue out. 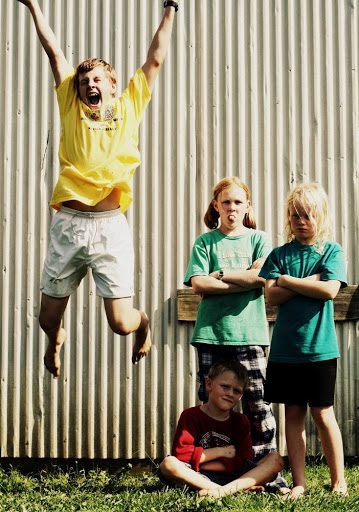 (Forgive the differently processed photos. I started playing around and then I didn’t feel like taking the time to make everything uniform. Sorry.)

The youngest went on a few solo flights. I call this one “A Study In Right Angles.” 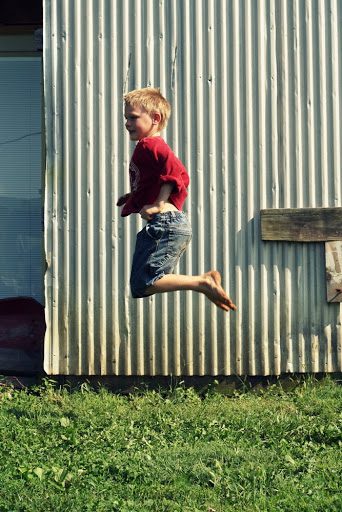 Homeschoolers, feel free to use this picture as a geometry lesson.
When the oldest child wimped out, the older daughter took over. 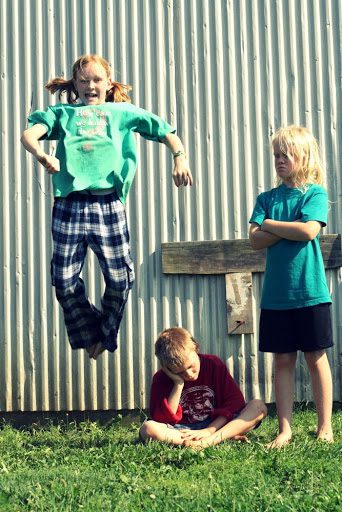 In the end, the youngest fell over with his tongue hanging out. 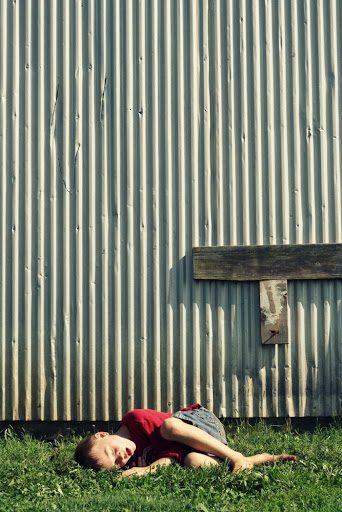 “I was pretending to be dead,” he told me proudly.

This same time, years previous: a family photo shoot from 2008 (no jumping, but there was a strangulation)