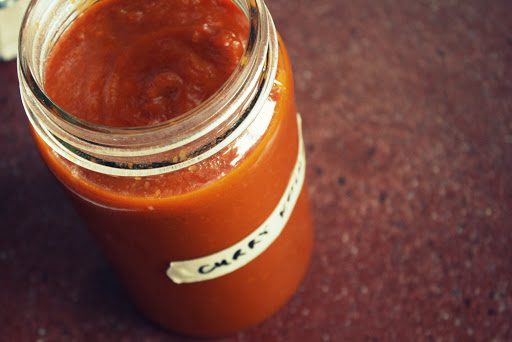 I’m a novice at ketchup-making, but all experts have to start somewhere, right?

This year I made three kinds. One was good but a little too vinegary. (Plus, my husband didn’t turn off the crockpot like I asked him to and it got very dark. I canned it to use in cooking. The other day I added some to my sloppy joe recipe and it enhanced the joes tremendously. So, yay!) Another wasn’t really a ketchup at all, since I put curry powder in it, but still, I call it a ketchup. And the last one was straight-up simple, about as close to Heinz as you can get.

This ketchup is like something you might find at a high-end restaurant, the kind of place that messes with the basics in a pleasantly surprising way. I don’t want my basics messed with all the time, mind you, but a bit of different now and again is a good thing, I believe.

The original recipe hails from Germany and is called currywurst sauce. It’s supposed to be eaten a-top sausages. I’m sure that would be most scrumptious, but we have yet to try it that way.

So far we’ve eaten this ketchup with oven fries, zucchini fries, and spooned over green tomato curry like a chutney. I figured that would be a stellar combo since tomatoes and curry are star ingredients in each recipe, and I was right. (Also, I suspect this curry ketchup would go well with the golden curry, but I haven’t gotten around to trying it yet.) 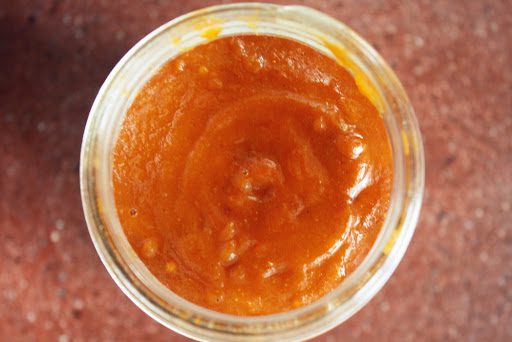 The recipe called for hot paprika. I didn’t have any, so I used smoked paprika and a couple pinches of chipotle powder instead.

Saute the onion in the oil until soft. Add the curry powder, smoked paprika, and chipotle powder and saute for another minute. Add the tomatoes, sugar, and vinegar. Cook over medium-low heat until reduced a bit, about 30 minutes. Blend until smooth, season with salt, and cook until it’s the desired consistency—thick, like ketchup.

Yield: about 1½ cups. Store in a jar in the refrigerator.

The problem with many homemade ketchups, so I’ve read, is that they taste great but aren’t anything like Heinz. While I might be thrilled with a creative homemade ketchup, I was
pretty sure my children wouldn’t settle for anything less than something that tasted just like the store-bought variety. So I set about scouring the web for a homemade ketchup that tasted like mass-produced stuff.

I finally found a recipe with reviews that claimed you could hardly tell the difference between the homemade and the storebought. The only problem was that the recipe called for corn syrup.

Now I don’t know about you, but I’ve been programmed to believe that corn syrup is from the devil. It’s poison in a jar. It will give you cancer and make your butt big and absolutely ruin your reputation as an authentic, thoughtful cook. Corn syrup is for losers. Period.

But! I wanted ketchup that tasted like Heinz even if it meant I was a fraud, so I pushed my biases aside and made the stuff. 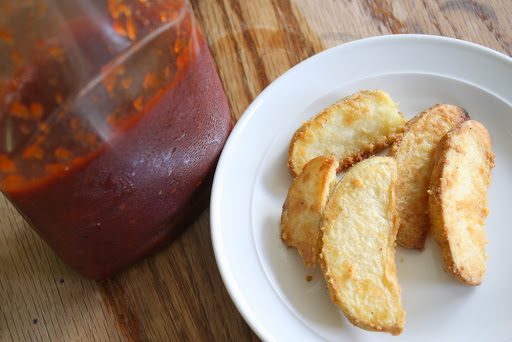 Wouldn’t you know, it was delicious! It had the same shiny, smooth consistency as Heinz, and it tasted wonderfully sweet and tart. It was the real deal!

So then, of course, I had to research corn syrup. I (lightly) read some articles on the web (here’s one, and here’s another) and discussed it with my biologist Dad, and you know what? Corn syrup isn’t as demonic as I thought! It’s just a syrup from corn—bad for you like sugar, but that’s all.

And get this: high-fructose corn syrup isn’t even all that evil—it’s just intensified corn syrup! The problem with the high-fructose stuff is that it’s double the sweet which equals double the trouble. So, you know, watch out. (Or maybe I am off my rocker? Maybe corn syrup is sticky poison? Am I missing something?) (Also, if you know of a non-corn syrup ketchup that tastes just like Heinz, do tell.) 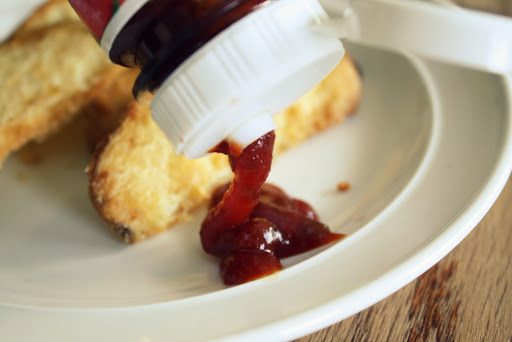 In any case, I’ve concluded that homemade ketchup-that-tastes-like-Heinz needs to have corn syrup. It’s necessary for the trademark satiny glow and velvety texture.

I’m even willing to put my culinary reputation on the line for the stuff. 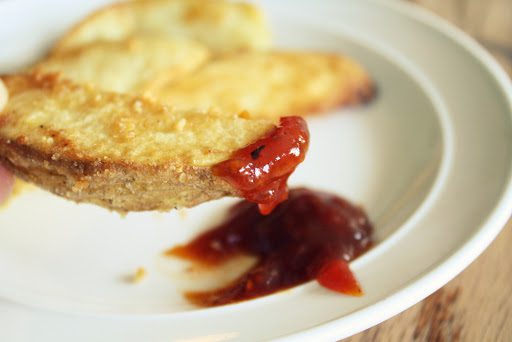 I used my own canned roasted tomato sauce instead of the called-for tomato paste, so my ketchup had a bit more texture—random seeds and such—and the kids took issue. I ignored them, because they were being ridiculous, but then I relented and let them mix the homemade with the store-bought, half and half. I have high hopes that they’ll soon acclimate.

Combine all ingredients and bring to a boil over medium-high heat, stirring frequently. Reduce heat to medium-low and simmer until thick, unlidded, about 30 minutes. Cool to room temperature and pour into an empty Heinz ketchup bottle. Store in the fridge.