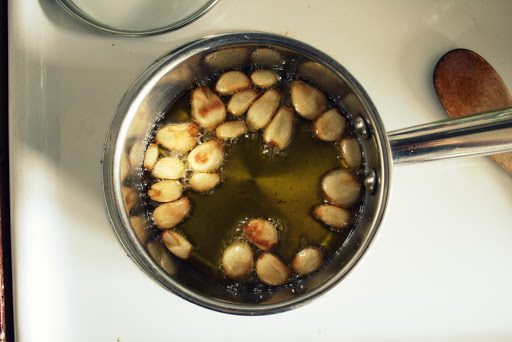 I never got a picture of the finished sauce. Both times I served it, we were too eager to dig in.

I did get a photo of the garlic simmering in olive oil, though:

For the whole story, go here. (Warning: there is a blaring grammatical error. See if you can find it. (Hint: my son’s friend’s eyes have special talents.) (If you find other errors, don’t bother telling me.) (Well, you CAN tell me, but I might cry. Grammatical errors—of which I commit many I KNOW—make me curl up into the fetal position, and it’s kind of hard to write on a laptop while in the fetal position.)

Garlicky Spaghetti Sauce
Inspired by a recipe found in the August 2012 issue of Food and Wine magazine.

Despite the emphasis on garlic, the sauce is not overly pungent. The long cooking softens the bite considerably.

For the sauce:
Bring the tomatoes to a simmer in a large pot.

Measure the oil into a smaller pot and add the garlic. Bring to a gentle boil and cook unlidded for about thirty minutes, stirring occasionally, until the garlic is golden brown and very tender.

Add the garlic and oil to the tomatoes. Using an immersion or regular blender, blend until smooth. Simmer for about an hour until the sauce has thickened a bit. Add plenty of salt and black pepper.

Set aside half of the sauce to freeze for a later batch of spaghetti or to use as pizza sauce.

For the spaghetti:
Cook one pound of spaghetti to al dente. Drain and return to the pot. Add two cups of the remaining hot sauce and cook for another minute. Serve the spaghetti, ladling more sauce over each portion. Garnish with basil and Parmesan cheese.

This same time, years previous: barley and beans with sausage and red wine