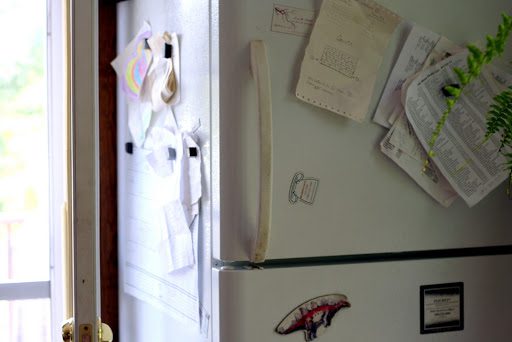 Yesterday morning when I was driving to town to help load the Fresh Air kids onto the bus for their trip back to New York, I heard a little blurb on NPR that I’ve been mulling over ever since. It went something like this:

North Americans have a clutter problem. Fifty percent—40? 70? um … a large number—of garages are so full of stuff that there is no room for the cars they were built to house. And you can tell the state of someone’s house by looking at the outside of their refrigerators. A messy magnet-y mess is indicative of a house with too much stuff.

We do not have a garage, so I ignored that statement. But after a nanosecond of introspection, I realized that my fridge is truly indicative of the state of my house, and not just in regards to clutter.

My fridge is partially covered with papers, beat-up random magnets, a large much-looked at calendar, a bunch of lists, a couple odd-ball pieces of children’s art work, and some other pieces of paper that I haven’t gotten around to tossing for the last two years or so. The top of the fridge is gently mounded with books to return to the library, a broken radio, random cassette tapes, a tube of wrapping paper, a deflated ball, and a couple confiscated sharp sticks. The refrigerator door does not have a handle, and there are dents in its side from where the deck door slams into it. 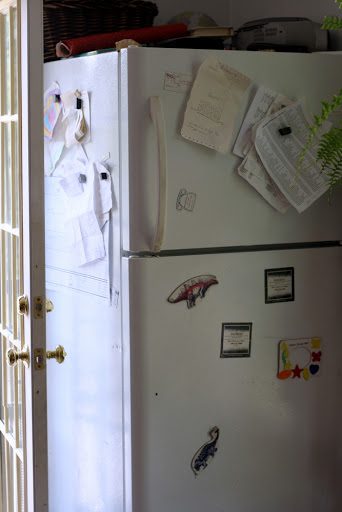 So according to my fridge, my house is not cluttered (too much) but what’s in it is broken, beat-up, and worn out. Functional wins out over pretty. We have a nightmare of a filing system, and the attic (the house’s top of the fridge) is loaded with forgotten stuff.

I could spend five minutes and whip the outside of my fridge into pristine conditions—well, except for replacing the door handle; that would take more time—but I don’t care so much about the outside of it. It’s the inside that I find more interesting, and tasty. Open the door-that-doesn’t-have-a-handle of my fridge and you’ll find cartons of whipping cream, a bowl of roasted beets, a bunch of special meats for the birthday girl’s supper, cucumbers from a neighbor, bottles of wine, milk, loads of condiments, and dozens of eggs from our chickens (again, in keeping with the theme of less than perfect, many of them are cracked, thanks to pecky chickens and klutzy kids). 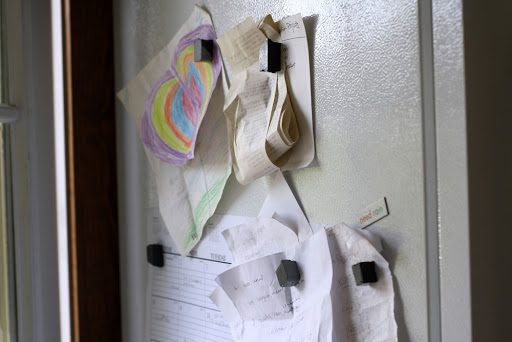 I love cozy, put-together, lived-in homes. They are relaxing and welcoming. But no matter how hard I try (admittedly, I don’t try very hard), I can’t get my feathers in a ruffle over finishing the window trim or fixing the dining room table so it doesn’t almost collapse when someone leans their elbows on it (which you’re not supposed to do at the table anyway, so there).

However, of the three adjectives I used in the first sentence of the last paragraph (“cozy,” “put-together,” and “lived-in”, for those of you who don’t like to have to work when you read), I’m only missing the second one. We have lots of gentle lighting (even if the lamp shades are dusty and have permanent marker scribbles on them), soft chairs (that tip over backwards and don’t match), and easily accessible supplies like (mismatched) hanging mugs, (old pickle) gallon jars of granola, and (spilling over) mountains of books. And there’s certainly no doubt about it, we live in this house.

And that’s the story my fridge told me when I looked at it.