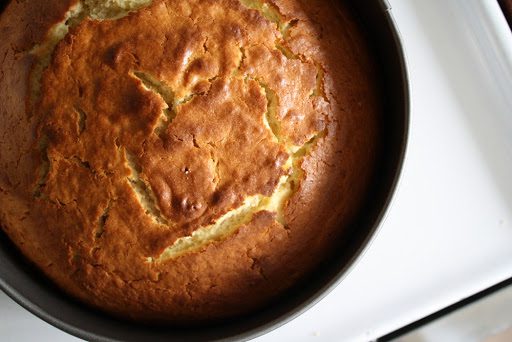 Monday morning I got an email from my editor saying that she needed
my column by two that afternoon because, due to the July 4th holiday,
they’d be running the Flavor section a day early. I spent the morning
furiously writing (my husband took the kids) and sent it off with seven
minutes to spare.

Also, I’m completely out from under The Play’s Cloud. I don’t miss it or think about it much anymore, so that feels good.

In other words, I’m all sorts of liberated this week.

But
back to the column. In it, I wrote about a book I read and how it’s
changed my perspective on eating. I didn’t make all my points in the
column, though. I couldn’t—I didn’t have enough time to hone my
thoughts. Plus, I had too many ideas for the allotted 600 words.

The main point (and you better go read the column
first if you’re to have any idea of what I’m talking about), one that I
think I’m just beginning to catch on to, is that we (North America?
Mennonites? Just my family?) eat for both pleasure and to fill ourselves up, yet food has a primarily utilitarian purpose.

Much of feeding my kids involves me saying, more or less, Just get it down.
They are to eat the peas because they’re green, the beans and rice
because they’re nutritious, the oatmeal to fill them up and give them
energy for the day. It tastes good, too, but to dwell too much on the
flavor seems snobby.

While the French eat for
fulfillment, too (obviously, they’re human), they also put high priority
on enjoyment and flavor. Dinner doesn’t get slapped on the table—it
gets portioned out, discussed, appreciated. Food is to be savored. The differences between the two approaches are small, yet profound.

I
was explaining these ideas to my mother and she said, “That’s a really
sophisticated perspective of food. Starving people can’t eat like that.”

That exchange, right there, perfectly sums up the tension: I
feel guilty about eating well. In fact, maybe I even eat like starving
people—quickly and too much—because I don’t know how to handle the
bounty.

The funny thing is, I’ve been taught it’s
fine—virtuous even—to spend hours upon hours growing, preserving, and
cooking my food. Yet, somehow, spending much time eating it is
sumptuous and excessive.

Of course, I’m not French and
I’ve never been to Paris (or even Europe), so all my information is
second hand and therefore probably skewed. But when I serve French-style
meals to my family, they are well-received, even with the “adult food” emphasis, so I do think I (as a pseudo French person)
am on to something.

We had a French-style lunch
yesterday. Just my younger son and older daughter were present, and
since my daughter was gone all last week and this was the first time she
had one of these meals, I asked my son to explain the rules to her.

“No fussing,” he said. “And you don’t have to eat everything.”

(Several times, he’s accidentally said “curses” for “courses,” as in, “What’s the next curse, Mama?”)

It’s
all normal food, leftovers and such. But the genius lies in serving
only one thing at a time, with the veggies being first, and actively
discussing the flavors—why they are paired up together and so on.

With
meals like these, there’s a little more planning involved, but that’s
mostly because I’m not used to laying out meals in this manner. Also, I find
I’m thinking about vegetables and fruits more—they’re not simply a side,
they’re the star.

Last night’s supper:
First: a cucumbers, tomatoes, and peppers salad
Second: grilled flatbread with pesto
Third: watermelon and cantaloupe
Fourth: good cheeses (a creamy buffalo and a smoked sheep) from NYC
And after the sun went down: ice cream cones

There
was a cake recipe in that book, so of course I made it. The author
claims it’s so simple that French kids make it all the time. It’s
low-maintenance, for sure, the only tools required are a whisk and one
bowl, but it took me three cakes just to get a feel for it. 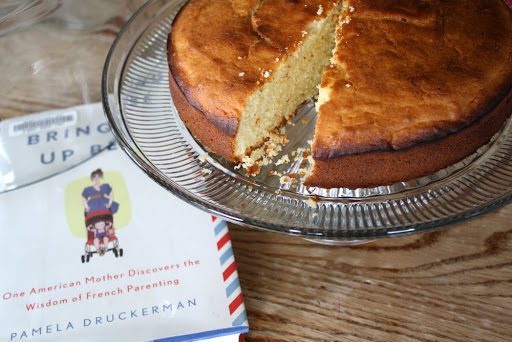 The
first cake: I bought two six-ounce containers of yogurt and then, like
the recipe said, used the empty yogurt containers to measure the rest of
the ingredients. But I think that method led to inaccurate
measurements—the resulting cake was too dense and dry. However, it had
great potential, we all agreed.

The second cake: I
converted the measurements to standard cups and made the cake again.
Yummy, but the bottom of the cake had a single, thin layer of
denseness—not doughy and not un-done, just a little line of heaviness.

The
third cake: I turned to the web. There are tons of yogurt cakes out
there, mostly from bloggers who read the book and then made the cake (a
lá Yours Truly). I chose one that was simple and clean-cut. It had an
extra egg, less sugar, and some nutmeg, but was still heavy on the
bottom. We preferred the second cake. 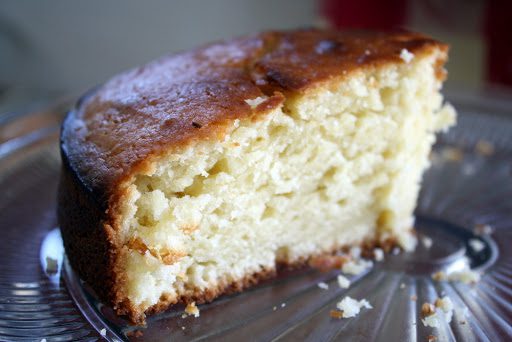 So
then, rather than make a fourth cake, I decided that the little bit of
heaviness (and it really is hardly noticeable) is just how it’s supposed
to be. The cake itself is delicious: mildly sweet and noticeably tangy
from the yogurt and with a unique crumb—moist, dense, chewy, and springy. 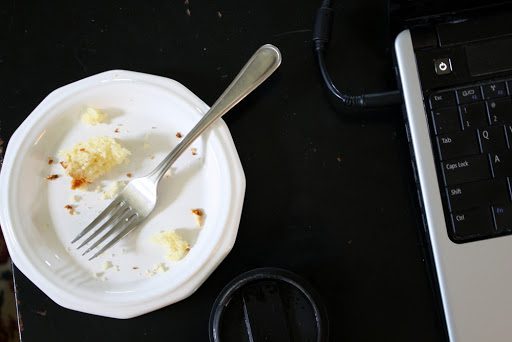 Whisk together the yogurt, sugar, eggs, oil, and vanilla. Add the dry ingredients and stir to combine.

Pour
the batter into a greased, 10-inch springform pan (or two round cake
pans) and bake at 375 degrees for 35-45 minutes or until the top is
cracked and an inserted toothpick comes out clean.

This
cake is great served plain, with a cup of coffee, or with whipped cream
and fresh berries. Also, I think it would be fabulous crumbled into a
bowl, topped with sugared strawberries and drowned in milk.