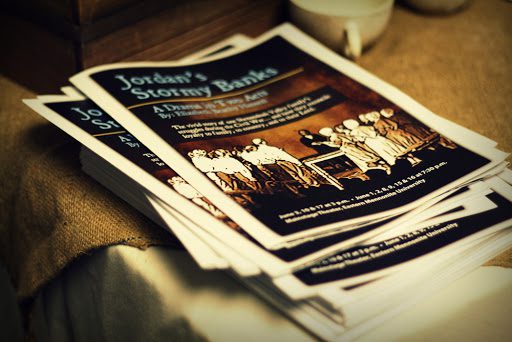 I’m finally acclimating to the play. It took a solid four weeks but I’m there. Which is a HUGE relief. I thought I’d never get there. I thought I’d never have my lines down, never get the hang of hair and make-up and corset, never actually be able to pull it (the play, not the corset) off. In fact, up until the last minute, I harbored a secret fear that I’d be replaced. Nobody did a thing to make me feel that way—it was just my wicked imagination raking me over the coals. 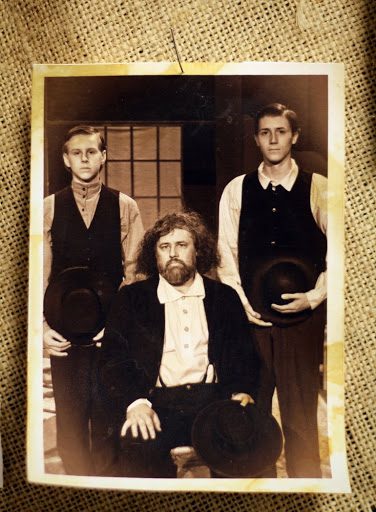 I get horribly nervous when I have to do something up front in church and I was super stressed that I’d feel sick with nerves when I was on stage. But it isn’t like that, not at all. I get a little tense before walking out on stage (a snug corset does wonders for trapping the butterflies), but it’s peanuts compared to real Dread Nervousness. And it’s oodles of fun once I’m out there. I never knew acting could be such fun. I haven’t played this hard in a long time (no pun intended, sorry). 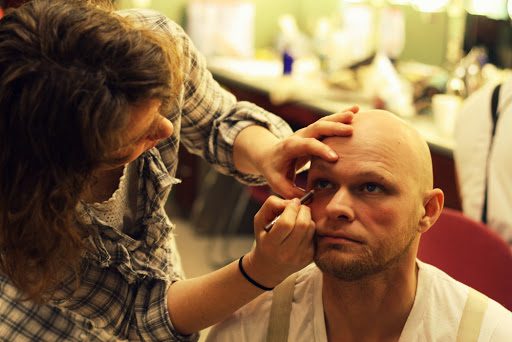 One thing I always wondered: how do actors transition between being themselves and being someone else on stage? It’s funny, but in between our scenes, we’re all back in the green room talking about everyday stuff. Some people are on facebook, others are doing homework, some are reading. And then when our scenes come up—bam—we run out on stage to have a nightmare or shoot somebody. It’s weird, in an interesting sort of way.

Sir Ian McKellen sums up the acting dichotomy quite tidily (thanks, Ingrid).

I promised you blood and burn pix. 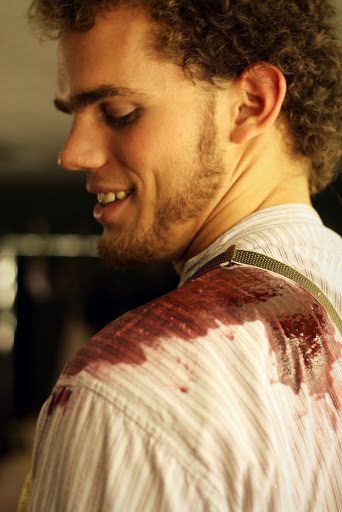 It’s a mixture of corn syrup, laundry detergent, food coloring, and something else (chocolate syrup?) that I can’t remember. When I come out for my last scene, I never know how much blood I’m going to find. Sometimes there’s almost nothing, and other times there are great pools of it on the floor. And then when I have to say, “The pain’s made him weak, but it’s a clean wound,” and I pick up his head and there’s blood everywhere, I have to suppress the urge to laugh. 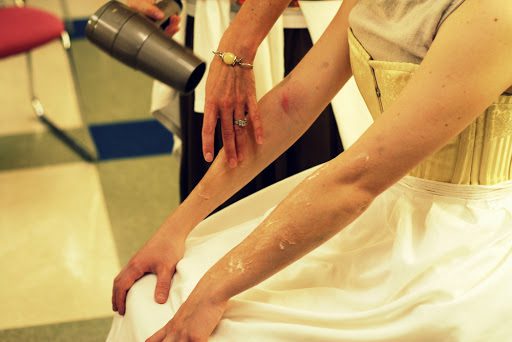 Since her arms are completely covered during the show, they put on the burns beforehand. 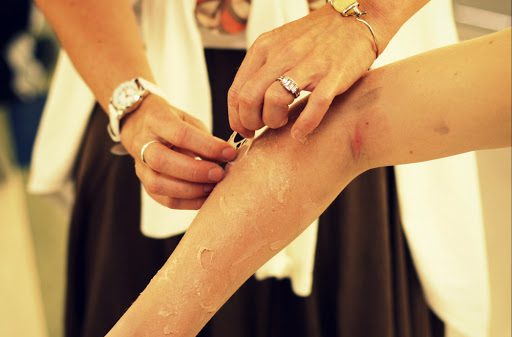 They paint her arms with liquid latex (or something), dry it, and then pull at it to make blisters. 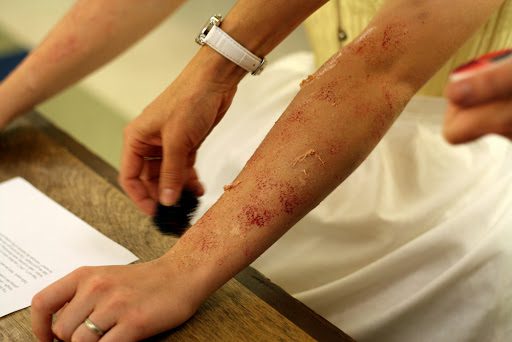 They stipple on blood. 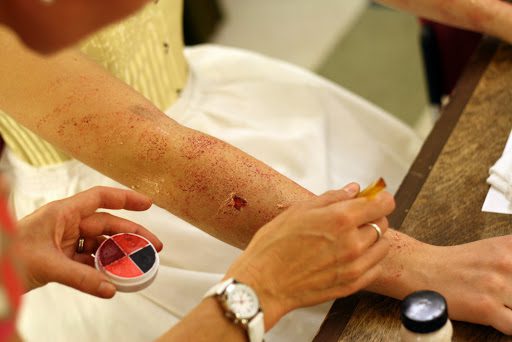 Then they paint the insides of the blisters. 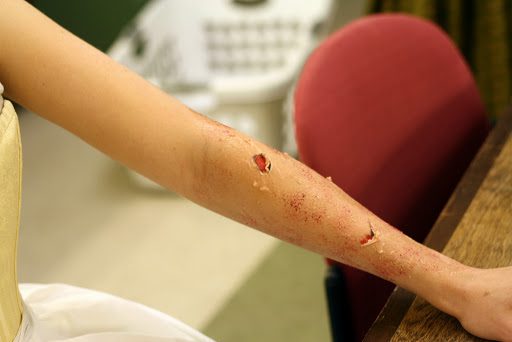 Gruesome, yes? (And that’s just the beginning. There are a lot more blisters/blood by the time they’re all done.)

During the play, I have to apply salve to the burns—the first time, I could hardly stand to touch them. (It didn’t help that she was wincing so convincingly.)

Regarding clothing: I feel like I should have some great revelations concerning fashion to share with you now that I’ve gotten to experience 19th century dress firsthand. But I don’t. 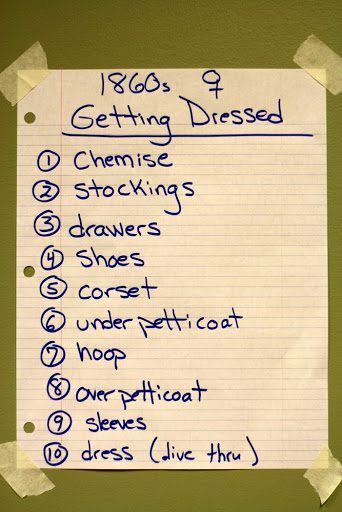 I’ve gotten kind of used to sporting a true waist and the sloping-shoulder look, managing a hoopskirt, wearing sleeves as a separate garment, and grappling with corset strings, aprons, bonnets, and boat-sized bloomers. That women actually wore all those layers—and worked in them—still blows me away. 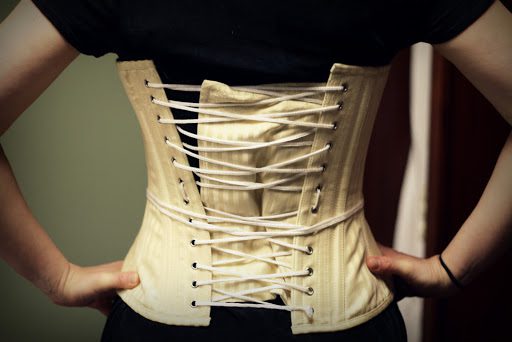 the back of the corset: getting dressed is a communal event

One of the women in the cast had a panic/claustrophobic attack when getting dressed and had to switch to a softer, less restrictive corset. I got her old one. Only once did I come close to panicking, and that was because I was super hot. It was a mental battle to not think about how pinched my skin was and how many layers—five—were piled on top of the corset, preventing me from relieving the pressure.

Oh yeah, and at a couple rehearsals (before the air conditioning was working properly), my vision got all blurry around the edges. I thought I was getting a migraine. Only later did I realize that it was probably because I was overheated.

Now I understand why women back in the day were given to fainting spells. Duh.

A couple things I learned:

1. To facilitate going to the bathroom, bloomers were crotchless.
2. Women were very excited when hoop skirts were invented since they allowed for more air circulation under all those clothes.
3. Sleeves and collars were separate—that way they could wear out and be replaced without having to make a whole new dress.

One of my friends was watching me get dressed the other night. “Wow,” she said. “I didn’t realize you had all that stuff on under your dress!” 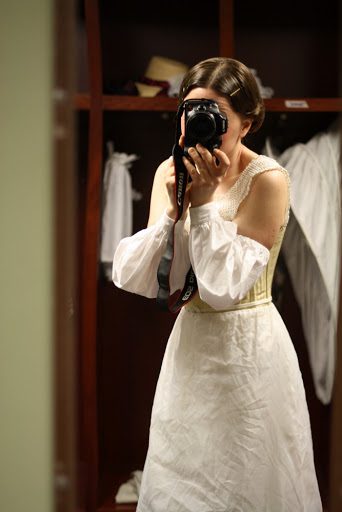 When I mentioned to another friend that I think we should do a costume strip after the show so that people can fully appreciate the lengths to which the (skilled and gifted) costume designer went, he said, “Yeah, they can just put a pole up there on the stage…”

My husband came to see the play on Friday. I wanted him to see it by himself first so that he could pay better attention to the kids when he brings them this weekend. I was worried it might be a little scary for them.

“Scary?” he said, surprised, when I asked him afterwards. “No, it wasn’t scary. It was … emotional.”

And then, a little sheepishly, “I teared up a couple times.”