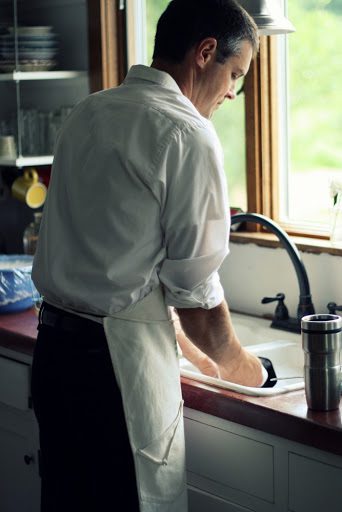 My husband and I had a date night this past weekend. At first we just made plans to usher at the Blackfriars. But then we found overnight care for the kids at two different houses and decided to leave a little early so we could get a hamburger at Five Guys, yum.

‘Tis Pity She’s a Whore was the name of the play we were ushering. I had been warned it was a dark play (and that under no circumstances whatsoever should I take the kids to it). In fact, I had long ago decided I didn’t want to see it at all.

But then I got curious. It might be interesting to see how the actors pulled it off. I’d seen them do dramas and comedies, but a dark and bloody tragedy would be something new. Still, I was worried. Would it mess with my mind? Would our sweet date night be ruined?

I was surprised by my reaction. I liked the play! It wasn’t exactly fun to watch, but it was extremely well executed (no pun intended), and the sex and violence weren’t gratuitous. The play was ugly and raw, yes. But not raunchy. It probably helped that I was so caught up in the acting details—how the blood got on stage, how they comported themselves while being nearly naked, how they acted those hard scenes and still remained emotionally stable individuals (though I guess they could all be wacko and I’d be none the wiser).

The next morning, we slept in (to 6:30) (I am constitutionally unable to sleep in—it’s a curse). My husband told me the following story while I was still half-asleep. It made me laugh.

The previous day, he was at home with the kids while I was at rehearsals. He was tilling the garden and the kids were playing on the front porch. He went into the house to check on them and they weren’t anywhere around. He thought they had maybe taken the TV and were watching a movie upstairs (wouldn’t be the first time), so he went to check.

They were on the front porch roof. They had hauled out blankets, toys, books, and a radio, lathered up with sun screen, and were hanging out like a pack of college kids (minus the beer).

My husband went back downstairs and used his cell to call them on the house phone. Nickel came running down to answer it. He never saw his papa crouched down between the plants and the fridge.

Papa: Hi. Where are you?

Nickel (walking around, looking for his papa): Playing downstairs.

Papa: Let me talk to your sister.

Papa: Where are you guys?

I want you to think very, very carefully about what you say.

Daughter: (Pause.) On the roof?

We got dressed for church (no yelling at kids required) and readied the house for the noon meal. My husband suggested we hit the bagel shop for breakfast, so we did.

Two meals out and a play equaled one much-enjoyed date night. And, considering that I’ll be gone most evenings from 6 until 11 (give or take some minutes) for the next month, it was a smart, preemptive move, too.