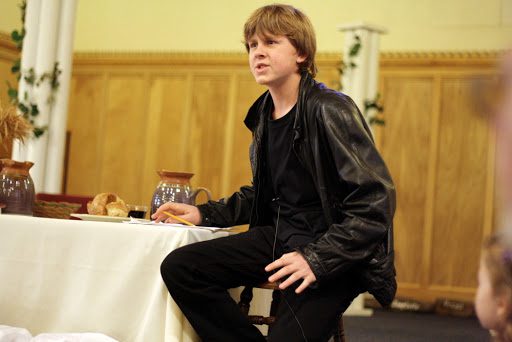 I was in charge of the scripture reading for Sunday’s service. Except I got my son to do it instead of me, and I made him memorize it.

In the King James version. 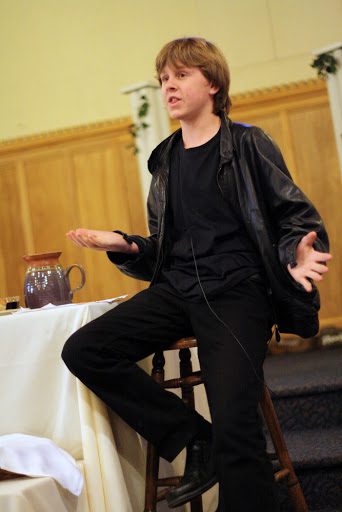 With some Shakespeare thrown in just for the heck of it. 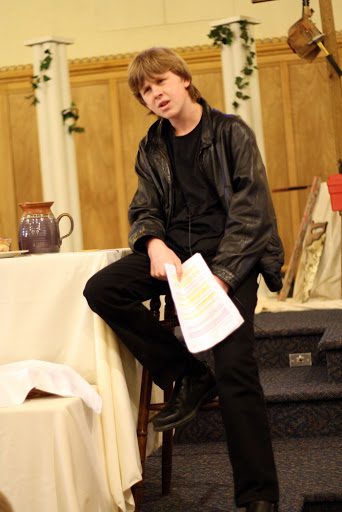 Don’t you wish you had me for your mom?

When I tossed out the idea of a dramatic monologue to him several weeks ago, he was all over it. And he had a lot of fun performing it (he says he wasn’t nervous, can you believe it?), but in the middle there, what with all the practicing, practicing, practicing, it was a little rocky. He got pretty tired of me telling him to ee-nun-cee-ate.

And to sit up straight.

And to turn his body towards the audience.

And to not drop his voice off at the end of sentences.

And to not, for crying out loud, say “hair” with a British accent.

“How do you know all this?” he asked me once. “How many plays have you acted in?”

“None,” I said flatly (discounting the oddball skits I’ve been a part of).

“You still have to listen to me.” 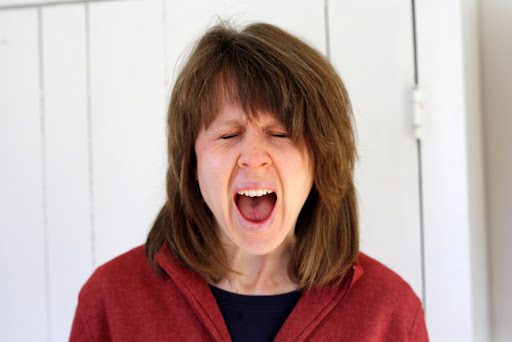 fraudulent me, demonstrating how to warm up face muscles

When my mom was visiting last week, he did a run-through for her while she took notes, jotting down little phrases such as“old lady shoulders.” (“See! I told you!” I crowed in his face.) 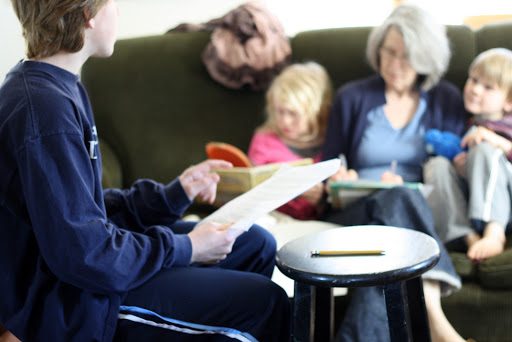 And then he quizzed her about all the plays she’s been in. She was a witch in one and let loose her best evil cackle. 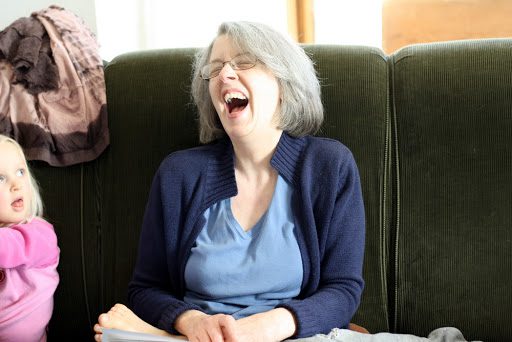 It was quite good. 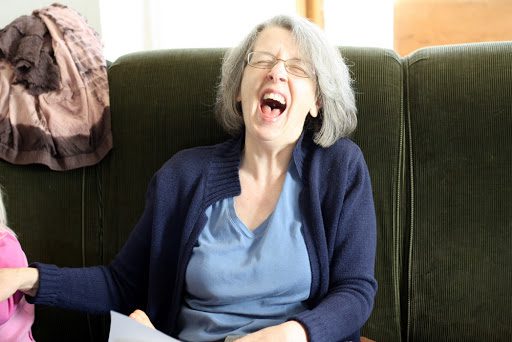 I half expected her to lay an egg.

On Saturday, the day before The Sunday, I, fed up with my son’s spiritless renditions, grabbed the papers and ordered him to sit down and watch. 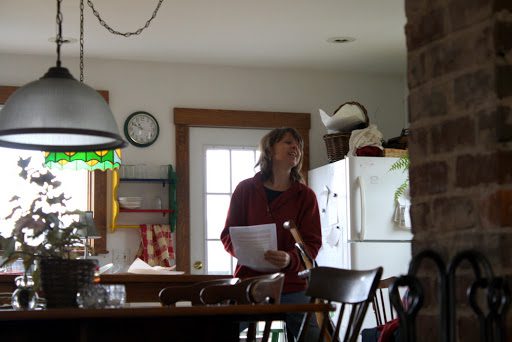 I pranced about with a good deal of hollering and rending of my hair, so much so that my husband left off his computer researching to stare at me. 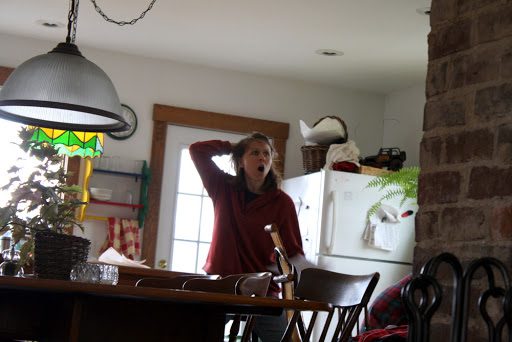 My son just giggled and took a million and a half pictures.

Sunday came and we all raced around like mad to get to church early so we’d have time to figure out the mics and run through it a couple more times. From his seat in the back of the van, my son recited his lines to us, ee-nun-cee-atinG all the while.

He knew the whole piece by heart, but I let him read it for the actual performance. It only made sense, considering that the whole premise was that he/Paul was working on his letter to the Corinthians… 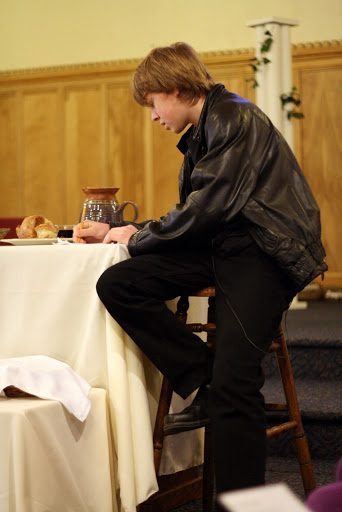 …when he happened to notice that there were a couple hundred people watching him work (because it’s perfectly normal for writers to look up from their toil to see a mass of humanity staring at them) and so, quite logically, decided to read his rough draft to the congregation:

“But wait! I shall put it to you, these words I have writ, and you shall see for yourselves that of which I speak and why I am of such a rumple. [straightening papers, clearing throat] The words may be much scrambled yet, but pay no mind.”

“…that the Lord Jesus, the same night in which he was betrayed most vilely—[to congregation, angrily] that moldy rogue, I can not bear to think on it!—[reading] the Lord Jesus took the bread…”

And… “Wherefore, whosoever shall eat this bread and drink this cup of the Lord unworthily, [raking hands through hair] shall be guilty of the body and blood of the Lord. [to congregation] This horrid image doth unfix my hair! [reading] But let a man examine himself, [fist to chest] gaze upon the stygian night of his soul, and so let him eat of that bread and drink of that cup.” 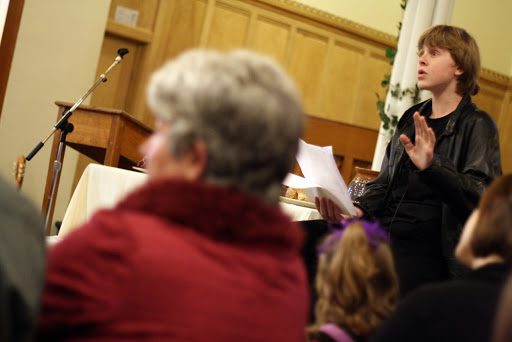 And then, just like that, it was over. Now I no longer need to spend an hour of each day yelling at my kid to speakkkk cleearleee.

Credits:
Listening to, and understanding, Shakespearean English is completely different from creating it. Completely. If it weren’t for a couple Shakespeare-(and drama)-savvy friends, the Shakespeare insult generator, my mom, an old Shakespeare textbook from my grandfather, and several different translations of the Bible, I probably would’ve given up all together.

The first three, and the last two, photos were taken by our friend Steven Johnson. (Stupid Jennifer Move: when I handed him my camera, a camera that he advised me to purchase because it’s the one he uses in the college classes he teaches, I gave him instructions. The audacity! The nerve! The outrageous ridiculousness! He just smiled, bless his heart. And then he cleaned my camera lens before using it because he knows what he’s doing.)