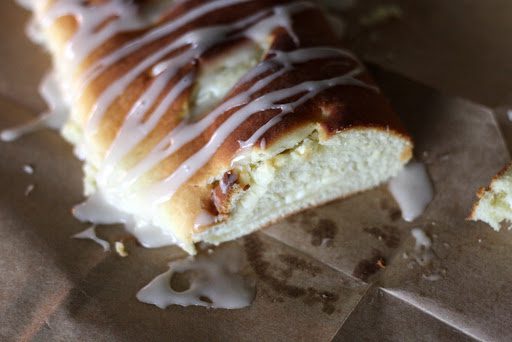 It’s 1:14 in the afternoon and I’m still in my pajamas. But. The kids are done with their lessons, two baking experiments are completed, and the granola is in the oven. Whoever said daytime clothes were necessary for productivity anyway?

Have you noticed that blogger now lets us talk to each other in the comments? Yes? When my friend shot me an email informing me of the improvement, I about levitated out of my seat with excitement. The only reason I ever considered switching host sites was so I could have that little, super cool “reply” button after each comment. I hated having to respond to a particular question three or four comments later—so much momentum got lost. But now I’m battling the urge to respond to every single comment! It’s hard, but I’ll do my best not to. I figure I’ve held forth enough in the post—the comments are your turn to pontificate. (But I’ll still chime in here and there. That reply button is too shiny to resist.)

I thought I’d tell you about the chipotle chicken dinner I made for supper last night, but then we had some of the leftovers at lunch and I decided it wasn’t thrilling enough to share. And now that I’m slowly plowing through my enormous new bread book, I’m going to have oodles of bread recipes to pass on. However, I need to bake several before I start yapping—get a handle on Clayton’s approach and develop a taste (literally) for his style, etc. Also, I still want to tell you about garden steaks, but just not today.

I know! I’ll tell you about the braids that I made for a church breakfast and then again, just for us. This recipe comes from my sister-in-law Kate, the same lady who changed my life, or at least my take on the ‘lada experience, with her cheesy beef enchiladas. (Try them, people. You will be slayed.) 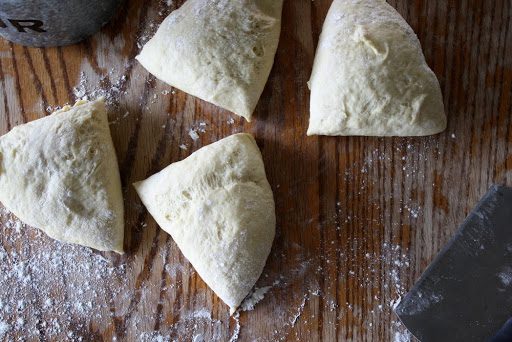 She made the braids for us, years and years and years ago, and of course I begged the recipe and made them for myself once or twice, if my memory serves me correctly. But years and years and years went by and I did not make them. Then, with a church breakfast nigh upon us, I decided that the braids were the only possible thing I could make. (One might say I was “fixating.”) I searched high and low, but the recipe had either evaporated or disintegrated. So I emailed Kate. The subject line said “help” in all caps, followed by three vigorous exclamations points—one excited, one demanding, and one desperate. 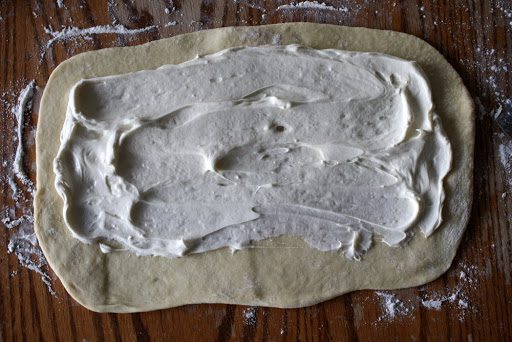 My long-suffering (she has eight younger siblings, seven of which are boys), sweet, patient sister-in-law emailed me right back with the recipe. (Those adjectives I used to describe her? It’s kind of funny, but I’d never in a million years pick them to describe my husband her brother. Siblings—they’re such wildcards.) 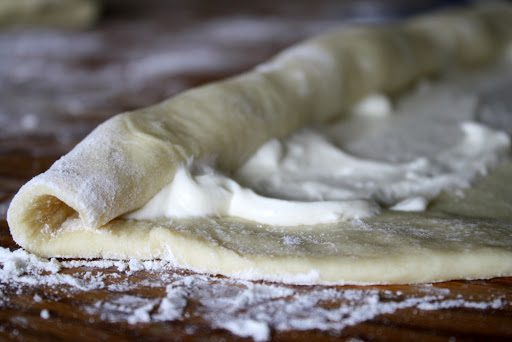 (Mmm, and I guess he’s long-suffering, too, considering he’s married to me.) 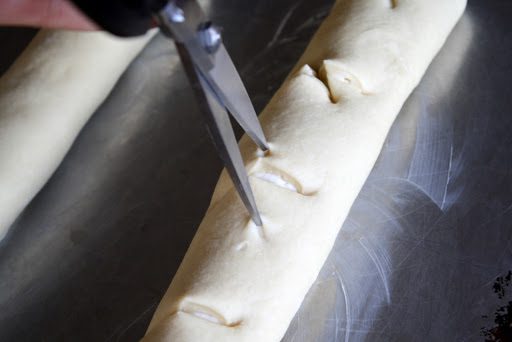 The title of this delectable treat is misleading—no braiding is involved. The four loaves are shaped just like a sweet roll, but with a cream cheese, sugar, vanilla, and egg filling instead of butter, brown sugar, and cinnamon. The rolled dough gets knife (or scissor) X’s cut into the top, and the vanilla glaze, drizzle-slashed across the still-warm loaves, helps to perpetuate the braid myth. 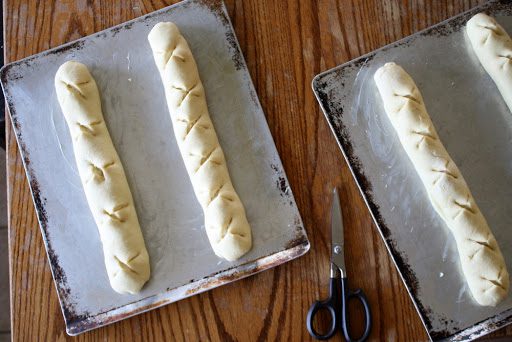 A word about the dough. This is no ordinary dough. It is super rich. Insanely rich. Along with the four cups of white flour, there are two eggs, a whole cup of sour cream, a half cup of sugar, and a stick of butter. Oof, I feel guilty just typing that. 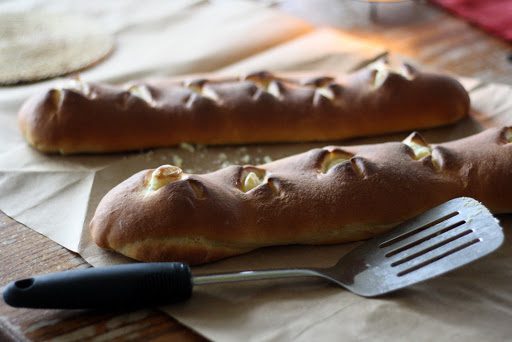 But darlings, the loaves are like candy! Impossibly soft and creamy and profoundly addicting, especially when still slightly warm. I can devour a good third of one loaf without even batting an eye. In my email back to Kate (after the initial “THANK YOU! THANK YOU! THANK YOU!” upon receiving the recipe), I said only this: “Better than I remembered. To die for.” 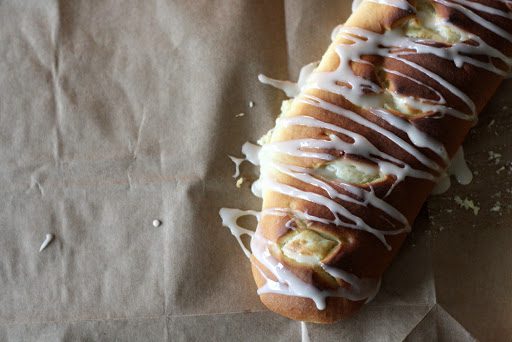 Take it from here, peeps. You know what to do. 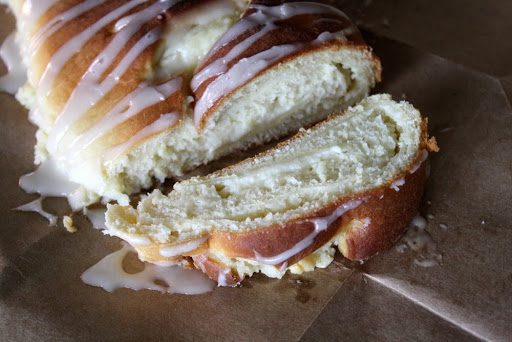 The little clock in the bottom corner of my computer screen is informing me that it’s now 2:01 pm. I’d best go get dressed. Happy Friday!

These loaves are like a tender cheese Danish, but in, well, in loaf form. I added some cranberry sauce to a couple of the loaves, and that was swell. Other ideas for filling additions that have flitted across my mind’s dashboard include: chocolate chips, lemon or orange zest, sour cherry pie filling, and red raspberries. However, the loaves straight up are super classy. There’s really no need to fiddle.

Whisk together the sour cream, melted butter, sugar, and salt.

In a small bowl, combine the yeast and warm water.

Stir together the sour cream mixture, the dissolved yeast, the flour, and the eggs. Knead for a few brief minutes before placing in a floured bowl and covering tightly with plastic. (At this point, the dough can be placed in the fridge for 6-12 hours before continuing.)

Cream together the cream cheese and sugar. Beat in the egg and vanilla.

to assemble:
Divide the dough into fourths. On a well-floured surface, roll one of the pieces of dough into a rectangle measuring about 8×12 inches. Plop 1/4th of the cream cheese mixture into the middle and spread evenly, leaving a 1-inch border at the top and sides and about 2 inches at the bottom. Starting from the top, roll the dough towards you. Pinch and tuck the ends together and place the loaf on a greased baking sheet. Repeat with the remaining pieces of dough.

Using kitchen shears or a knife, cut six X’s in the top of each loaf. Cover and let rise for 30-45 minutes.

Bake the loaves at 375 degrees for 15-20 minutes. They will get very dark, but as long as they don’t burn, they’re fine. Cool on torn-open brown paper bags or a cooling rack. (They will sink into themselves as they cool. Don’t worry—it’s all good.) Drizzle with glaze while still warm.

Combine and drizzle on loaves. Or, if not using right away, refrigerate.

To freeze: wrap unglazed loaves in plastic and freeze. (They are very soft, so place on a tray so they keep their shape in the freezer.) To serve, thaw at room temperature. Glaze immediately prior to eating.