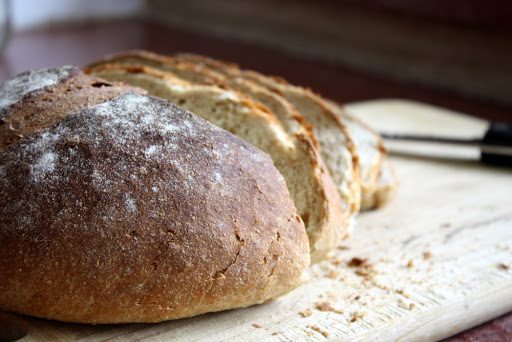 I was recently—as in yesterday—pointed in the direction of a series newly available for streaming on netflix. Four products get manufactured in each episode of How it’s Made. It’s utterly fascinating, and the kids and I now boast a two-day-old ritual of watching one episode after lunch, like an informational dessert. And then the kids watch it again in the evening because they just have to show their papa.

Yesterday, we witnessed the production of tinfoil, contact lenses, bread, and snow boards. Today, it was CDs, pantyhose, mozzarella cheese, and florescent lights.

That factory bread bothered me. The voice over dude called it a multigrain bread, but it was as white as a sheet of paper. I was all like, Are you kidding me? and Where in the bloomin’ world do they get off calling THAT pasty stuff multigrain? Get OUT.

Maybe it was a mixture of many glorious grains THAT JUST HAPPENED TO HAVE THE LIVING DAYLIGHTS, COLOR, AND TEXTURE BLEACHED, PRESSED, AND PROCESSED OUT OF THEM. I really have no idea. So, you know, whatever.

But those plastic bags of nutritious bread wannabees got me to lusting after real multigrain bread—soft bread flecked with bits of germ and tasting of a whole slew of grains. So I took Bernard Clayton’s (I’m loving this new book) Cuban bread—an all-white (oops, I’m guilty), chewy-sweet affair that I’d already made a couple times—and bastardized it into something much more hippie and wholesome and mother earthy-like.

I sure showed them. Take THAT, you smarty pants factory. All your bells and whistles and you STILL can’t hit the mark, ha! 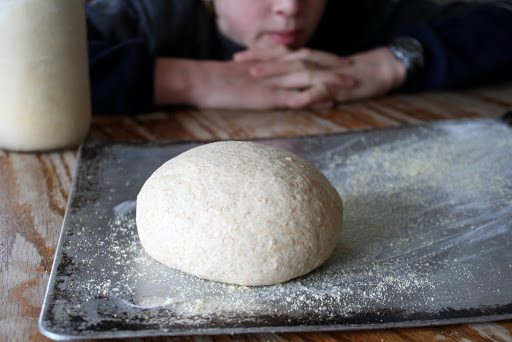 However, grainy loveliness aside, what’s so intriguing about this bread is the process. It’s fast, as in blink-your-eyes-once-and-you’re-done fast. 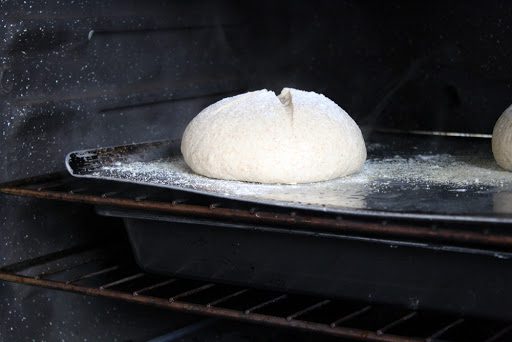 The steps are as follows:

a. mix up the dough
b. let it rise
c. shape it
d. set a pan of boiling water on the bottom oven rack
e. put the bread in the cold oven and turn it on to 400 degrees

Forty minutes later, you have yourself two gorgeous, crackling boules cooling on the kitchen table. Amen, hallelujah, and pass the butter. From start to finish, it takes no more than two hours. 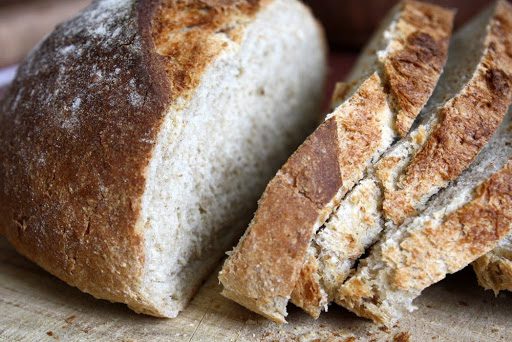 It’s so good, it disappears right speedy quick, too. 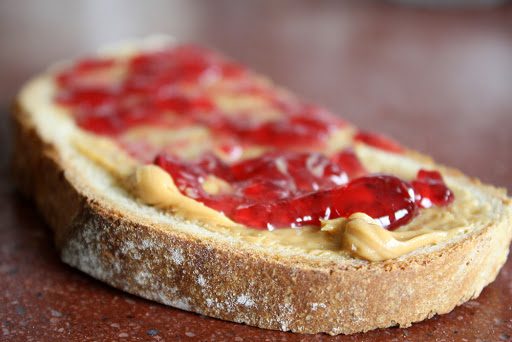 My family can put away both loaves at one meal, no problem. 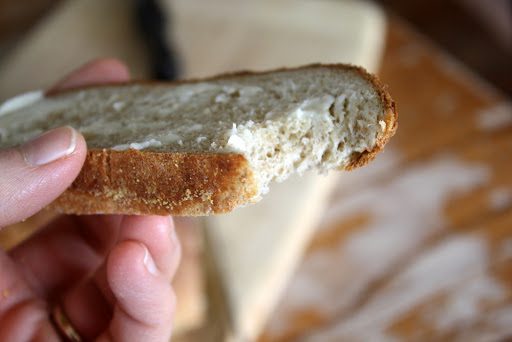 Mix together all of the ingredients—except for one of the cups of the white flour. Once well combined, add the remaining flour. Knead for 3-5 minutes. Set the dough in a lightly oiled bowl. Cover and let rise until doubled, about one hour.

Fill your tea kettle with water and bring to a boil.

While the water is coming to a boil, turn the dough out on to a floured surface. Cut in two pieces and shape into round boules (or long loaves, if you prefer). Place the boules on a buttered baking sheet that’s been lightly sprinkled with cornmeal. Dust the loaves with flour. Using a knife, slash an X in the top of each loaf.

Pour the boiling water into a baking pan and set it on the bottom rack of the oven. Place the bread on the rack above it. Close the oven door and turn the oven to 400 degrees. After 30 minutes, rotate the pan and bake for 10 more minutes, or until the loaves are burnished and crusty.

Multigrain Flour Mix
From Good to the Grain by Kim Boyce

Once you start adding this mix to your baked goods, you’ll want to make everything multigrain, so I highly recommend doubling, tripling, or even quadrupling this recipe. It adds a sweetness and flavor that plain old whole wheat does not have. I guess that’s the point.

Pack into glass jars and store in the freezer.