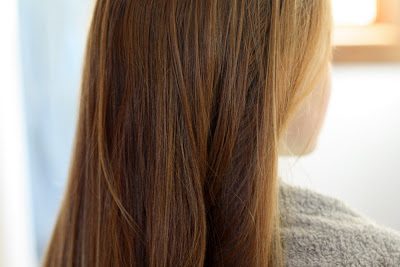 It’d been taking my daughter forever and a half to comb her hair in the morning. She’d walk around with a brush in her hand, half-heartedly thwacking at her mane every now and then, and almost every morning I’d end up yelling at her to “Get in the bathroom, shut the door, and do not come out until your hair is brushed!” So when she started making noises about perhaps wanting to cut her hair, I was thrilled.

A couple days ago, my brother and his friend and I got to talking about hair, and Locks of Love came up. “That’s it!” I shouted. “I never thought of that! She’ll love the idea!” I scurried over to the computer to do a little research, and when my daughter came home from a trip to town with her papa, I explained all about Locks of Love. She jumped right on board. (Interesting fact: did you know that 80% of donations come from children wanting to help other children?)

First, I washed her hair in the sink and then blew it dry. She tossed her hair about like in the shampoo commercials she doesn’t see. 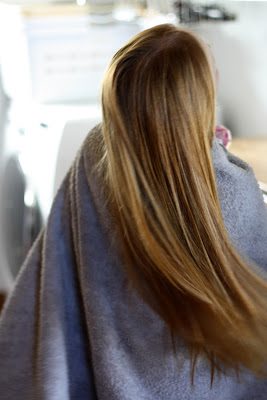 I pulled her silky-smooth (and suddenly painfully beautiful) tresses back into a ponytail, braided it, and tied off the end.

Hair donations are supposed to be a minimum of ten inches—we were cutting more than twelve. 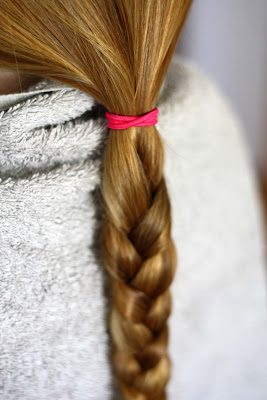 I measured once, measured twice. Giggling giddily, we admired, touched, and mourned her hair. And then I picked up the scissors and started snipping. At first, they didn’t make a dent, but then I figured out how to use just the point to take little cuts and soon the braid started to come free.

Right in the middle of all that snipping, my husband came inside. He stood in the door, his eyes wide. “You mean you were going to cut it without calling me in to watch?”

And then her short, choppy hair was swirling around her face, and I was holding a strawberry-blond braid in my hands. I stared at it, semi-shocked at what I had done, tears filling my eyes. I felt like I had just cut off my child’s arm. 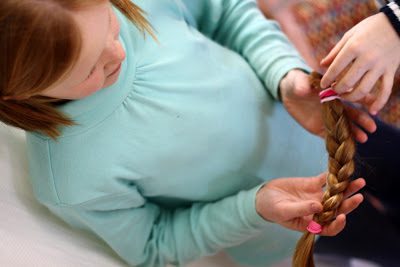 I watched her closely, waiting for the hot tears of remorse, but they never came. She kept ruffling the back of her hair with her hand and tossing her head from side to side, saying “It’s so light!” 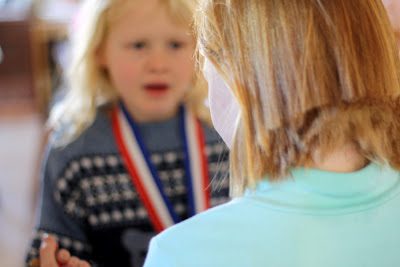 I’d never hacked off a ponytail before, so I didn’t know what it would look like. The sides swooped down long around her face, while the hair went up in the back, stacked-fashion. 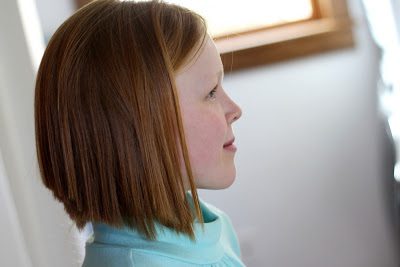 We quickly discovered it was too short for a ponytail—her one, very clear specification, oops—but I showed her how we could pull back the top to keep it out of her eyes, and she was satisfied.

We put the braid in a zip-lock bag, wrote her name and address on a piece of paper (so she’ll get an official acknowledgment from Locks of Love) and made a quick trip to our local post office where we bought a padded envelop (according to the instructions), and sent her hair on its merry way to Florida. 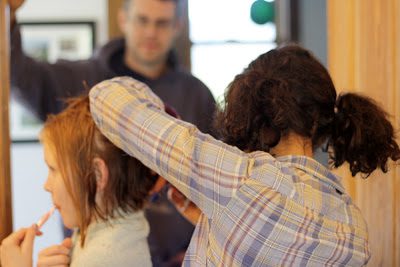 Back home, my brother’s friend (her hairdo courtesy of my other daughter) and I tried to smooth out the sawed-off appearance, but we quickly gave up—it was way beyond our abilities.

For a while I kept suggesting we take her to a professional to get it fixed, but then I stopped talking about that, too. 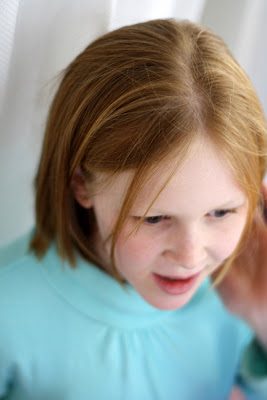 My daughter loves her new chopped locks. And besides, hair grows.