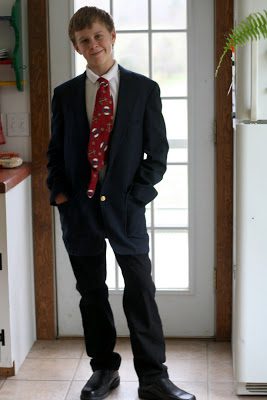 We did, indeed, get to see Hamlet three ways this fall, funfunfun. On Friday, the kids and I hopped into the car and sped down the interstate to the Blackfriars Playhouse, raucously singing along to the songs on my son’s MP3 player (that he piped through the car’s speakers)—Peter, Paul, and Mary, Beethoven’s Wig, My Fair Lady, The Sound of Music, etc.

We were scheduled to arrive 75 minutes before the show because, not only were we going to watch the show, we were going to usher for it, too. Because—get this!—as new members of the volunteer usher brute squad, we get to see the shows for freeeeeee!

Since my son is 6 years shy of 18, the minimum age for ushers, they are graciously allowing us to usher as a team. Though judging by the size of his shoes (mens 10 ½, yikes) he might look the part a little sooner than is normal.

Not his ushering uniform. He was dressing up for fun and asked me to take a picture.

Notice I did not say “act the part.” 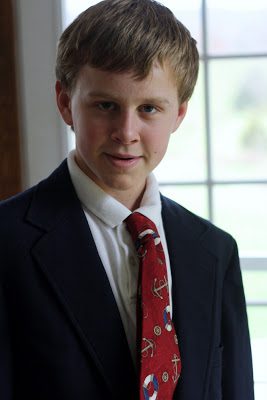 We attended an usher training where we learned about patrolling for photography (which led to an interesting discussion on the ride home about how actors are their art), checking bathrooms, our dress code, putting up seat backs, and handing out programs.

The really good news about this whole arrangement is that we get one comp ticket each time we usher, which means my daughter can come along and watch with us! (Or, we can save up comp tickets and take the whole family.)

Friday was our first time on the job. My son and I were assigned the balcony, and my daughter sat in a corner and knitted while we stood there and tried not to get too bored. Once the show started, I let the kids sit up closer while I stayed back by the door. It was a simple job (thank goodness I didn’t have to approach any patrons about photography usage—confrontations with strangers makes me a wee bit nervous), and we were able to watch the whole show. We are signed up to usher for this week’s closing show of The Importance of Being Ernest, and then there will be A Christmas Carol—I expect we’ll usher for that show more than once in order to get some extra comp tickets saved up, and because it’s the sort of show that we’ll want to see over and over again. 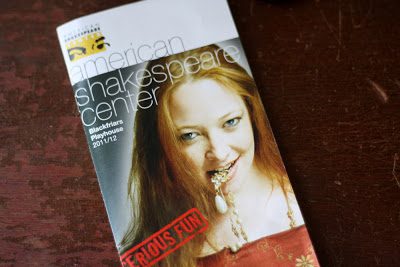 The downside of volunteer ushering is that we don’t get the best seats (though comp ticket holders can reserve any seat in the house, from what I understand), and I’m a big fan of sitting close enough to see the sweat fly. Plus, there’s the fifty-minute drive each way and the late bedtimes.

But there are so many upsides—exposure to theater culture and etiquette, learning to be professionally hospitable and gracious, the incredible shows—that I’m not even about to complain. No, no, quite the contrary—I’m tickled hot pink over our newest adventure.