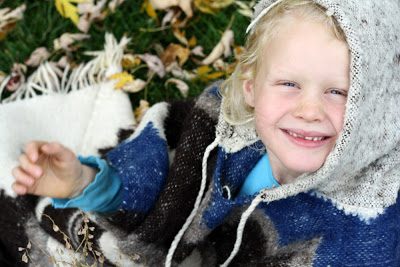 The wind was blowing, the leaves were falling, and I had just read a post about using a fan to boost the interest factor when taking pictures. So I grabbed my youngest daughter. “Hey, I’ll give you a piece of candy if you come outside and let me take pictures of you,” I said. She jumped at the chance to earn a piece of yucky hard candy and hurried to throw on my Guatemalan poncho.

Then she just sat there while I took pictures to my heart’s content.

Why did I not think of bribery before? 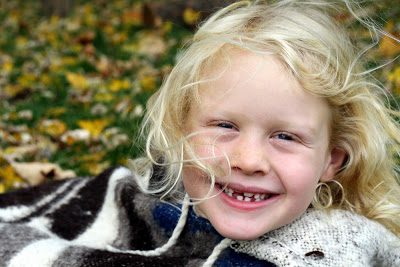 We’d hear the breeze roaring through the trees down across the road, and I’d ready my camera.

She’d lift her chin and face the wind. 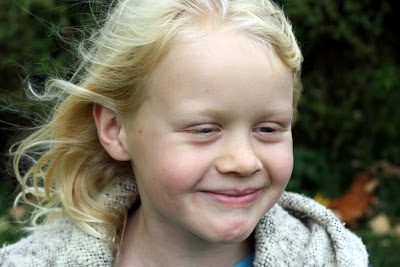 And then she’d start to smile. 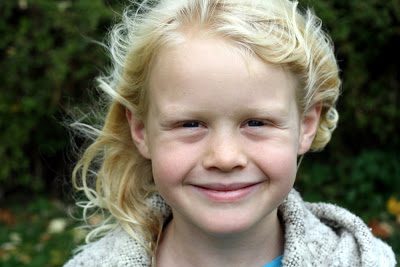 “Feel the wind!” I yelled, and she grinned harder.

“Come on. Smile bigger! Show me your teeth!” And so I got this: 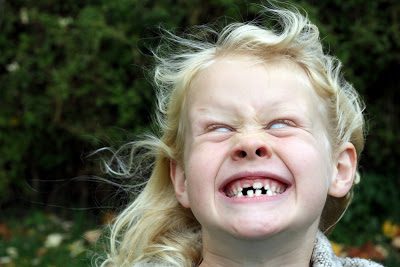 This little girl is a work of art, let me tell you. She goes through spells where she’s highly irritable, spitting venom with every breath, defiant and argumentative. After one particularly bad day, or series of days, rather, I said to her, “You’ve been having a hard time lately, haven’t you?”

She nodded sullenly, and I said, “What should we do when you get like that? Do you need to go outside and play? Snuggle with me? Be alone in your room? What helps, huh?”

“Listening to music,” she said, quick as a wink. 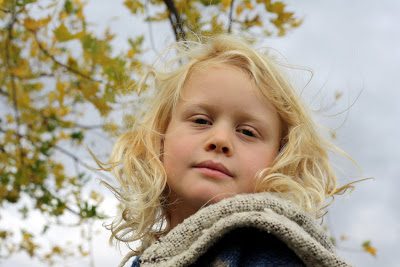 And it’s true, the girl loves music. She will listen to tapes for hours on end. She picks out melodies on the piano. She loves the songs from My Fair Lady and The Sound of Music. Music feeds and soothes her. 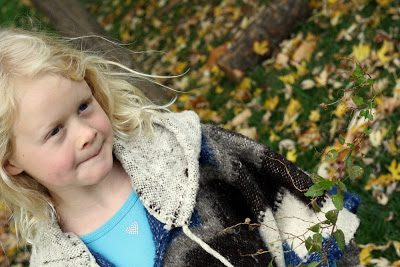 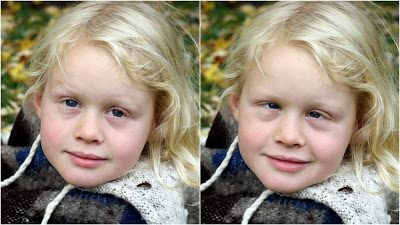 I also need to ponder why it is that at our all saints’ day church service, she lit a candle, not for her dear friend’s deceased father or her great grandmother, but for Sally, her big sister’s dead guinea pig. It added an element of hilarity to an otherwise somber service. 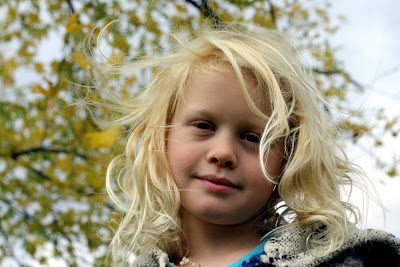 And I need to ponder how it is she managed to get such gorgeous golden ringlets. The girl has no idea how lucky she is. And the curls will probably all disappear with puberty, or, if not puberty, then with childbirth. My hair used to be stick-straight, but then I had kids. Same things with my complexion: it used to be creamy smooth…until I had kids. Having kids has changed me from the inside out. 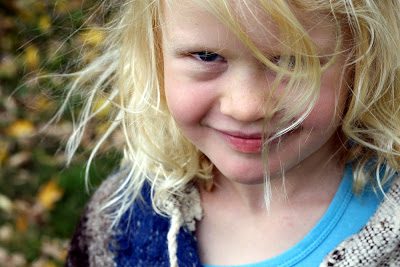 It’s been totally worth it.

When my older daughter caught on that her sister was posing for candy, she demanded her turn. 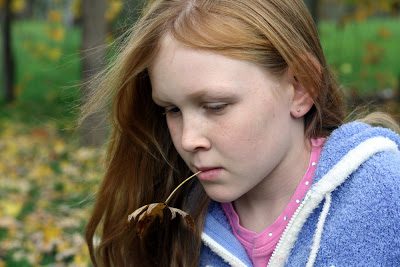 Or maybe I asked her, I forget which. In either case, she was eager to oblige.

Candy is a tool that must not be underestimated! 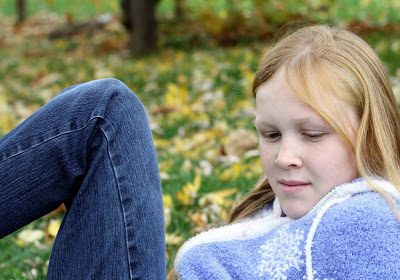 This girl will be a teenager all too soon. When my husband saw this picture (a pose she pulled off all on her own), he actually gasped, “Teenager! She looks like a teenager!”

She’s starting the bursting-into-tears-at-the-drop-of-a-hat thing. (Door slamming was already commonplace.) She likes to attach an old portable phone to her jeans, put on the headphone/mouthpiece thingy, and sashay around the house talking valley girlese. It drives her father batty. In fact, just the other night he roared, “Don’t talk like that! I can’t stand it! It makes you sound … dumb!”

He’s never one to mince words (he once mentioned that a soup we were eating at a friends’ house tasted “moldy”—he has yet to live that one down), but his outburst didn’t slow our girl down, oh no. She just went up to him and yakked louder. 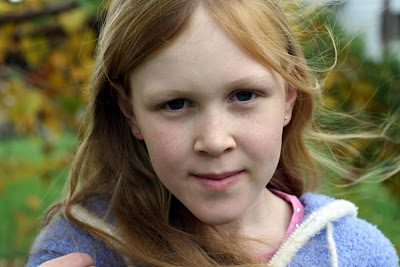 Seriously, this girl doesn’t stop talking. Her mouth goes and goes and goesandgoesandgoes. At least a half dozen times each day I find myself squeezing my eyes shut and screeching, “Do not say another word!”

Such theatrics buy me approximately 8.5 seconds of silence. It’s a losing battle. 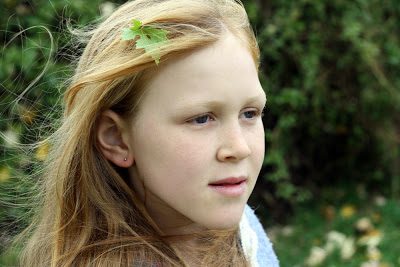 See how her chin is lifted here? It’s how she goes through life, kind of rammy. She’s a lot like her father. He gets her. Which is good, because, well, lets just say, I love her to smithereens, and I respect her and adore her and think she’s the bomb, but I don’t get her. 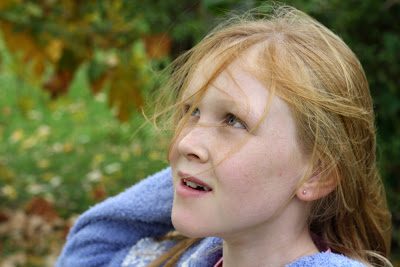 This is what’s so amazing and unique and strange about raising children. They are people. I mean, duh, right? But no, really! These children, these people who came from me, exhibit behaviors and thinking patterns and tendencies that are so completely not me. It’s fascinating, challenging, intriguing, invigorating, and baffling. 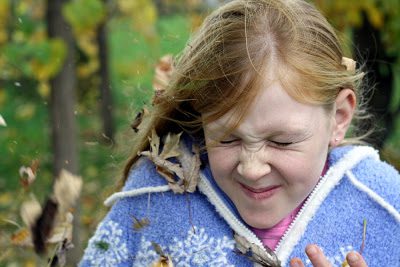 Partway through the wind and her brother throwing rakefulls of leaves on her, my girl, ever the resourceful one, plucked a long green grass and tied her hair back. 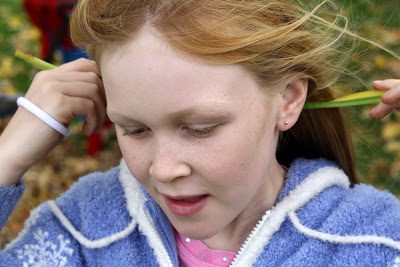 And then when I told her to kneel, because I wanted to shoot some from-above pictures, she went all devout on me. 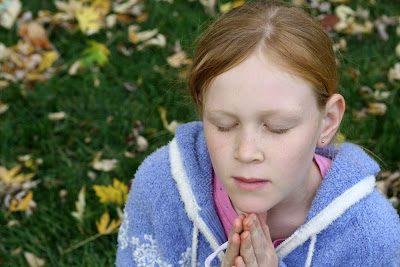 I never even got around to playing with the settings on my camera. But after last night’s traipse around town, I have enough candy to fuel a gazillion photo shoots, so I’m not worried. 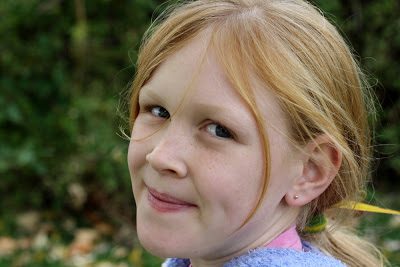