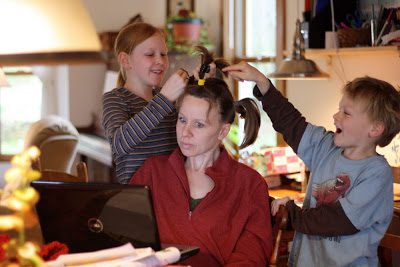 **It’s raining. Lamps are on, candles are burning. There will be a fire later (the temperature is dropping).

**My second and fourth children are Doing My Hair. Lots of brushing, braids, and clips. There was even a scrunchy stuck round my nose.

**The dishes need to be washed. I have baking projects and some little Christmas gifts up my sleeve. Maybe after my salon appointment is over?

**The other night I woke up. I woke up because Sweetsie was standing at the foot of our bed. (It was either the second or third time that night, it’s all a blur now.)

My husband growled, “Go back to bed.” (He’s completely uncivil in the middle of the night.)

Undeterred, she continued to stand there, sucking her thumb and breathing heavily.

“What do you need, sweetie?” I asked.

Her reply came as clear as an out-of-tune bell, “I’m waiting for my instructions.”

I punched my husband. “She’s sleeping, hon. Take her back to bed.” 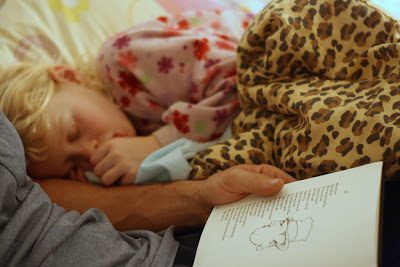 **All this rough sleeping makes for a very tired girl at the end of the day. 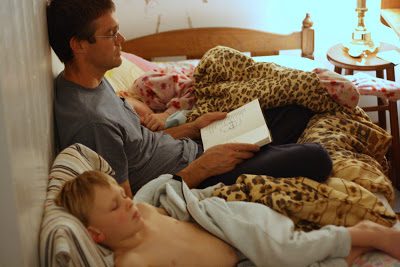 It had been quiet for a long time before I finally went in to investigate.

And a very tired papa. Little brother, too. Heck, it’s bedtime—we should all be tired.

**I stayed up, foolish woman I am, and watched The Knit Witch on youtube. You guys are right: she’s awesome.

Now it is later. The kids are in rest time (except for a daughter that’s downstairs collecting tape and paper) (and except for a son who is downstairs looking for his leftover school work).

The childrens (that is not a typo) spent the morning making cards for a friend, and Christmas paper chains that look more like Easter paper chains.

As for me, I made peppermint lip balm and felt all sorts of mother earthy. 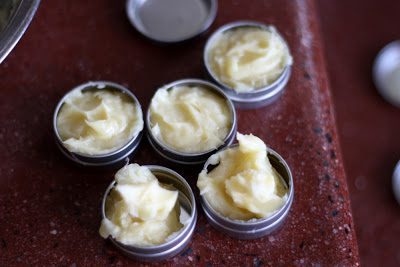 I made this recipe last year but I didn’t follow the instructions to stir until thick, so my balm separated into a waxy top layer and a honey bottom layer. (I’ve been using it all year anyway, despite the over-waxiness.) My failure didn’t stop me from thinking ahead and ordering little lip balm tins for this year.  I’m so glad I did, as having them ready to go made it that much easier to jump into the project.

It’s really quite simple. Just melt the ingredients together, stir while cooling, and then fill the tins. 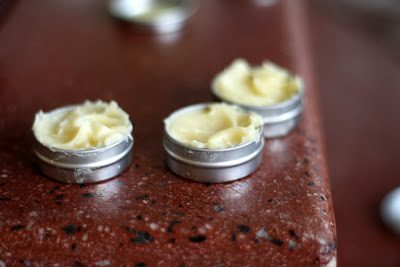 I’ll be giving these away as little gifts…maybe. So perhaps it’s foolish to go writing about it here on the blog where everyone can see it? Way to be all hush-hush secretive, Self. But that’s where a no-one-reads-this-blog-anyway mentality comes in handy—all I have to do is tell myself that no one actually reads anyway, so I can get away with saying whatever I want. Illogical, but true.

The REAL reason I’m writing about the balm is because I thought you might like to give this balm a whirl yourself. (The OTHER real reason is that I can’t resist showing off a little: Look at me! I’m going all down, down, down-to-earth, rah, rah, rah!)

What’s that you say? You have no cute little tins on hand? No problem. Just dump all the balm into a mug, stick it in the bathroom cabinet, and apply liberally every time you make a trip to the loo. Do this and you’ll be sure-fire guaranteed to have shiny smooth lips till kingdom come. 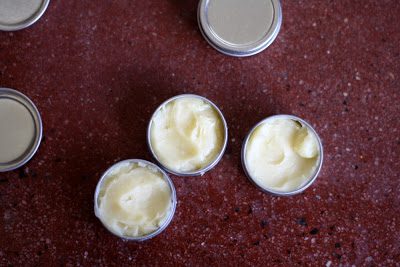 Put the coconut oil, beeswax, and honey in the top part of a double boiler (I used a little metal bowl on top, for easier clean up) filled with simmering water. Stir occasionally until everything is melted and runny (it takes about 15 minutes).

Remove the bowl from the top of the double boiler and stir in the peppermint oil. Set the bowl in a large pan of cold water and stir until thick and creamy (but not solid hard—you still need to fill the containers, remember). (Actually, the cold water might not be necessary. I tried it that way, and the balm on the edges of the bowl kept getting hard really fast. Just stirring it at room temperature might be good enough.)

This same time, years previous: Smashing for Pretty opens (and now we’re closing – check out the 20 percent off sales!)