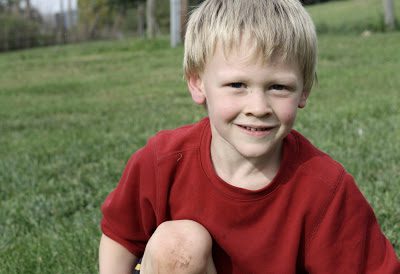 I am not a storyteller. I do not regale my children with enchanting tales that have a beginning, middle, and end. Rather, I am more of a conversationalist and lecturer. If something happens to me and I want to tell someone else about it, I regurgitate it all, in a rush, splat. There is no weaving, no crafting, no plotting. Therefore, it is a rather odd coincidence that I have fallen into the habit of telling my baby a story every night before bed.

It came about quite by accident. One night when I went upstairs to tuck the kids in to bed, my littlest grabbed me with his big blue eyes and said, all sweet-like and pleading, “Mama, tell me a story about when you were little.”

So I told him about the time when my dad woke me up in the middle of the night but it didn’t seem like the middle of the night because everything was lit up with a weird yellow-orange light because a gas line had exploded a few miles away. It felt like the whole town was out and about, and we walked around talking with the neighbors just like Atticus and Scout and Jem did when Miss Maudie’s house burned down (though I didn’t include that last part in my story).

And wouldn’t you know, that pleading question is now the first thing he says to me every night when I walk into his room. So I curl up on the bed beside him and rack my memory for something interesting. As I start to talk, his breathing slows and his body stills. His eyes fix on my face, and he listens for all he’s worth. I can actually see him listening. When I finish—and the stories are no more than a minute or two long—he smiles, sucks in a big breath like he’s coming up for air, and giggles. He always, always begs for one more story.

A week or so into our new routine, he asked me to retell a specific story. “The second one you told me,” he said. I was surprised. Was he keeping a mental list of the stories I told? I asked him to recount the ones I’d told him, and sure enough, he could correctly identify story one, two, three, four, etc. I was impressed. For whatever reason, these random memories I’m dredging up to appease him with are sticking in his noggin. 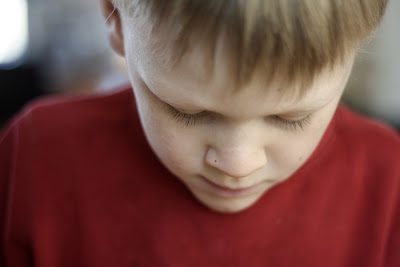 I doubt he could keep the stories in order anymore, though, there have been so many. Usually they’re just bits and pieces of my past, like the time one of our rabbits chewed off my Barbie’s hand, or the one about how I put our neighbor’s chubby dog on an aggressive keep-up-with-me-while-I-ride-my-bike-around-town fitness plan when I was just supposed to be taking it for a little walk every day, or the time bear tracks were found in the swamp below where I waited for the bus on dark school mornings and how I was too scared to go to the bus stop by myself anymore. Others are more well-rounded stories, like when my dad chased the joyriders out of the creek, or when one of our rabbits abandoned her litter and we tried to keep the bunnies alive in the oven (total fail). In every single case, no matter how fragmented the memory, he acts like I just gave him a piece of the moon. Which makes me wonder: is story telling more than just the sum of its parts?

In any case, I’m slowly, very slowly, beginning to see this new ritual as an opportunity and not a chore, and sometimes (but not often enough) I think about the story ahead of time. Once in a great while there’s even a beginning, a middle, and an end.