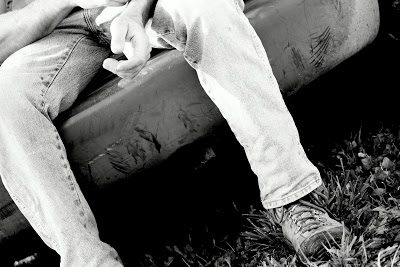 After reading yesterday’s post, my husband shook his head and said with a sigh, “I never did understand kids who played with things how they were intended. I certainly never did.” (Thus confirming my suspicions that my kids get their out-of-the-box thinking from him.)

“My brothers and I used to play smash-up derby with our matchbox cars,” he said, chuckling. “You know, making two cars have a head-on collision. But,” and here the chuckle turned to a full throated roar of laughter, “it wasn’t good enough to just smash them together like that, so we threw them as hard as we could against the concrete wall. Smash-up derby, ha!” We were both bent double, slapping our knees.

Once we regained composure, he picked up his book and headed over to the sofa. “We used to have something like a hundred matchbox cars…”

Thankfully, my kids weren’t present for the telling of that tale. I wouldn’t want them to get any (more) ideas.

One of our chickens died. It was an old biddy—we have a bunch of them and they’ve been slowly dying off. It always makes me happy when a kid reports that another chicken bit the dust. One less beak to feed, I reason.

My husband buried this latest fatality, and several days later the dog dug it up and drug it all over the property.

Newsflash: three-day-old, half-decomposed dead chicken does not smell like roses.

And then my husband drove over the carcass. He thought his wheel was slipping on wet leaves, but it was really dead chicken.

My husband was in a hurry to get back to work, so he paid the girls to rebury the smoosh. But still, the stench lingered.

A little later when I went outside in search of some fresh air and steadying, hands-in-the-dirt work (I was flipping out at my kids way too much), I kept catching whiffs of mashed chicken. My stomach actually heaved.

Romantic notions about country living are just that, notions.

My husband fell off a roof yesterday.

He came home after work and said jovially, “Well, I had a little adventure today!”

“Yep. See if you can guess what happened.”

I paused and looked at him. Hard. There was something funny about the way he was smiling and the sheepish air about him, and then it hit me—

“No! Don’t tell me this stuff! I don’t want to knooooow!” It made no difference that he was standing in front of me, happy, healthy, and whole. The back of my neck tingled and tears pricked my eyes. I set down the container of chili powder and gave him a bear hug.

“Don’t dooo that,” I scolded, as though he had fallen off the roof just for the heck of it.

He had been working on an old metal roof. His foot slipped on some green fungus and off the roof he went, scrabbling and grasping all the way. He landed on the gravel in a Spiderman-like crouch. And he’s fine.

It’s the first time he’s ever fallen off a roof. I hope it’s the last.

This same time, years previous: and the fort goes up (Just re-read it and what I noticed was my baby’s fine, white hair. Gave me a heart-pang.)