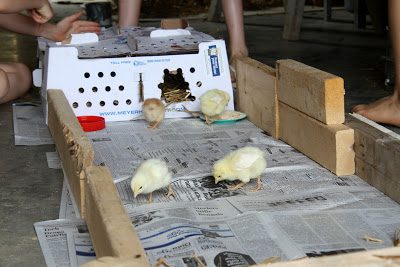 Yesterday you left me a sweet comment in which you called my children “creative” and “ingenious” and then bemoaned your propensity to squash your own children’s creative endeavors. You finished up by saying, “Obviously chores still need to be done and part of our job is to teach our children to focus & finish what they started. How do you teach that and still allow room for ideas & experimenting & creativity?”

But hey! Whaddaya know, the answer is playing out right this very minute. Let me walk you through it.

*The kids are in rest time.
*I am sitting on the sofa drinking coffee and typing as fast as I can.
*Not too long ago, my youngest son tiptoed into the room and snuck a pair of scissors off the art table.
*I pretended not to see him.
*I’ve been listening to the sound of packing tape being ripped off its roll ever since.
*It’s like listening to nails on a chalkboard, only it’s ripping up my inner calm, not my eardrums. *My hackles keep jumping up and down and squealing “Mess!” “Destruction!” “Waste!”
*But then my brain shouts back, “He’s happy!” “It’s just tape!” “He’s being quiet!” “SHUT UP, YOU STUPID HACKLES!”

In fact, I’m so not supportive of their creative endeavors that they often have to sneak them. Like the other day when they threw the not-to-be-used-outside blankets out the window and fled across the yard to the clubhouse. Luck was not with them that time, for I spied them sprinting across the yard and ordered them back. Win some, lose some—choose your side.

I’ve always wished my kids were the type of kids to sit around and read books, color in the books meant for coloring, play board games according to the rules, build intricate lego towers in the room designated for lego building, and take only the toys they were going to play with out of the toy box. But it is not to be. From the get-go they’ve been toy box dumpers, wall and furniture colorers, book walkway layers, etc. In short, they’re messy. And it drives me up a wall. (I also kind of admire them for it, but let’s keep that our little secret, shall we?)

If my kids are creative, it’s not because of anything I do. More often than not, their creativity is fueled by the sense of adventure they get when they tiptoe around behind my back. Sometimes they’re outright disobedient. Other times they’re just secretive. They operate under the assumption that it’s easier to ask for forgiveness than permission. And they’re right.

Here are some examples:

1. If they had said to me, “Hey Mom, we’d like to make a little house for the chicks by cutting holes in their carrying box, making walls with scrap lumber, spread newspapers all over the floor, and then sprinkle mash everywhere,” I would’ve said no. But they did not ask and this happened.

2. If they had said to me, “Hey Mom, we’d like to use sharp tools and Papa’s stuff to build a crossbow and then park it on the porch and shoot things,” I would’ve said no. But they did not ask, and it happened. 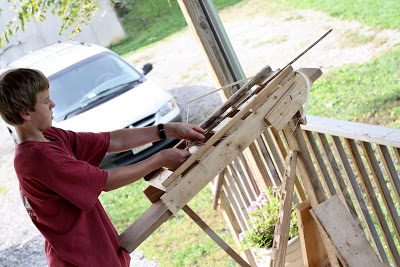 3. If they had said to me, “Hey Mom, we’d like to take the huge sheets of cardboard that are out in the barn up to our room, trace ourselves, cut our body shapes out with utility knives, and then color them,” I would’ve said no (but only to the utility knife part). But they did not ask, and it happened. 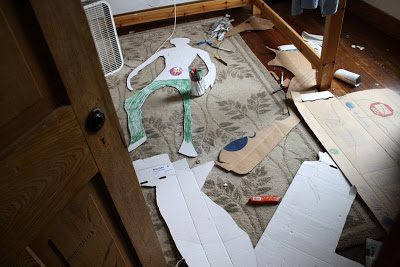 4. If they had said to me, “Hey Mom, we’d like to tip the fort over by using a rope to attach it to the mower and then pulling,” I would’ve said no. But they did not ask, and it happened. 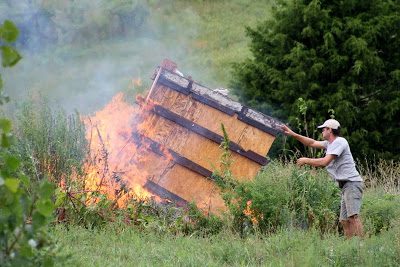 And now the fort is no more. (Hallelujah.)

5. If they had said to me, “Hey Mom, we’d like to go sit on the roof for awhile,” I would’ve said no. So they asked their papa instead. 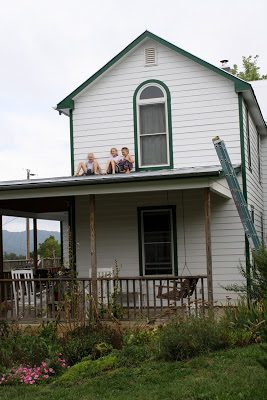 At least they asked about that.

The truth is, creativity is messy.

The truth is, there are no neat solutions for the creative mess problem.

The truth is, I am a huge stickler for getting jobs done, and for getting them done quickly. I give orders so fast my kids’ eyes cross. I set timers, get frustrated, yell, and dole out more jobs when the first ones aren’t done fast enough, etc. I’m a cross between a yapping terrier, Frank Gilbreth, and Captain Von Trapp. (He was on to something with that whistle.)

Because, truth is, once the kids are done with their studies and chores, then it’s more free time for me (and them).

Back to that raking hay chore. It was issued by The Papa, so I wasn’t really involved. However, when I realized they were poking holes through a tarp (after I had given clear instructions to not make holes in the tarp), I did deliver a long-winded lecture and have the wayward gypsychild call The Papa to get the go-ahead to proceed.

So Karen, mostly, I follow my kids around like a hawk while they’re doing the work I’ve given them and then the rest of the time I totally ignore them. Does that answer your question?

Oh yes, about all that nails-on-blackboard tape-ripping my son was doing? He made something, but I’m not sure what. 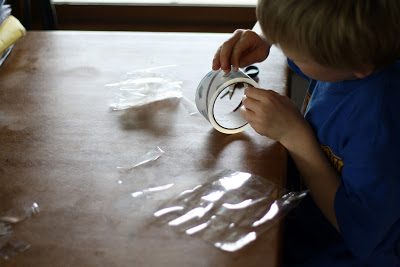 I’m pretty certain whatever it was was inspired by this creation my elder son made the day before. 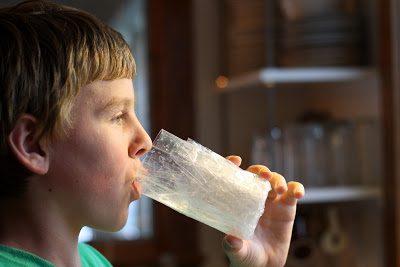 While I was writing this post, off and on because I get interrupted all the live-long day, a couple more creative endeavors sprouted.

First sprout: I asked my daughter to fetch the wheelbarrow and come haul away all the weeds I was yanking from my flower bed. It took her a good fifteen minutes to report to active duty…because she had been busy making herself a harness so she could pull the wheelbarrow instead of push it. 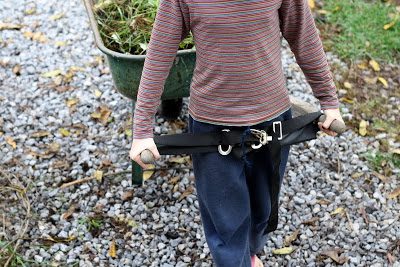 Second sprout: my son disappeared into the barn, there was lots of hammering (that I chose to ignore), and then he emerged with a mini-caravan. 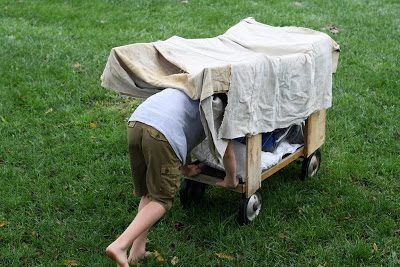 And so it goes, the chaos and creativity hand-in-hand.

this same time, years previous: another one of those homeschooling rants, puzzling it out, a milestone