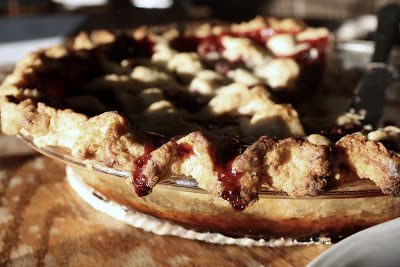 July went out in a whirlwind, the same whirlwind that August arrived on. Or “in,” not sure which.

I feel scattered, hoppy, and slightly panicked. I’m learning that I get this way whenever there’s an unknown. No matter how minor the unknown, it stresses me out and makes me feel kind of flail-y, like a drowning person. I like having a handle on things. It’s why I prefer the shallow side of the pool to the deep end.

And boy, this analogy could make a Readers Digest article, no?

I’m not going there.

I made three blackberry pies last week, and apparently, the third time’s the charm.

The kids went berry picking three times, too, and the third time (my brother took them) they saw a black bear! It beat its chest and roared and then charged them, snatched their plastic ice cream buckets right out of their hands, and commenced to filling them up with berries lickety-sizzle.

But they did see a bear and it did stand up and look around. I’m so jealous of them.

I got me two more gallons of blackberries and I didn’t even have to go anywhere. You ought-a be jealous.

It was with the second batch of berries, however, not the third, that I made the Third Time’s the Charm Blackberry Pie.

Which reminds me of the name of the huckleberry pie that I entered in a pie contest (and won) when I was a young teenager: Almost Heaven Dolly Sods Huckleberry Pie.

So in keeping with the theme of braggy pie titles, I think I’ll call this pie “Dam Good Blackberry Pie.” Get it? Get it? The berries came from a dam, see? Dang, I’m clever. (Though non-regular readers perusing my recipe index will think I can’t spell.) 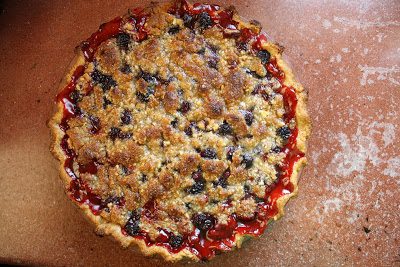 What I did not like: the filling had too many ingredients (thermflo and tapioca? Come on, that’s overkill), the filling had melted butter (again, overkill), and the filling had water (why, pray tell?). Also, I have a hard time getting my streusels all-the-way baked and this one was no exception. The underside was a little glue-y.

What I liked: the almond-oatmeal streusel had a lovely almond crunch, and the filling was tasty. 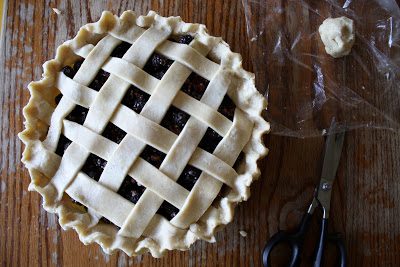 Pie Number Two: Lattice-Top Blackberry Pie
What I did not like: the filling was dry-ish, not sweet enough, and contained lemon zest (which made the already not-sweet-enough berries more bitter). Also, the cinnamon and almond extract were extemporaneous.

What I liked: the lattice top! This was my first real, true-blue lattice weave. As in I used a ruler to cut my strips and then actually wove them. I wowed myself. And have henceforth and hitherto promised that I shall forevermore top my pies with a lattice weave. It’s too much fun not to. 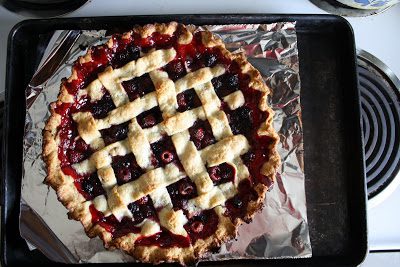 Pie Number Three: A Damn Good Blackberry Pie
What I did not like: nothing!

What I liked: everything! But most specifically, the streamlined nature of the pie (tapioca was the only thickener), that there was enough sugar, and the presence of another beautiful and momentous lattice top. It was perfect. 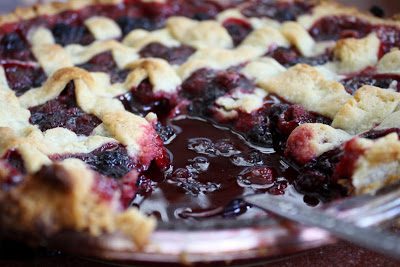 This is what happens when you cut into a still-warm blackberry pie. You get blackberry soup. Which is a never-ending puddle of temptingness because the sauce keeps oozing into the empty pan space. 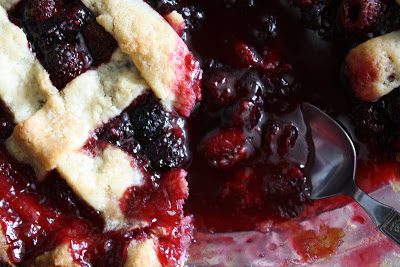 Look at that! Free refills!

So then you have to move the pie to the jelly cupboard so you’ll stop eating the pie’s insides. ‘Cause you know it will be really disappointing for the rest of the family to get served a yummy butter crust and a gorgeous lattice weave top but no filling in between the two.

A few hours in the cupboard and the pie had set up beautifully.

I photographed it and then took the photo shoot piece out to my husband, a.k.a. the grease monkey. 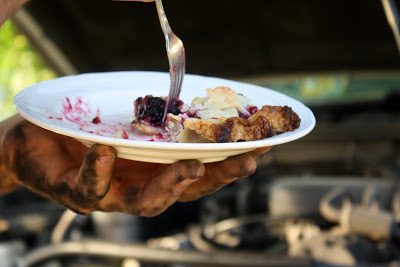 Then, of course, I had to run back inside for my camera because dirty, greased-up hands eating an ethereal pie while the sun goes down may make the best photo shoot ever, though I don’t think they tell you that in food photography school. (If people think these dirty feet are bad, then they’ll be horrified by my model’s hands. Sorry!) 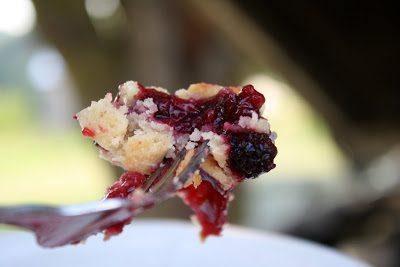 Five tablespoons of tapioca will make the filling stiff enough to slice nicely. With four tablespoons it will be a little softer, but still not runny. I think I prefer it on the softer side.

The observant among you will notice there are some red raspberries in the pie. It’s because I had a handful of them sitting on the counter so I threw them over the pie right before I put the top on.

Gently toss the blackberries, sugar, tapioca, and lemon juice together in a large bowl. Allow the mixture to rest for about 30 minutes, stirring occasionally.

Line the bottom of a 9 or 10 inch pie plate with one of the crusts, spoon in the filling, and top with a lattice weave. Bake the pie at 400 for 30 minutes before reducing the heat to 350 degrees and baking another 30 minutes. Cool for 3 to 4 hours before cutting and serving…unless you don’t mind eating pie soup.

Pie baking hint: I think I finally got my methods down pat. I bake the pie directly on the bottom rack at 400 degrees until the pie filling starts juicing up (for the blackberry it took about 30 minutes). Then I turn the heat back to 350 and put the pie on a foil lined metal baking pan and continue baking till it was done. (When the edges start to get too dark, I cover them with a foil liner.) This methods gives you a pie with toasty brown bottom crust, slightly singed edges (oops), and a completely baked top crust. 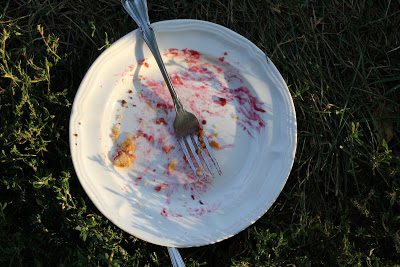