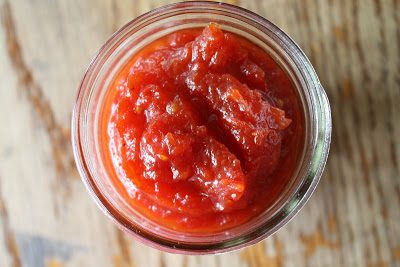 I want to do a post about this year’s garden stats and notes, but we’re not quite there. Tomatoes and raspberries are still coming strong, and the potatoes and grapes haven’t even happened yet. But in the meantime, before the tomatoes are all gone (boo-hoo), I gotta tell you about tomato jam because you just might want to simmer yourself up a pot for your end-of-the-summer cookouts.

This is a savory jam, not regular bread-and-butter jam. Which is what my mother was thinking it was when she sampled it. But I didn’t know she thought that, so when she squealed like I’d stuck her with a pin and spat it in the sink, I was shocked and crushed. It wasn’t until she said, in a horrified and accusatory voice, “You really eat that on toast?” that I realized we’d had just a simple misunderstanding, and quick-quickly, I explained that it’s not jam jam, but more of a relish jam, You know, like to eat on hot dogs. And then she was all like, Oh, well THEN. Give me a spoon. I want to taste it again. The second time around, she liked it, and my shaken pride was (mostly) restored.

There are all sorts of tomato jam recipes out there (and some people do eat it on biscuits), but the one I used is as straightforward as they come: tomatoes, sugar, salt, black pepper, and paprika. It makes an ample pint that stores nicely in the fridge for several weeks, at least. Or, you can can it. 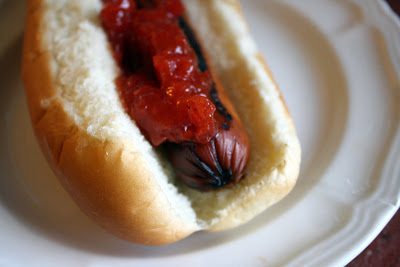 To serve, mound it up real high on hot dogs and burgers (my plan for next weekend!). Both me and my man much prefer it to regular old ketchup.

Adapted from the August 2011 issue of Bon Appetit

The recipe calls for smoked paprika, of which I sadly had none—regular worked just fine.

Stir together the tomatoes and sugar and let rest for 10 minutes. Bring the sweetened maters to a boil and cook for 15 minutes, stirring frequently. Add seasonings and continue cooking (reduce the heat, if needed) until the jam has thickened and reduced to about 2 cups. Refrigerate, or can.

This same time, years previous: basic oatmeal muffins (I’ve been making these for a year now and they are still my favorite), earthy ponderations, part three