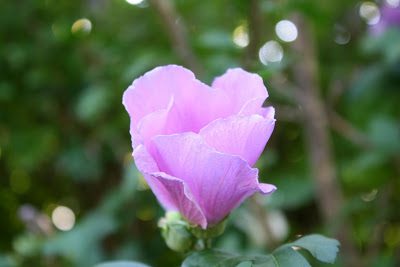 Just popping in here quick. I don’t have much to say and my brain feels kind of fuzzy, probably because I was up too late watching Taxi Driver.

Right now I’m sitting on the green sofa. I just finished off a slice of blackberry pie and an iced coffee. And before that there was a plate of roasted corn and cherry tomatoes for me, and eggs (one duck), toast, and apples for the kids. The oven keeps clicking on and off—there’s granola in it. Fans are whirring, birds are twittering, and the noise machine is doing its thang. 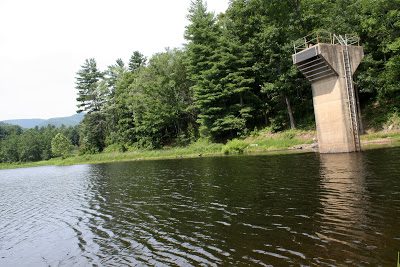 This morning the kids and I went to the dam again in search of blackberries because just the thought of all those berries going to waste out there in the middle of nowhere kind of put me in a tizzy. More! More! More! my inside voice yelled at me. Go get ‘em! 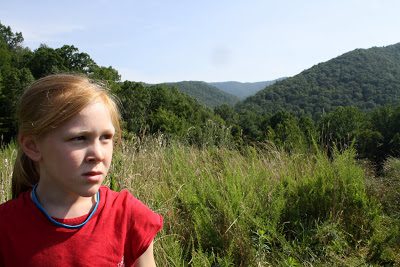 So we did. We got a little over two gallons this time. They are sooo good, sweet, soft and melty, and thick with juicy sweetness. They kind of taste like honey. 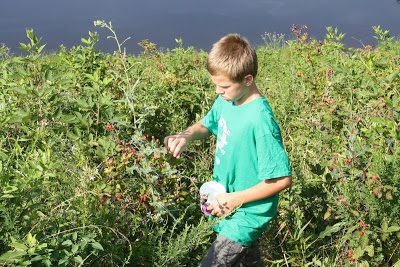 We discovered a Really Good Picking Spot down close to the water where you can get six to ten berries in one swipe. I had to tear myself away, both literally and figuratively, since I had waded in way off the beaten path. 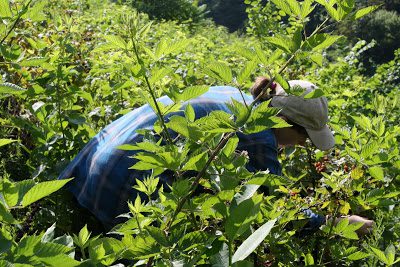 I grew up thinking that blackberries were junk fruit. My mother didn’t really like them (her distaste extended to red raspberries, too). Black raspberries were the only good raspberry berry, according to her. Even so, one year she put up 88 quarts of blackberries. Maybe that’s why she doesn’t like them? 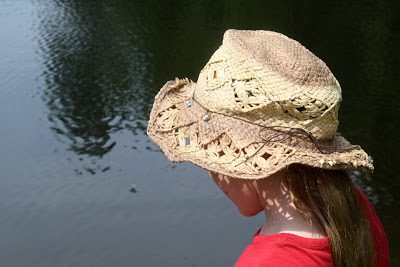 I don’t harbor any such prejudices towards my berries. I love ’em all and am thrilled beyond measure with my berry patch find. I’m actively dreaming of more blackberry pie; there’s another recipe at the top of my mental queue and it looks like it might just be a winner. (Last night’s was good, but not good enough.) 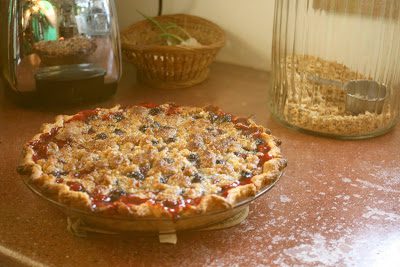 And…
*I’m reading Watership Down to the kids. It’s slower than I thought it would be, and I’m getting kind of tired of reading about rabbits. But I might as well get used to it since it’s a long book and, well, all about rabbits. The kids like it.

*Last night I learned that some of my friends are addicted to Glee. I did not know this! I thought I was the only one watching the silly high school parody and therefore was a little embarrassed about my addiction. But the friends who are hooked are whip-smart intellectuals—one of them has read Annie Dillard’s Pilgrim at Tinker Creek THREE TIMES THIS WEEK. So to discover that she stays up till 1 am most mornings watching Glee made my day. Because this means that I’m a whip-smart intellectual, too, right? (Never mind that I’ve never read Pilgrim at Tinker Creek.)

*It is dry and hot and the garden is officially going to pot. The flowerbeds are filled with giant weeds, but I can’t bring myself to weed them when it’s so dry. And we don’t mow during a drought so the yard is a wreck. We have become Those Neighbors That Everyone Is Embarrassed To Live Beside.

*I commented on SouleMama’s post about raising meat birds. At first some people were really upset by what I said (that we enjoy butchering day), but then some others chimed in to back me up. It’s an interesting group of readers over there. I like being one of them.

*We had the spring rolls for supper last night and no one liked them (except me). And I went shopping for the ingredients, did all that chopping, and made a scrumptious spicy peanut dipping sauce, too, and all for naught. I hate when that happens. Now I have a whole stack of rice wrappers. In order to use them up, I think I’ll have to fry them. Which should be pretty tasty, I think.

*I live for my daily cold bath. Lately I’ve been reading MFK Fisher’s book, The Art of Eating, while I chill. Did you know that the average male will, between the ages of 20 and 50, spend more than 800 days and nights eating? Some people find that disgusting, but just the thought of that much food—and getting to eat it all!—makes me feel safe and happy.

*Another interesting fact, though not food related: only 1 percent of blog readers leave a comment. Go on, folks, prove that statistic wrong! I dare you!

*Did you know that a big bag of Peanut M&Ms costs nearly five dollars? I did not. In spite of my sticker shock, I bought them anyway. And a bag of Twizzlers and assorted Snickers, too. Because Mr. Handsome was taking the two older kids to the Harry Potter movie (part of my daughter’s birthday present) and the kids insisted that large quantities of junk food were a vital part of the experience. So I indulged them. (And myself. Two of the bags were already open when I handed them over to the movie goers.)