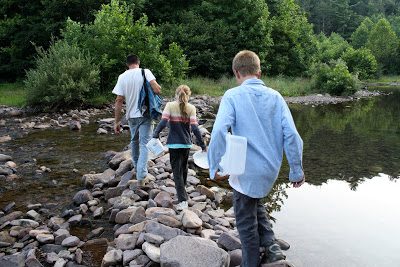 Last night’s perfect July evening was ours for the taking, and we ate it right up.

There were blue skies and frolicsome breezes to go with. There was pool time with friends, the moms (and dad) sitting on the side talking about butchering turkeys, kids’ schedules, and make-you-own spring rolls (my new craving). There was corn on the cob and the first tomato sandwiches for supper. And there was an excursion to a never-before-seen-by-us destination in search of our own little bit of blackberry heaven.

We—Mr. Handsome and I, plus the two older kids (the younger two are visiting their grandparents’)—put on long pants and sneakers, gathered assorted plastic containers and extra long-sleeved shirts, and set out on a pre-bedtime adventure.

We had no idea where we were going, really. Our friend Kathy’s directions were vague—drive down a certain road, cross a river (but not the second one), and look for a pull-off on the right with an old gated road on the left. No signs were involved.

Amazingly enough, we found the pull-off without any trouble. We struck off into the dark woods (it was a full ten degrees cooler than at our house, so said our car thermometer), came to a river which we crossed on rocks, and then crashed around in the woods for a bit until we found the trail again. We hoped it was the right trail anyway.

“Just go until you come to a place where the trees open up,” Kathy had said.

And then suddenly, the sky growing big above us, there it was! 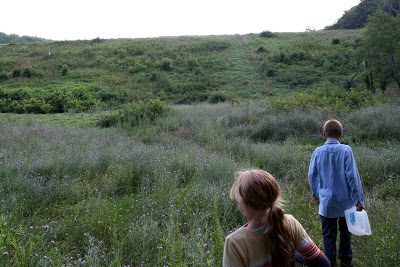 The hike up the dam was steep. The view was exhilarating. 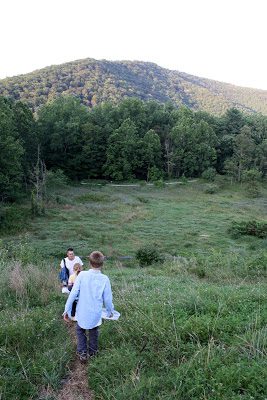 climbing backwards—it’s a lot steeper than it looks

I was a little concerned about what I would find on the other side. Was the water up to the brim? Would we just fall straight over and down to our watery death below? What if the dam suddenly crumbled?

When I had asked Kathy how safe the dam was for the kids, I was thinking about falling and drowning and getting lost, so she caught me completely off guard when she said, “Well, there are black bears.”

“Oh yes,” she said. “Just this morning when we were picking, one popped up not twenty feet from my husband. He yelled at it and it moved off. But then a little later it got in between where we were both picking. They’re really not dangerous, but last year there was a mama with her two cubs and that could be dangerous, of course.”

“And there’s snakes, too, but we didn’t see any this morning.”

Clearly, falling into the dam and drowning were not the pertinent risks. My worries needed to get more … wild.

We didn’t see any black bears, sadly enough. Or snakes (not one drop of sadness there). 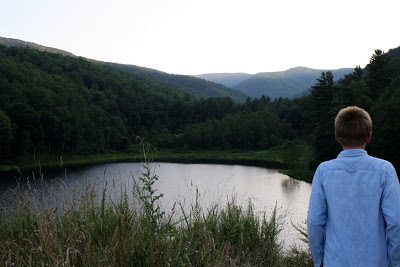 What we did see was a spectacular view and lots of sweet juicy blackberries. It was a little slice of heaven on earth. 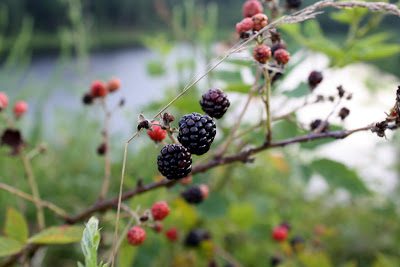 The kids meandered all over the face of the dam, picking berries, throwing stones into the water kersplunk, and chattering to us about all sorts of stuff, their clear, happy voices echoing off the water and bouncing back up to where Mr. Handsome and I were battling thorns and bugs with a focused intensity that children aren’t yet capable of. 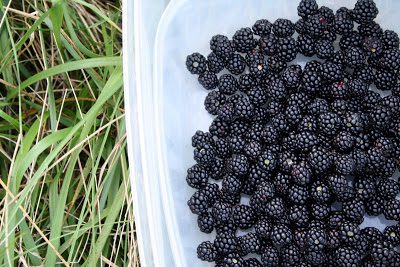 The evening light fast fading, we collected our containers and headed back down the dam and into the now quite dark and spooky woods. 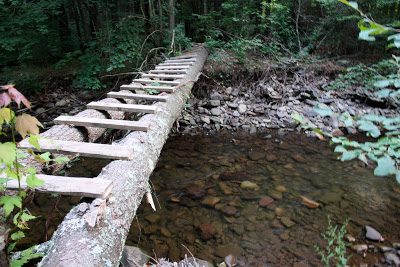 We used the homemade log bridge to cross the creek, and I was as skittish as a city slicker, my kids running circles around me and jumping on the logs till I wailed at them to please stop. 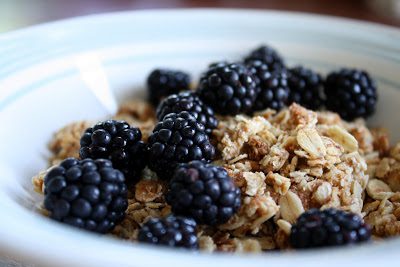 This morning’s breakfast was blackberries and granola. Later there will be a blackberry pie. And maybe a cobbler, too.

July has a sweet side and I have found it, o happy day!