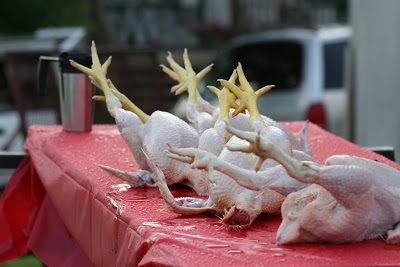 Warning (as though you need one with the word “butchering” in the title, but still, I like to be thoughtful and thorough, kind of like the warnings that you see on the jars of peanut butter: “warning: contains peanuts”):

This post contains blood. And chickens, in their dead state.

I always take an exorbitant number of pictures every time we butcher. I think it has something to do with the outside scenery, the plethora of emotions and expressions flitting across everyone’s faces, the out-of-the-ordinary subject matter, and perhaps the fact that holding a camera protects me from getting my hands bloody.

“You know what?” my husband said last night as we were getting ready for bed, “I don’t think you touched a single chicken all day.”

He was right, I realized, with sheepish delight. (But I was there! See my coffee cup at the end of the table full of dead chickens in the above photo?) Except for briefly touching a couple necks and livers, I did not do any chicken handling. My kids are finally getting old enough to cover for me, hallelujah!

They were all (with the exception of Sweetsie) incredibly excited for butchering day. We told the older ones that we’d have to wake them early, and I promised the youngest that I’d wake him up, too. The older two were already working by the time I crawled out of bed at 6:15 (they didn’t even need a wake-up call, it turned out), but the baby Nickel was sound asleep. I almost left him be, but then I remembered my promise and, disregarding all my natural instincts that tell me to never, ever wake a sleeping child, I went into his room and jostled his shoulder. When that didn’t do the trick, I leaned over and whispered in his ear, “It’s time to butcher the chickens.” Immediately, he was in a frenzy, tearing off the sheets and running/stumbling down the hall, forgetting to get his clothes in his panic.

The expression he wore for pretty much the entire day: 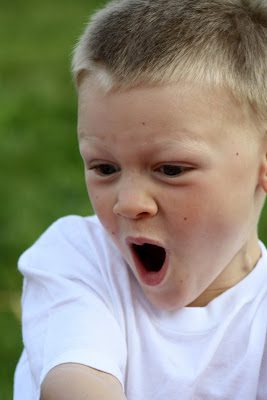 To shake things up a bit, I’ve decided to let the rest of the family do the talking for a change. I gave each kid their own personal interview. They were tickled pink. (Mr. Handsome got a phone interview. He wasn’t quite as tickled pink.) 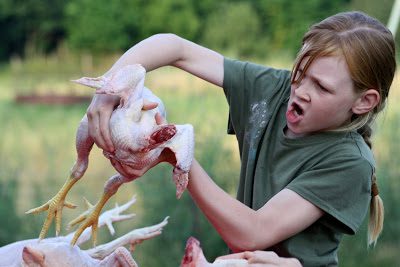 My worst part was when Dad was killing them. Definitely. 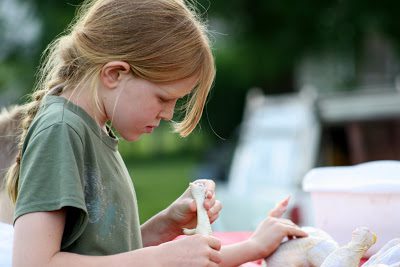 Figuring out how tendons (etc.) work

And my favorite part was gutting them, of course. I loved it. 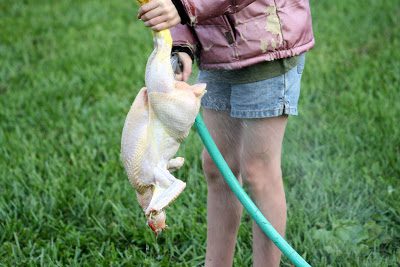 Because inside it was warm. 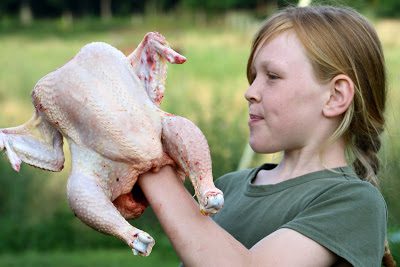 You can kill a chicken at winter and then use them for gloves. 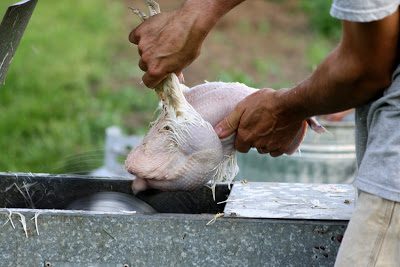 Also, I don’t like when Dad—I mean, Mr. Handsome!—is plucking them because sometimes he gets it stuck [in the plucker], and yeah, it freaks me out too.

But afterwards, I liked when Mom was taking pictures because it was really funny and then we looked at all the pictures. 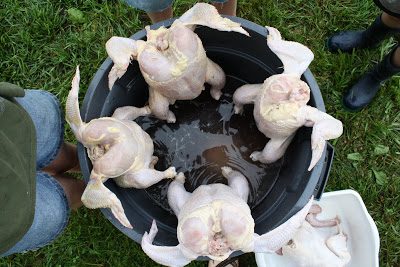 Another thing, there was this chicken that we thought had a broken leg and Dad killed it and cut off its head and then we discovered that the chicken above its leg had a huge bruise so Dad decided not to finish plucking and gutting it, so he left it on the ground next to the plucker and then it got stiff and I picked it up and its legs were sooo stiff that when I picked it up by the feet it stood straight up in the air like a rod. 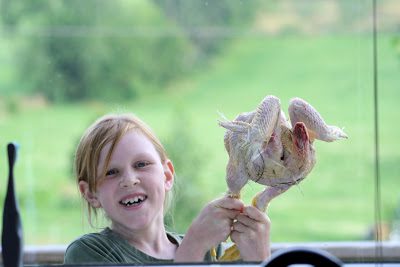 And we got some funny pictures of that. 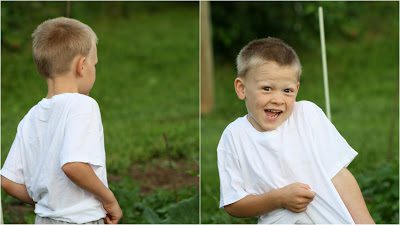 when watching something intense, he always holds onto his shirt 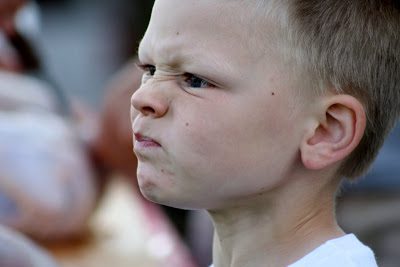 Not sure what this face is about—I think he had just finished giving his nose a vigorous rub.

I loved watching Dad plucking them, and I liked when [Yo-Yo] plucked them ‘cause he did it on the side and it made a big bruise. That’s all. 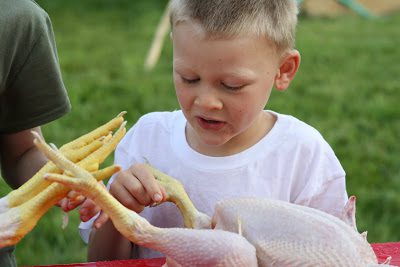 Oh, I liked sticking my hands inside of them. 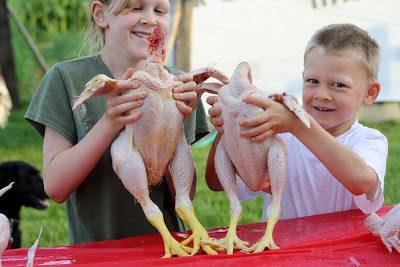 Sweetsie
I didn’t like about it when I smelled the … um, it smelled like something disgusting. I thought I was going to throw up but I didn’t. 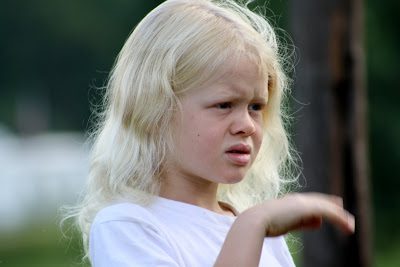 It was good I didn’t. 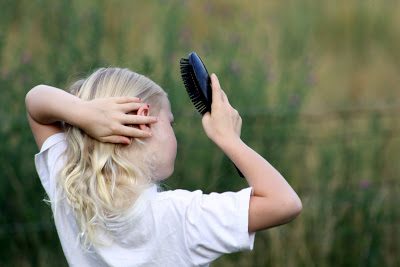 Fact: she spent much of the morning groggily/grumpily (it’s hard to tell the difference sometimes) brushing her hair.

They cut their heads off and did all of that other stuff—disgusting. I didn’t dare to stick my hand in that chicken because it looked disgusting, but it was warm and there was a lot of feed in the necks.* 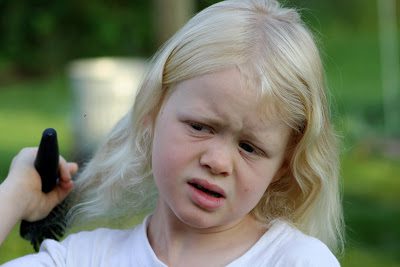 And then I stuck my hand inside it and got all these things out. There was this brown something that looked like an egg or something. It was all weird.

Yo-Yo
I thought it was fun and not gross like it was last year. I was able to help out more. 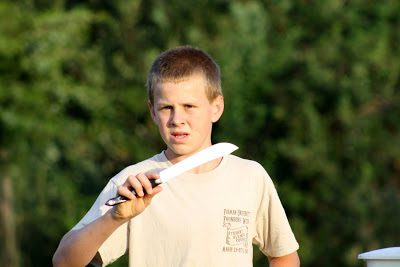 I got up at six in the morning and set up a lot of it with Dad. We brought the chickens up and then Dad sliced their throats and bleeded them and drained them and chopped off the heads with a hatchet and then scalded, plucked, and did the gutting. 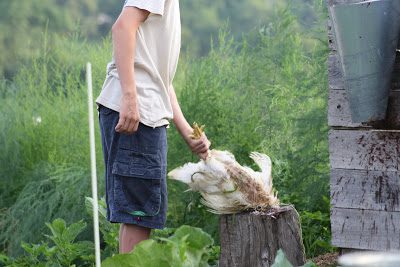 I tried plucking them and the wing got caught and it was kind of funny. Dad turned it off and I thought it was just choking up so I turned it back on, and it started grinding really loud. I scared myself out of my wits. 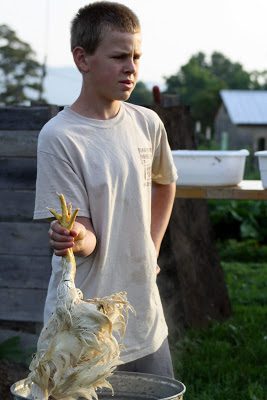 I scalded them and was able to gut a few. I cut off their legs and cut off their necks. And I was hot and sticky and tired when we went to swim lessons. 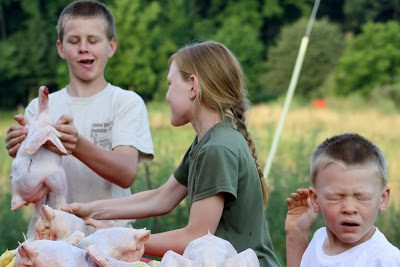 That was pretty much my day.

Mr. Handsome
The kids helped out, and they were eager and willing helpers, especially Miss Beccaboo. 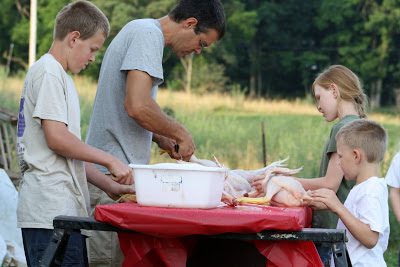 I felt a little more confident, like I knew what the heck I was doing this time. 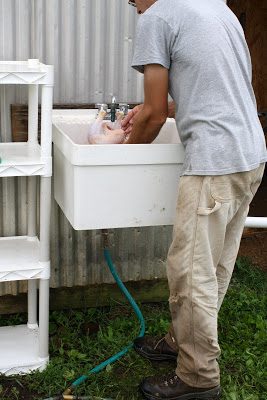 I had the cones already made and a sink set up. 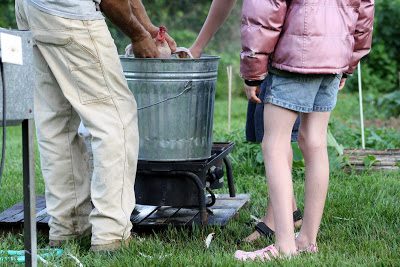 I used a 17-gallon trash can for scalding—it leaked until the metal expanded and then it didn’t leak any more. I don’t know if putting the chickens in a bucket of water was such a smart idea—I’m afraid they’re waterlogged. 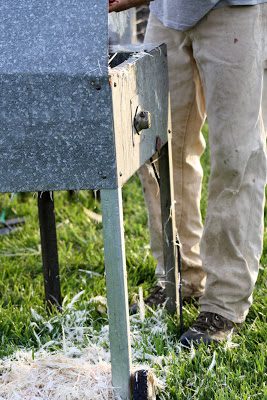 When you’re set up to do something, it goes a whole lot faster. 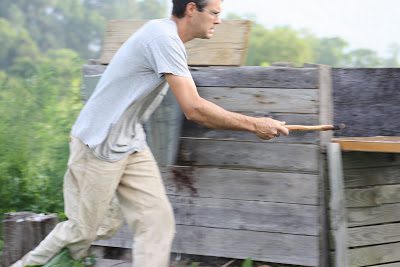 Look at him go!

For the record
Mr. Handsome was up at 5:30 and the older two at 6. We all worked until 10 (I was working, just not with chickens) when I took the older three to swimming lessons. Everything was finished by about 2 pm, though there was a little leftover clean-up later in the day. 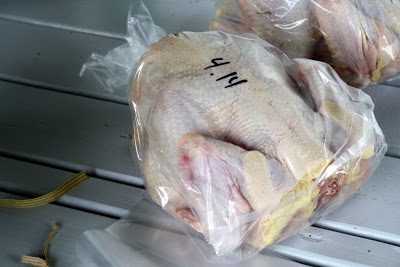 Tidbit: both Yo-Yo and Miss Beccaboo were sorely disappointed that we didn’t have chicken for supper that night. “But I know which chicken I want to eat!” Miss Beccaboo pleaded.

*Regarding the corn in the necks. The chickens were off their feed for about 24 hours prior to butchering, but unbeknownst to us, there was some corn in the bottom of the container that we used to haul them from their pen to the slaughter yard.