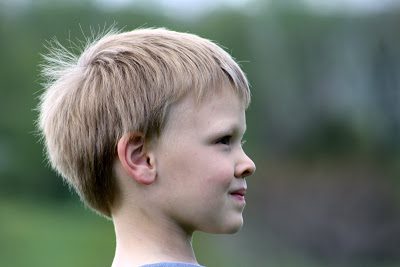 I’m having trouble coming up with stuff to write about. My energy levels are low and I just want to veg, preferably in a refrigerator somewhere. However, a glass of iced coffee (with a spoonful of sugar, yum) and a ceiling fan are the closest I’ll get to a chilling experience. And truth be told, it’s not too shabby of a substitute, either.

So now that I worked that one out—hmm, what else to say…

My littlest child has been having trouble sitting still during the times he’s supposed to sit still, like church. We weren’t ten minutes into this morning’s service before he started writhing all over the chairs, kicking his feet up in the air, moaning, and rubbing my skirt in the wrong direction (as in UP, yikes). So I hoisted the twit onto my hip (no small feat—the kid weighs a solid fifty pounds) and marched out of the sanctuary to a Sunday school room where we practiced The Art of Sitting Still for Church.

We reviewed the basics, like how to quietly ask a question, when he would be allowed to look at books (during the sermon), when he could color (any time), whether or not feet were allowed up in the air (they’re not) and if he might put them on the chair to sit cross-legged (he might), and above all, HOW TO KEEP HIS BUTT ON THE CHAIR AT ALL TIMES. Then we walked sedately back into church and he behaved like an angel for the rest of the service and I felt very successful and like I should totally get a gold star for my Smart Mommy Move.

Yesterday my oldest put on my sports bra, stuffed it with somethingorother, smacked on a set of fake lips, and whooped it up big time. 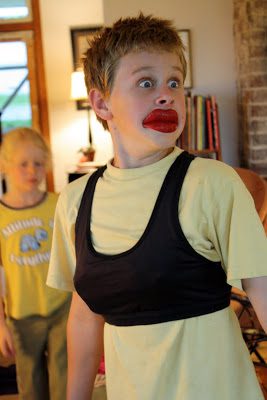 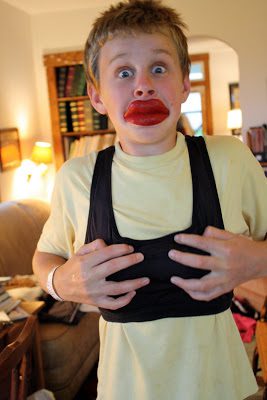 I especially loved his I Love Lucy eyes. 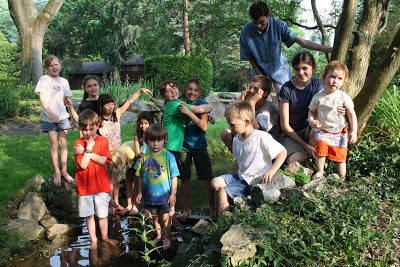 I think the two days can be summarized with two sentences: 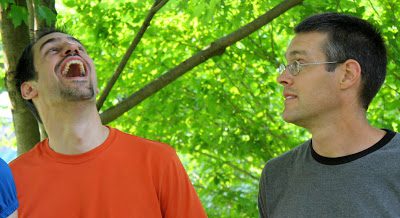 Here are two of the brothers…um…communicating? Counting teeth? Singing?

Aren’t brothers awesome? And to think my husband has six of them (and two sister gems). Lucky man!

I spent all of Friday at a water park with the kids. The place was crawling with dripping wet, scantily clad people. (Which led me to the radical conclusion that most of us humanoids look best when more than fifty percent of our skin is under wraps.) The whole entire huge complex was very, very wet and very, very loud, so I guess that means it was a rip-roaring success? I had eight hours to enjoy the thundering wetness and to resent my littlest for being such an unadventurous wimp and cutting my fun off right after his single terrorizing ride on the (very sedate) lazy river. Little twit, again. 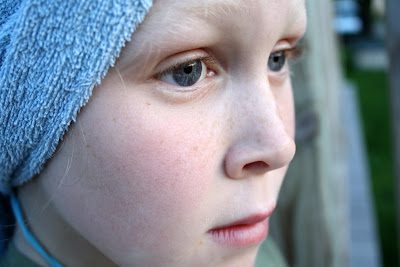 And in those same eight hours, my oldest daughter, in spite of TWO vigorous applications of 50 SPF sunblock, managed to burn to a crisp. Her shoulders are like two pieces of Kentucky fried chicken, but red instead of brown. I feel horrible for her, of course, but I’m pissed more than anything because for once I did everything right—I even scrutinized the bottle’s expiration date! Next time I’ll make her wear a body suit. After all the pain she’s been in, I have no doubt she’ll readily agree to such a get-up.

We’ve taken our Sunday waffles up a notch. Instead of buttermilk, we’re now doing a sourdough that rocks something serious. The crust is crispy-ispy-ispy, and the insides are moisty-oisty-oisty, and the flavor is tangy-angy-angy. We’re all in love. 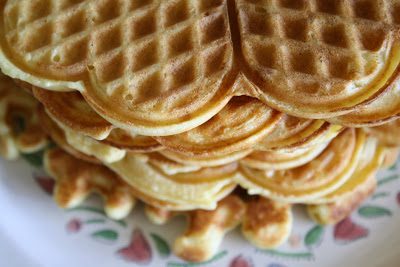 Those of you who don’t have a sourdough starter in your fridge might be tempted to roll your eyes and skip the rest of the post but please don’t. Surely you can obtain a starter somewhere? somehow? (Local people: I’m all about sharing—call me.) Because you really need to have some starter so you can make these waffles once a week, every week, for the rest of your life. They are that good. And the upkeep is minimal. Seriously. I don’t even measure.

This is what I do: I keep a cup or two of starter in a half gallon jar. On Saturday afternoon I take it out and feed it a equal parts flour (often I use whole wheat) and water. I do that once, or twice, depending on how strong the starter is and how many batches of waffles I think we’ll eat. Sunday morning I measure out the starter I need for the waffles and to the remaining starter—the starter I’m not using for the waffles—I add some more flour and water. I let the just-fed starter sit at room temperature for about an hour (so it can begin to digest its latest meal) before putting it in the fridge to snooze until the next waffle meal. A once-a-week waffle dinner is enough to keep the starter happy and healthy … and my family sated with waffles. 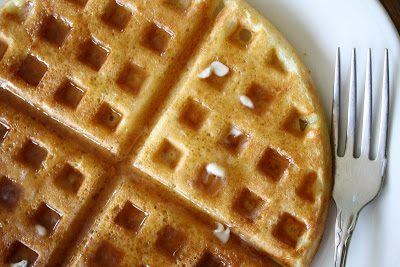 Back to the starter that I measured out: to that I add the butter, milk, more flour, sugar, and salt. I stir it up real good, cover it with a shower cap, and leave it to do its thing till I call it into service at lunch time or late afternoon or evening. (If you want waffles for the ayem, do the batter mix up the night before.) (And for a lunch time waffle feast, you can mix them up the night before, too.) (Ideally, the batter should rest/rise/ferment for about 8-14 hours.) (I hope this isn’t sounding too complicated and parenthetical.) (Because it really is easy.) 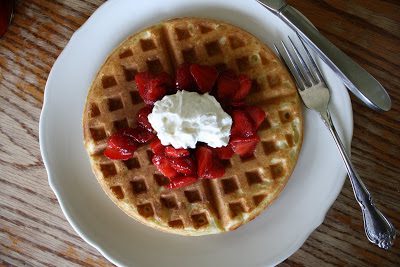 Sunday pee-em, or whenever it is you want to actually eat these waffles, all you gots to do is stir in some baking soda (that’s been mixed with a couple tablespoons of flour to help the soda disperse more serenely in the thick batter) and some beaten eggs and—(I was beginning to lose hope that I’d ever get to the end!)—make your waffles.

Which is what my husband is doing at this very moment, bless his heart. Sunday evening waffles, here I come! 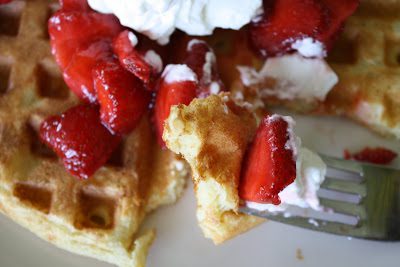 Butter lover that I am, I actually cut back on the amount of butter. Nancy calls for a half cup, but I make it more like a third and find them to still be plenty rich.

I use part whole wheat—during the fermentation process it softens so much that you can’t even tell it’s part whole grain.

Roughly 12 hours before Waffle Time!:
Mix together the first 6 ingredients. Cover with plastic wrap and let rest at room temperature for 8-14 hours.

Waffle Time!:
Sprinkle the baking soda-flour mixture over the bubbling dough and whisk briefly. Whisk in the beaten eggs. Make the waffles. Serve with berries, whipped cream, butter, and syrup.