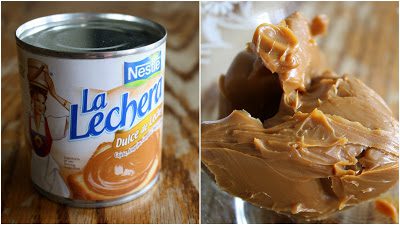 Or, to be more accurate, two new bad things. Because it’s not like there weren’t any bad things in my life until these two bad things came along. For the record, my life is full of bad:

bad hair (my baby’s—it looks like someone took a machete to it)
bad language (oops, did I just SAY that?)
bad behavior (only my kids’)
bad weeds (naughty, naughty weeds!)
bad communication (my husband’s specialty)
bad memory (all mine)

But now I have two new Bads to add to the list. That I’m in love with them makes it all the worse.

(But can it be called “thinned down” if it’s half-and-half doing the thinning? Hm, I must think on that.)

1. Open a can of ducle de leche and take out a large glob.

2. Heat the glob up in the microwave for a few second, just enough to help it relax. 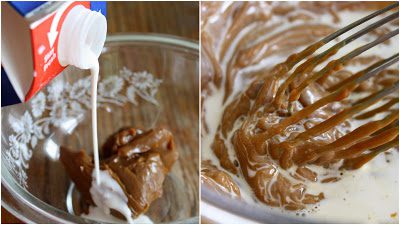 3. Whisk in some half-and-half. 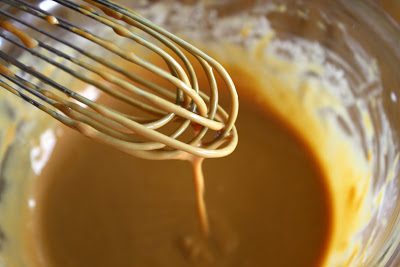 6. Yeah, just keep whisking and adding till it’s the consistency you want, which would be creamy and pour-able, kind of like Hershey’s chocolate syrup. 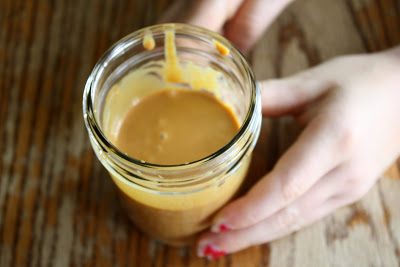 7. Store the now very skinny dulce de leche into a jar and put it in the fridge.

8. Every afternoon when you pour your iced coffee concentrate into a pint jar, add a hearty glug to go with.

(9. And if you’re feeling particularly wicked, top off your pint with a scoop of leftover whipped cream that’s been getting all lonely in the back of the fridge.) 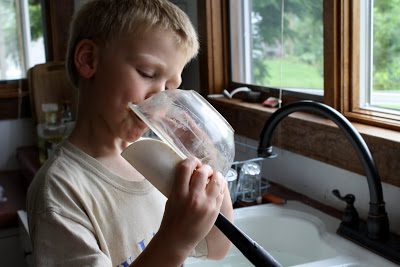 My little dishwashing boy pounced upon the sticky bowl, and in the midst of giving it a good tongue washing, he happily announced, “Mom, I’m in love with dith!”

It’s all my mother’s fault. When she was here this past weekend, she brought the pre-assembled fixings for a chocolate cake and then baked it up in my oven since hers is on the fritz. The plan was to take the cakes home with her, but she made a little one for us to eat right then and there in honor of Father’s Day, and in spite of my warped and hole-y measuring cups (Jennifer, this is ridiculous!) and the unappealingly smeared-on icing (thanks to one little girl), the cake was really good.

And then my mother said, in an off-handed sort of way, “You know what I’m going to do with one of these layers when I get home? I’m going to ice it with peanut butter frosting and then drizzle a chocolate ganache over top.”

And then she smacked her lips at me.

I played it cool, genteelly nodding my head at her, but truth is, she did me in. I had to have a chocolate cake with peanut butter frosting and chocolate ganache.

So I made myself one. Because I’m practical like that. 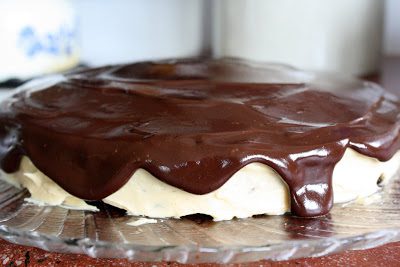 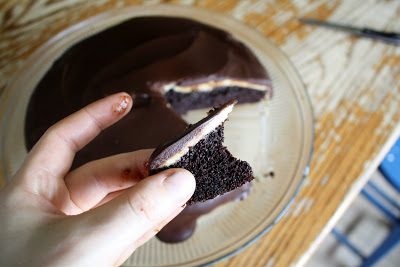 Bake the chocolate cakes in two round pans. Each cake goes a long way, so freeze the extra one or give it away. (I gave it away.)

Spread the cake with the peanut butter frosting. Really lay it on. (I’m struggling with Icing Application Regret—I should have been much more generous.) Set the iced cake in the fridge to set up—it needs to be rather firm so that the ganache won’t push it all around. 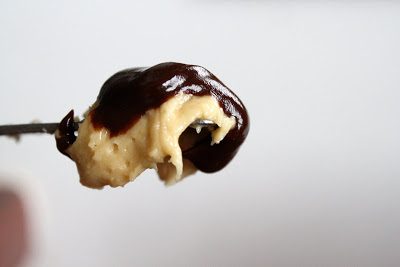 While icing the cakes, do not neglect your tasting duties!

Pour on the ganache. Use a knife to push it (artfully) over the edge. Store the cake in the fridge. Cut off slices as needed. 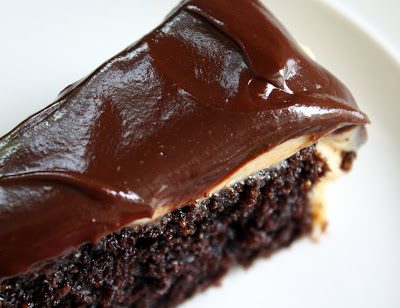 Put the chocolate, peanut butter, and syrup in the top part of a double boiler and cook until melted, whisking occasionally. Remove from heat and whisk in the cream. Spread over the cake while still warm (but not too hot).