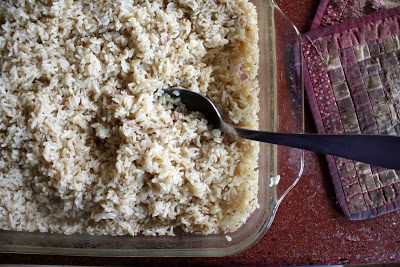 The first meal I served for our family reunion was the golden chicken curry that I’ve already told you about. I figured it would be a fast, nourishing, one-pot meal, something that the kids would like and that could be kept warm on the stove so people could eat whenever they ended up arriving. I made a double batch of the curry and then two kinds of rice: three cups of white rice cooked on the stove top and three cups of brown rice baked in the oven.

It was the first time I had ever baked rice like that and I wasn’t too sure it would turn out right. But I only have one kettle that does a good job cooking rice, and Cousin Zoe had said that it tasted really good, so I decided to go ahead and risk our dinner for the sake of convenience.

Which in retrospect is a really silly thing to say because that pan of brown rice made the best brown rice I’d ever eaten, I do declare, do I. 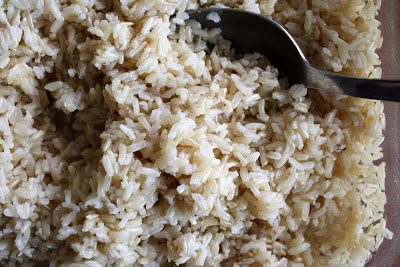 Each grain of rice was light and fluffy, nutty and toothsome, with not a trace of mushy gummy-ness to be found anywhere. I was thrilled.

Apparently everyone else was too, because it got eaten right up, at the same speed as the white rice. And then I had to make another pot of rice (white this time, for convenience and speed) because more guests were due to arrive and we had nary a grain of cooked rice left in the house.

The downside of this recipe is the extended hot oven time, but that could be a good thing, if, say, it’s winter and your house is on the chilly side and you’re looking for a good excuse to crank up the oven. Or, perhaps you’re baking an accompanying side dish anyway and it makes perfect sense to bake the rice alongside. Or, and this will put you in league of Amazing Kitchen Goddess, you bake this any time you are baking something else, be it baked oatmeal or spinach quiche or rhubarb cream pie, even though you’re not planning to eat rice right at that very exact moment—just stick it in the fridge after it has cooled and smile like an imp because you are so dang smart. 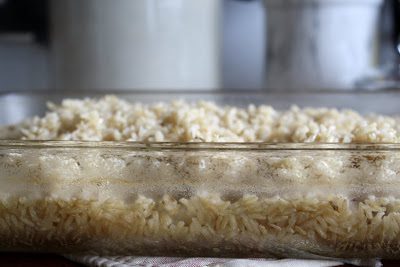 The chicken broth is optional but it does add such a lovely flavor, not to mention a nutritional boost.

Combine everything and pour into a 9 x 13 glass baking dish. Cover tightly with foil and bake at 350 degrees for 1 ½ hours.