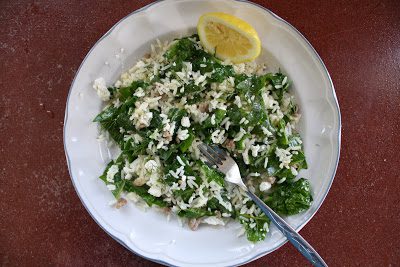 This is the reason I got up this morning.

Okay, so not really.

I mean, it was partly the reason, but not all of the reason.

The other reasons I got up were because the light sky outside my bedroom window made the dream inside my head turn off.

And I got up because I dreamed that my brother was flying to Qatar where he’ll be working for a couple months (and consequently missing the big bash that he talked me into hosting, the stinker). (Not stinker for making me host it but stinker, royal stinker, for missing it.) And I was all like man, did he just go and fly halfway around the world without calling me first? The stinker! (He called me this afternoon from the airport. Now he can go halfway around the world.)

The other reason I got up is because I remembered we had gotten a fresh load of library books the night before and I knew if I got busy I could get quite a few things done while the kids lost themselves in the mountain of books.

The other reason I got up was because, while I lay there thinking about plane trips and library books, I thought I heard one of the kids calling for me which made my whole body tense in preparation for a forthcoming leap out of bed and charge down the hall to the offending child’s room where I would attempt to hiss the twerp into silence.

The noise, however, was just a barking dog.

But I certainly couldn’t go back to sleep after that adrenaline rush. I needed coffee.

Besides, the other half of the bed was empty and I was curious as to what the dude who sleeps there was up to. (He was cleaning.)

About the time I threw my covers back, I recalled yesterday’s lunch, which is what you see in the pictures. And then I got all sorts of hungry and excited. I thought about making myself another skillet-full right off the bat for breakfast but then decided to wait.

And now, several hours later, I just finished my lunch, and boy oh boy, was it worth the wait. While the kids slurped up their green smoothies (ever since the spinach has come up, they’ve been begging me to make them) and munched on thick slices of freshly-baked sourdough bread smeared with peanut butter and drizzled with honey, I plowed into my made-to-order lunch and proceeded to rave profusely. (The kids just rolled their eyes and said no thank you when I stabbed loaded forkfulls in their general direction.) 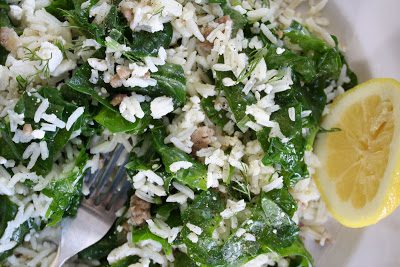 I got the idea for my lunch from Julie but ended up changing it just a bit. Because yesterday, when I was on my way back in from raiding the garden for spinach and a couple baby purple onions, I passed by the lettuce patch and the fresh scent of new dill fronds—they’re coming up all over the place—caught my imagination so I snatched up a few.

In the kitchen, the pot that I had earlier used to fry up a pound of bulk sausage, was still sitting on the stove. Into the kettle I tossed my chopped onions and a little drizzle of olive oil. A teensy bit of sausage (maybe a tablespoon?) was next. And then a couple handfuls of torn spinach. I stirred it around till the leaves began to darken ever so slightly and then added a spoonful of leftover cooked rice. As soon as the spinach appeared to droop a little (not wilted, and definitely not cooked—it should still retain some crunch), I dumped the contents of the pan onto my plate where I added the finishing touches: some crumbled feta, a very generous squeeze or two of lemon, lots of fresh dill fronds (at least a tablespoon, and maybe two), and several grinds of black pepper. (Today’s lunch included some sliced baby radishes as well.)

This salad has made some of the best lunches I have had in a long time. It is deeply satisfying, thanks to the sausage and rice, and yet brisk with all the bright springtime flavors. 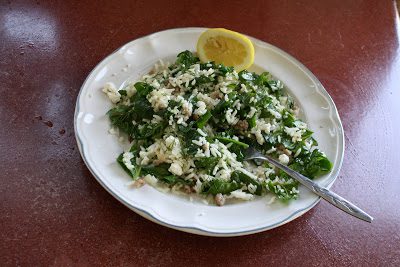 This salad can be served at room temperature or cold, which means it’s perfect for packed lunches.

Feel free to experiment with different types of rice, orzo, quinoa, or any other grain that tickles your fancy.

I do not measure when making this salad; the guesstimated measurements are to give you a general idea.

Cook the onions in a little fat. Add the cooked sausage, if using, and the spinach. Once the spinach has started to darken just a little, add the cooked rice. After about a minute of cooking and stirring, when the spinach is slightly droopy though still crisp, dump the contents of the pan onto a serving plate. Top with the remaining ingredients and dig in.

This makes enough for one large serving.