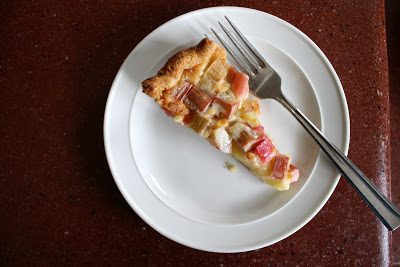 I found the rhubarb cream pie that I’ve been looking for my whole live-long life!

Oh. You didn’t know I was on that particular quest? That I was lying awake at night, bemoaning my lack of creamy rhubarb pie knowledge? That every time I glanced at my rhubarb patch I took to wringing my hands and sighing so deeply that the very breaths seemed to come from my ovaries? That I was paging through countless recipe books, calling my rhubarb guru friends, sobbing in my mother’s (unsympathetic) ear over the phone, plucking my husband’s sleeve and whispering piteously, “Cream and rhubarb, rhubarb and cream, oh shall I never get it right!”?

You didn’t know all that was going on?

I was at peace with the hundred and six rhubarb recipes I have tucked happily under the elastic waist of my yoga pants. I didn’t think I needed more. 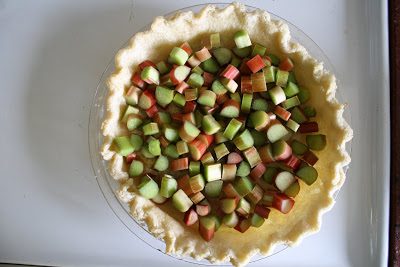 But then I opened up the food section of our local paper and there was a recipe for rhubarb custard pie from the Amish Cook. Usually I find her recipes too sweet, too bland, and too boring, so I just gave it a quick glance and made like to turn the page. But then I paused, pondered the ingredient list—cream, sugar, flour, eggs, and rhubarb—really pondered them, and then quickly tore out the recipe. 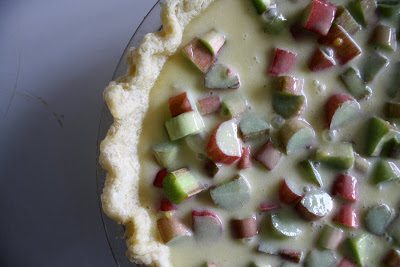 I’ve had other rhubarb custard pies before, and I’ve liked them all well enough, but they always seemed to be too something—eggy, bland, watery, sugary, etc. I doubted the Amish Cook’s recipe would be any better, but decided I’d give it a go. It wasn’t like I didn’t have plenty of rhubarb on hand or anything. 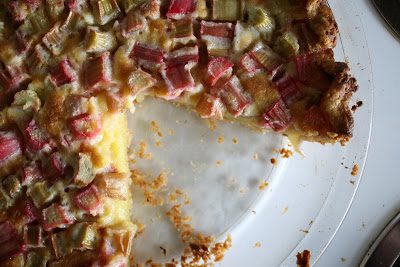 To make a long story short, I love, love, love this pie. Though, and this is the only fault I could find with it, it is clearly NOT a custard pie. It is a cream pie, as in a CREEEEAAAAAMMMMMM pie. Velvety smooth and lustrous, the creamy part melts on the tongue while the juicy bits of rhubarb squirt delightful bursts of flavor with every bite. All of that cupped inside my favorite rich, crispy, buttery crust? Ooh-la-la. Now if you’ll please excuse me while I go cut my THIRD slice of pie. 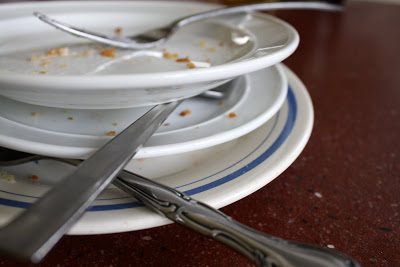 I actually had a little trouble with the crust the first time. It didn’t get brown on the bottom and there’s nothing more disappointing about a pie than a pasty, leaden bottom crust. I made two more then and was so concerned about getting them brown enough that I charred parts of the edges (the parts of the edges that I did not take pictures of).

The bottom line? Don’t under bake the crust and don’t over bake it. You want it to get just right—golden brown all over. But then you knew that, right? 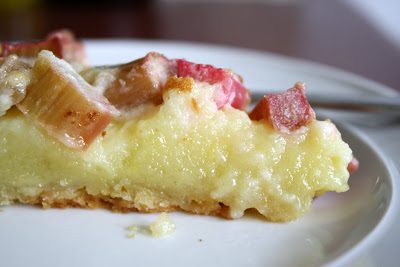 I’m sitting here reflecting on how very creamy this cream pie is and it occurred to me that it’s very similar to a dreamsicle, but with rhubarb instead of orange. Doesn’t that sound lovely?

In any case, this pie is a dream incarnate. A creamy dreamy cream dream dream. 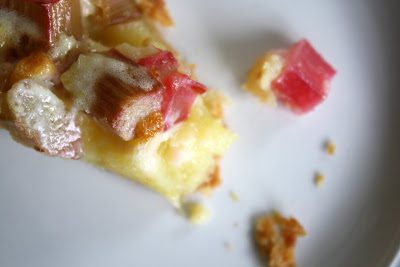 The rhubarb didn’t seem like it would be enough to fill a 9-inch pie even after I added an extra cup of fruit, but it was. It’s a more thinly filled pie, yes, but it’s so rich and flavorful that that’s as it should be.

Line the pie pan with the crust and crimp the edges. If you want to blind bake your crust to help it get a little more color, do it now. (This is optional. Do whatever you need to get a golden brown crust.)

In a small bowl, whisk together the flour and sugar. Add the eggs and whisk thoroughly. Add the cream and whisk some more.

Dump the diced rhubarb into the pie shell, pour the cream mixture over top, and bake the pie at 375 degrees for about 30-45 minutes. You’ll know it’s done when the center of the pie no longer jiggles when you wiggle the pan and the crust is golden brown on the edges and bottom.

Cool to room temperature and then chill in the refrigerator before serving (though I’ve been known to eat it piping hot).