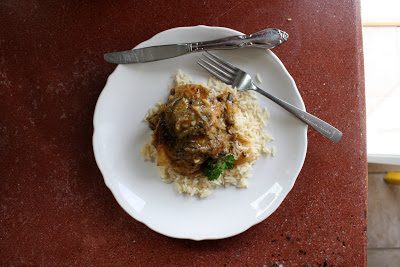 Preamble
I learned how to cook chicken with rhubarb.

And then I learned how to cook chicken with mushrooms.

The rhubarb chicken was actually rather conflicted, in the sense that we were conflicted as to whether or not we liked it.

Let me rephrase that: I was not conflicted. I thought it a lovely dish, saucy, sweet and sour, with a kick of heat. The kids, however, didn’t like the heat and John took issue with the “fruity flavor.”

“Chicken should not be fruity,” he stated firmly.

We were clearing the table and arguing when my brother and his wife stopped by.

“Ya’ll be quiet,” I ordered my family, not wanting them to foil my plan, and then turning to my brother and his wife I asked sweetly, encouragingly, “Would you guys like to do a little taste testing for me?”

“I’m already filled up on beans and rice,” my sister-in-law murmured.

“Um, can I have a piece of chicken, too?” my brother stage whispered.

I snatched them some silverware from the drawer. They helped themselves to some plates.

“This is really good,” my sister-in-law said, scooping the sauce into her mouth. “What’s in it?”

“You tell me that,” I countered.

“It tastes how barbecued chicken ought to taste,” my brother suddenly declared triumphantly.

Huh? We all turned to stare at him, squinched up our eyes (we had to—he was so far out in left field we could hardly see him), and then collectively pronounced his statement hogwash. 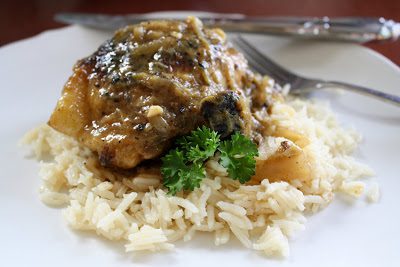 But I was vindicated. The chicken is good, so there, John!

The mushroom chicken was another one of those conflicted dishes. Mainly because no one in my family likes mushrooms but me. 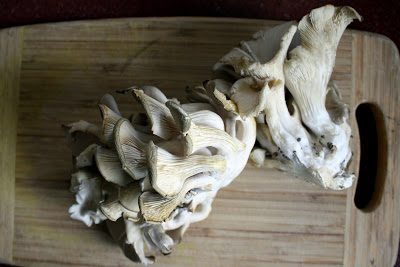 But if you saw these mushrooms at the Farmer’s Market wouldn’t you have to buy them, too?

A recipe for chicken with morels and shallots in the latest Bon Appetit (which is hugely improved now that they have new leadership) had been sitting in the wings of my brain waiting for a chance to star in the show that is my kitchen, and the mushroom-laden table at the market was just the thing to get me going. 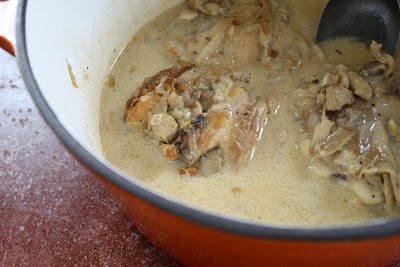 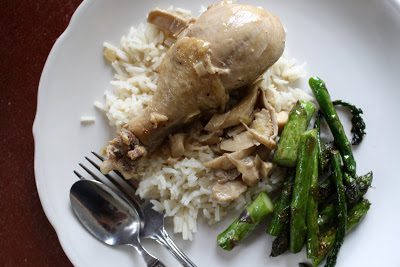 Basically, just cream of mushroom chicken dish, but with a lot more class. 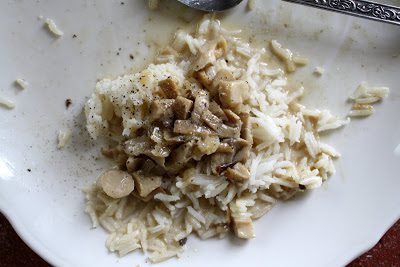 And you know what? My husband, mushroom hater that he is, said the dish had good flavor but that he didn’t like the texture of the mushrooms. We’re moving up, people! Full-blown sophistication may be in my family’s future!

Now for the recipes.

No one need know there is rhubarb in this recipe (if they are adverse to the idea of fruit with chicken), but it adds a splendidly zingy zip.

The recipe did not say how much Essence to use, so I put in a couple tablespoons. It gave plenty of flavor. (If you are sensitive to heat, go skimpy on the cayenne.)

Combine the Essence and flour in a bowl and toss with the chicken pieces.

Heat the oil in a large pan and brown the chicken pieces—about 5 minutes on each side. Remove the chicken from the pan and add the rhubarb and onion, some salt and pepper, and saute for about 10 minutes. Add the garlic, bay leaf, thyme, and white wine and stir well, scraping up the little browned bits from the bottom. Return the chicken pieces to the pan, cover loosely, and simmer for about 45 minutes, stirring occasionally. (At first it may seem that there isn’t enough liquid, but as the rhubarb cooks, it releases more and more water. By the end, the dish was quite saucy.) Immediately before serving, add the parsley and taste to correct seasonings. Serve over rice.

Mix and store in the freezer.

The original recipe (and how I made it) called for browning the chicken pieces and then simmering them in the sauce. However, I’m not a huge fan of large pieces of meat on my plate (though I did like them in the above recipe) and the resulting sticky fingers and bits of refuse littering the table. Next time I’ll just poach a chicken, debone it, and toss the meat in at the last minute. I’ll lose some of the flavor from browning, but sauteing the shrooms in a bit of bacon grease would remedy that problem.

Add the wine to the pan, and bring to a boil. When it has reduced by half, add the stock and bring it to a simmer. Add the chicken pieces, the cooked mushrooms and onions, and heat through. Add the whipping cream and bring to a simmer. Taste to correct seasonings and serve over rice or noodles.