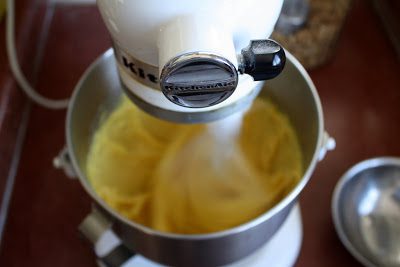 Sorry this is off-topic, but do you take requests?

I needed to bake cream puffs this evening (yes, needed!), so of course I clicked to your recipe list, searching for cream puffs, or profiteroles, or even eclairs. Nothing!

My desperation told me I’ve become addicted to your obsessive recipe-perfecting process. It felt really, really wrong to pull an anonymous, un-vetted recipe from cooks.com, and I was intimidated by the Bavarian cream recipes, so I finally just cooked up some vanilla custard and stuffed the cream puffs with that and some raspberry jam. They were fine, but…

All that to say, if your hens are laying gangbusters like mine now that spring is here, you could do a whole lot worse than to use some of those eggs up on cream puffs.

Well. How could I ignore such a desperate and sweet plea?

Actually, I thought I could ignore it just fine. I wasn’t all that interested in cream puffs at present. I had made them before—years before—and they were good, but cream puffs just weren’t the type of thing I crave that often, if ever.

But still. Her little request wriggled its way into the corners of my conscious, staked out a territory, and then proceeded to create all sorts of mayhem. It yodeled. It danced the two-step. It did somersaults and jumping jacks. And then it started scootching its tent closer and closer till it was occupying prime mental real estate and all I could think of were those dang cream puffs.

And then, just like Kirsten predicted (am I that easy to read?), I zeroed in on the ornery little buggers and got all sorts of obsessive. I researched the internet. I separated eggs. I baked. I tasted. I researched cookbooks. I took notes. I separated more eggs. I did more baking. Until now, finally, after three rounds of puff baking and four pastry creams, I have a cream puff recipe I’m happy with.

I sure hope it makes Kirsten happy, too.

The puff recipe is simple to make and a blast to bake. 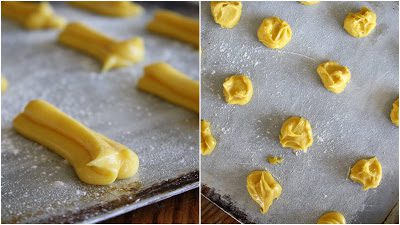 Puff pastry is just a super-thick roux (butter, milk, water, and flour) that gets cooked over the stove and then, off heat, gets a bunch of eggs beaten into it. 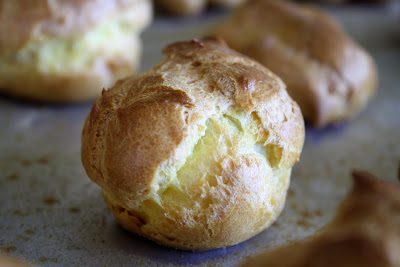 Sit by your oven door while they bake for some real live entertainment: the little yellow blobs of dough bake up into the most ethereal clouds—it’s a hoot! 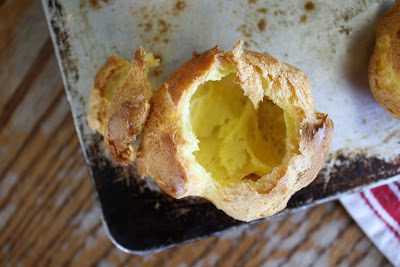 The pastry cream was a little trickier. Pastry cream is just like a custard, except that it’s thicker (so you can cut it with a knife when it’s in a pie), has been stabilized with either cornstarch or flour, and is cooked on the stove top. It’s simple enough to make—the hard part was finding a recipe I liked. 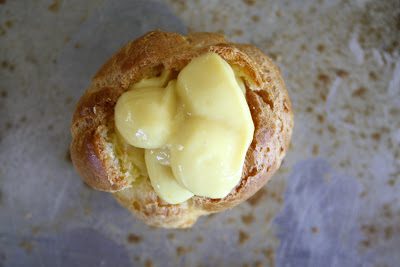 The first pastry cream (crème pâtissière) I made came from Smitten Kitchen. Deb’s recipe used cornstarch as the thickener which gave, in my lowly opinion, too much of a starchy taste.

The next recipe came from a 1998 Bon Appetit recipe that I found on epicurious. It used half and half, less eggs, and just flour, and ended up being my favorite.

For my fourth and last spin with pastry cream, I turned to Julia Child. Her recipe was good, but a tad bit too starchy (it used a whole half cup of flour). Plus, the recipe was fussy. 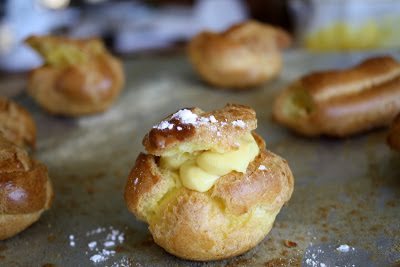 Needless to say, we’ve been subsisting on cream puffs. The kids adore them and pop them into their mouths as fast as I can fill them (the puffs, not their mouths). 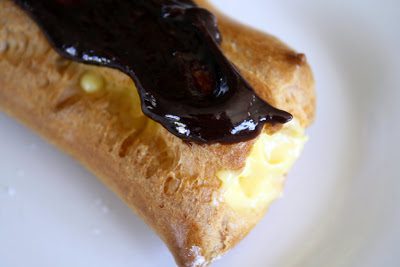 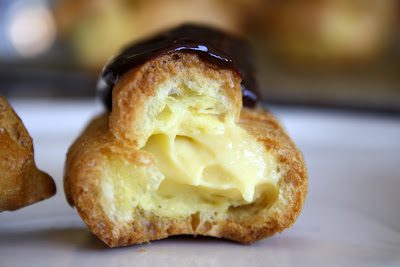 Last night found me sitting on the sofa, whimpering to my (very unsympathetic) husband that all I wanted at that very moment was a cream puff. I needed a cream puff. (I get you now, Kirsten.) Cream puffs complete me.

He said something kind and supportive, like, “Quit your whining, you big baby.” 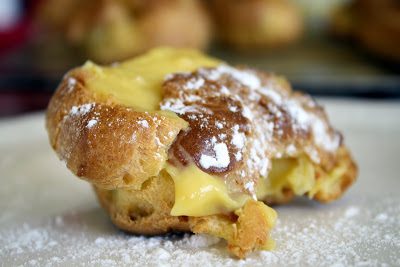 In a heavy-bottomed saucepan, heat the water, milk, butter, and salt. When the butter has melted and the mixture is bubbling, dump in the flour, turn the heat to medium-high and commence to beat the mixture with a wooden spoon. Do this for 2 to 3 minutes—you are cooking the flour. Your arm will feel like it will fall off. (It won’t, don’t worry.) Dump the mixture into the bowl of your kitchen aid, or another mixing bowl, and allow it to cool for a few minutes. Then beat in the eggs, one by one. Make sure each egg is fully incorporated (and then some) before adding the next.

Using a spoon, drop the dough onto a parchment-lined (or greased and floured) baking sheet. You can make the puffs any size you choose—I like mine on the small side. Bake the puffs at 375 degrees for 15 minutes (don’t open the oven during that time), and then rotate the tray and bake for another 10 minutes, for a total baking time of 25-30 minutes.

Transfer the puffs to a baking rack to cool. Julia says it’s imperative that you poke a little hole in the puffs so that the steam can escape—this prevents the puffs from getting soggy—but I didn’t always do that and couldn’t detect any difference.

Using a sharp knife, cut the top off the puff. Fill the puff with pastry cream, place the cap back on top, and dust the puff with powdered sugar or chocolate ganache (a couple tablespoons of hot cream with a half cup of finely chopped chocolate stirred in).

Notes:
*to make éclairs, put the dough into a pastry bag (or a plastic bag with the corner cut off) and pipe the dough onto the lined baking sheet. My pastry bag hole wasn’t bit enough, so I ended up piping three strips to make one éclair. This didn’t work so hotsy-totsy, as the strips tended to peel off of each other. Moral of the story: pipe one really thick strip of dough when making éclairs.
*profiteroles are just room temperature puffs filled with ice cream and topped with hot chocolate (or caramel, butterscotch, etc.) sauce.
*puffs can be filled with all sorts of things, savory as well as sweet. Good savory ideas are chicken, tuna, or salmon salad. Sweet ideas (ha!) can be anything from plain whipped cream to chocolate pudding to fresh berries to jam and cream to the classic pastry cream (recipe follows).
*one of the best things about these puffs is that you can drop them onto a wax paper covered sheet, flash freeze them, and then peel them off the paper and pop them into a bag and back in to the freezer where they’ll keep for several weeks/months. To bake, stick the frozen blobs of dough straight into the hot oven (on the prepared baking sheets, of course) and proceed as normal—just add a few minutes to the baking time.
*baked, unfilled, cooled puffs can be frozen. To serve, thaw and then put them in a hot oven for a couple minutes to crisp them up.

Heat the half-and-half in a heavy-bottomed saucepan. While the half-and-half is heating, whisk the sugar, eggs and egg yolk, and flour in a small bowl. Once the half-and-half is hot, temper the egg mixture with it. Pour the tempered eggs back into the saucepan and bring to a boil, stirring constantly. Boil one minutes, still stirring vigorously. Pour the pastry cream into a clean bowl and whisk in the vanilla. Cover it with a piece of wax paper (to prevent a skin from forming) and place in the refrigerator to chill completely.

Notes (or, ideas and pointers gleaned from my obsessive reading):
*European pastry creams tend to be eggier, thicker, and less sweet while North American pastry creams tend to be lighter, whiter, sweeter, and more custardy. The above pastry cream is more European. It got quite yellow, thanks to our gangbuster eggs.
*If you want a lighter pastry cream, you can fold some beaten and sweetened egg whites into the chilled pastry cream, or perhaps some whipped cream or sour cream. Or so I’ve read.
*For chocolate pastry cream, add a few ounces of chopped chocolate to the finished, but still hot, pastry cream. Keep in mind that the chocolate, once chilled, will make the cream set up harder, so if you’ll be adding much chocolate you may want to cut back on some of the flour.
*For a butterscotchy pastry cream, use brown sugar instead of white.
*Add citrus zests—lemon, lime, or orange.
*Liquors can give yummy flavor, too.
*Once chilled, pastry cream can get a little gloppy. Whisk well before using.
*To fill éclairs, you’ll need to pipe in the cream with a pastry bag.

If this post didn’t provide enough cream puff information to suit you, here are a couple more links: chowhound and wikipedia.