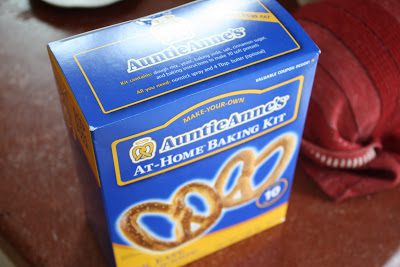 Or at least that’s what the Auntie Anne woman said when she called me last week.

Well, she didn’t say it exactly like that. She said it more like, Hi! I’m so-and-so, director of such-and-such from the Auntie Anne Pretzel Company and I saw the blog post that you wrote on Saturday!

I don’t think she could’ve sounded more sweet and bouncy if she’d been eating a Snickers bar and jumping on a trampoline.

She proceeded to tell me that so-and-so, director of such-and-such, was also in the office with her and, if it was okay with me, they’d like to put me on speaker phone—the door was shut—would that be okay?

I said sure, and we proceeded to have a congenial three-way chat about pretzels and poison. Turns out, the first person I talked to on the phone a couple weeks back gave me false information and the second person gave me no information. Those two things weren’t a problem—at least not for Auntie Anne’s—but then I went and blogged about it, and well, that just wasn’t good PR for Auntie Anne’s. Not that they said that, of course. In fact, they were most gracious, never once requesting that I remedy the false information I’d unwittingly posted about them. And as a final conciliatory touch, they offered to send me a complimentary box of do-it-yourself Auntie Anne’s pretzels, yippee!

Oh, I almost forgot! I suppose I ought to share what I learned about whether or not Auntie Anne’s uses lye with their pretzels. That’s kind of the point of this post, after all.

Well, the cheery ladies were very clear with me: they do NOT use lye. No sodium hydroxide/poison/caustic soda—none whatsoever—in their pretzels. (They do, however, dip their pretzels in a baking soda solution.)

So there you have it. The mystery of the mall pretzels has been solved. They are poison-free! Yay!

Not that I actually think that’s a good thing. I happen to adore the more complicated flavor of a poisoned pretzel. But at least now the truth is out and all you mall pretzel eaters can rest assured that your shop-till-you-drop snack hasn’t been dipped in any toxic substances.

Which means, if you want to experience an authentic German pretzel, you’ll have to don some goggles and gloves and make your own!