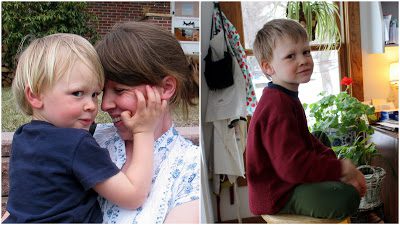 In the shower yesterday morning, I found myself thinking about attachment theory and attachment parenting. Is there a difference between the two?*

I probably have that all wrong. Don’t quote me.

I do feel like I have a semi-firm grasp on what attachment theory is since I took a class under a (spectacular) attachment enthusiast. And I’m quite familiar with attachment parenting—I read lots of those books back in my lactating-and-bed-sharing prime. But what I was ruminating over in the shower was how I think that attachment parenting lacks attachment theory’s big picture and thus it kind of bottoms out in the preschool years. Or at least, from the books I’ve read and the ways I’ve observed it in action, it appears to bottom out then. But this can only be expected when the whole thrust of the theory is aimed at a particular stage of the game. Kids need us to be there for them at all stages of the game, just in different ways.

a cuddle and a time-out

As children get older, the attachment theory question—Will You Be There For Me When I Need You?—becomes more emotional, more fraught. Being present to set limits, encourage, challenge, guide, and teach doesn’t always give us the warm, cozy feelings that we got when toting Junior around in a sling. We are required to look through all the messy behavior—the tantruming, back-talking, eye-rolling, arguing, teasing, lying, hyperactivity—and ask ourselves, “What does it mean to ‘be there’ for my child right now?”

The answers are no longer as simple as a bared boob. And sadly, there isn’t much oxytocin involved.

That’s what I was thinking about while I got my shower yesterday morning.

*For those of you who are on unfamiliar territory with all this attachment lingo, here are a couple definitions (totally in my own words).

Attachment parenting is the belief that kids need to be attached (in a very physical sense) to their parents. This closeness provides security and gives the strength to come into their own as they mature. Or something like that.

Attachment theory is the belief that at every person’s core, there is a need which can be summed up with this question: will you be there for me when I need you? When we feel that answer is ‘yes’ (from whoever it is with whom we are relating), then we feel attached and secure and can function in a healthy way. When that answer is ‘no,’ watch out.