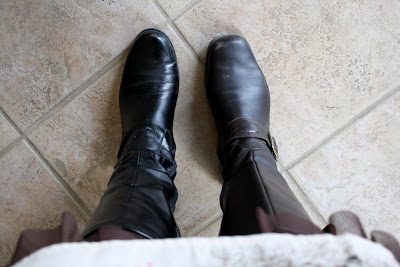 My aunt tells the story of a woman who went all day wearing two different shoes and didn’t notice it till right before her evening’s speaking engagement. At that point all she could do was laugh merrily and point out the mismatch so that everyone could join in the joke.

That story stuck with me, partly because it’s so incredibly preposterous (what sort of woman could wear two different shoes and never even know it? wouldn’t she feel a difference? could a person truly be so absentminded? so careless?), and partly because it speaks to my skirt-tucked-into-panties, run-in-stockings, zipper-down-holy crap! fear of not being completely put together whenever I venture out into public. So every time I think of that addled woman clomping around in her two different shoes for a whole entire day, I chuckle. That poor dear, tsk, tsk.

Yesterday I went to church wearing two different boots, one black, the other brown, and I didn’t even notice my mistake until Sunday school, after the hour-and-a-half-long church service in which I sat in the very front row.

I repeat: I WENT TO CHURCH WEARING TWO DIFFERENT BOOTS AND I SAT IN THE VERY FRONT ROW (to boot).

It wasn’t like I was wearing pants or a long skirt, either, oh no no no. My knee-length poofy skirt stopped a few good inches above the boot tops so my boots, in all their mismatched glory, were 100 percent visible.

And I had no idea. I never even noticed they felt different (which they do—the brown ones are more comfortable than the black).

(This extreme cluelessness brings to mind the bizarre tales of full-term pregnant women pooping out a baby in the toilet and then claiming they had no idea. I always wrote those women off. But now, after yesterday’s mishap, I’m not so sure…) 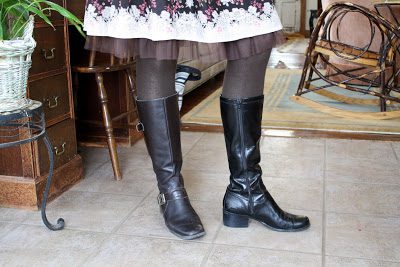 It wasn’t till Sunday school that I discovered my mistake. Getting ready to seat myself, I happened to glance down at my feet, and— I froze. I sucked air. I let loose a series of half-whimpers, half-shrieks, “I don’t believe—! I’m—! Two different—!”

“They say people only look at other people from the thigh up,” one kind soul offered. Another woman untucked her feet from under her chair to double check her shoes. (They matched.) Everyone smiled and chuckled, but then the discussion turned to other things (clearly, they did not comprehend the enormity of the situation), and I was left sitting there in my two different boots, attempting to exude a sense of calm.

However, it’s pretty darn near impossible to pretend you posses any semblance of equanimity when you’re wearing two different boots.

So every now and then when a huge smile threatened to split my face, I’d duck my head and shake it ruefully from side to side, all my insides—my very veins—jiggling with an overwhelming attack of the giggles.

It wasn’t until we were in the car and half-way home that I pointed out my miss-booted feet to my husband and kids. They howled, and John struggled to keep the car on the road and study my feet at the same time. I hoisted them up on the dashboard to make it easier for him.

Mom and Dad had arrived at our house for lunch before we got home, so, “Shhh,” I told the kids. “Don’t say anything and let’s see if Grandmommy notices.” (I knew Dad wouldn’t. He’s notorious for not noticing haircuts, gaudy earrings, and painted fingernails.)

I sashayed into the house, brown heel-black heel clicking on the tile floor, and hugged Dad and Mom. “You like my outfit?” I asked Mom. She admired my skirt, one she had scavenged for me from a thrift store, and turned back to the table where she was assembling platters of meats and cheeses for our sandwich feast. The kids and I exchanged glances. Mom smiled away, oblivious. And then my younger daughter piped up, “Did you see her boots?” 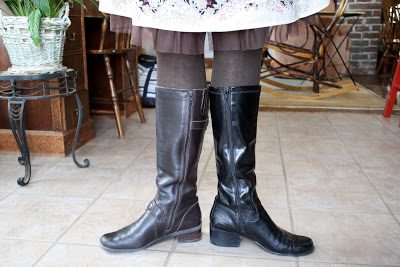 Mom turned around again and looked. She double-taked. She gaped. And then, and then! The gut-wrenching, foot-stomping laughter completely overtook. We roared and wailed, sobbing with hilarity, ricocheting off door frames and tables, hanging on to each other, rocking and shaking, our shoulders hunched, breathless, eyes brimfilled up with tears.

Of all people, I knew my mom—a woman who leaves the chicken out of the chicken noodle soup, who sits on her glasses and smashes them flat, who boils kettles of water dry—I knew she would get the humor. I was not disappointed.

So now my aunt’s story has been replaced with a new one, the story of one crazy-addled woman who wore two different, knee-high boots to church one Sunday. The poor dear, tsk, tsk.

This same time, years previous: a meaty lesson, foods I’ve never told you about, physics lesson (it’s horrifically windy again today—what is it with this time of year?), slow thinking