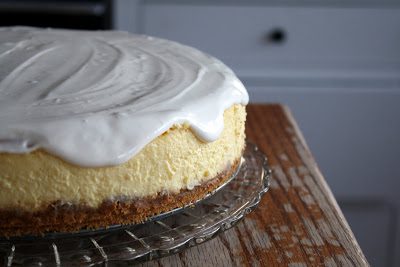 It all started when I read the post in which Elise wrote about her friend’s cheesecake, purportedly the perfect cheesecake. This claim, in and of itself, did not get my attention. Lots of people claim to have the best cheesecake in their repertoire, but usually their recipes are loaded with things that I don’t consider appropriate for cheesecake. Zests and spices have no place in the realm of classic. Don’t even bother to mention pumpkin, liquors, and chocolate. All those things are good, no doubt, but they do not belong anywhere close to a classic cheesecake. I like my cake bare bones—just cream cheese, sugar, eggs, and vanilla. I’m a cheesecake purist.

But this cheesecake of Elise’s young friend, Audrey, was remarkably similar to mine. It was the same ingredients mostly, just in different proportions and with some interesting techniques, namely, double-wrapping the pan in foil and baking the whole cake directly in a large pan of boiling water. Clearly, I had to give it a go.

So I did. And I liked it. I like it a lot. I liked that the crust was just on the bottom of the pan, not running up the side like the crust in my recipe. With less crust, more of the pan was available for the creamy cake. This was a very good improvement indeed.

I liked that the cake had heft. Just holding the pan in my hands, I could tell it was a cake to be reckoned with.

And the cake itself was creamy and very dense.

I liked—no, loved—the tang of sour, thanks to the addition of sour cream to the batter.

The cake wasn’t as sweet as mine. I liked that, too. 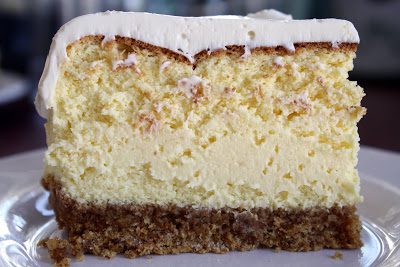 But there were things I didn’t like. I didn’t like that the crust was so soft and dry, and there was still too much of it. I was on the fence about the almost straight-up sour cream topping—could there be such a thing as too much sour cream? And I wondered if the cake might be missing some lightness due to the fact that the egg whites weren’t separately whipped and then folded in.

Clearly, I was left with no other option. I had to make another cheesecake.

(Of course, this whole question of which cheesecake takes first place is really just an exercise in hair-splitting. When it comes down to it, you can’t go wrong when you take a set of beaters to cream cheese, sour cream, and sugar. But I’m wanted to get it as right as Right could possibly be.)

The second time around I used my recipe, but with some changes. I cut back on the amount of crust, patting it just on the bottom of the pan, and I adding a half cup each of sour cream and whipping cream to the batter. I used my recipe for the topping, too.

The result? I’m not sure! Last night, after doing some solo analyzing during the afternoon, I begged and pleaded with Mr. Handsome till he agreed to do a taste test with me. (The trials I put that man through!) I put a fraction of a tiny little sliver from each cake on two plates, Audrey’s cake on one side, my played-with classic cheesecake on the other. We nibbled. We pondered. We contemplated. And I peppered him with questions, milking him for all the feedback he was worth.

What do you think of the cake, the inside part? Which one is creamier? Which flavor do you prefer?

And, How about the topping? You like the lighter one? Really? 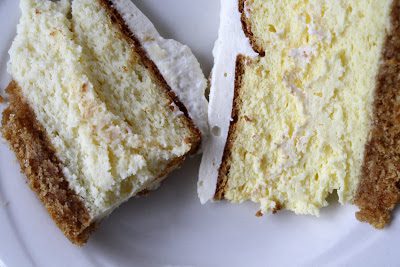 Can you see the differences? The one on the left has a crunchier crust, a more aerated filling, and a frothier topping. I like the one on the right better.

He gamely answered my questions, doing his best to help meet my deep-seated need to find cheesecake perfection. Once he sighed heavily, contemplating the cost and calories loading up the fridge, and then said, “Well, pack up a big slice and I’ll take it with me to work tomorrow to share with everyone.” I poked him in the ribs and hissed, “You secretly like it that your wife is going to figure out the best cheesecake!” and he grinned sheepishly.

There is still too much crust and the recipe makes too much sour cream topping (put the extra in the Sunday waffles), but. But. 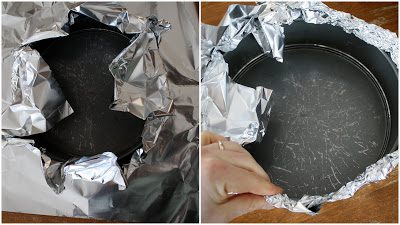 The baking method, poaching the cake, is brilliant. It gets the cake as moist as moist can be. I think it’s a mistake to whip the egg whites the way I’ve been doing all along. It adds too much air and makes the cake almost crumbly. I like that she uses less sugar and adds sour cream—this is not a confection you are indulging in, it’s a cheesecake all the way, baby. 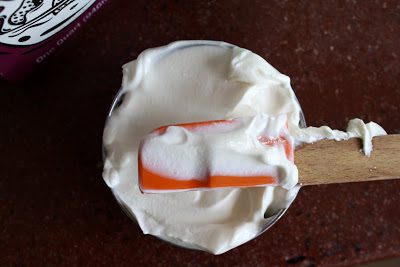 Most of you probably think that I’ve lost all of my senses, obsessing over cheesecake like so, but I beg to disagree. If I was truly crazy, I would make a cheesecake yet again—Audrey’s recipe but with a few tweaks (mostly the crust and topping issues)—so that I could give you The Final Perfect Cheesecake.

But I’m not that crazy. What I’m going to do is give you The Perfect Classic Cheesecake recipe as is, with a few of my changes written in. And while I’ve never made the recipe exactly how I’m writing it out, I’m certain it will be absolutely fine. I ought to know, after all this excruciating scrutinizing. 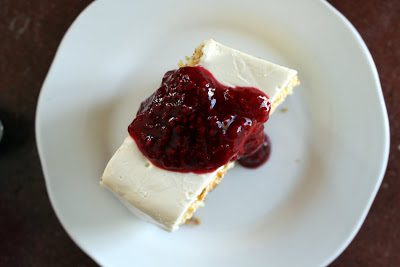 The raspberry sauce is not to be missed. At first, when my mom heard I was making the sauce, she pooh-poohed me most vigorously.

Cheesecakes don’t need sauces, she lectured. All that fruit is just peripheral. It detracts.

Later, after I sent some cake along when we met to fetch back the little kids, she actually got to eat some. When she called me next time, she was singing a completely different tune. 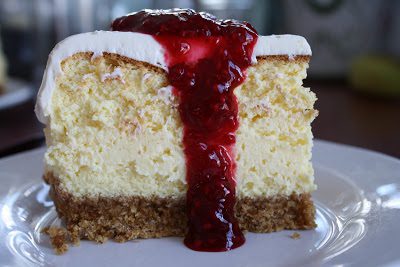 This cake improves with age. Make it a day (or even two) ahead of time.

Prepare the pan:
Set your 10-inch springform pan on a large square of heavy-duty aluminum foil. Gently pull the piece up around the outside of the pan. Repeat with a second square of foil. Crimp (scrunch, press, and fold, whatever works) together the two pieces of foil. Be gentle—any holes will prove disastrous.

Stir the crumbs and sugar together. Using a fork, mix in the melted butter. Poor the crumbs into the baking pan and spread them around evenly. Using your fingers, press the crumbs down firmly. Bake the crust at 350 degrees for 10 minutes.

Cream together the cream cheese, sugar, and salt. Add the eggs one by one, beating after each addition. Beat in the vanilla and sour cream. Beat in the whipping cream. Pour the batter on to the baked crust.

Set the cake on another pan, one that has sides, and fill the outside pan with boiling water. You want the water to be about ½-inch high. Bake the cake at 325 degrees for 1 ½ hours. When done, the cake should still be a little wobbly in the middle.

Prop open the oven door just an inch (I wedge it open with the handle of a wooden spoon) and allow it to cool for another hour. Remove the cake from the oven and its pan of water. Remove the foil wrapping. Tent the cake with a clean piece of foil and chill it in the fridge for a couple hours. When the cake is completely cool, spread with the sour cream topping and return to the fridge to chill some more. To serve, run a knife around the edge of the cake before removing the sides. Serve with raspberry sauce.

Stir together the sour cream, powdered sugar, and vanilla. Spread it on top of the chilled cheesecake. (You will probably have extra.)

Put all the ingredients in a heavy-bottomed saucepan. Mash the berries with a potato masher or the back of a spoon. Stirring frequently, heat the sauce to boiling, and then reduce heat and simmer for about five minutes, or until the sauce is starting to thicken. Cool to room temperature and store in a covered container in the refrigerator. To serve, apply liberally to cake.