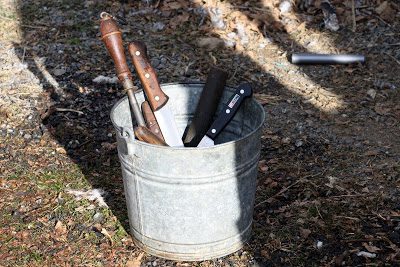 Warning: this post is heavy on blood and guts.
If these things turn your stomach, run away fast.

“Howdy, neighbor! I’ve been wanting to talk to you!” halloed Gale. I was passing by their place on my afternoon walk, and as he tromped up through the field, I swung over to the other side of the road to meet him. “I just wanted to tell you that we’re butchering the Saturday next and ya’ll are more than welcome to come.”

And so, this morning, we did. The kids were up before daybreak, chattering with excitement. They hustled through their bowls of granola, jumping up to run to the back door every two minutes to check on the neighbors’ house. “Another car is driving in!” they’d holler. Or, “the big outside light is on!” Shortly after seven, all six of us were heading down the road, eyes watering from the cold despite being bundled up to our eyebrows. 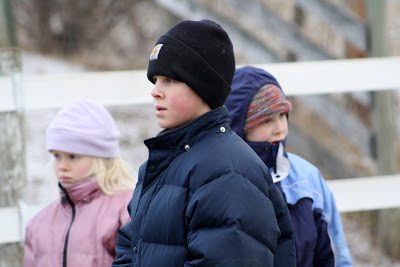 It’s a three-ring circus! For free!

When we arrived, the first of the six hogs was already being scalded and scraped. Fires were burning, tables were set up, and men were milling around. Things picked up speed right quick. Soon there were three pigs hanging, another being scraped, and yet another was in pieces on the cutting-up table. 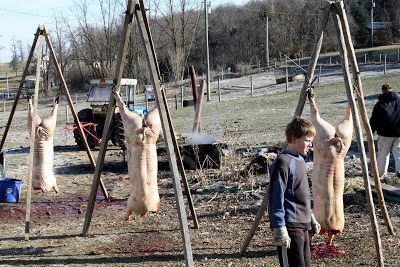 This was the second pig butchering I’ve seen. The first was at our local butcher shop, and while both were community efforts (in the sense that a local butcher shop is part of the community), the scenery was totally different. The shop was professional with its concrete floors, bright lights, white coats, and tons of stainless steel. Today’s butchering was down-home and earthy with the frozen ground, wood fires, cast iron kettles, and sun shining through the clouds of steam and smoke. 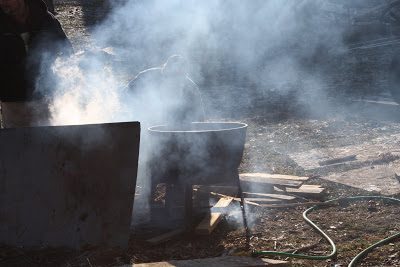 They shot and stuck the pigs quite a bit a ways from where we were. Sweetsie held my hand the first time, scared the pig would scream. There was no noise, however—just the gun’s dull pop, and then the big pig was flopping around on the ground. 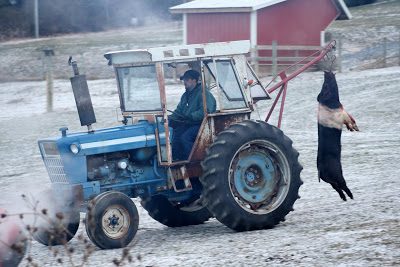 A tractor hauled the slaughtered pig down to the dipping station where men used ropes to lower it into the tub of 162 degree water. 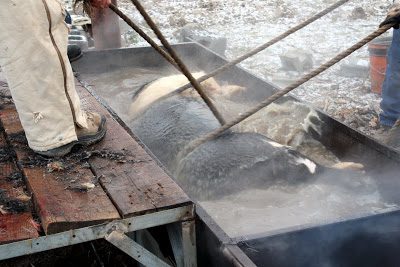 After a couple minutes of swishing and a great heave-ho, it was hoisted back onto the platform where a bunch of men rapidly scraped it clean. 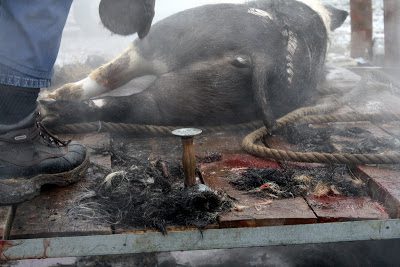 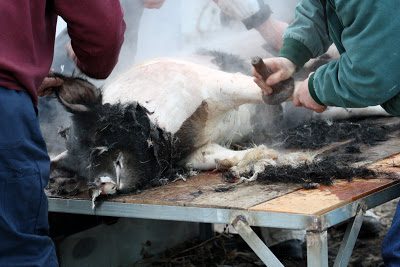 The pig was eased to the ground and some men drug it to one of the tripods. 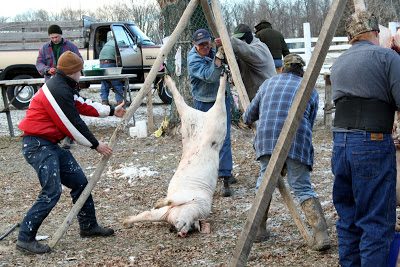 After it got strung up by its hind feet, it had a quick hose-down and some touch-up scraping. 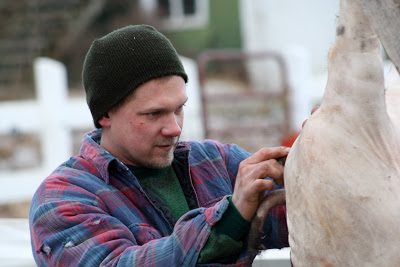 Then the cutting commenced. First to go was the head (I am sparing you those pictures) which got lugged over to the head station to get cleaned up (i.e., dissected). 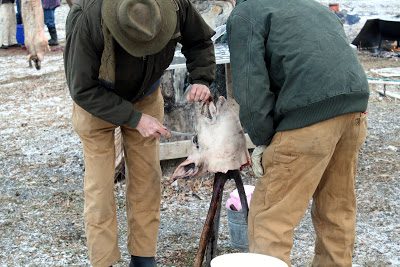 The snout tips and eyeballs got tossed into the grass, but not much else got thrown away. The tongue, ears, head meat—all of it got thrown into the pudding kettle.

As for the actual gutting, it was totally fascinating. They started cutting up around the tail (the top), first tying off the rectum and then separating the organs and innards from the abdominal cavity. Then someone helped hold all the innards in place while more cuts were made down around the heart. Once most everything was cut free, the whole mass splashed into the bucket below. The heart, liver, and pancreas—those all got saved. 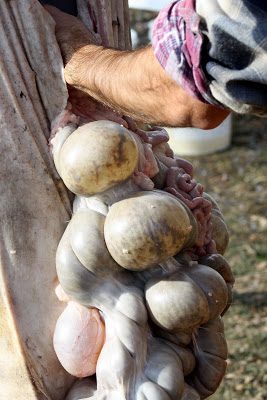 This might sound rather odd, but I found the innards, the perfectly shaped orbs and spheres, the billowing balloons, to be rather beautiful.

Our neighbors generously let our friend Sam, who they didn’t know from Adam, butcher his pig with them. Last night Sam’s dog attacked one of his pigs and wounded it severely enough that it couldn’t wait another couple weeks till its intended butcher date. Sam brought Lee, my distant cousin and member of our church, along to help with his pig. 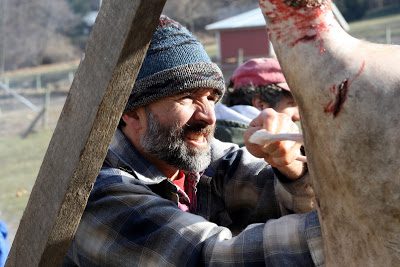 Lee has ten hogs worth of experience under his belt, so he knew what he was doing. 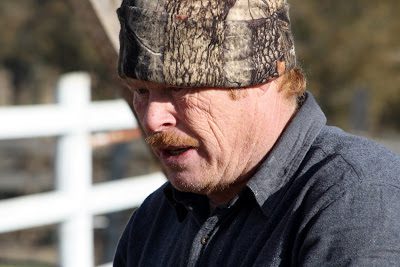 Though he couldn’t hold a candle to the man who had been butchering pigs since 1968. That man knew everything. When he helped Lee with Sam’s injured pig, he showed us how the kidneys had dark spots caused by the trauma of the attack. One kidney, the one that was on the injured side, was much worse than the other. Amazing, no?

Anyway, Lee is also a science teacher and he seized the opportunity to educate all us novices clustered around, both young and old. 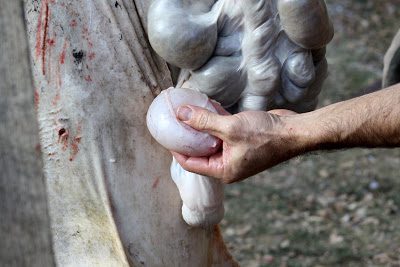 He showed us the bladder. The “pee sack,” I think he called it. 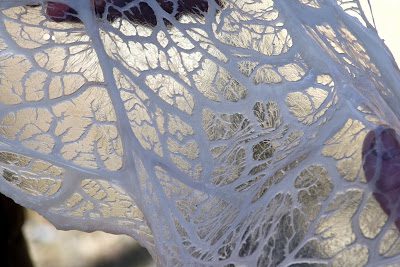 Running all through the intestines were sheets of lace, otherwise known as the capillaries. (Yes, they will also get eaten.) 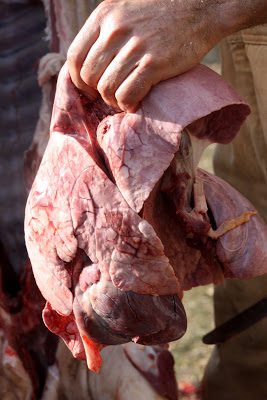 Then there were the lungs and heart. 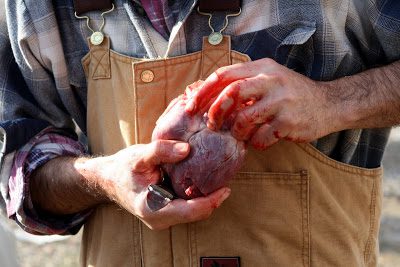 Human hearts and lungs are similar to those of pigs, though ours are smaller, of course. 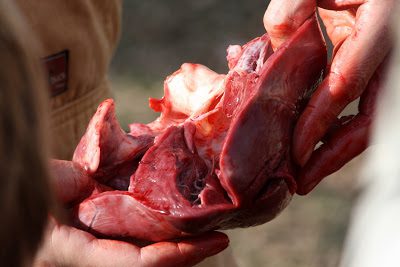 Lee cut into the heart and expounded upon the ventricles and aorta, etc.

But for the lungs, he went all out. 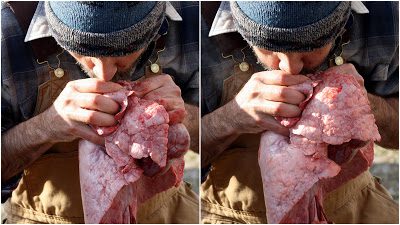 After wiping off the trachea, he put his mouth on it and puffed air into it, first one side and then the other. 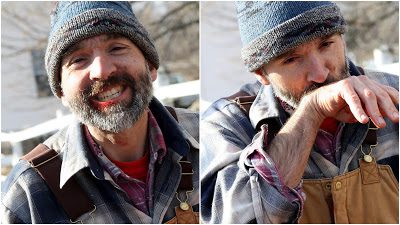 The whole thing expanded dramatically—it was absolutely fascinating … and hilarious. 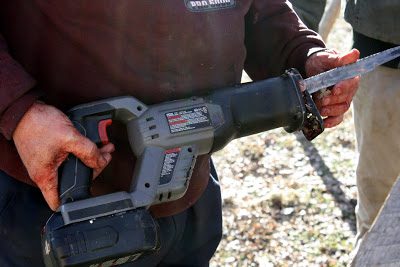 After the gutting, the backbone was sawed/hacked/axed out, and the carcass cleaved into two pieces. 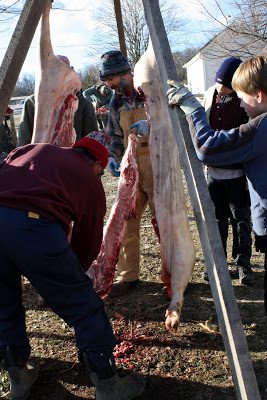 The halves were laid across shoulders and carried to the cutting-up table. 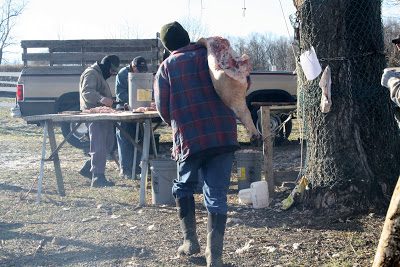 The fat gets rendered into the lard, and there will be hams and sausages, ribs and tenderloin. 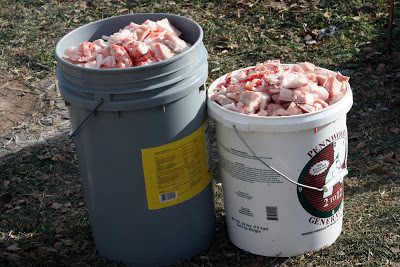 I made only two trips down to the butchering during the morning—the kids were freezing cold, and I had sweet rolls (not sweetbreads!) to bake and a couple extra children to babysit—but Mr. Handsome stayed the whole day. Maybe he learned enough that we’ll be butchering our own pigs in a year or two. 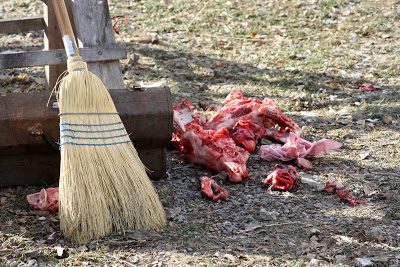