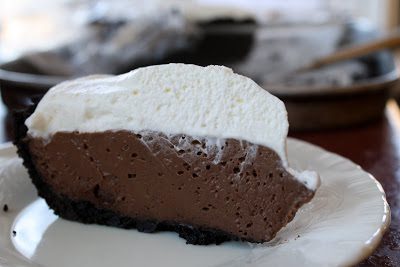 I just made the executive decision to take the two oldest kids to the Blackfriars Theater tonight to see The Malcontent. I am so excited that I can hardly focus on my writing for the few remaining minutes of rest time.

Or maybe it’s the piece-and-a-half of chocolate cream pie that I swoon-gested right at the start that’s giving me the jitters.

They’re happy jitters, though, so I’m not complaining. (Clarification: saying “the piece-and-a-half” of pie is just a more reserved way of saying “two pieces of pie—one small, one large.”) 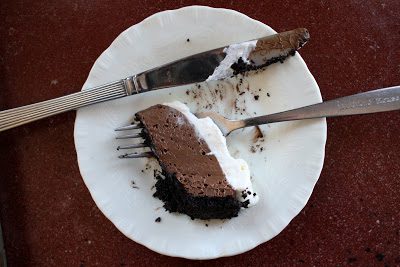 The chocolate cream pie would have been made the day before yesterday if it weren’t for Mr. Handsome. He forgot to turn over the piece of paper upon which he had scrawled my dictated-via-the-phone grocery list and so he didn’t buy the Oreos that were needed for the crust, thus letting the whole family down with a thud. We were crushed.

He made things right the next day—the day we would’ve been making the pie if it weren’t for his poor list-reading skills—so finally, yesterday, I got to make that pie. You know, the one I got out of bed for. I wasn’t too thrilled with it, the first couple eats around, but by last night’s taste test (and-a-half, again), I was sold. Today I got even more sold. This pie does some serious rockage. 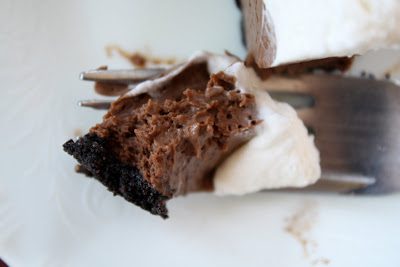 Chris and Julia made a big deal about removing the chalaza—the stringy, white membrane—from the egg yolks. They say if you do that ahead of time, then there is no need to strain the custard for lumps afterwards, since it’s that membrane that causes lumpies. It sounded persnickety, but I did it anyway and it was a lot easier than I thought it’d be. The resulting custard is so blissfully creamy that I have nothing to say, except—get rid of that chalaza!

And one word about the crust: disregard any do-it-from-scratch notions and go for the Oreos. They make a lovely crust, one that softens just a little—by Day Two, it’s almost creamy.

Put the Oreos in a food processor and pulse until finely ground. Dump the chocolate crumbs into a bowl and add the butter. Stir with a fork. Pour the crumbs into a 9-inch pie plate. Using the back of a spoon or the bottom of a measuring cup, press the crumbs evenly across the bottom and up the sides of the plate. Do not press any crumbs onto the lip of the pie plate (like Chris says to do—it just doesn’t work). Chill the crust in the fridge for an hour or two.

Remove the chalaza from the egg yolks (see above) and put them in a bowl. Add half of the third cup of sugar and the cornstarch and whisk well.

Put the half-and-half, the remaining sugar, and the bit of salt into a saucepan and heat it almost to the boiling point. Temper the egg yolks with ½ cup of the hot half-and-half. Add the tempered eggs to the saucepan, return it to medium-high heat, and whisk like crazy. As soon as the custard thickens and just starts to bubble, remove the pan from the heat. Add the cold butter, one chunk at a time, whisking hard after each addition. Add the chocolate and whisk till all the chocolate has melted. Whisk in the vanilla.

Pour the chocolate custard into the chilled pie crust, cover with plastic wrap (pressing it down flush on the custard so no skin will form), and chill for 6-12 hours. (The longer the better, in my opinion).

Top with whipped cream and serve.

Note: I linked up with Sweet As Sugar Cookies. If you need more sweet inspiration, check it out!