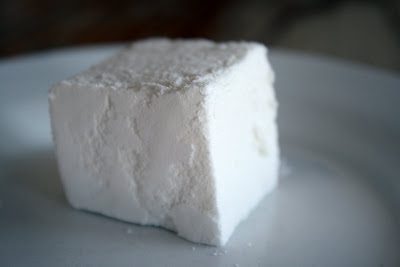 Sunday afternoon, while waiting for Mr. Handsome to wake up from his lazy snooze so that he could drill some holes in some coins (the drilling is proving to be too difficult/dangerous/detailed for Yo-Yo to manage, what with all the breaking bits and slippy-slide-y metal) so that I could make some jewelry (which I then listed on Monday morning and promptly sold one of the pieces before I even had time to turn around—wheee!), I decided to make marshmallows.

Marshmallows have been swarming the bloggy food world for months, but I’m just now catching on. I’ve wanted to make them. In fact, I’ve thought about them quite a bit, but I never could bring myself to do it. I’m a tad bit scared of gelatin, and I try to avoid corn syrup, and since marshmallows only run a buck a bag at the store, it was just much easier to buy them when the urge arose than to worry myself with strange ingredients.

However, every time I read a new post about marshmallows (like this one or this one), my desire to make them would come sneaking out of the recesses of my mind to stand there in the middle of my mind wringing its puffy, white hands till I flapped my arms and stomped my feet in its general direction, sending it scuttling back into its hiding place again. Harumph. 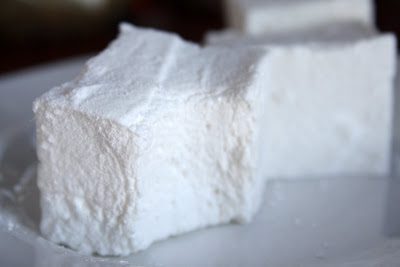 But then I read Tara’s post and my little marshmallow urge came boldly striding out to claim center stage, jutting its chin at me as if to say, Try and scare me off THIS time.

I know when I’m beat. I curtsied demurely and then headed out to the kitchen where I dug the bag of gelatin out of the cupboard and plugged in my Kitchen Aid mixer.

(Tell me this: is it normal for a person to personify her thought patterns? Because I seem to do it all the time…)

The cooking process for the marshmallows was straight forward and simple, but halfway through I started to have some serious doubts. See, the marshmallow goo gave off the unmistakable and dismaying odor of, of …of a barnyard. Every time I leaned in close to the thrashing mixer and breathed deep, visions of horses’ hooves clopped through my mind. It was disturbing, to say the least.

Perhaps this, talking about horses’ hooves while eating marshmallows, is considered untactful? Perhaps it makes my kitchen sound gross? Perhaps no one will ever want to eat at my house again? (And did you catch the tweet about how when I turn my oven on it gives off an intense urine stench?) All this talk of pee and manure makes me sound right high-class.

But it’s true! And I’m all about being candid. I mean, I wouldn’t want you to try to make marshmallows, catch a whiff of barnyard, and then lose sleep wondering if you were the only one.

Besides, I like to drag everyone down into my miserable mucky mess with me. 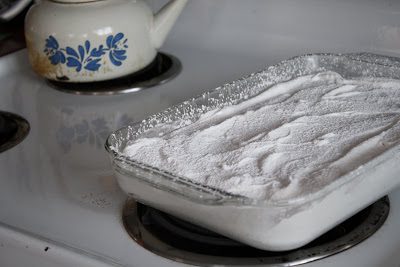 This tale of weirdness has a good ending, though. Once I added the salt and vanilla, and by the time I dumped the whole satiny, voluptuous cloud into the pan to cool, all traces of equine odors had dispersed and I kept myself happily employed licking bowl, spatula, and whisk. Amen. 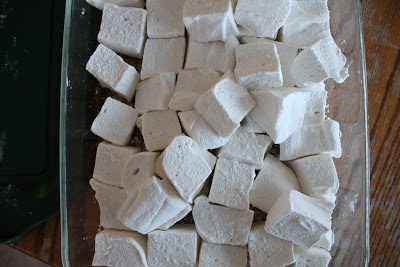 When it came time to flip the pan of marshmallows upside down and cut them up, the entire family gathered ‘round. They oohed and aahed most appreciatively. I doled out tastes.

Mr. Handsome was floored in a most gratifying way. He said things like, “They taste like marshmallows! Really!”

And, “They’re way better than the store kind.”

What with all the praise and sugar, I was flying high.

Right then and there I mixed up a pot of hot chocolate (‘cause it’s what you have to do when you make marshmallows) and served everyone a mug (adult mugs got spiked with Bailey’s), a fat marshmallow floating on top. It was perfectly glorious. 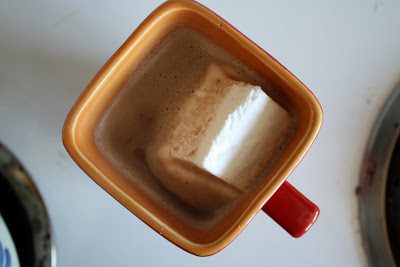 And then yesterday afternoon I had to make myself another cup of hot chocolate so I could take a picture for you all (because it was dark when I did the family hot chocolate thing) and of course I had to spike it so you would get the full effect (you can totally see the difference in the picture, right?) and then I sipped and clicked my way most merrily through my chocolate-y, creamy, marshmallow-y hot toddy. 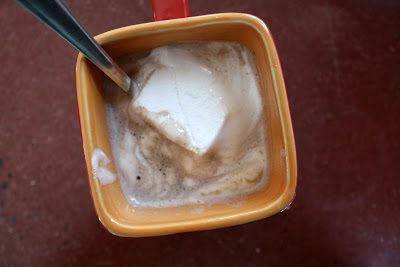 Marshmallows
Adapted (only a little) from Tara of Seven Spoons

This are delicious plain but their true spectacularness comes out when set a-float a mug of hot cocoa. Do it.

If you want thinner marshmallows, divide the mixture between two 9×13 pans.

Marshmallow variations, yet untried (but not for long): an egg white-less version, toasted coconut, peppermint or almond.

And how about dipping them in chocolate? Yes!

Note: for updated information, changes, adaptations and the like, go here.

Sift together the powdered sugar and cornstarch. Grease a 9 x 13 pan, sprinkle the bottom and sides with some of the sugar-cornstarch mixture, and then set both bowl and pan aside.

Measure ½ cup of cool water into a bowl and sprinkle the gelatin over top. Set aside.

Measure the remaining ½ cup of water, the white sugar, the corn syrup, and the salt into a heavy bottomed saucepan and, stirring occasionally, bring to a boil. Reduce the heat so that the mixture simmers steadily, attach a candy thermometer to the side of the pan, and allow the mixture to simmer, undisturbed, till it reaches 240 degrees, or the soft ball stage. It should take about 12 minutes.

While the syrup is simmering, put the three egg whites into the bowl of a kitchen mixer. (You can do this with a hand-held mixer, but you will be holding that thing for about 15 minutes. It won’t be difficult, but it will be tiresome.) (On the other hand, if you’re scared you’ll burn up your Kitchen Aid [because 15 minutes is a long time], it’s better to use a hand held mixer.) Beat the egg whites till soft peaks form.

When the syrup reaches 240 degrees, take it off the heat and stir in the gelatin.

With the mixer set on medium speed, slowly pour the syrup in, down the edge of the bowl. (If it gets into the blades, it will splatter viciously. Be careful.) Once all the syrup has been added, turn the mixer to high and let it whip frantically for the next 12-15 minutes. The goal is to bring the mixture down to room temperature and to thoroughly fluff it…and then some. Add the vanilla and beat for another minute.

Pour the marshmallow goo into the prepared pan, and, using a lightly oiled spatula, spread it out as best you can. Sift some more of the cornstarch/confectioners sugar mixture over top. Let the mallows rest for several hours to set up.

Run an oiled knife around the edges of the pan and turn the sheet of marshmallows out onto a dusted (sugar-cornstarch mixture again) cutting board. Cut them (using an oiled kitchen scissors or sharp knife or pizza cutter) into the desired size. Sprinkle (or roll) the sticky sides in the sugar mixture before storing in an airtight container.