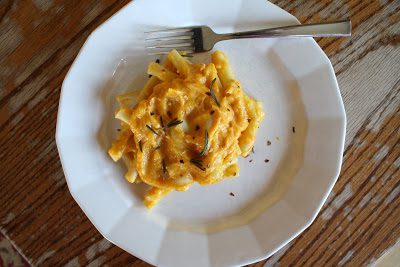 Friday night I got another migraine. I was cooking supper, feeling all sorts of splendid because it was Friday and I was making a kick-butt supper and Mr. Handsome had taken all the kids with him to run some errand because I couldn’t stand to have them under foot for one more cotton-pickin’ minute, when I suddenly noticed that my kitchen was peppered with bright lights and black spots. This time I knew exactly what was happening and I didn’t waste a second. I popped a double dose of painkillers and then called up a friend to pick her brain for more preventative measures. She recommended natural peppermint oil in water, which I did. And then, even though I knew intense nausea was in my near future, I ate.

I really couldn’t help myself. I was so excited to eat. (Picture an impatient puppy dog bouncing about on the balls of his feet while he waits for you to scoop out his portion of Puppy Chow. I’m like that puppy. I get all tail-waggy when food is around.) Plus, I was hungry and I still felt fine.

My stomach stuck out to China and I didn’t care.

The headache pain did come then, but it was dulled, thanks to the pills and peppermint, and there was no sign of nausea, glory be. I took a leisurely soak in a hot, epsom salt-infused bath. (Though thanks to childbirth, tub soaks always bring back sharp memories of sore bottoms—the mere act of easing myself into warm water makes me feel All Ouch. My children have ruined me. They should be arrested.) And then I crept between the covers and slept for 10 blissful hours. A low-grade headache persisted the next day, but it was nothing compared to the last miserable round. Nothing. I may be wising up.

There’s something else I’m wising up about: pumpkin pasta. Or rather, a creamy pumpkin sauce over pasta. That the sauce, the one I was making when I lost my vision, coincided with my victory over a migraine is just that, purely coincidental. But it feels providential. I mean, really, there were fireworks. I saw them!

I’ve seen recipes for creamy pumpkin sauces all over the place, and I’ve even tried one or two, but I was never very impressed. The pumpkin sauce was always too bland and/or watery and/or pumpkiny. (The one that I already have on this site has sausage in it—not the straight-up pumpkin sauce I’ve been looking for.)

But then I made this sauce and, well, you’ve already read about the pot-swiping and repeat-dishing. It’s nothing short of stupendous, richly flavored with Parmesan and rosemary and bolstered beautifully by the addition of a little vinegar. I know! Vinegar! I never would’ve thunk it, but it dost sparkle up the dish considerably. 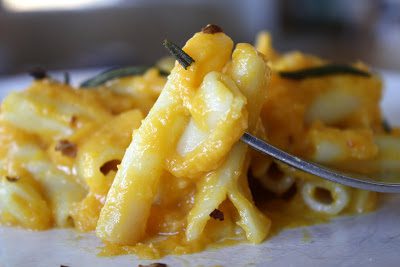 I used butternut squash for this recipe (directions for roasting are here), but I think a combo of carrots and sweet potatoes could be blended up along with the pumpkin.

Cook the pasta, drain, and set aside. Reserve 2 cups of the pasta water.

In a heavy-bottomed pan, fry the rosemary in the olive oil, but do not let it brown. Scoop the rosemary out of the oil and set it on a napkin to drain. Carefully (the oil is hot!), stir the remaining ingredients into the oil. Stir in a cup of pasta water, adding more only if you want a thinner sauce. Taste to correct seasonings before tossing the sauce with the pasta. Garnish with the fried rosemary and extra red-pepper flakes.