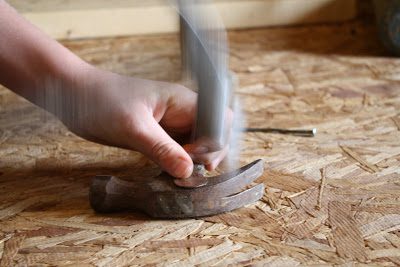 I’ve been on the lookout for a pendant necklace, something simple, classy, and earth-toned. I even spent valuable shopping time perusing the discount jewelry at Kohl’s. I found nothing, not even when, in desperation, I searched the regular priced racks.

Not even a week later, Mr. Handsome pulled a smashed penny out of his jean’s pocket and passed it around the dinner table. He had been working on a house that was located smack-dab beside some railroad tracks and, on a whim, had sacrificed a coin to the chugging choo-choo.

Before the dishes were even cleared from the table, the kids were out in the barn, bashing their money senseless. I thought nothing of their new game until Yo-Yo walked into the kitchen and handed me a smashed gold dollar. Immediately, I seized upon it. “This is exactly what I’ ve been looking for! It would make a perfect necklace. Can you punch a hole in it for me?”

“Sure,” he said, all nonchalant-like, and he did.

I stuffed two coins—the smashed gold dollar and a smashed quarter—in my purse and next time I was out shopping I swung by Michaels to look at their chain selection. Totally overwhelmed and confused by the endless options, I gave up almost immediately, deciding instead to take the coins to the next belly dance class to show Rose, the instructor. She makes chainmail, among other things, in her spare time, so I figured if anyone would know how to make a necklace, it’d be her.

And so it came to be that a couple days and a phone call later, Yo-Yo had an order for twenty smashed pennies. 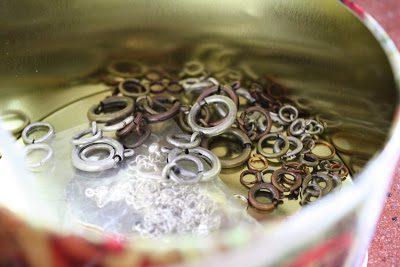 I headed to town yet again, this time armed with Rose’s jewelry-making directions, as well as the Penny Smasher himself (and the two littles who did an excellent job keeping their grubby little paws stuffed in their pockets). Our first stop was the bank for two rolls of pennies, and then on to a little shop downtown where Yo-Yo and I poured over chains and jump rings. The shop owner listened intently to Yo-Yo’s plans, and then drew pictures and made lists for him. Yo-Yo asked questions and stated preferences, nodding sagely (our shaggy-headed-and-sweatpant-clad little businessman) at all the advice. Several hours later, after a visit to Michaels for more chains and clasps, a stop for some bagels, and some fancy maneuvering of a needle-nosed pliers back at our kitchen table, I had my new pretty fastened round my neck, and boy oh boy, was I ever tickled. 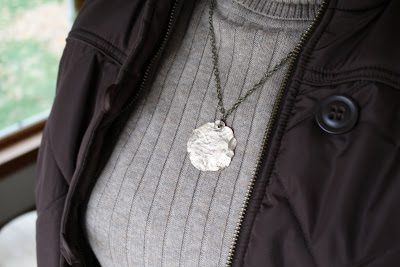 Yo-Yo’s shop has been upgraded from barn to basement, and the new space is all decked out with a workbench (a board atop two logs), space heater, and radio. Mr. Handsome set him up with a drill (nail-punched coins crack and split too easily), and just yesterday he brought home a piece of angle iron for a new and improved pounding space. 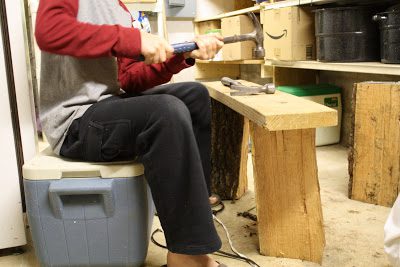 Now Yo-Yo spends most of his free time below ground, pounding and drilling to his heart’s content. Through my kitchen floor, over the ring of metal on metal and the twang of the country singers, I hear Yo-Yo’s happy whistle. Every now and then he trots his creations up to the kitchen for me to inspect, and then together we arrange and fashion the jewelry.

I’m not yet sure what the point of this venture is (etsy anyone?), or even if there needs to be a point. Just having fun together, making something new, savoring our creative genius (the term “genius” being used quite loosely here)—perhaps that’s the point for now. It’s more than enough. 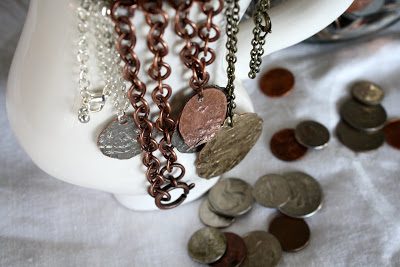 (That the jewelry just happens to be dandy-nifty is a pretty sweet bonus.)