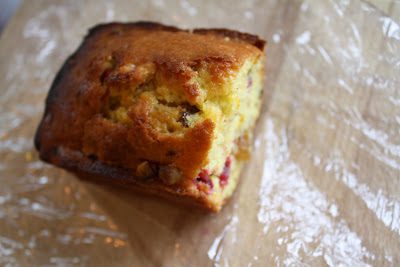 Remember last January how I kvetched right and left about not being able to find cranberries anywhere? I had a hankering to make cranberry sauce post holiday season but it was impossible. There were no cranberries to be found, not even in the freezer sections of the grocery stores. Which is ridiculous because cranberries freeze beautifully. In a fit of ill-temper brought on by thwarted cranberry hopes and dreams, I scrawled on the little square that stood for November 15 in my 2009-2010 pocket calendar: BUY SCADS OF CRANBERRIES.

Myself Of Ten Months Ago would be please to know I have been doing just that. Whenever I walk into a grocery store I pick up several bags of cranberries and, upon returning home, promptly plunk them into a larger bag and ship them down cellar to the freezer. I’m a cranberry buying queen machine.

Which is good because cranberry sauce and cranberry white chocolate cookies and cranberry juice and cranberry bread are delicious all year round, not just in November and December, so if you feel even one wink of partiality to the cranberry, I suggest you get thyself to the nearest grocery and start stashing.

This bread was another reason, besides the relish, I was itching for cranberries. My mother had served it to me one long distant time ago and I strongly recall (all my memories are of super-strength quality—most of the time—when they involve food) thinking it was the best cranberry bread ever.

So this fall, once I got me some cranberries, I rang my mama right up to ask for the recipe. “Mom,” I said, says I, “Could you give me the recipe for that cranberry bread?”

No, I didn’t know, but as soon as I did know, I experienced a Happy Jive Moment. See, Mom and Dad and their friends Dave and Rhona were planning on having a sleepover at our place that very Friday night. When I thought “cranberry bread,” I was thinking of Rhona without even knowing I was thinking of her! Cool, no?

The happy foursome were first going to go to a granola-grunge restaurant to listen to my brother and sis-in-law’s band perform and then they were going to head over to our place to crash. After all those years of my parents hosting my friends and shindigs, the tables were turning. My parents were bringing their friends and pillows to my place. I felt so….grown up.

But then they didn’t. Mom got sick, just a little fever, but yucky enough want to skip out on loud music and strange beds (or sofas). 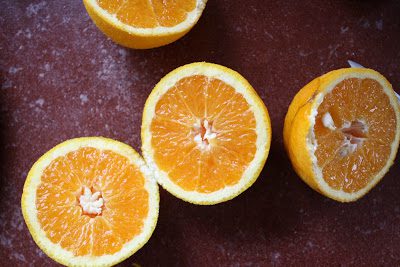 So, with a suddenly free weekend in front of us, we quick made other plans: Mr. Handsome headed up to PA with the girls to help his brother-in-law install a kitchen that they (a family of seven) had been without for 73 days. The Baby Nickel was already in WV nursing his sick grandmommy, and I quick made arrangements for Yo-Yo to go stay at a friend’s. As for me? I went shopping for clothes (saved a hundred, spent eighty), saw a movie with a friend, and then slept on said friend’s sofa because I was too chicken to go home in the dark of midnight. True, it was pitch black when I drove home at five in the morning, but pitch black at midnight and pitch black at five are two very different things. (Try saying “pitch black” three times fast.)

The movie we saw? Eat Pray Love, and the only good thing I have to say is, thank goodness I only spent two and a half bucks to see it. I hated it so much that when I got home I looked up reviews so I could get some validation, and boy, did I ever get some. Consider yourself warned.

Anyhow, the next morning I had peaceful alone time before collecting my boys. Late that afternoon Mr. Handsome called to say be was going to spend another night. (Even though he had declared upwards, backwards, and sideways that he’d only stay the one night, I wasn’t the surprised. It’s how the man does.) So I hung up the phone, turned to the boys and said, “How about we go out for pizza?” A sillier question there never was.

At Cici’s, I ate my pizza and stared at my boys staring at the TV, wishing all the while that I’d brought a magazine. After sufficiently dulling the senses with pixels and pizza, I suggested we head over to Barnes and Noble. We set up shop in the children’s section. Yo-Yo grabbed a much-loved book and was promptly lost to the world, The Baby Nickel lolled on the floor and played leap frog games, and I researched, read, and sipped my decaf caramel macchiato with whip, making forays to other sections as needed and marveling all the while that I was in a bookstore with my babies and I was relaxed. Kids really do grow up!

The next morning the three of us headed to church. I was all excited to listen to a whole entire service without the normal circus that is our family trying to mind our manners in public, only to have a friend walk by and ask if I had a free lap. I nodded and held out my arms even before the whole question got asked and suddenly there was a downy-headed, giggling, drooling little muffin staring up at me. It felt amazingly natural and right, and my boys totally dug it. And then I had that interview followed by a phone conversation with a friend and now I’m thinking that turning our home into a safe house for babies is a perfectly viable option.

And I was supposed to be writing about cranberry bread. Though maybe you’ve forgotten that by now? 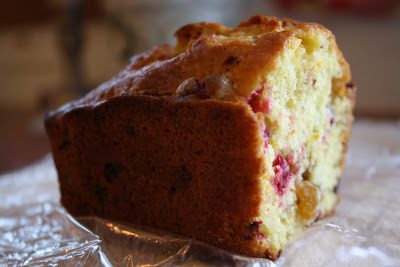 Orange-Cranberry Bread
Recipe from my mom’s friend Rhona, via my mom (and some phone wires)

I must admit, the idea of raisins in a cranberry bread seemed inherently wrong, but Mom assured me their chewy sweetness was a necessity. Of course she was right. And keep ‘em golden—aesthetics, you know.

Whisk together the oil and egg, and then whisk in the sugar and zest. Add the dry ingredients (the flour, baking powder, baking soda, and salt) and then the orange juice (alternate them, if you want to be fancy), stirring just until combined. Fold in the cranberries, nuts, and raisins.

Divide the batter between 3 small, greased loaf pans and bake at 350 for about 40 minutes, or until a toothpick inserted in the middle comes out clean. (Alternately, make one large loaf or 16 muffins. Adjust bake time accordingly.)

Cool the loaves for 10 minutes before running a knife around the edges and removing from the pans to cool the rest of the way. To freeze, wrap tightly in plastic wrap and then place the loaves in a plastic bag.