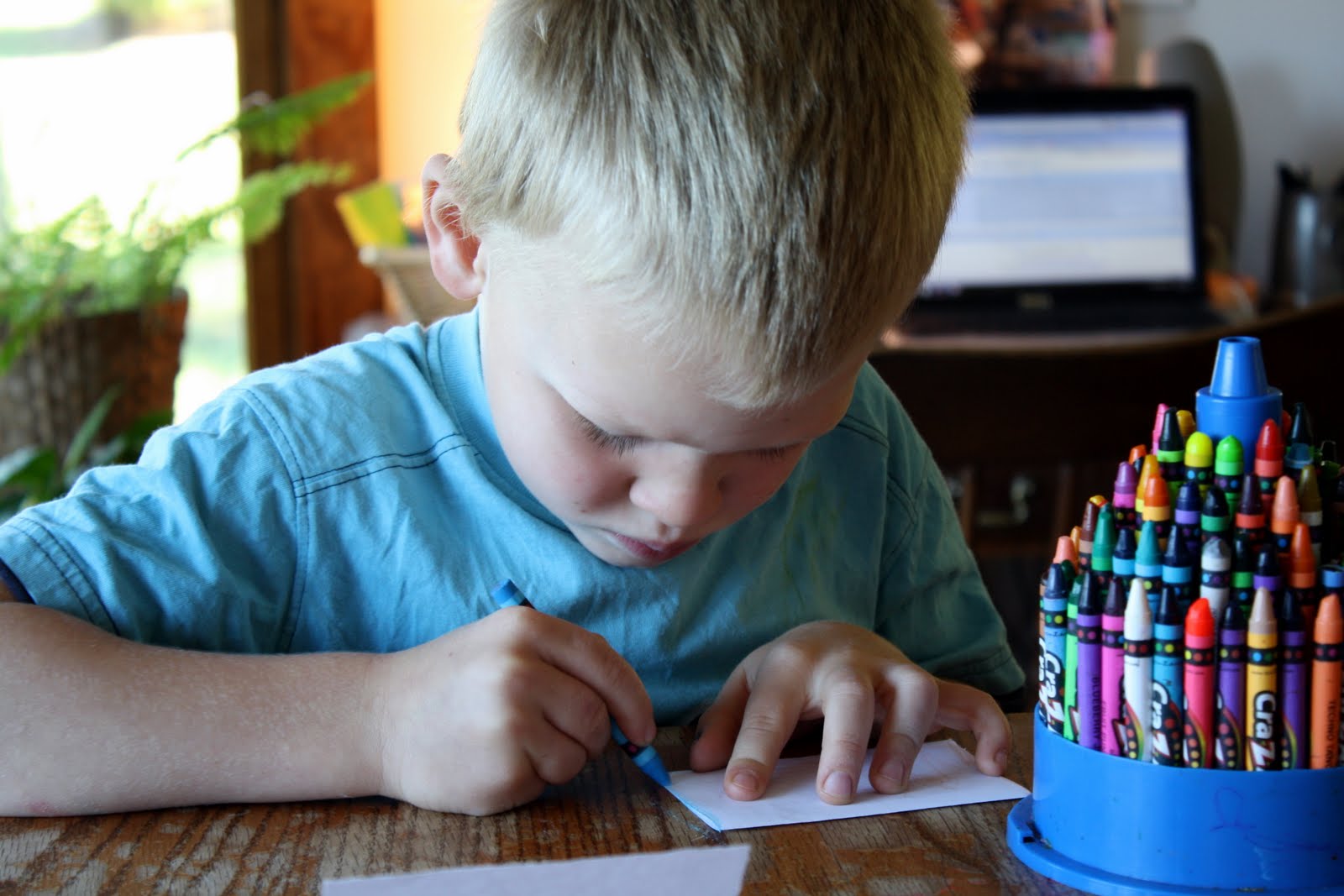 When it comes to gifts, Mr. Handsome is about impossible to shop for. He has distinct tastes, but he never lets on what they are. Me, on the other hand, I outline everything in detail, frequently mention my wish list, and even go so far as to grill the kids to make sure they understand everything.

But Saturday was Mr. Handsome’s birthday, not mine. His birthday is sandwiched between mine and Yo-Yo’s—mine 14 days before and Yo-Yo’s 14 days after. In this house, fall is otherwise known as Birthday Season.

Even though I knew I’d get nowhere, I still tried to pry some information out of the man. “What do you want for your birthday?” I asked.

“Come on, hon. You’ve got to be a little more helpful than that. Do you want time alone to work on the barn? For us to go on a family outing? A certain tool?”

“I don’t know,” he repeated. “The kids could clean the barn, I guess.” And after a reflective pause he added, “Just don’t spend too much money. We don’t have much left after buying that camera of yours.”

So it wasn’t much to go on, but still, it was something. This is what we came up with.

I sat down with each of the kids and asked them what they liked best about their papa. The three older kids then wrote the notes in their best handwriting, and all of kids decorated the bits of paper.

They worked on them a little bit each day for a week and ended up with a grand total of about 20 notes. 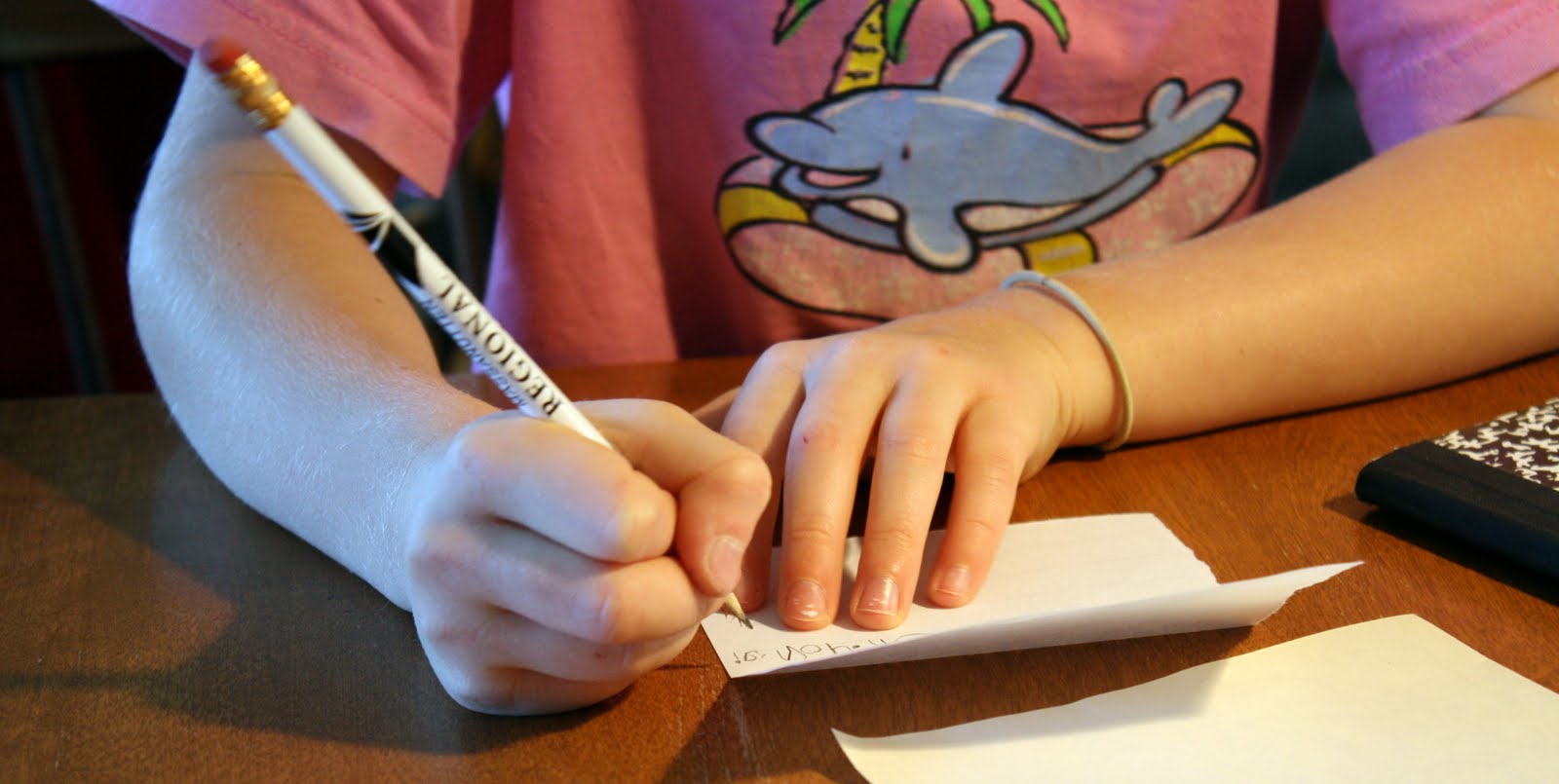 Saturday morning, the Birthday Boy had to stay in bed while the kids scurried around the house (and upstairs and out to the barn and down to the basement) taping the notes in all the places Mr. Handsome was likely to go: on the back of the toilet, on his deodorant, on the steering wheel of his truck, on the air compressor, etc. 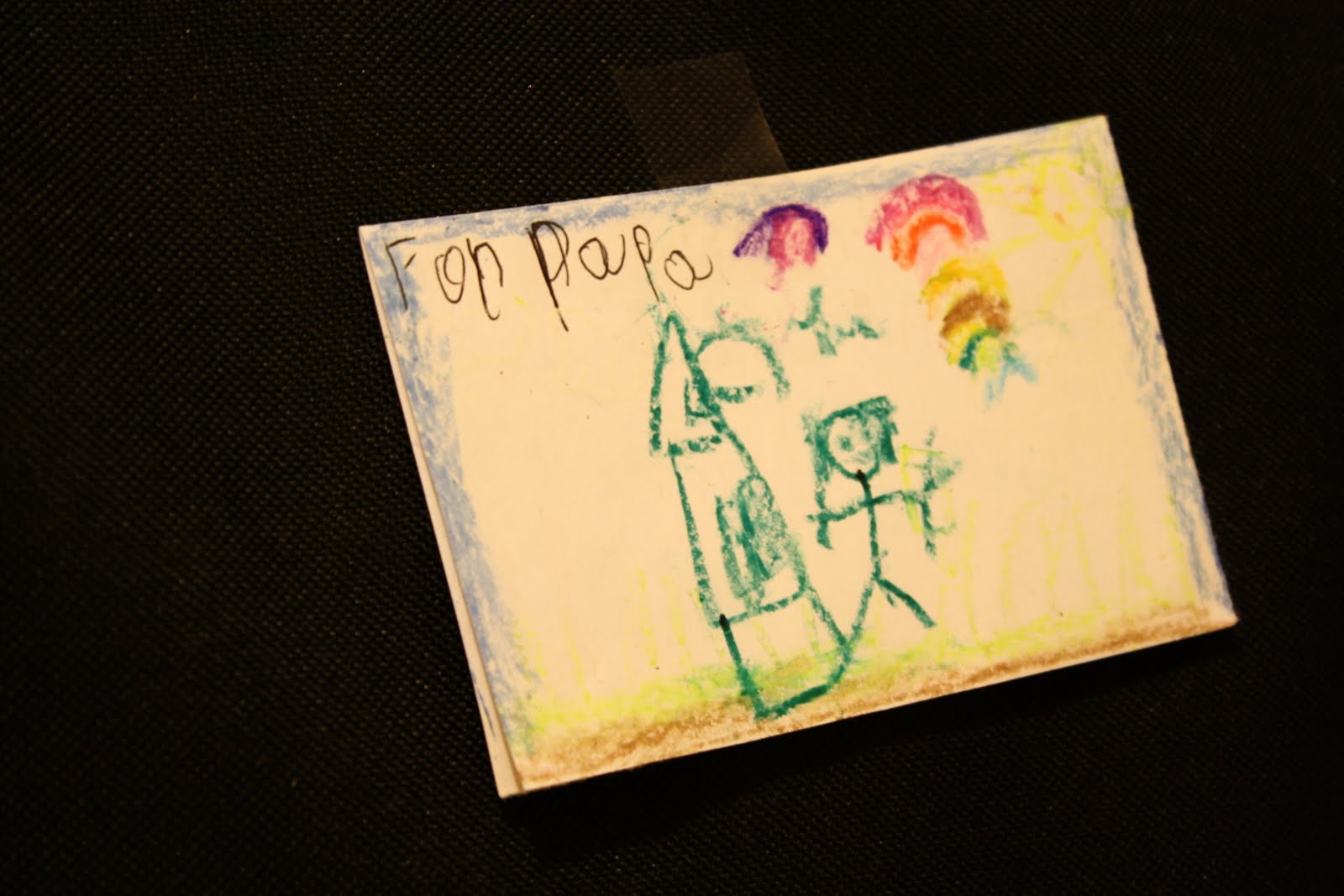 Then they waited for him at the bottom of the stairs… 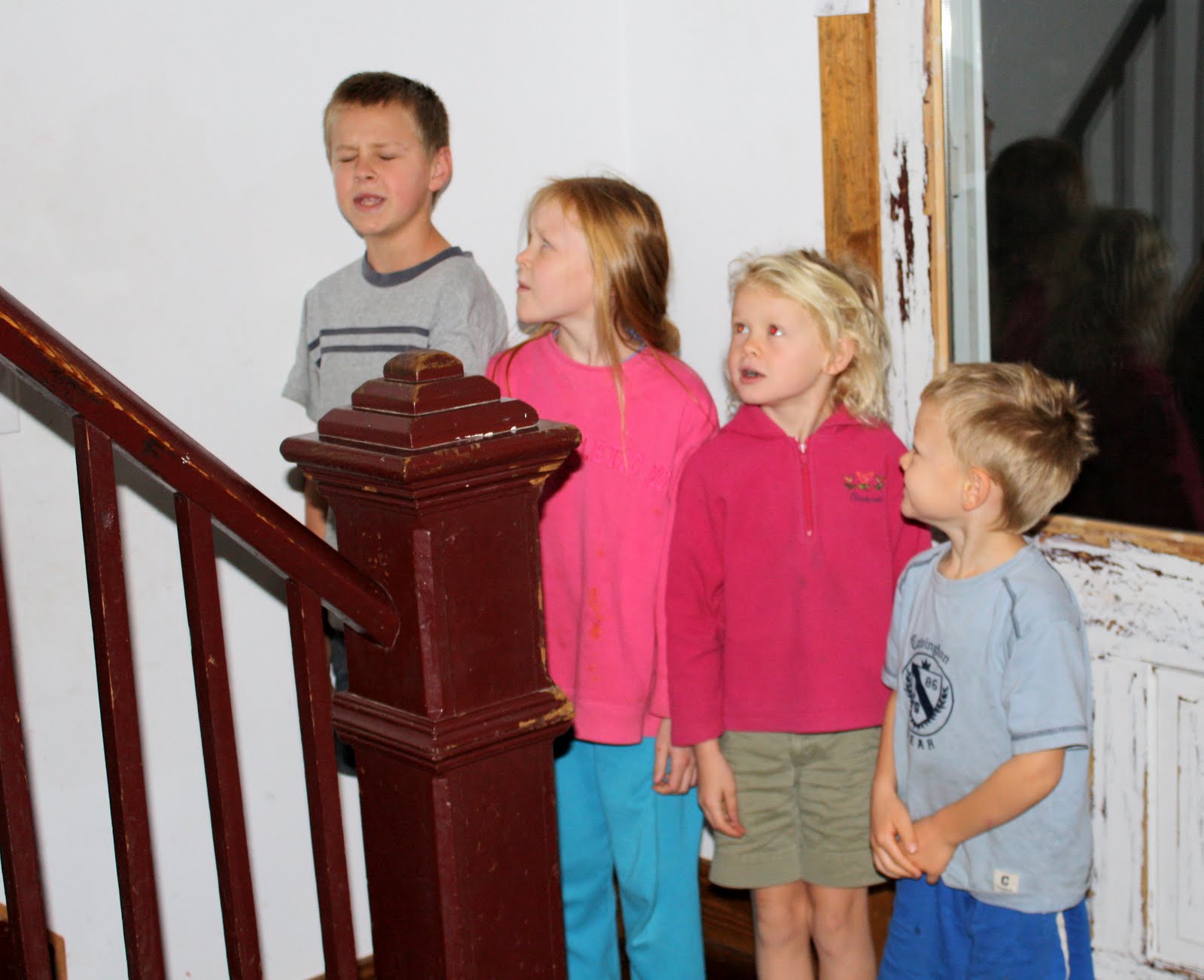 and followed him around to watch him find the notes. 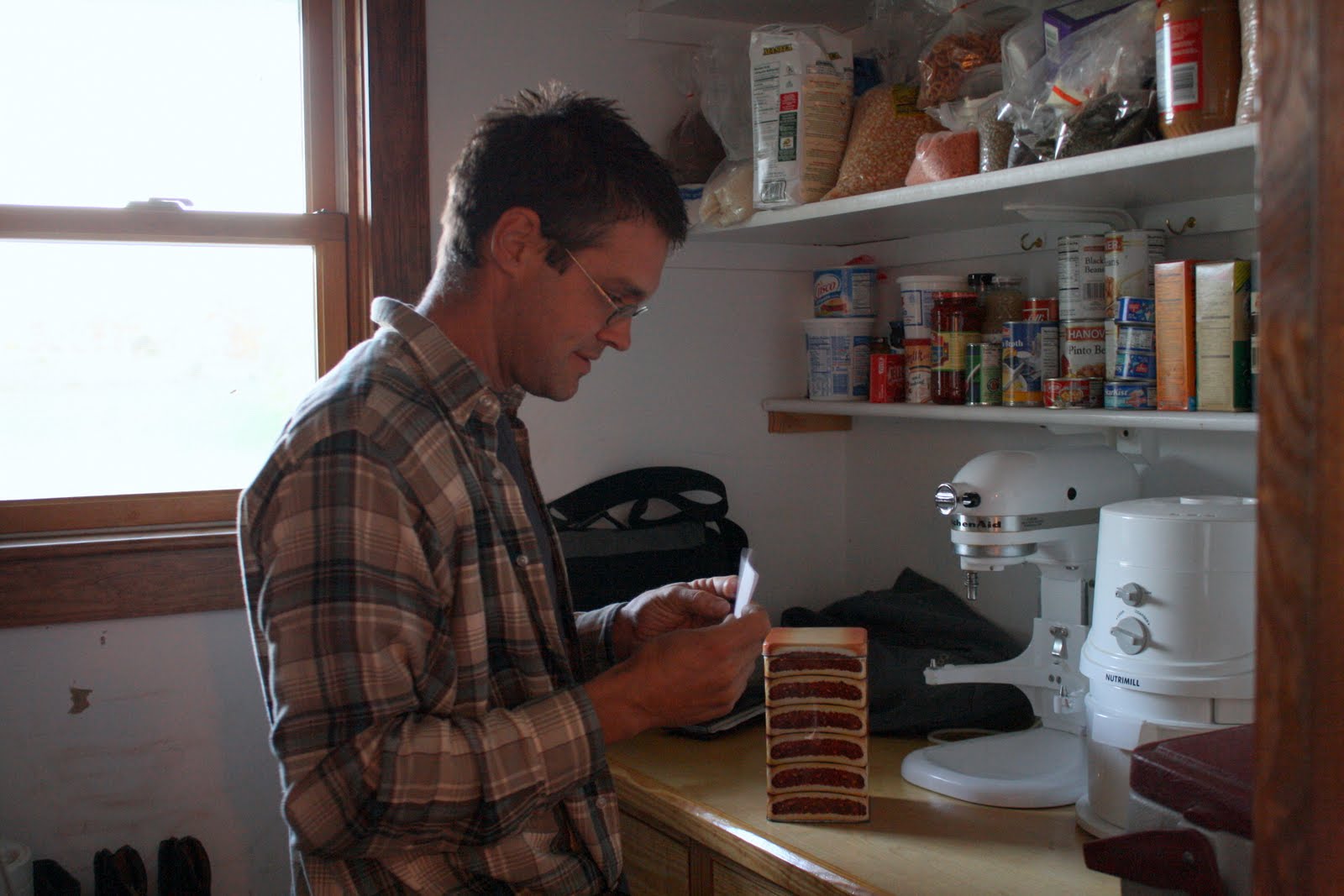 “Hey, guys,” I whispered to them. “Just act normal. Pretend you don’t know anything about the notes.”

But my kids don’t know how to act normal. The continued to employ the Cluster Method.

Mr. Handsome would read each note… 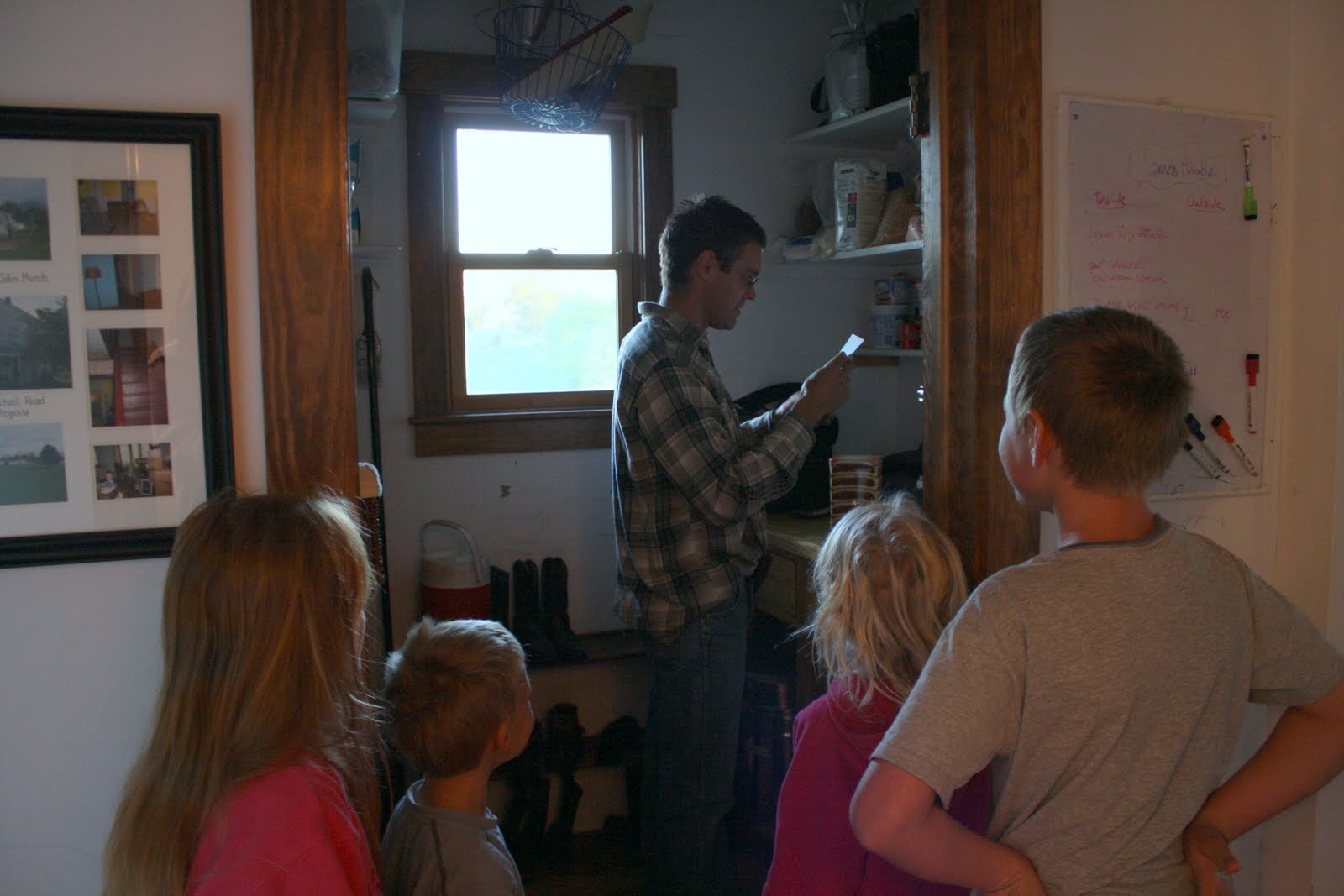 and them look at them and smile. 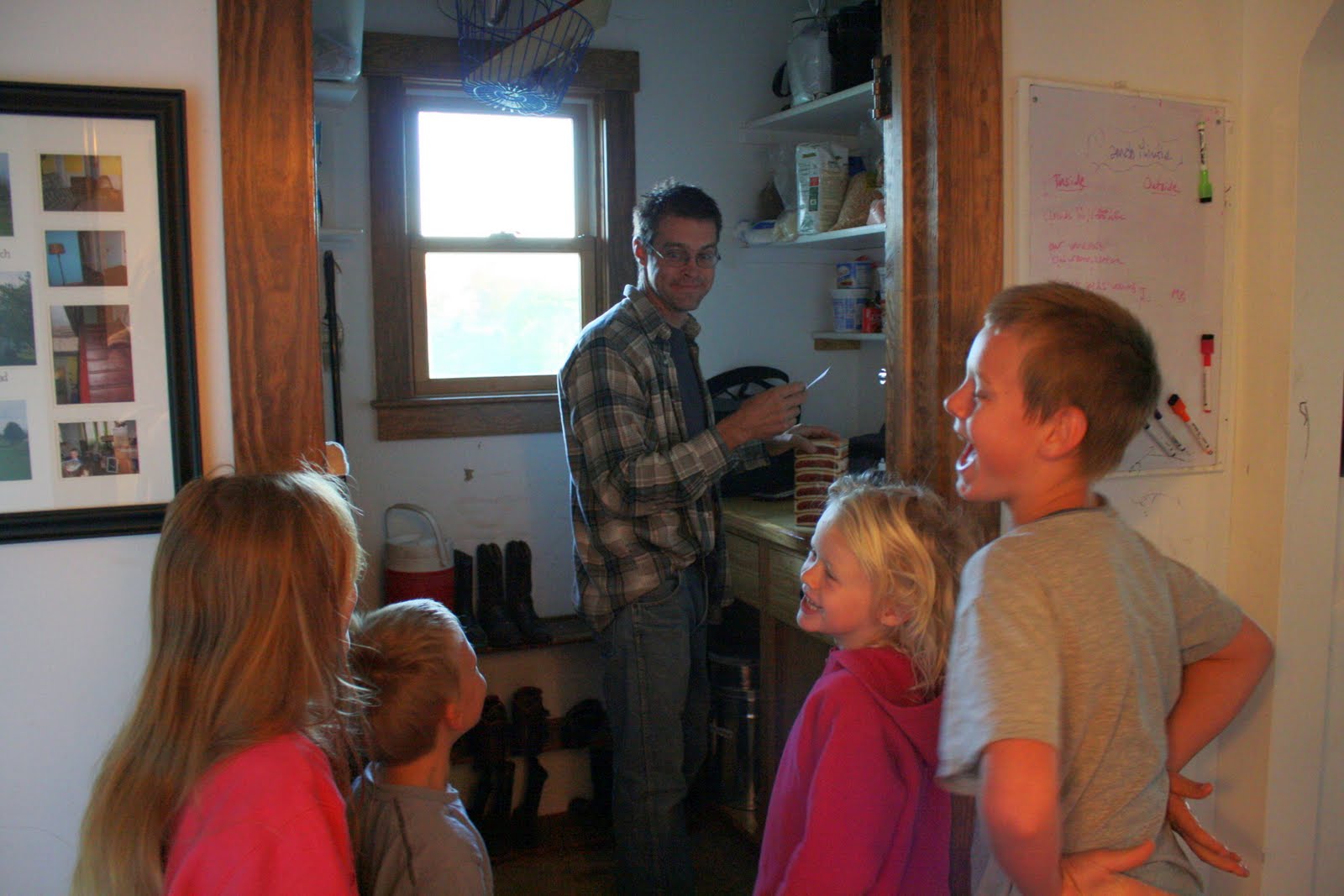 He told us later that it was his favorite thing about the whole day.

After breakfast, Mr. Handsome was ordered to the sofa. The rest of us relocated to the basement where I draped a sheet over the kids, stuck a push broom in Miss Beccaboo’s hand and smacked a ribbon on Yo-Yo’s head. They shuffle-footed into the house and stood before Mr. Handsome. And waited. 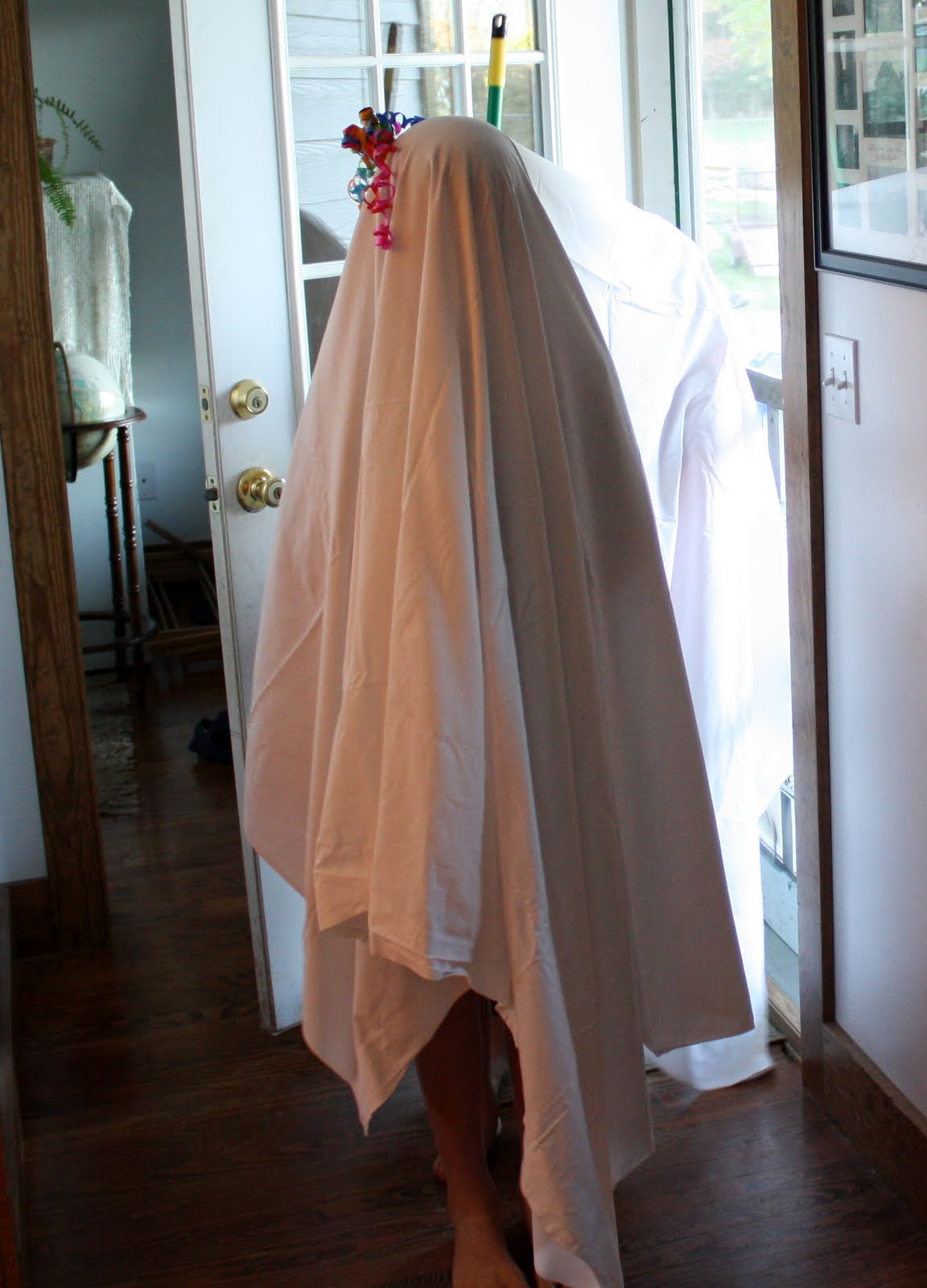 “I think you have to unwrap it,” I suggested pointedly to Mr. Handsome.

He pulled off the blanket to reveal three giggling kids and one theatrical boy who read from a scroll that sported a bunch of hieroglyphics, the gist of which was: we will clean the barn for you. 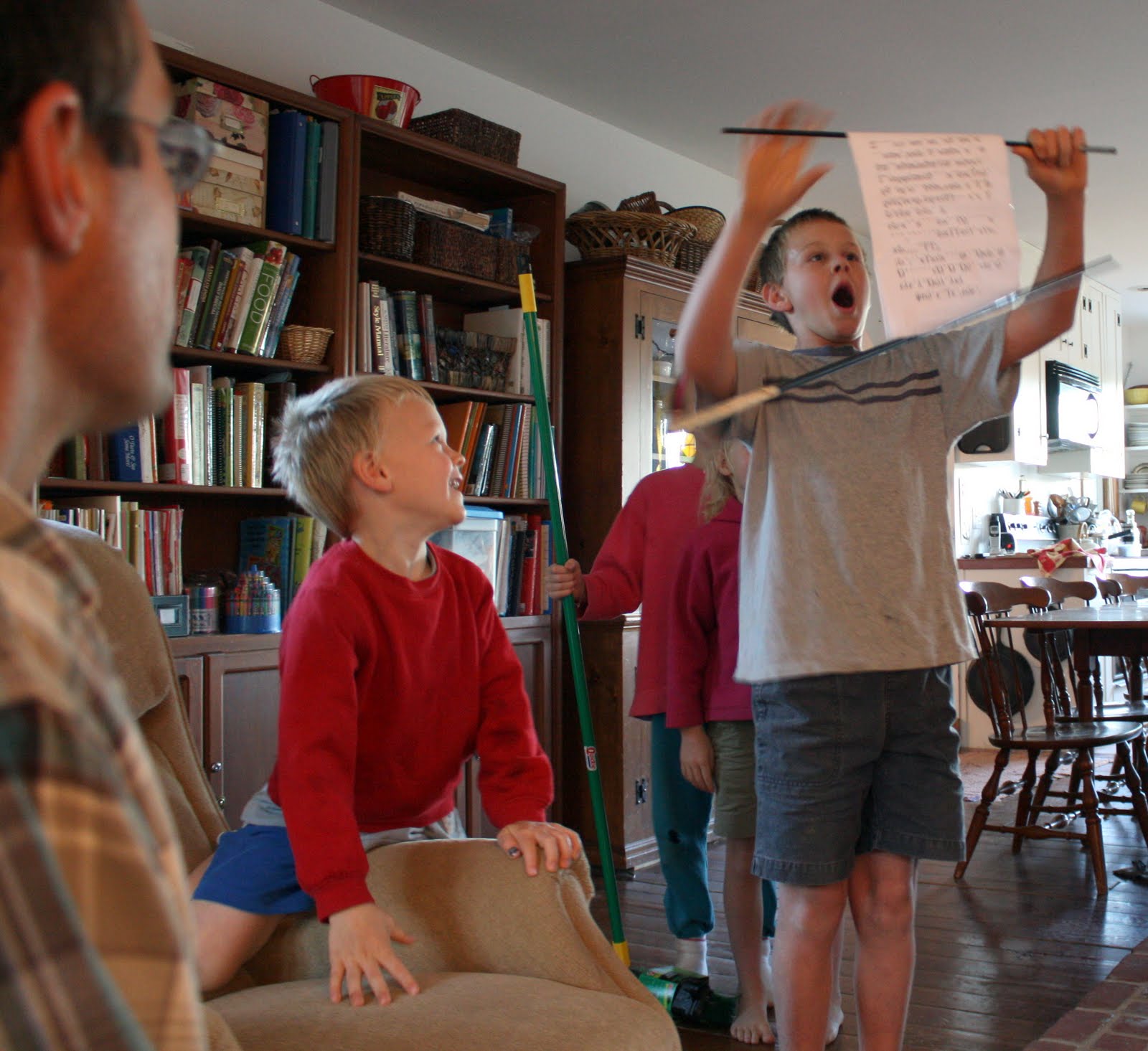 So they did … for about thirty minutes. Then they gave up.

It was a nice gesture, though. 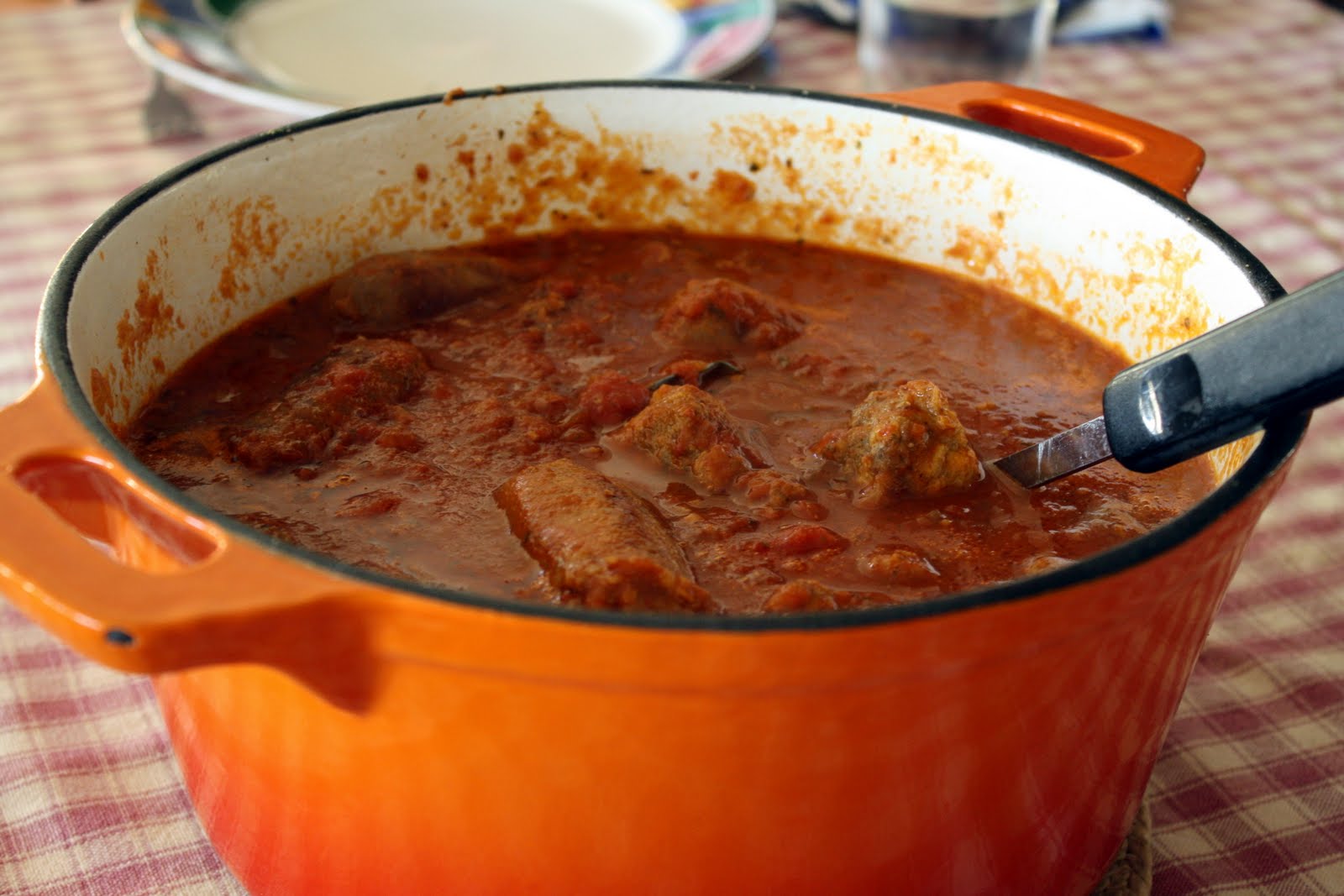 And I didn’t cook any vegetables to go with the meal. Mr. Handsome eats his vegetables like a champ (not to mention a bunch of other weird creations), but they just aren’t his thing. I counted the green-free meal as one of my gifts. 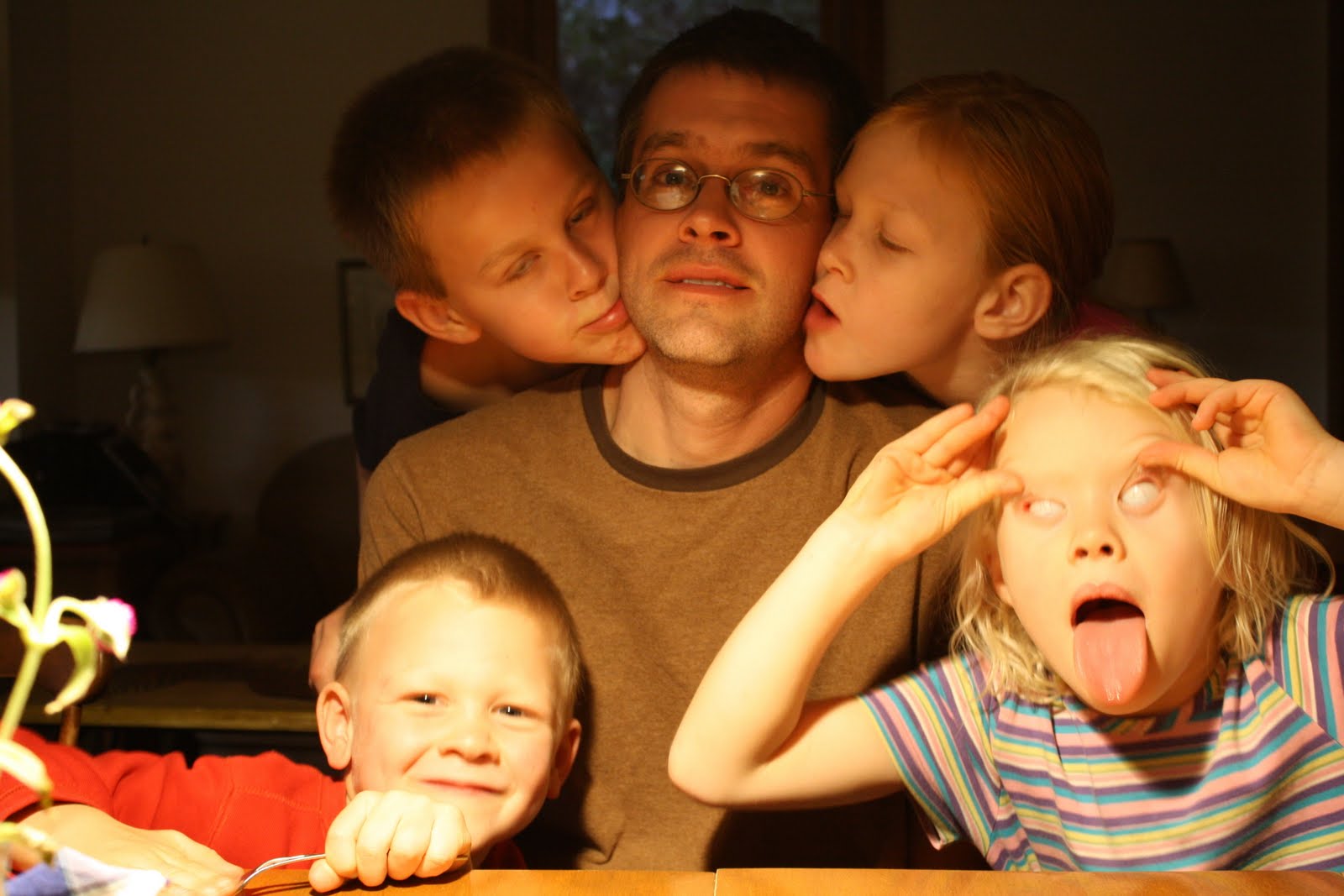 The kids gave him their gifts: “spicy” (cinnamon) gum, “spicy” (barbecue) chips, Pringles, and a gift certificate to a bagel shop. 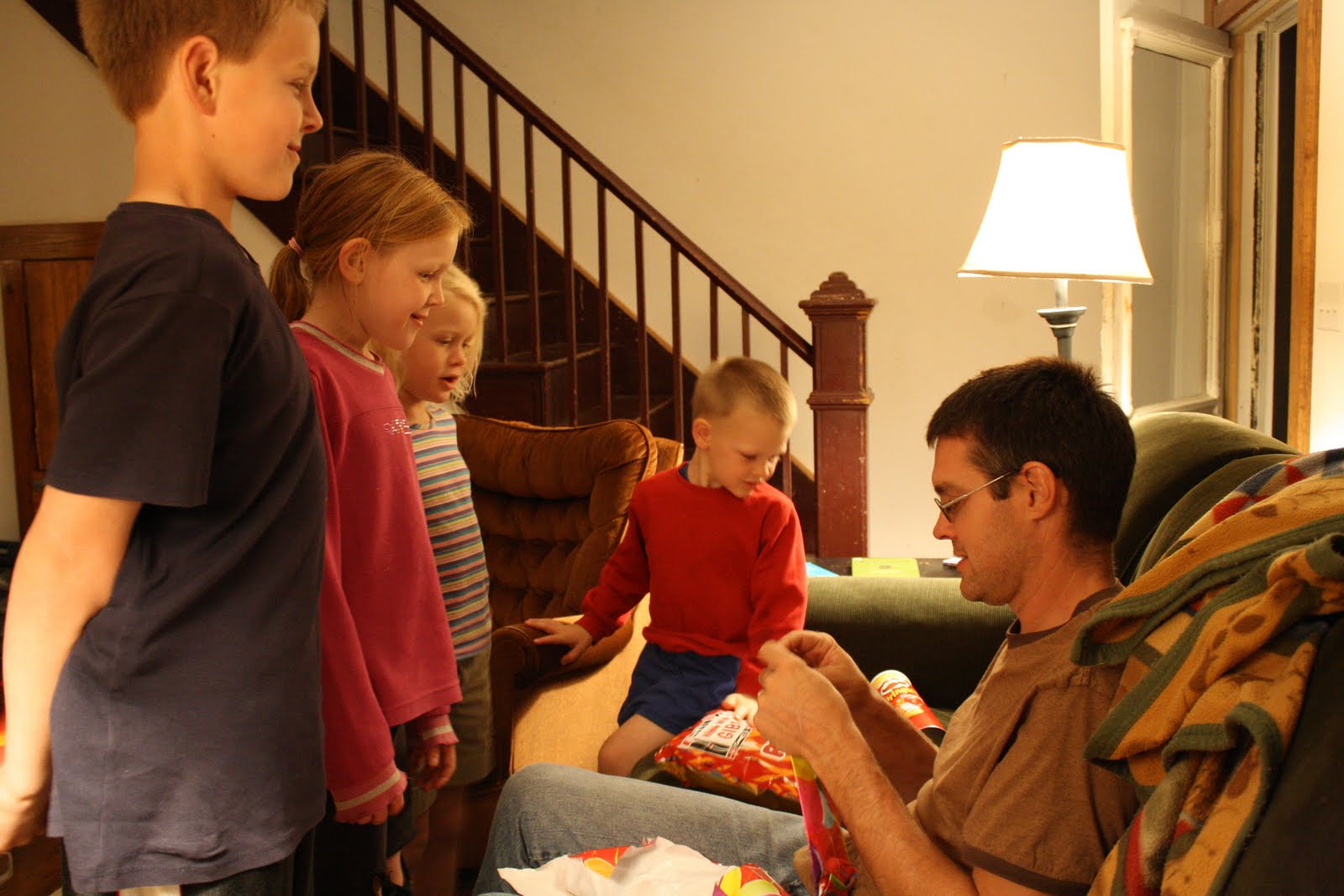 Yo-Yo played him a song on the piano. 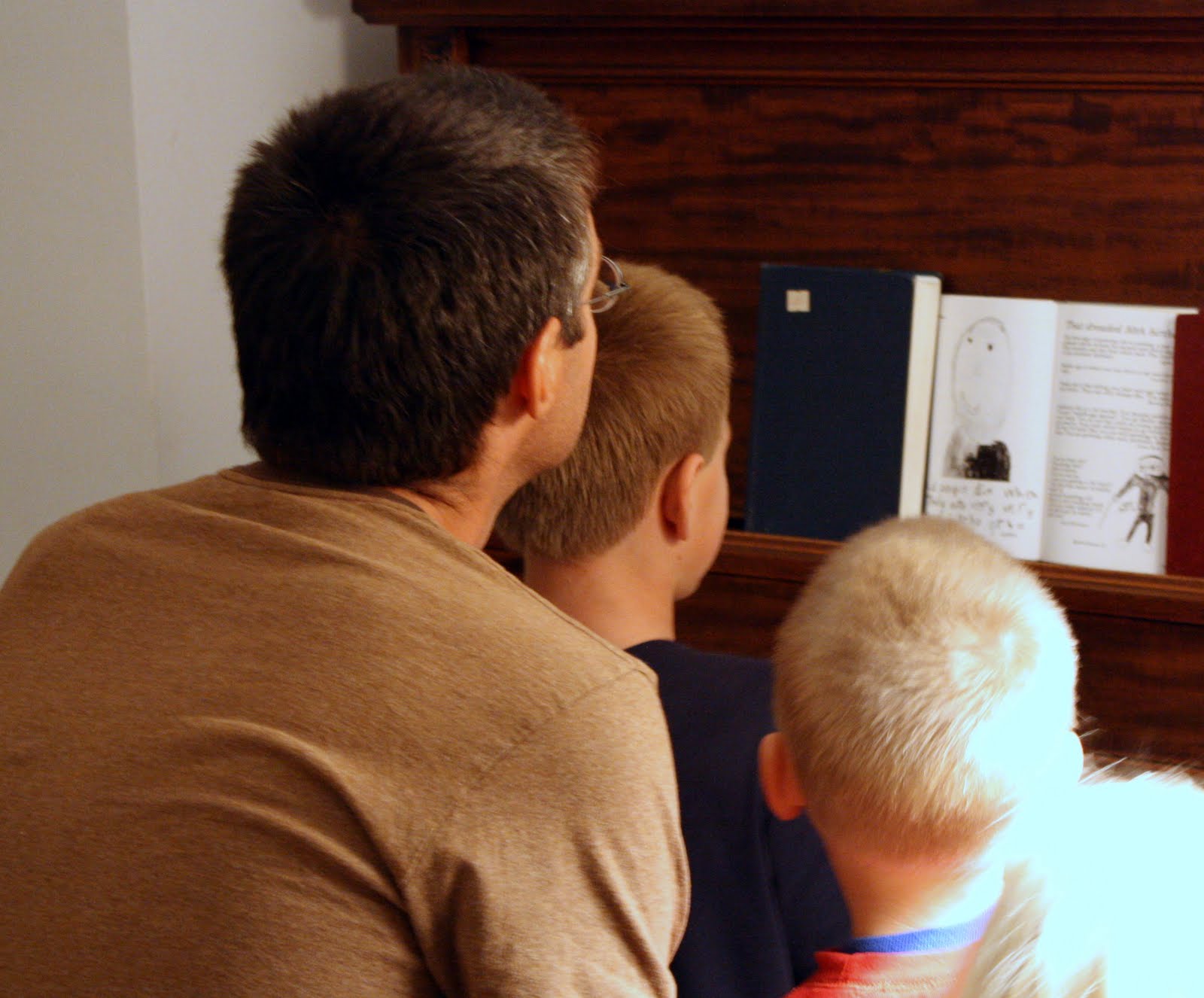 Though it wasn’t actually a song. He just played chords while reading a poem about getting older, bald heads, and middle age spread. (Ever since some people did a reading at church while piano music was playing in the background, Yo-Yo has been big into playing chords while reading scriptures or poetry.)

Then I gave Mr. Handsome my gift, an assortment of frozen food, all prepackaged and ready for his lunches. There were: 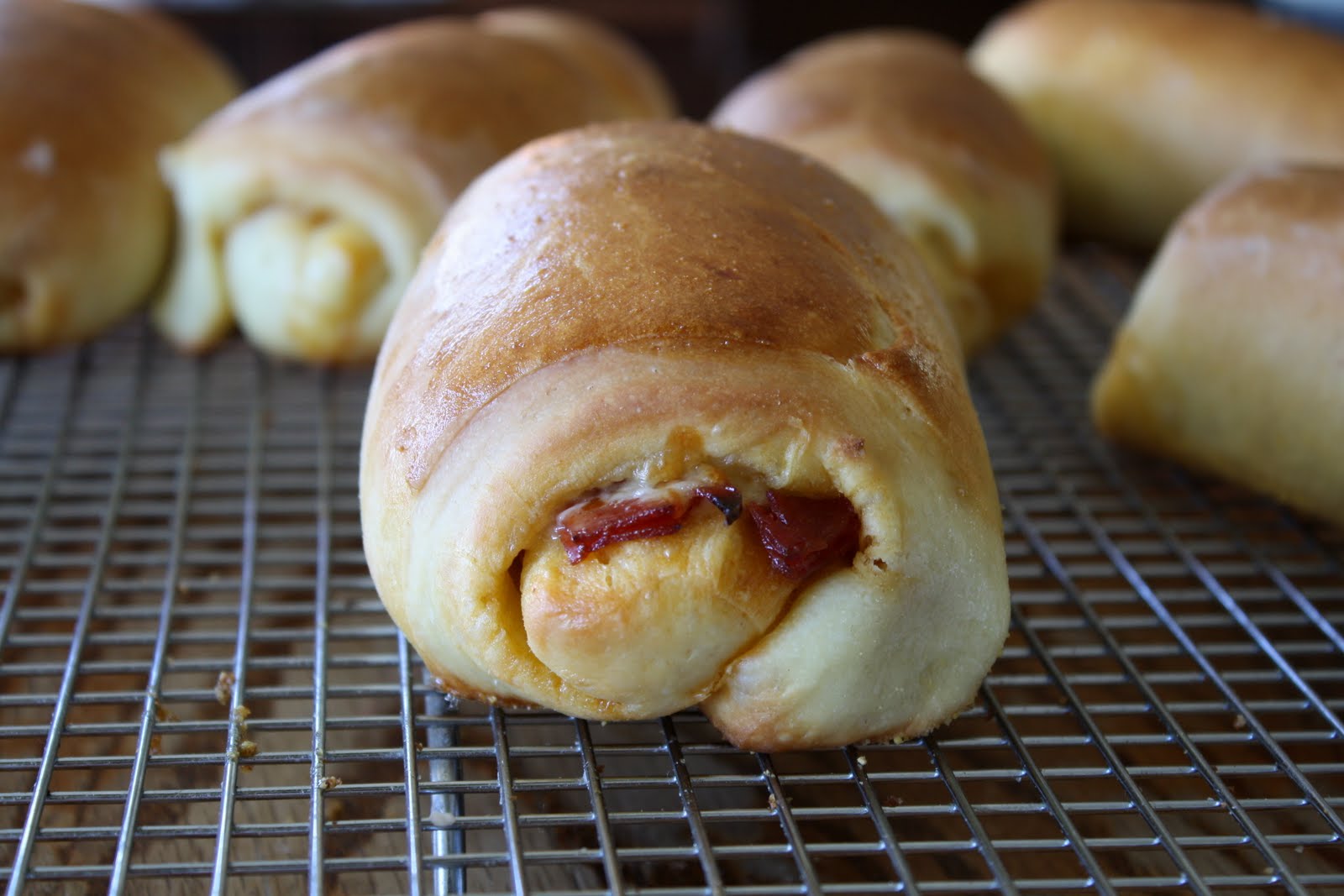 *pepperoni rolls (Recipe forthcoming, once I get it perfected. Sorry, Mr. Handsome. I gave you 16 unperfected pepperoni rolls. Plus, I forgot to take off the plastic wrapper thingamajiggy. Plus, I ate one of them so you really have only 15. Hope it’s not too much of an inconvenience.)
*containers of fruit salad
*bags of gorp
*molasses crinkles 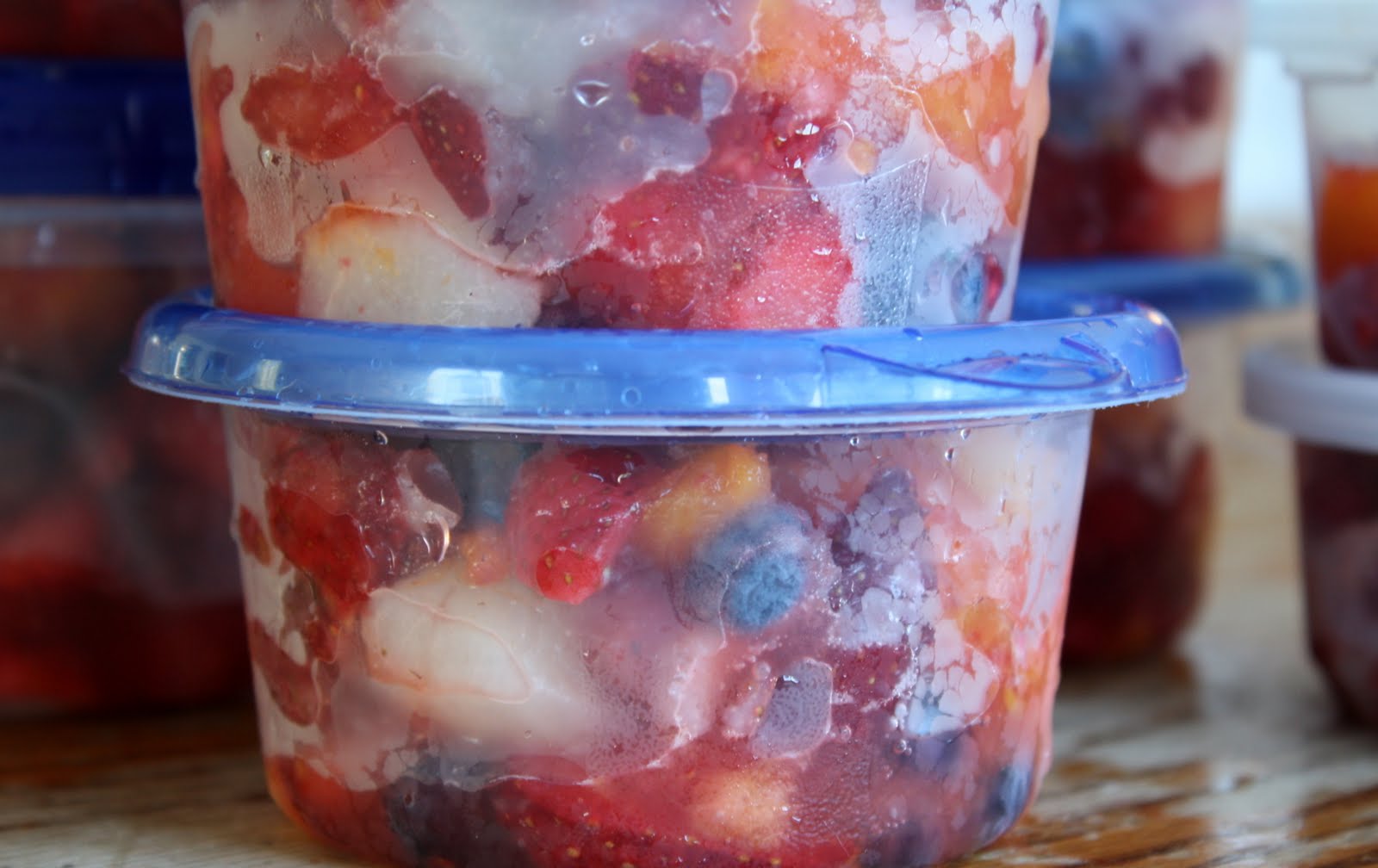 Oh yes, and two pounds of precooked bacon strips since he is such a bacon freak.

(My one, non-food gift was a year’s subscription to Newsweek.)

Then the kids jumped on their papa. 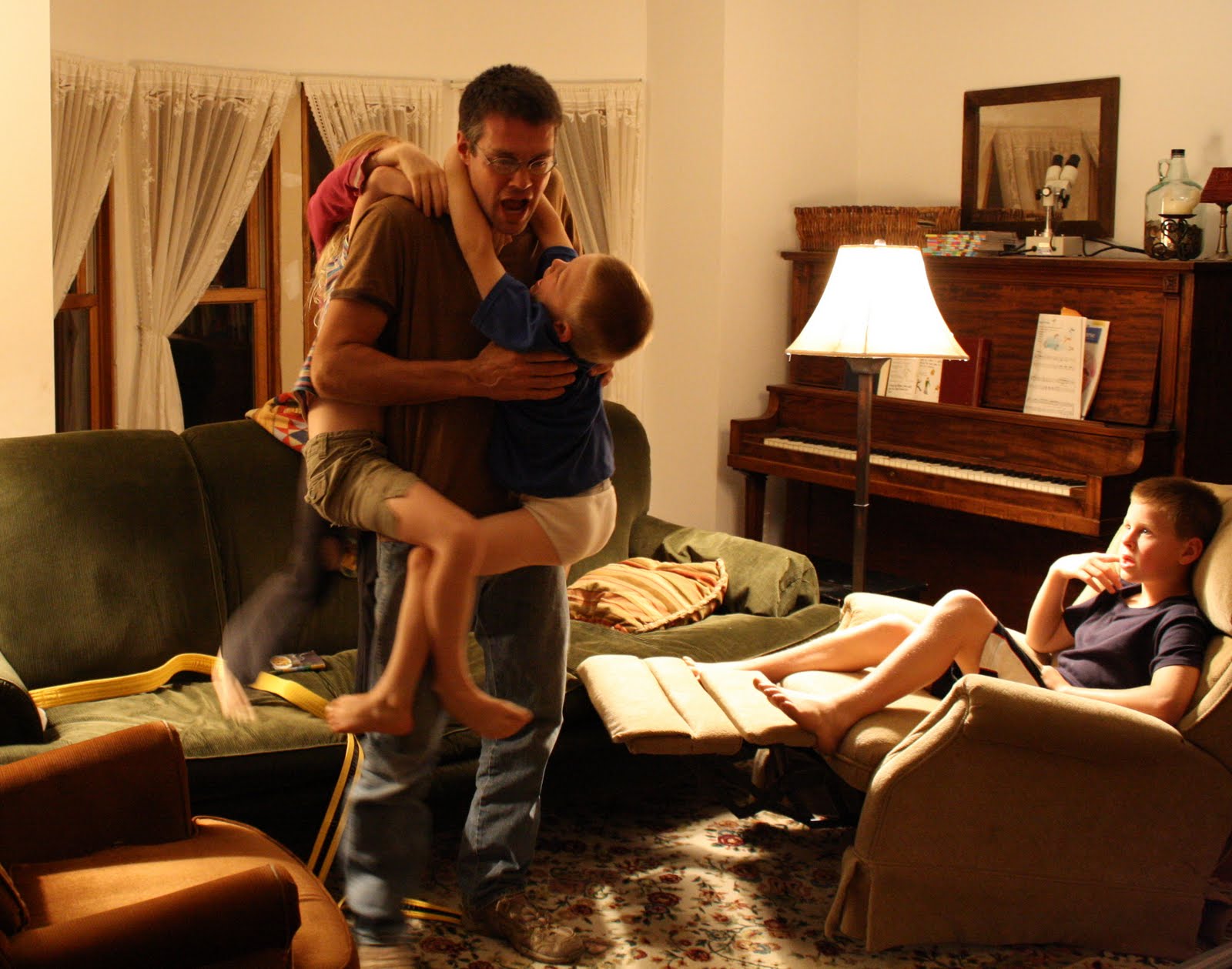 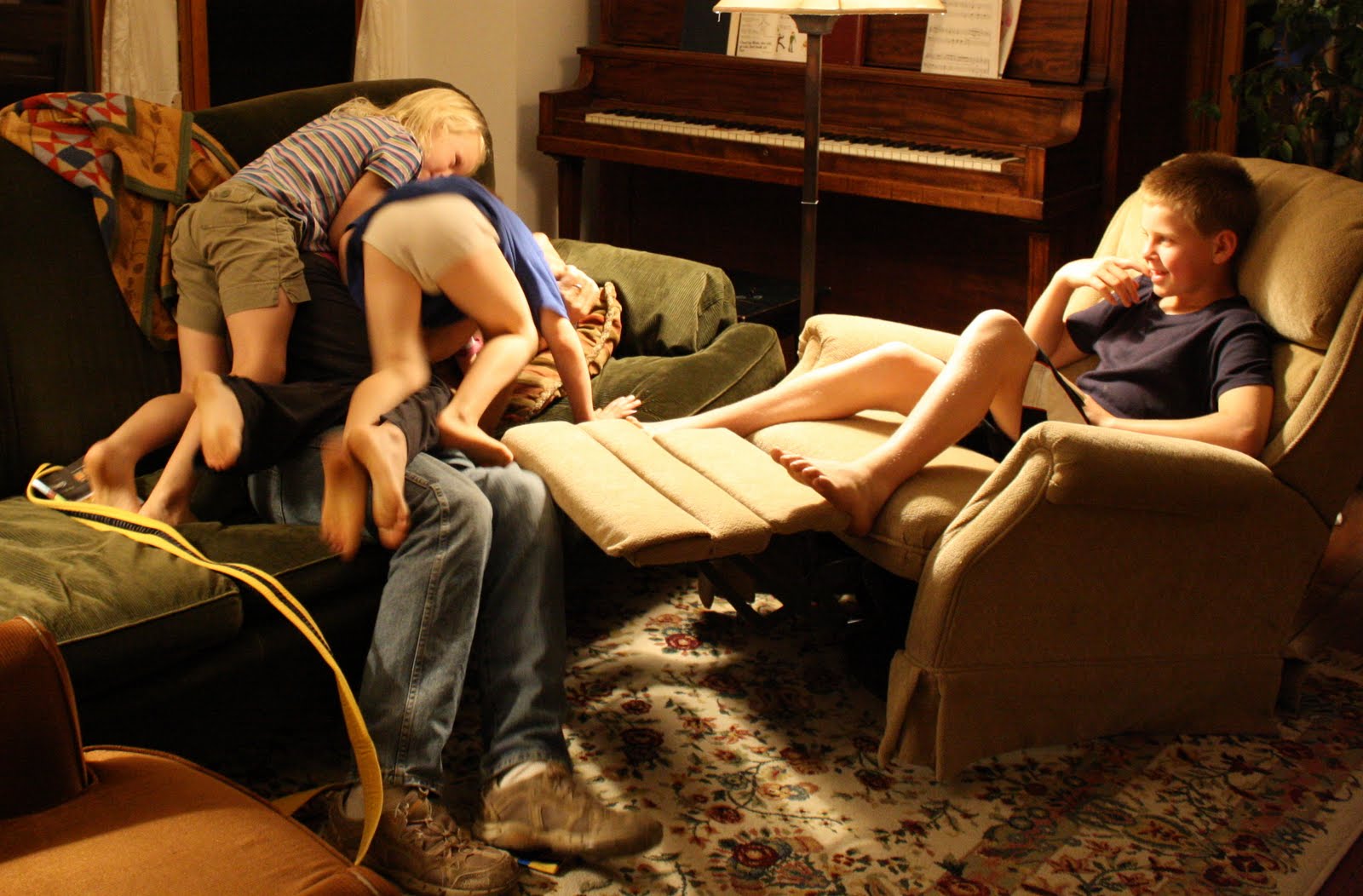 They knocked the lamp over. 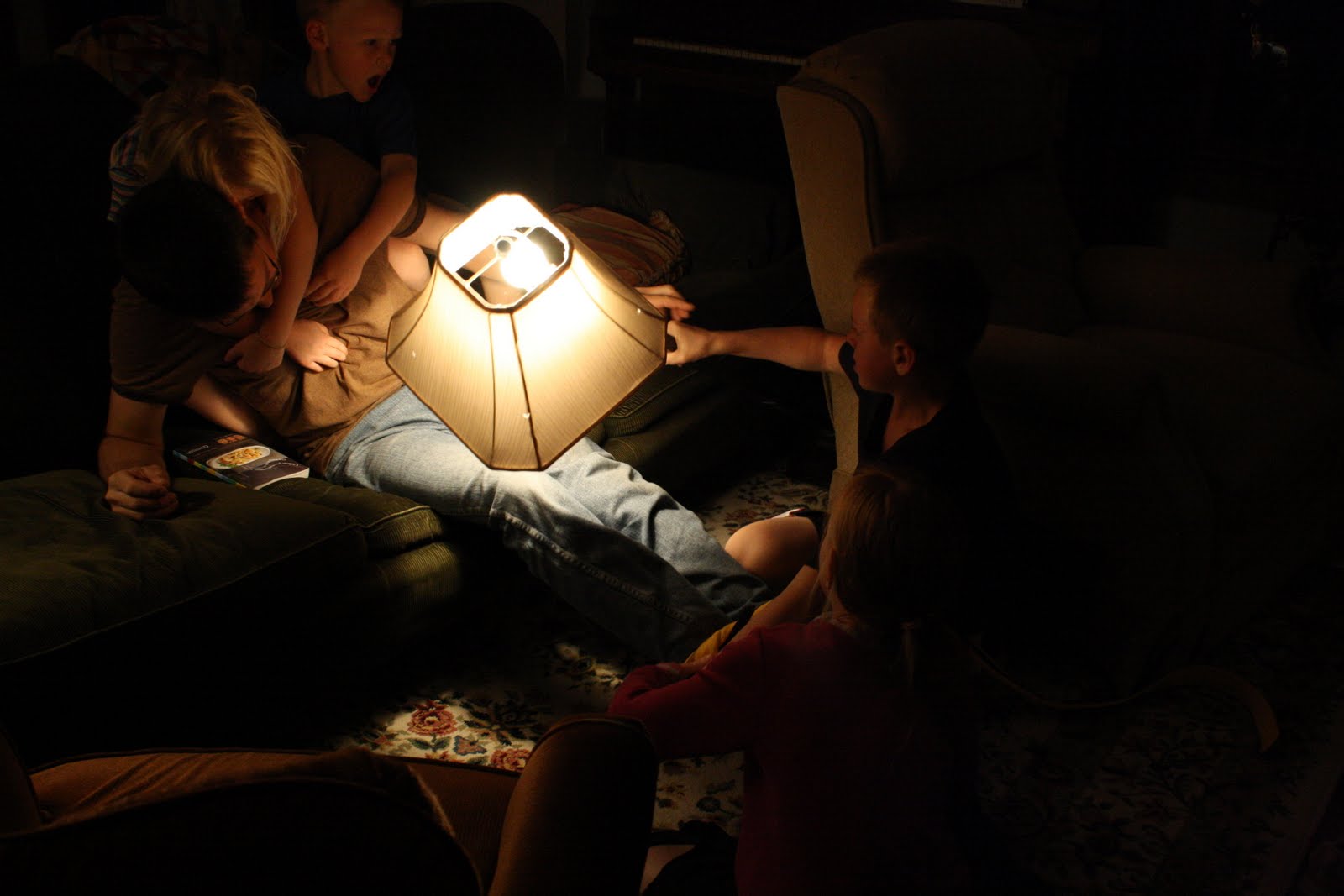 And they drug him away. 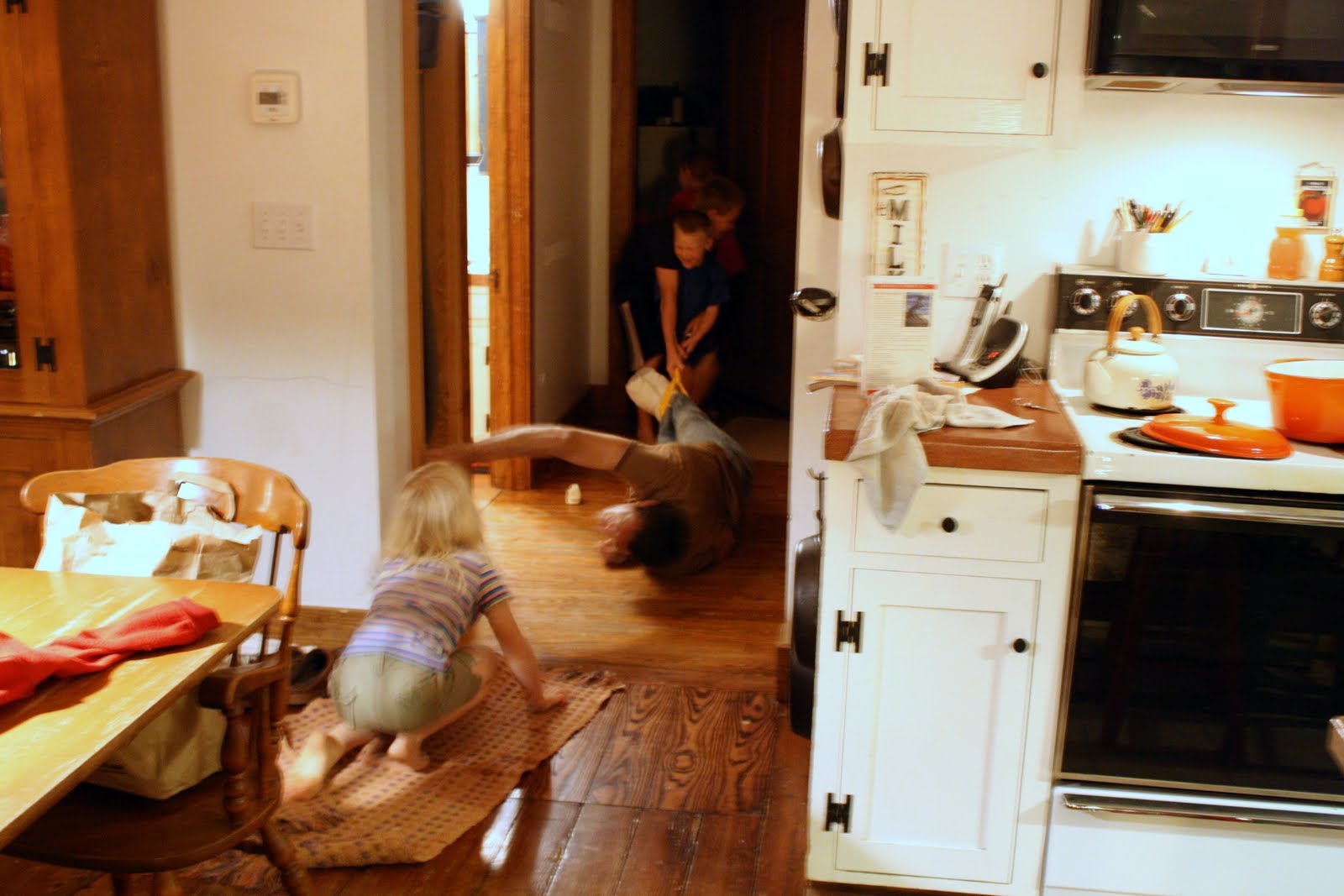 It was an unplanned attack, but it may become a tradition. You know, a show-us-your-stuff test to see how decrepit you’ve become (or not become).

However, I think he’s pretty much guaranteed to get his butt whupped from here on out, regardless of his strength. The kids are gaining on him and there’s nothing he can do about that. Especially once The Baby Nickel gets a couple years older and a couple pounds heavier. Then there is no hope for Mr. Handsome whatsoever. The Baby Nickel moves like a wrecking ball.