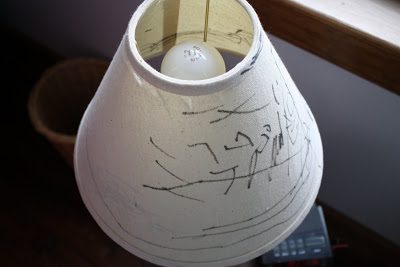 This one has been stricken with permanent marker by an errant and heavy-handed child. Other lampshades have holes poked in them. Some are bent.

I like lamps but my children seem to have a vendetta against them. Perhaps they are jealous? Perhaps they want to be the only Lights of My Life?

Fruit flies, disgusting and gross little thangs that they are, have been swarming my kitchen. I thought there was nothing to do for them besides occasionally waving a vacuum cleaner hose over their party, but I was wrong. 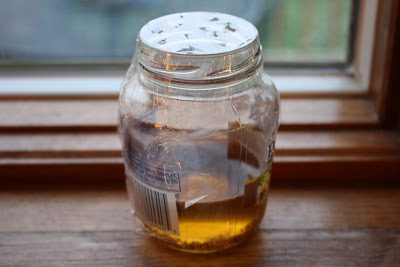 *Put a couple drops of dish soap in a jar.
*Glug in some cider vinegar.
*Cover the top of the jar with a piece of plastic wrap.
*Poke some holes in the plastic wrap with a sharp pencil.
*Over the course of the next twenty-four hours, gleefully watch as the bottom of the jar gets covered with dead fruit flies. 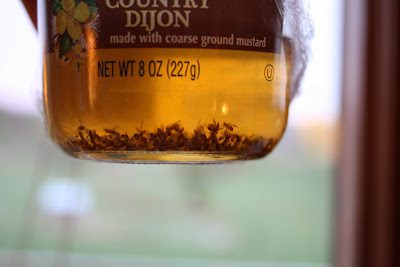 (Other partners in crime: Margo—who taught me how to become a mass slaughterer—and Lynn.)

Tale #3: I tried to poison my children and failed

My children have sticky fingers. They steal candy from my cupboards. I have tried everything: talking, heaping on mountains of old-fashioned guilt, withholding their treat at treat time, having them pay for replacement candy and then withholding it from them, etc. All this to no avail. The sticky fingers continued to reign supreme. (I have not completely eliminated candy because a couple kids are oblivious of these crimes and adore their little treats. Plus, and more to the point, I like my little treats.)

One night after opening my cupboards and finding the twist tied-shut bag of marshmallows untwist tied for the second time that week, I decided I’d had enough. Desperate times called for desperate measures. It was time to break out the poison.

I scanned my spice shelves. Cayenne powder? Too visible. Baking soda? Not intense enough. Salt? Too bland. Then my eyes lighted on the little bottle of Tabasco sauce. Yes!

I emptied the bag of marshmallows of all but four (no, I did not eat them—I ziplocked them away in a higher, secreter spot). Those four marshmallows I set on the table, cackled wickedly, and commenced to pierce the marshmallows with a knife and glug in my evil potion. To help obscure the rather tell-tale rust-colored smudge on the bottom of each marshmallow, I rolled them in powdered sugar. Then I stuck the bag back in the cupboard like it was, still untwist tied, readily available for some sticky wandering fingers.

That was several weeks ago. Since then, no marshmallows have gone missing.

I am crushed. I so wanted to catch the sweet-toothed thieves red-handed and hot-lipped, tears of remorse streaming down their faces.

I went to a church meeting the other evening, and on my way out the door, I stuffed Mr. Handsome’s cell phone in my purse. I didn’t think of it again until one of our church elders was intoning the closing prayer and the phone started brrringing.

My chair was wedged in a corner. I couldn’t flee. I snatched up my purse and started digging.

Elder son’s birthday presents did not arrive in time. This means that the poor child got clothes, deodorant, and Legos.

I fail my children in so many ways but birthdays do not need to be one of them. I have control over birthdays. I like birthdays.

And yet the most basic thing, the presents, I bombed. 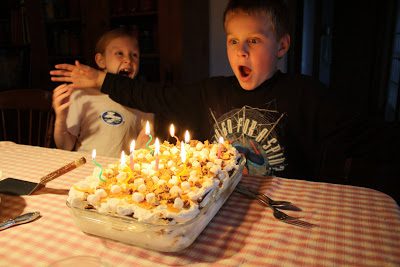 He soldiered on most magnificently, despite his parents’ shortcomings. He knew I felt bad. He acted tough.

I knew he knew I felt bad and was acting tough for my sake. I felt worse.

This afternoon the UPS truck is scheduled to deliver me from my pile of wretchedness. It’ll be nice to finally lift my head and stare at something besides my toes.

This is not a story of terror and woe (unless you are lactose intolerant or have horrible memories of the 70s or once ate the whole pot of fondue and now just the mention of the word makes your insides seize up), but I wanted to tell you about it and since I was making a list, I decided that consistency would win out over logic this once. (Not that logic hasn’t ever lost out before..)

In this house, fondue equals Classy Kid Meal. It involves all the elements of excitement and yum: fire, sharp poke-y things, plus weinies and cheese, all in the comfort of your home, arranged atop a red-checked tablecloth.

Many fondues call for white wine and fancy cheeses. I love them all, but not everyone in my family does, so for our family parties I stick to a simple, alcohol-free cheddar cheese sauce.

When it comes to fondue, I’m all about pleasing the masses. 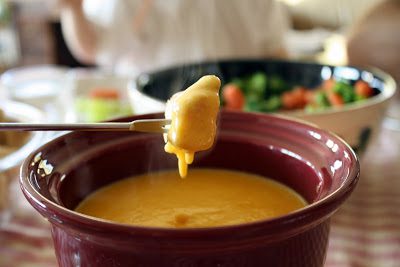 We only have one fondue pot. This makes for a complicated mealtime dance, what with all the lunging and plunging. Therefore, some people get to dip out of the pot and others get little ramekins of sauce to sit on their plates. This way no one gets stabbed. (If that happened, then this would be a tale of terror and woe.)

Put the milk and onion in a saucepan and scald. Toss the grated cheese with the flour. Add the cheese and heat through, whisking steadily, till smooth (do not boil). Add the Worcestershire sauce, cayenne pepper, and salt, and taste to correct seasonings. Pour into a fondue pot or little ramekins and serve with dip-able munchies.

Dip-able munchies:
*cubes of bread—cut thick slabs of hearty bread into cubes, lay on a baking sheet, and bake in a 350 degree oven for 10-15 minutes till lightly toasted, stirring every few minutes
*steamed broccoli and carrots—steam the carrots till slightly tender; add the broccoli and continue steaming till both are tender
*apple slices
*sausages, little smokies, hot dogs—heat through and chop into bite-sized pieces
*other ideas—mushrooms, boiled potatoes, shrimp, asparagus, etc.
*to accompany—olives, grapes, other acidic munchies to cut the heavy cheese

Fondue leftovers are wonderful. Chop up the veggies and meat and add them to a thinned down cheese sauce. Toast the bread cubes the rest of the way to crouton-dom, and bingo—you’ve created fondue soup!

P.S. I thought up the theme for this post while at a funeral. The grave diggers looked like they were straight out of Mel Gibson’s Hamlet.

Updated on October 31, 2010: That fondue soup is a little tricky. Sometimes the cheese doesn’t want to be thinned down and goes all stringy. So it might be best give up on the idea of thinning and simply chop up the chilled fondue into little bits before adding it to the soup.