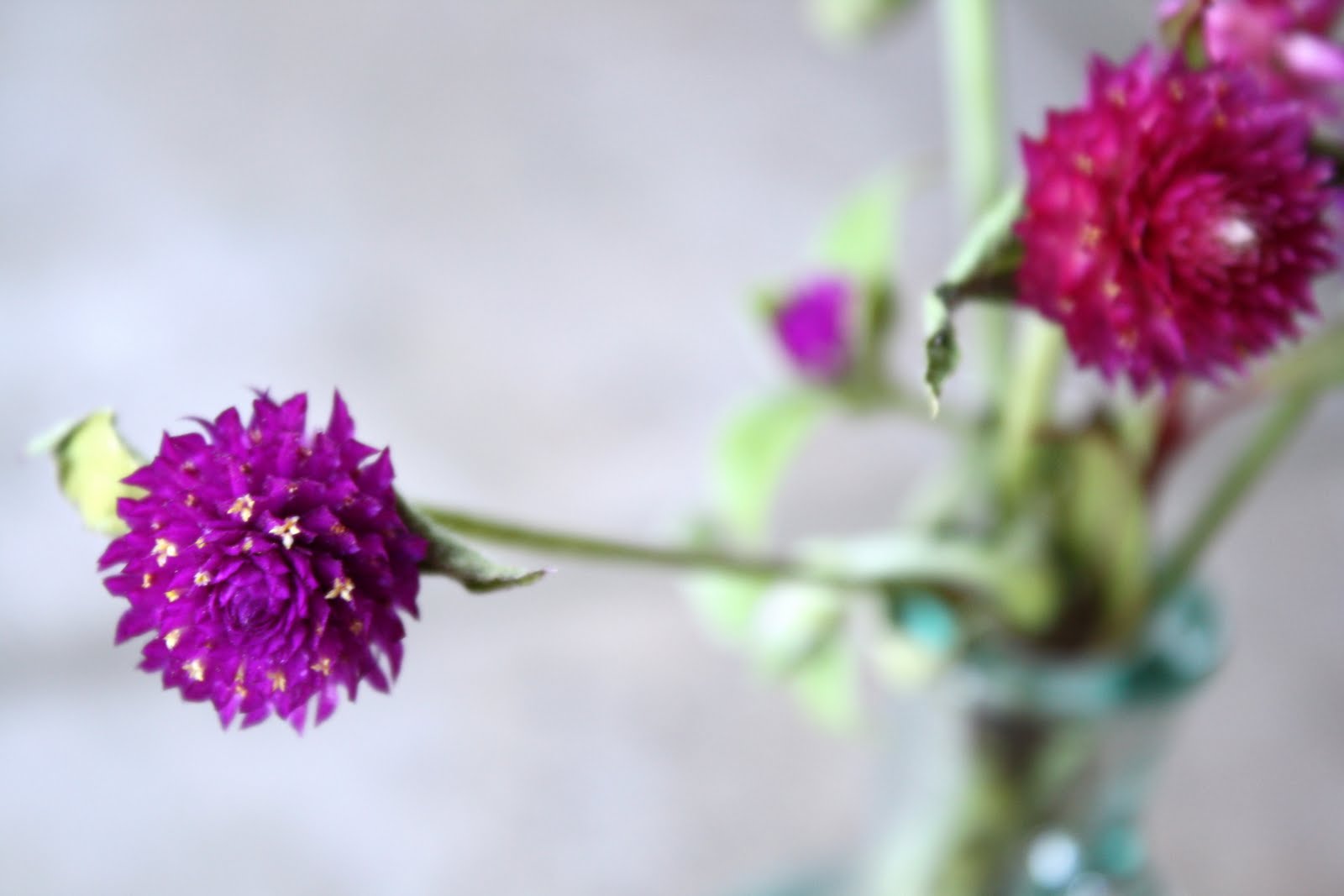 I can’t get anything done for this black box that’s glued to my eyeball. This new toy of mine gets more face time than my children and my honey combined. I obsessively adjust its sexy dials and push its cute buttons (in the most gentle and loving way possible). I caress it. I sigh blissfully, beaming joy into the cosmos, and I think many, many happy, sappy thoughts.

I snap shots fast. I snap them slow. The schlick of the shutter gives me a head rush. It’s addictive. 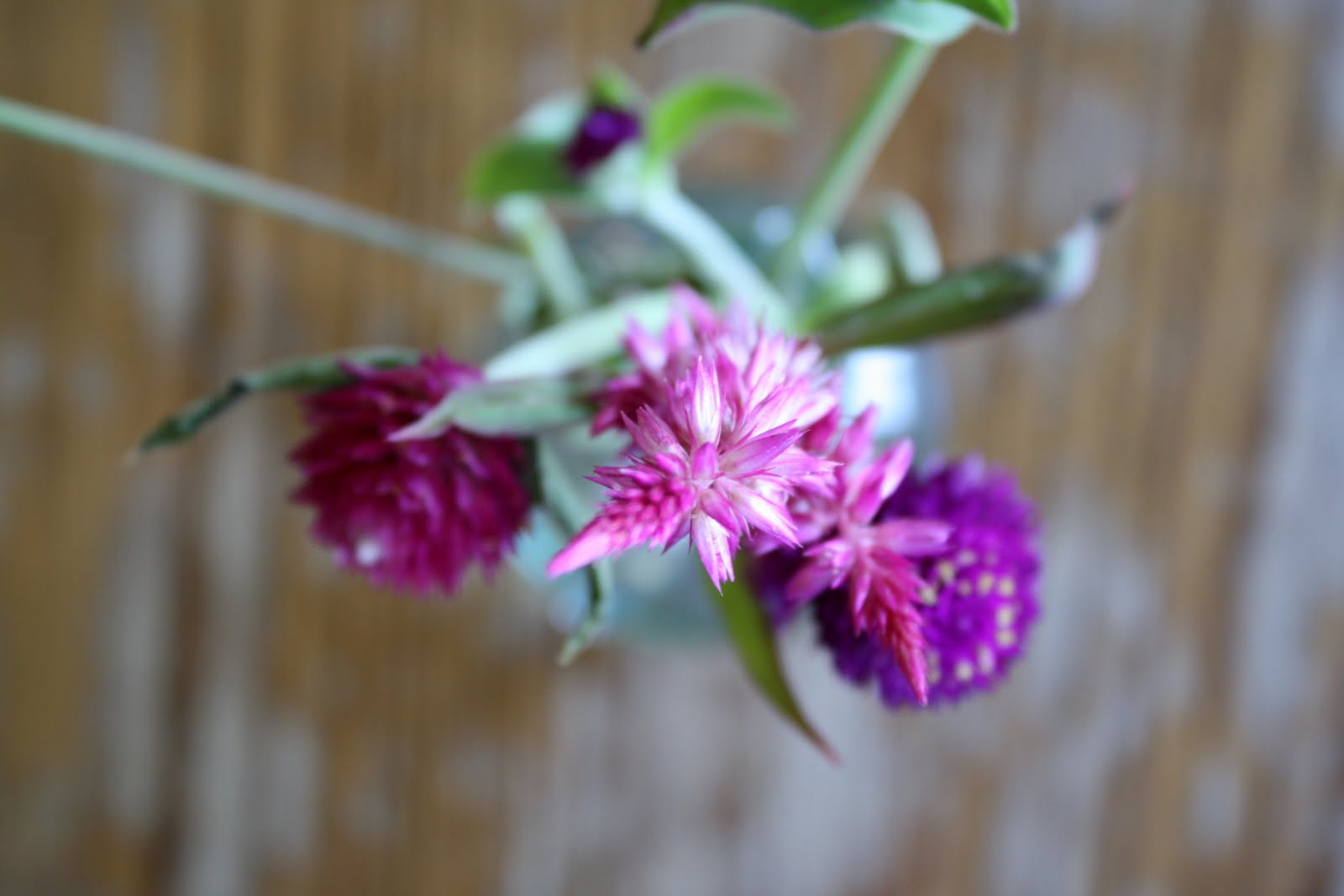 Some of you mentioned that my new baby makes you feel a tad bit jealous. 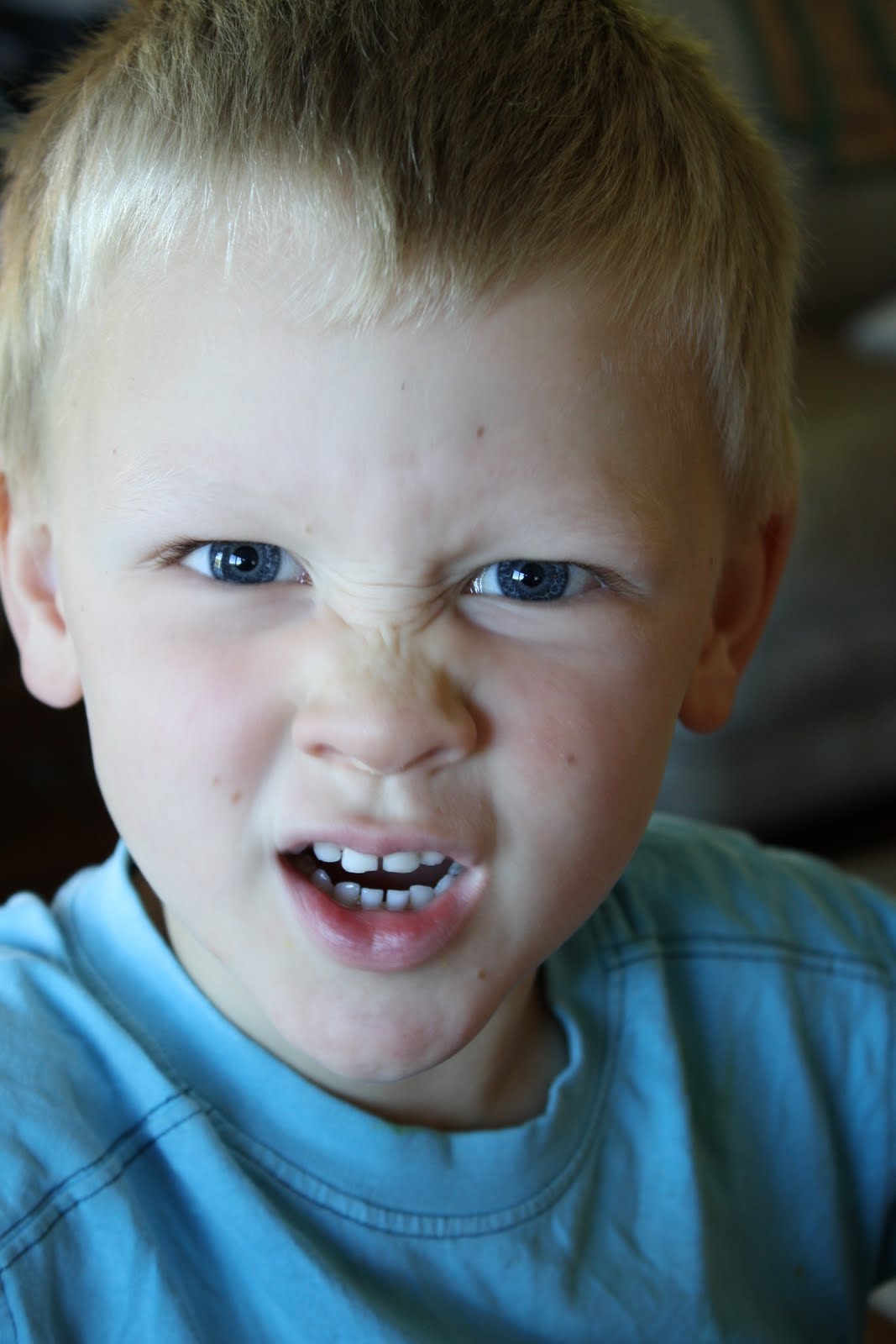 Well, you know what? This might sound odd and completely impossible, but when it comes to this camera, I’m jealous of me.

It’s bad manners to go on and on about a new toy, so I’ll try to restrain myself. It’ll be hard—no, nigh near impossible is more like it—but I’ll try. Manners make the world go round.

And I don’t want to be cast off our spinning planet into outer space.

(For more reasons than one. I don’t think Canon Rebels work real well in outer space.)

Mr. Handsome decided to take a nap this afternoon. It was the perfect opportunity to study perspective à la Rebel. (I told you minding my manners would be impossible.) 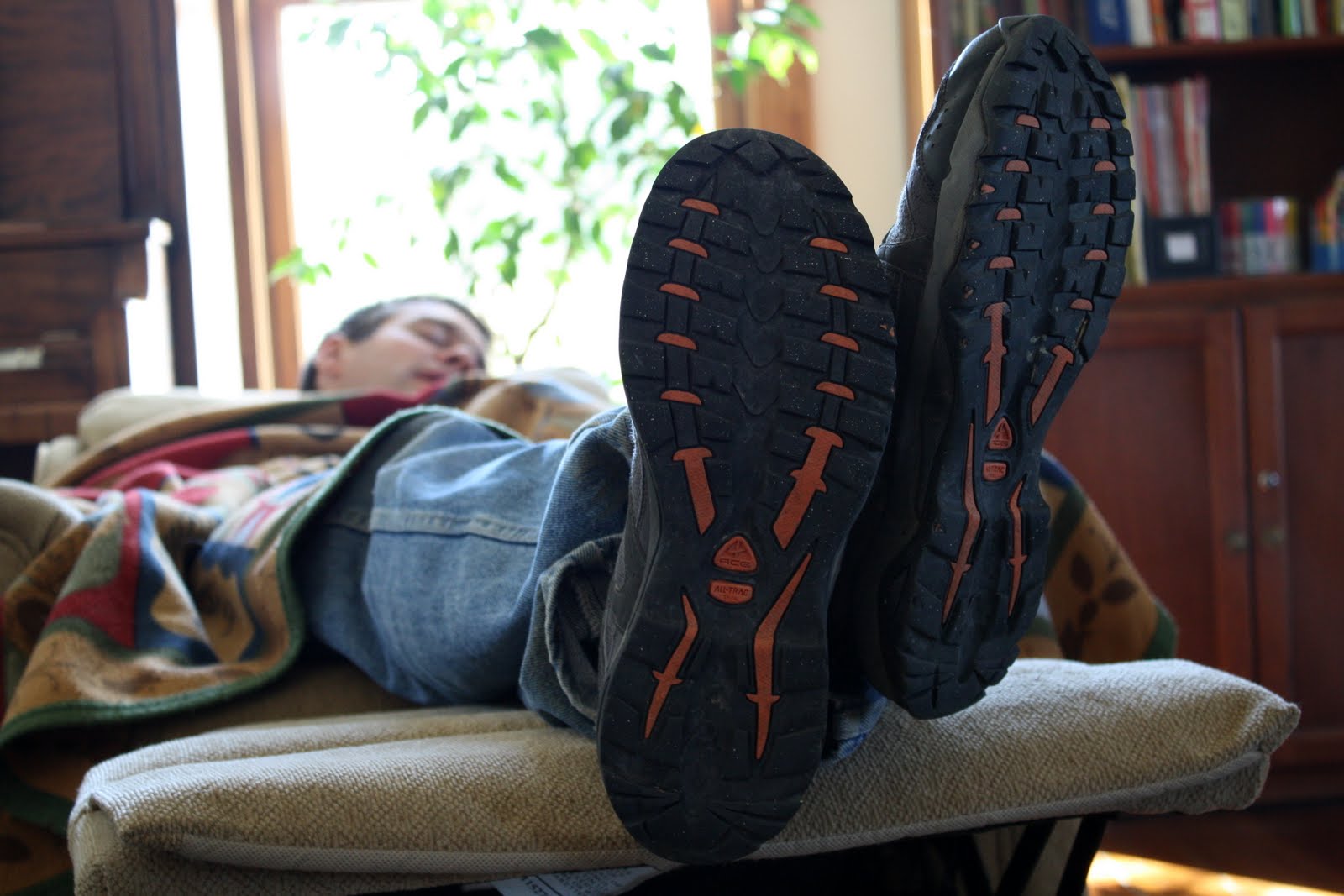 Who in the world wears shoes while sleeping? That is, like, the most uncomfortable nap ever! 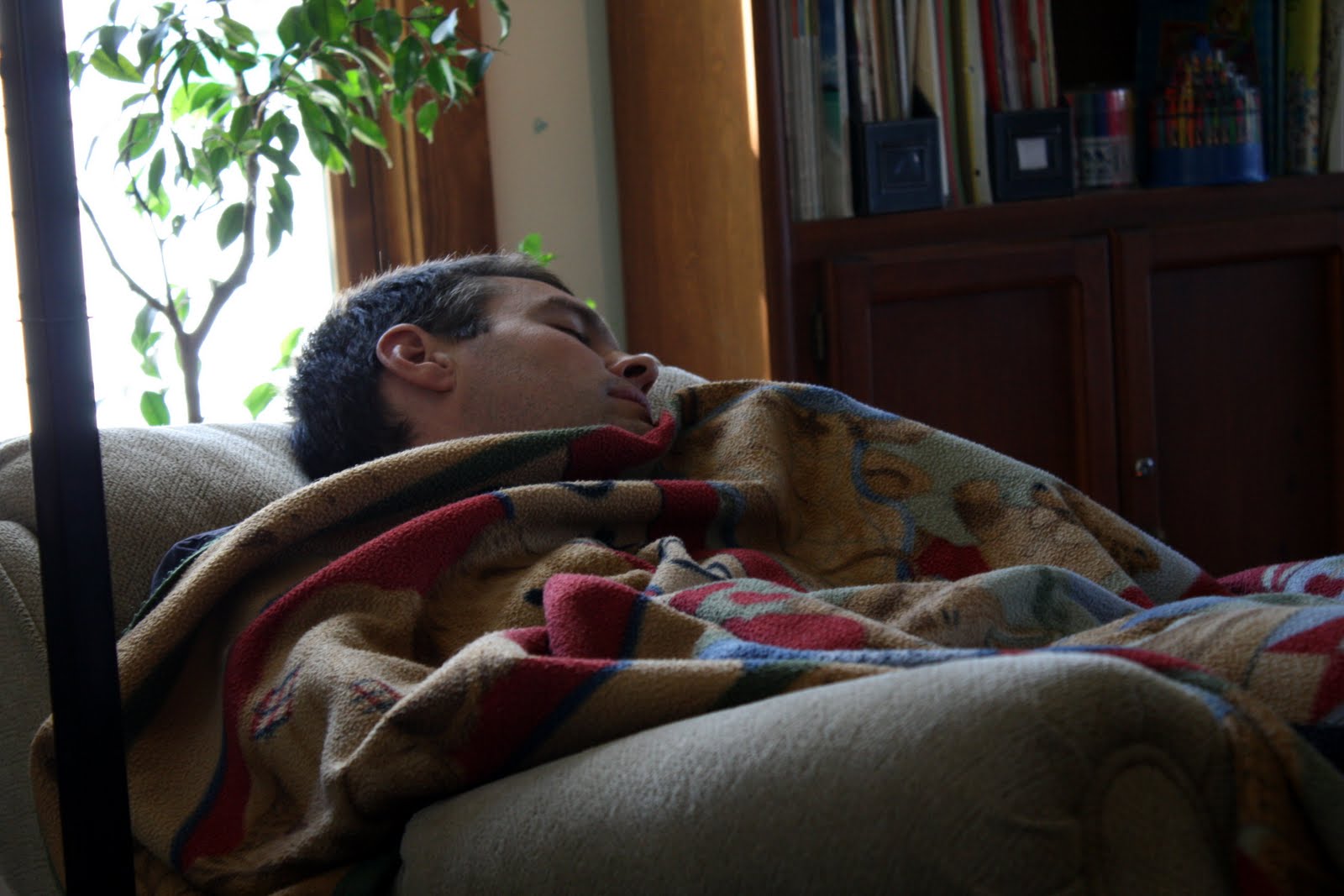 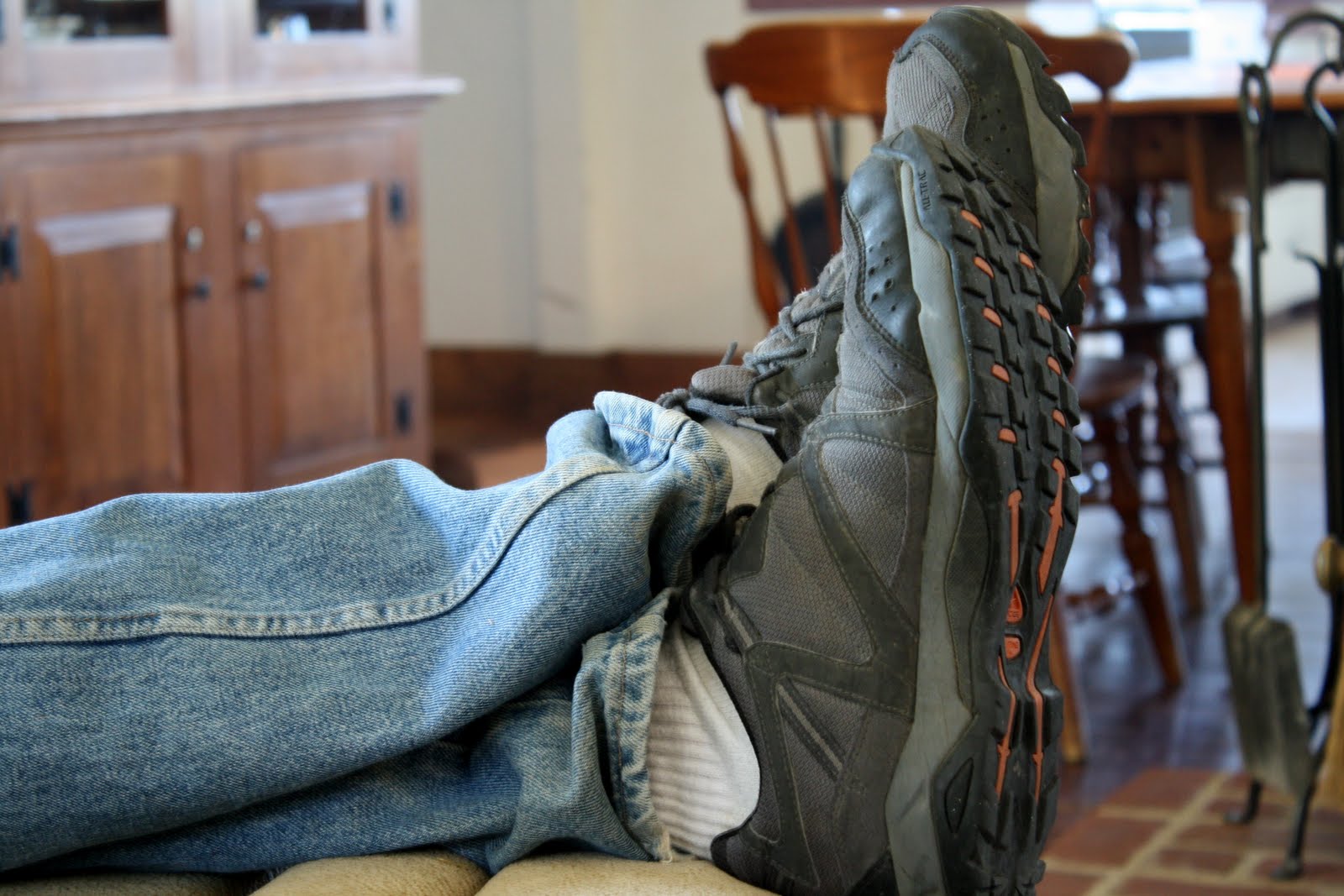 Side angle of the napper… 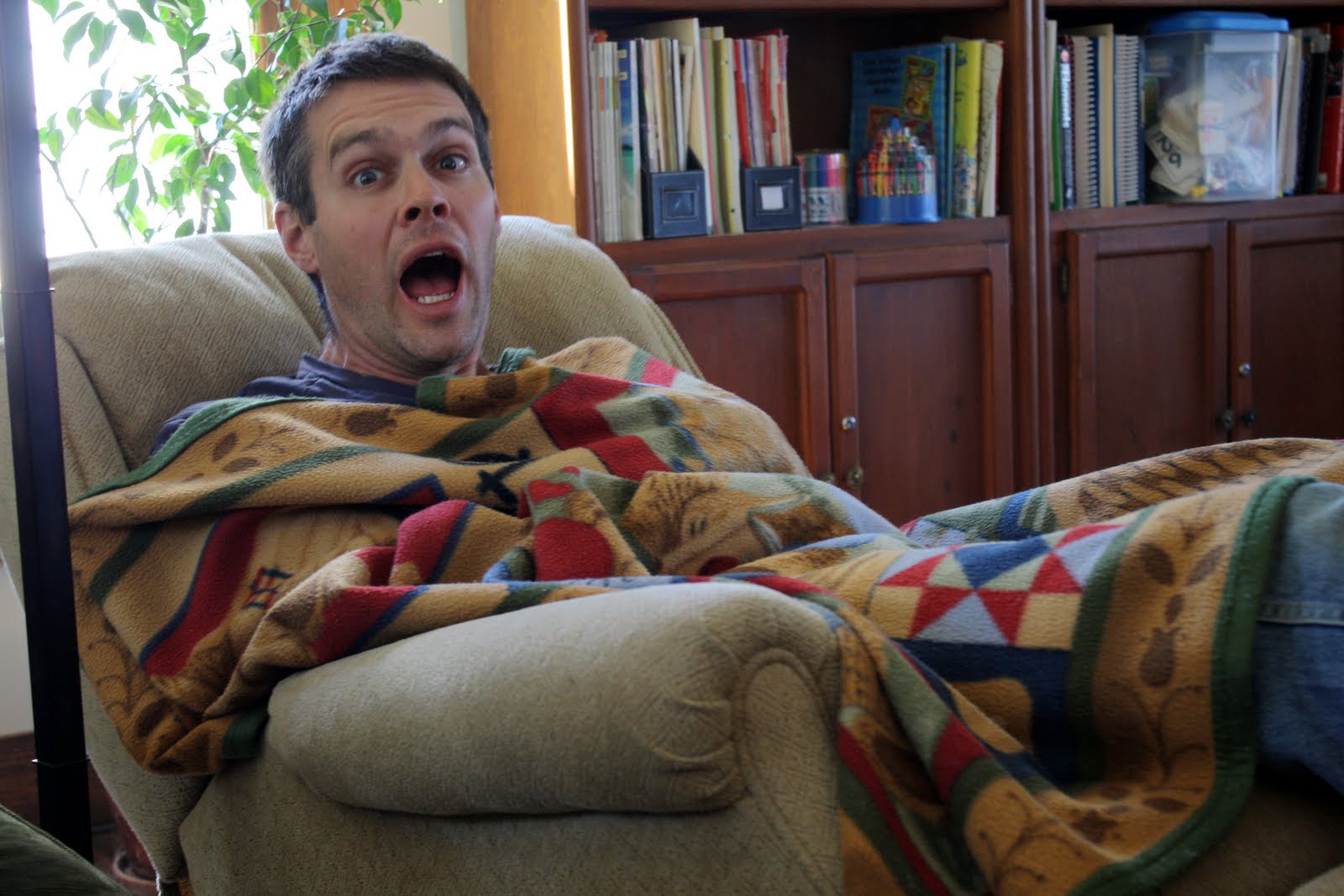 Oops. Okay, honey. I get the point. I’ll leave you alone now.

It’s one week and one day until lThe Donut Party of 2010. Crunch time is upon us. We’ve been sprucing up the outdoors, cutting down ratty shrubs and trees, tilling the garden under, pressure washing the house. Even Mother Nature got on board and gave us several days of rain so that we could have some green to go with our donuts. (A crispy brown summer segueing into a desolate cold winter would’ve been too much for me to bear. I so needed this green reprieve.) 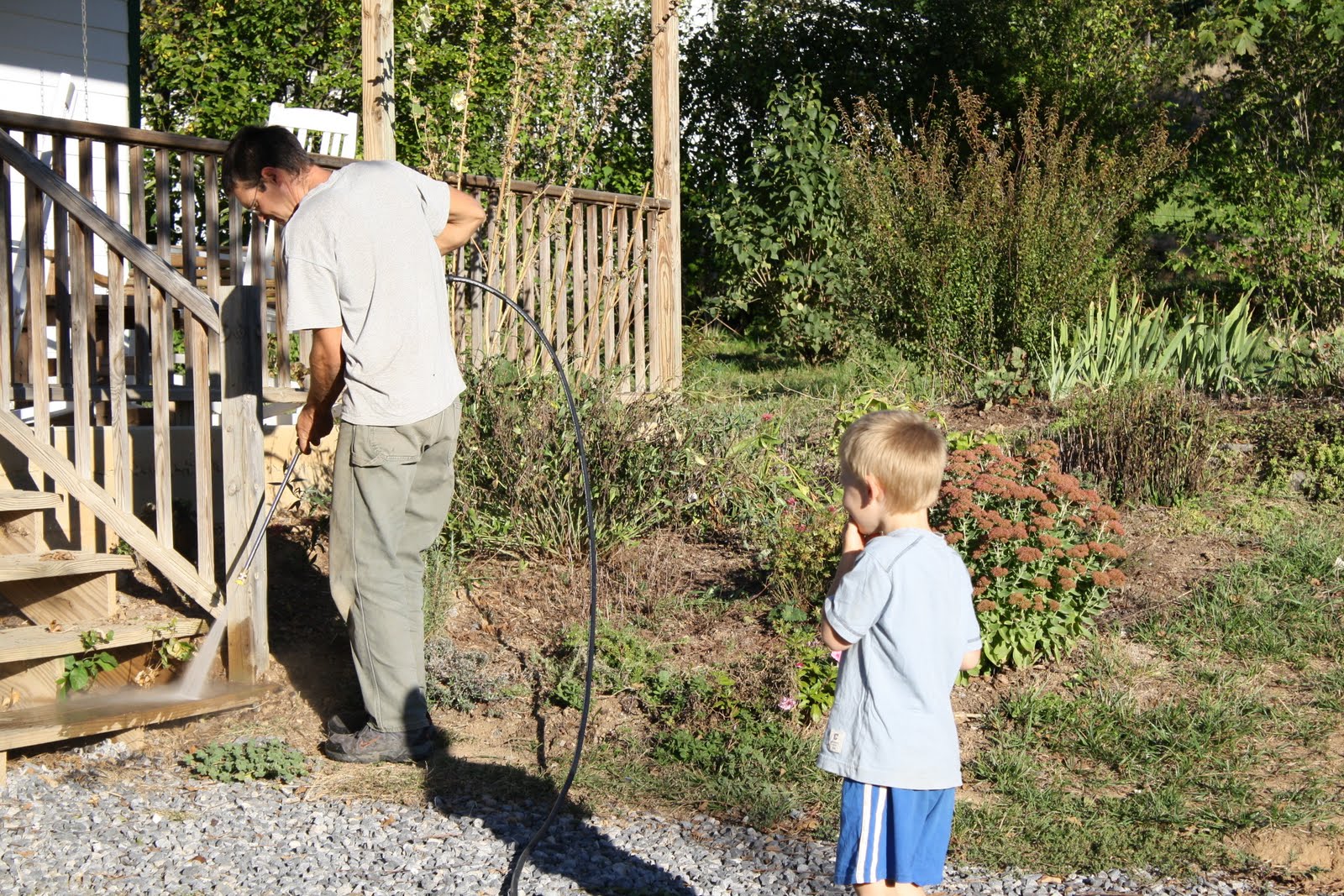 What’s left to accomplish? Well, there’s the window washing, deep cleaning, setting up, grocery shopping, hauling and transporting, and finishing touches of pretty. Then, of course, there are the demands of regular life (homeschooling, meal prep, laundry, and exercise) plus some special extras (overnight company, an almost-whole-day belly dance workshop, and church meetings).

Even though it’s all manageable, I feel mighty stressed about the whole thing. Stressed as in I’ll-probably-get-a-fever-blister stressed. Why can’t I just chill and go with the flow? Why do I allow myself to go through the angst when I know right now that everything will get done and we’ll have a great time? I wish my anxiety had a switch that I could flip to “off.”

Instead, I just flip out.

It’s a mind game, I know, and pity for me, I almost always lose when it comes to mind games.

The kids built another fort, this time using fence posts and old tarps. 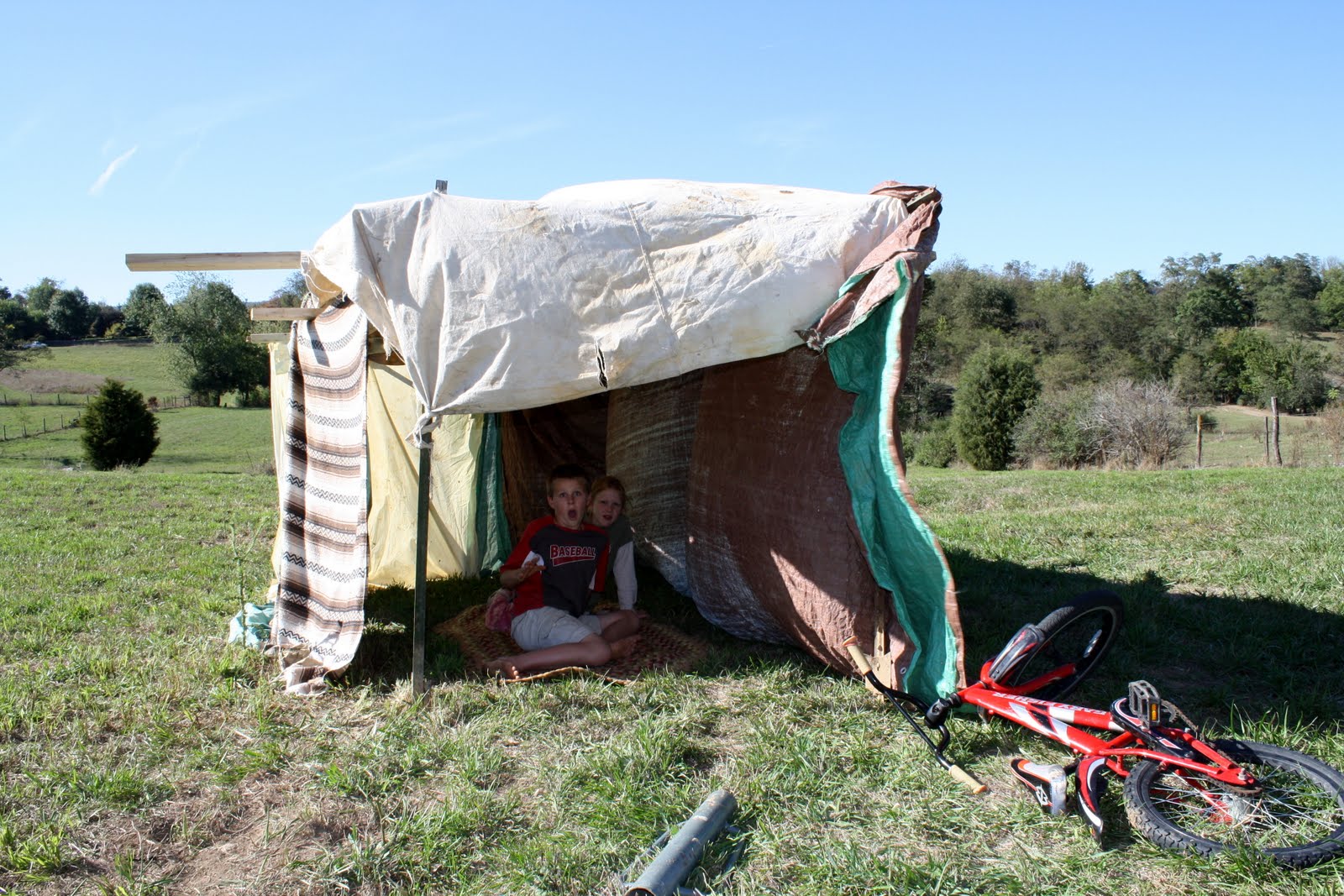 They first set up camp in the garden but once they realized that their fort had a longer life expectancy if it were relocated to the field, they tore down, piled everything in the wagon, and moved West. 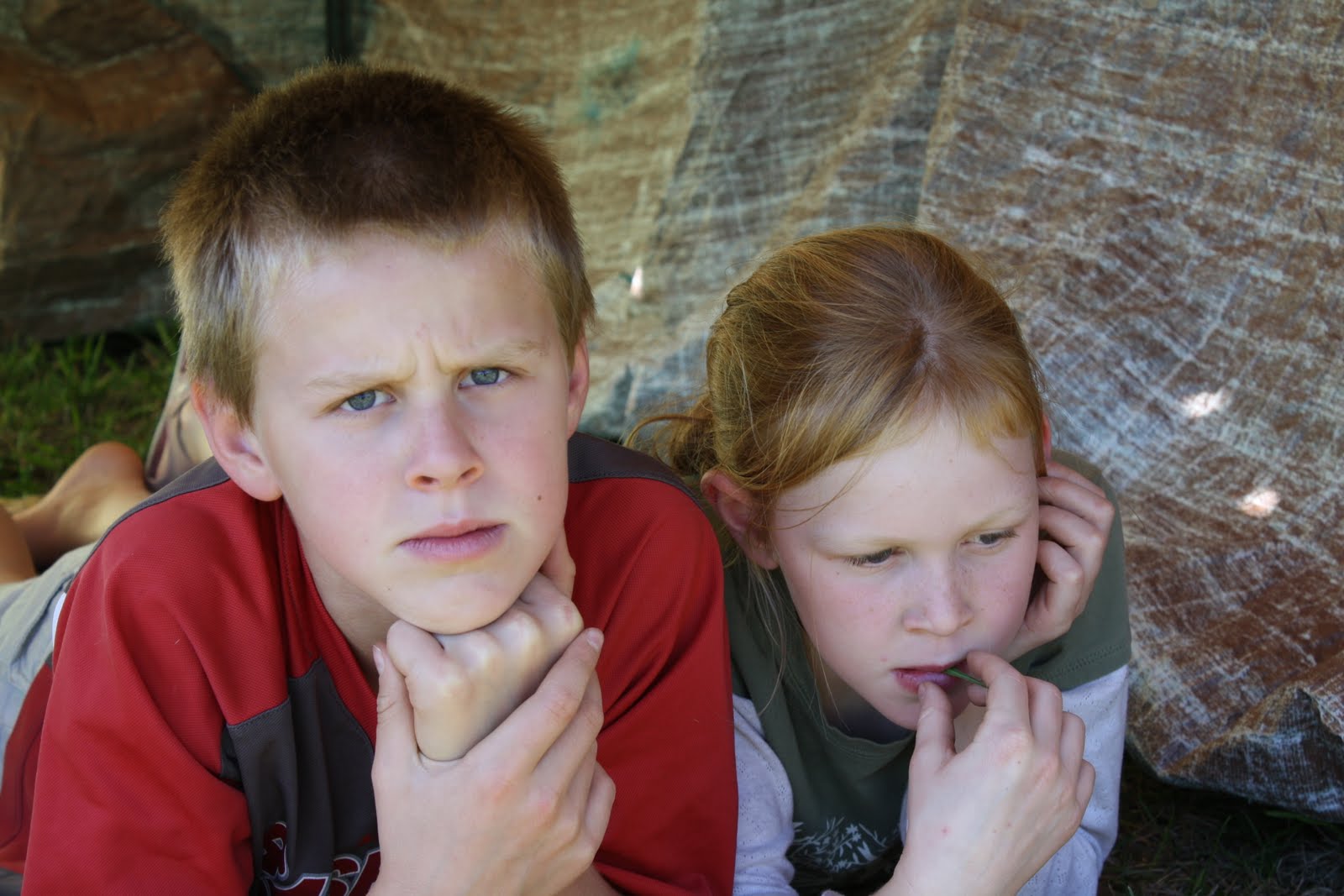 Yo-Yo and Miss Beccaboo have slept in it for the last couple nights. 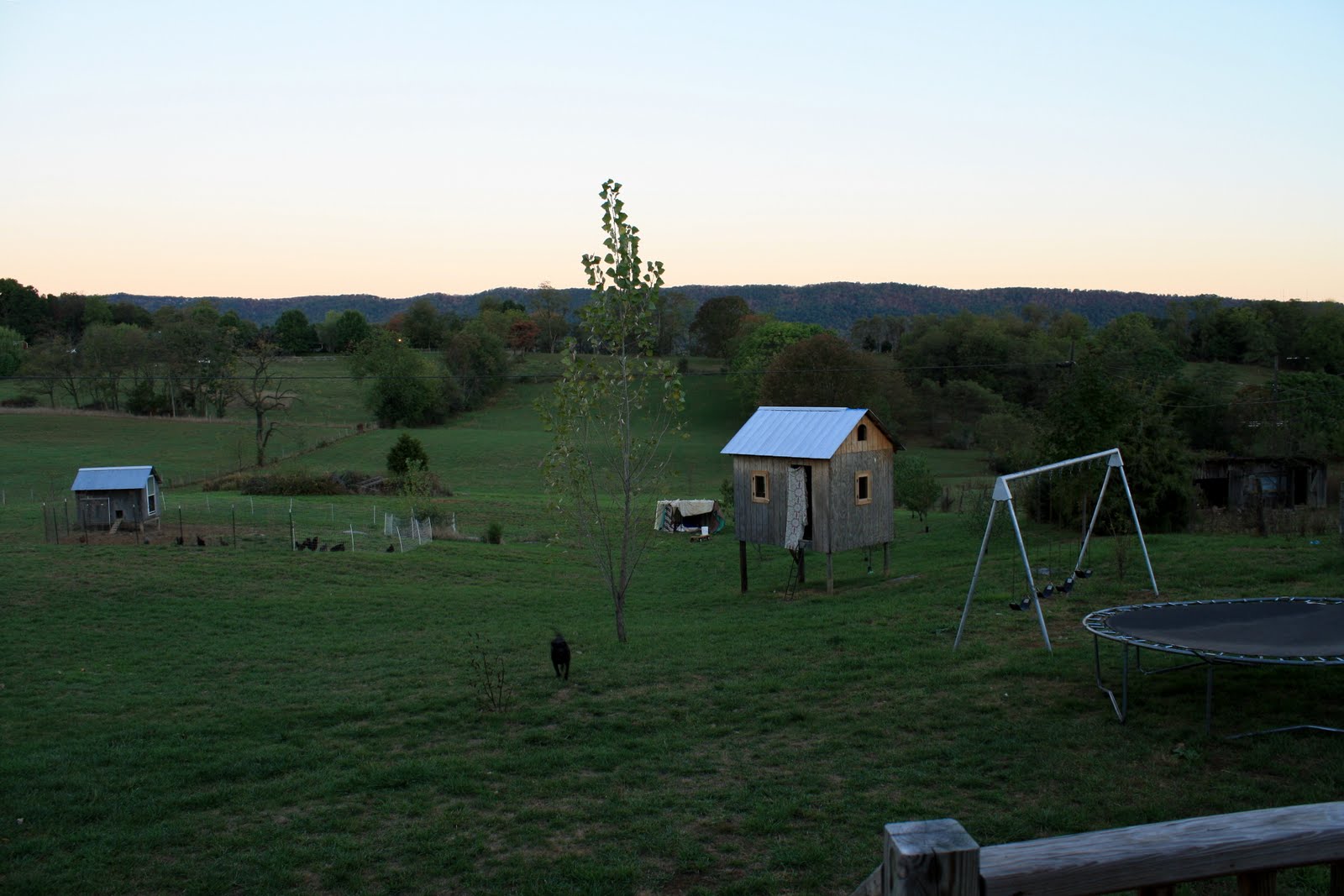 They love it out there in the wild. (Yo-Yo claimed that a chipmunk ran back and forth on his tummy this morning.) It’s where they belong.

Yesterday the kids rediscovered the glories of mud. 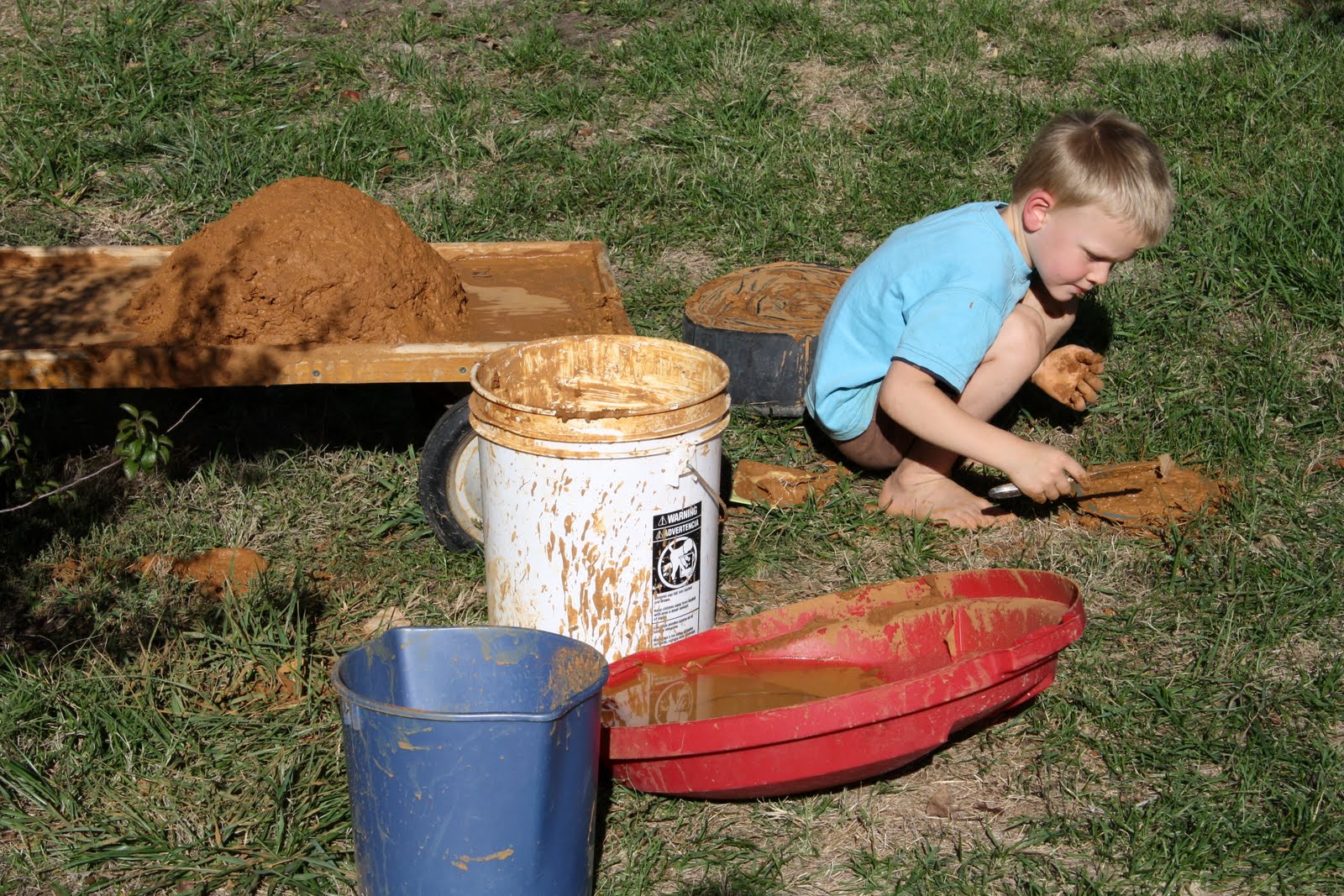 Yo-Yo filled a five-gallon bucket with clay and turned it over to The Baby Nickel. 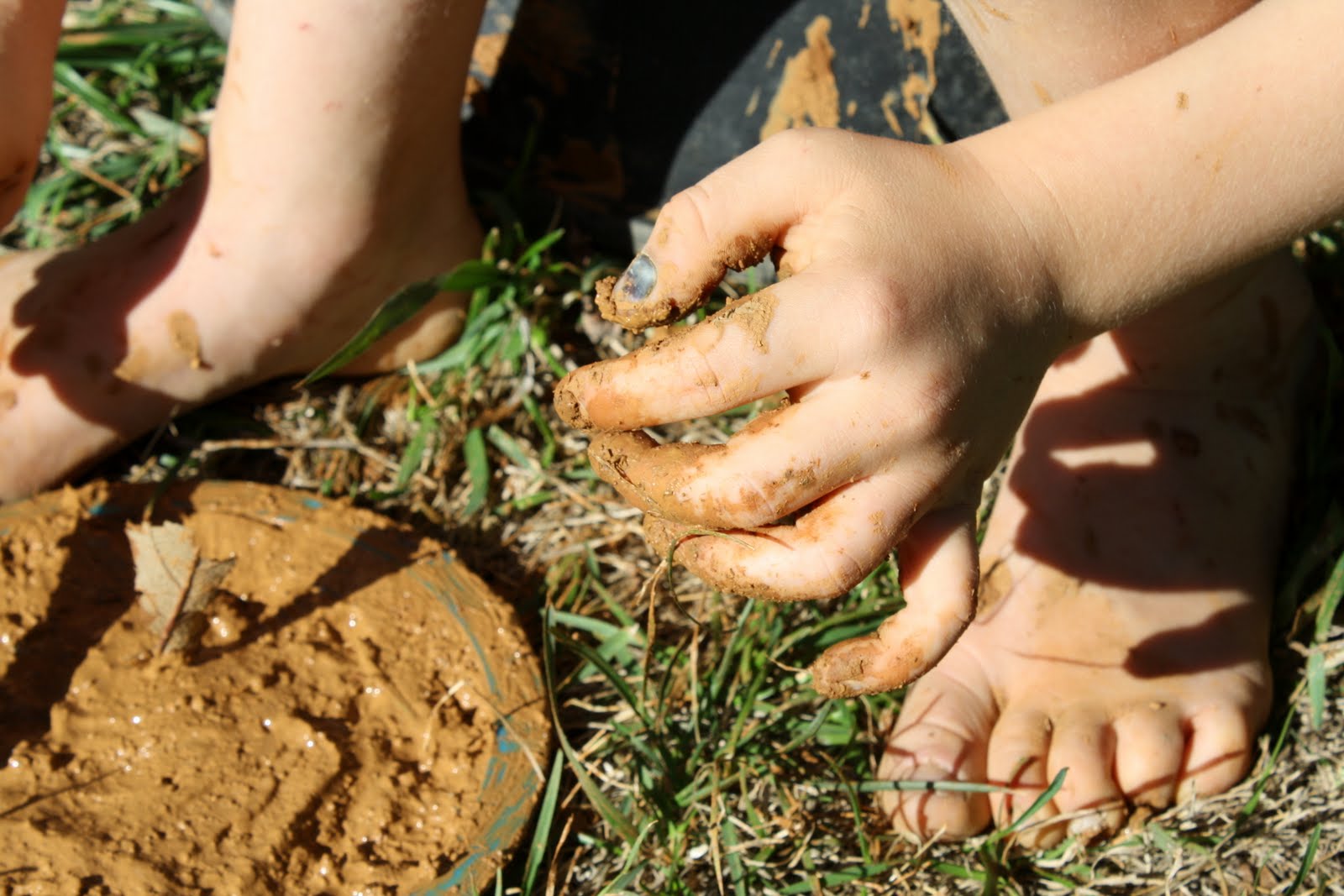 Notice the hammer-smashed thumb nail. It sure did take a good whacking.

Yo-Yo also dug himself a hole… 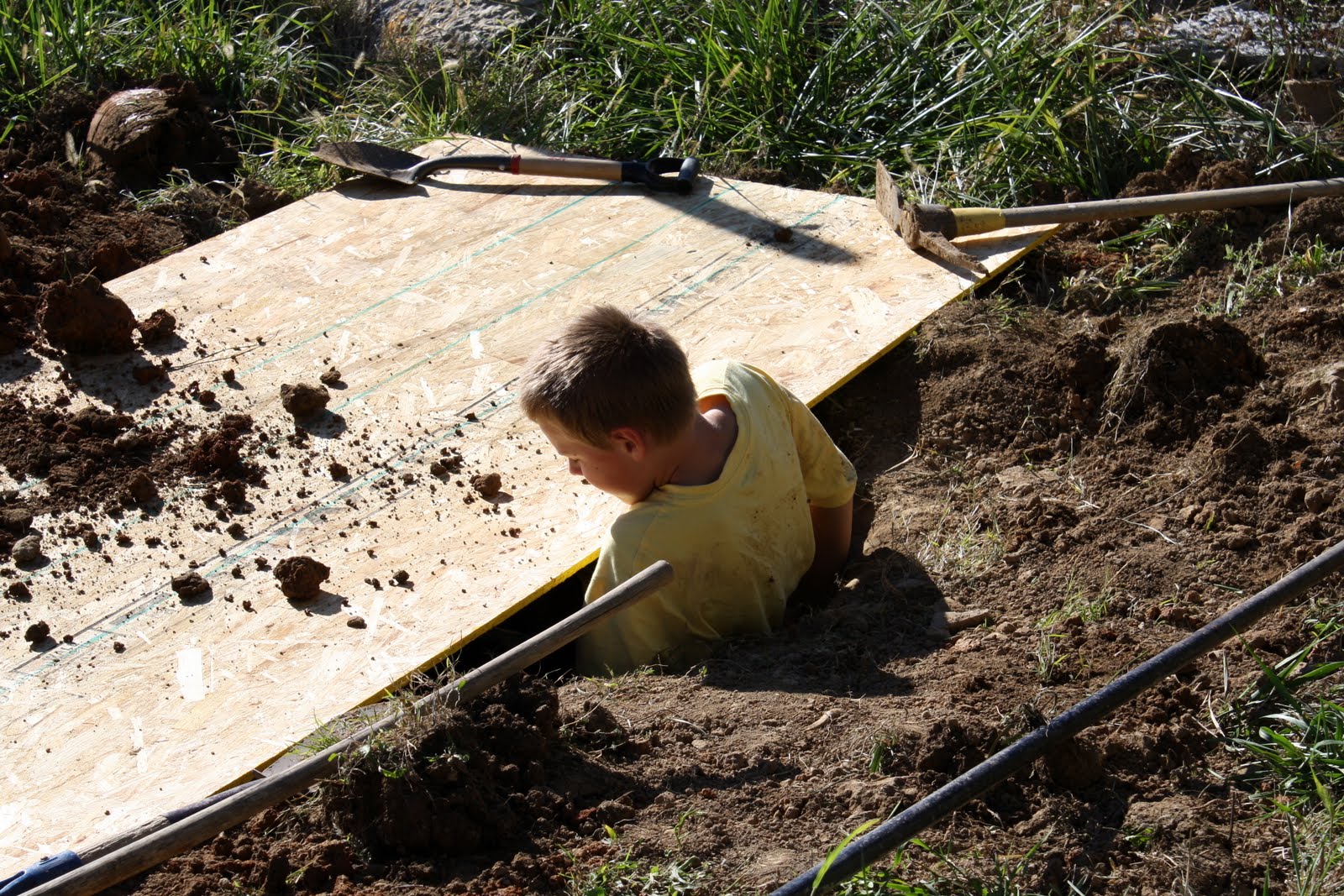 and then laid in it. 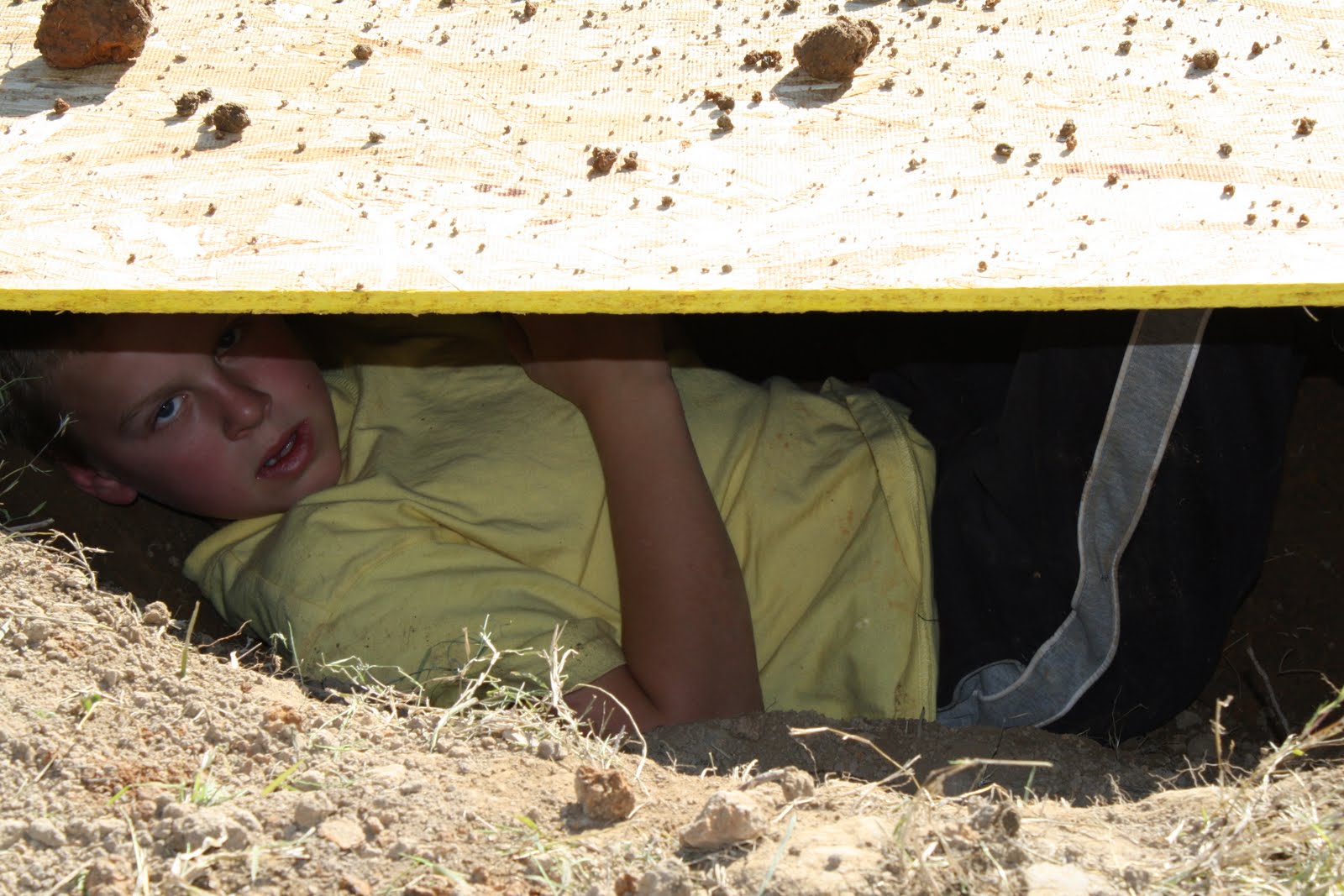 It just occurred to me that I didn’t have Yo-Yo take a shower last night. Clearly, I wasn’t thinking. 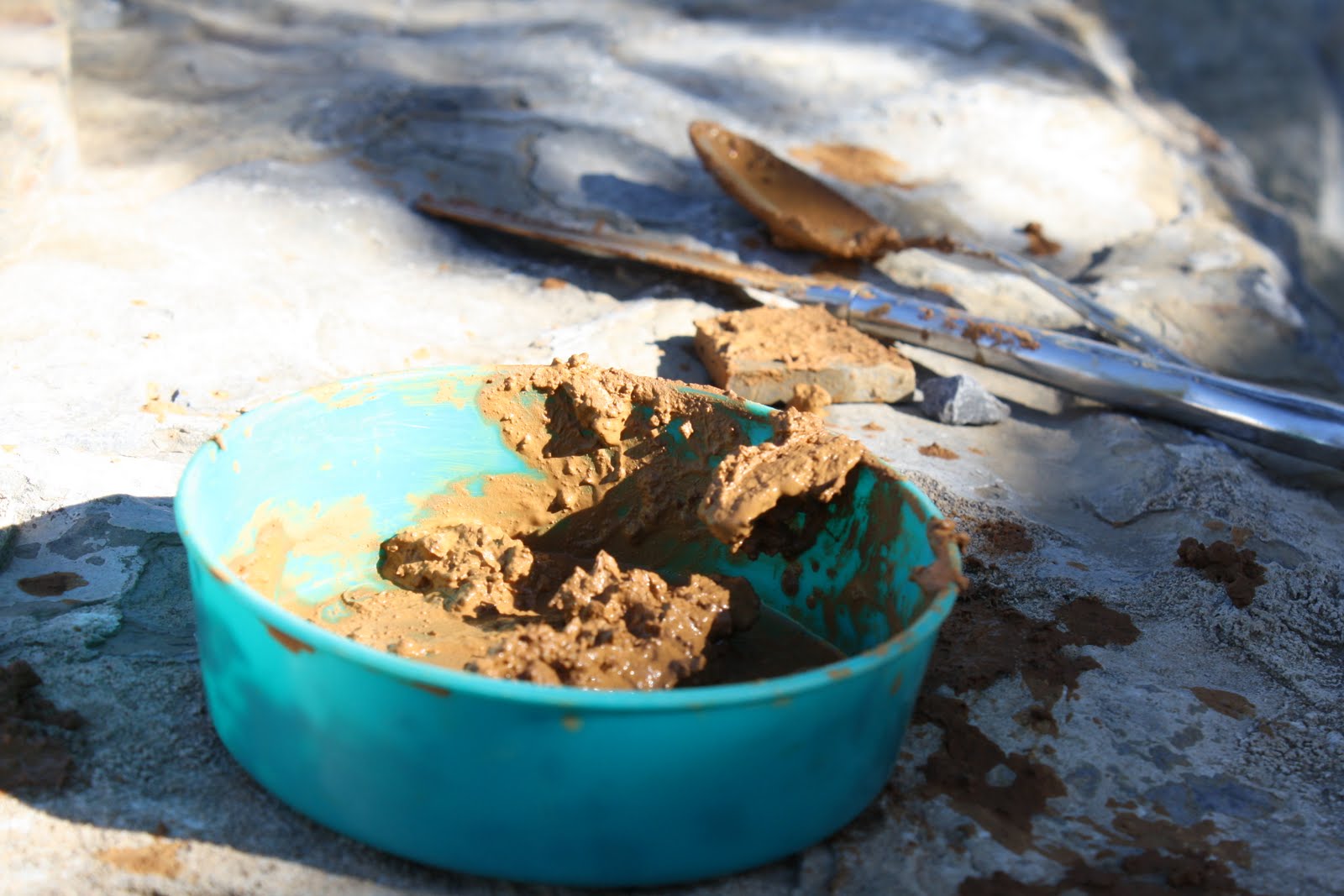 I also keep finding my butter knives in the oddest places—like on the rocks in the flower garden.

I have a new pie crust recipe.

You: Are you KIDDING, Jennifer? You already have, like, 17 pastry recipes on this blog and you are talking about ANOTHER one now? What is WRONG with you? You can only eat so much pie, you know.

It’s really rich, this pastry is. It’s so rich, in fact, that even if the pie filling doesn’t bubble over, the oven still smokes because the crust itself bubbles and froths and drips droplets of grease onto the oven floor. It’s my kind of crust. 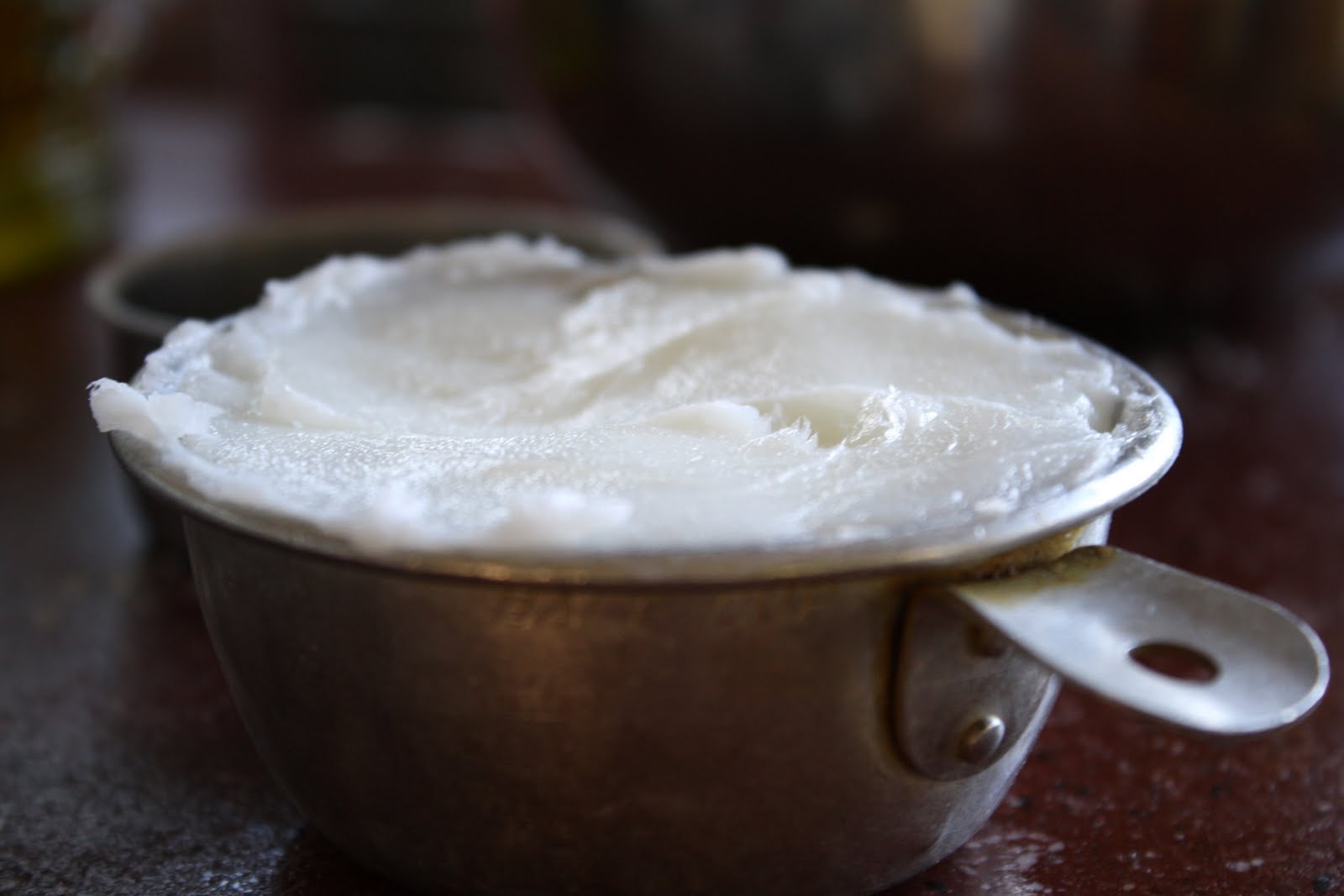 It has both lard and butter, then an egg, too, for good measure. It mixes up right quick in a food processor, though the machine is not necessary—you can do it easily enough with your phalanges. 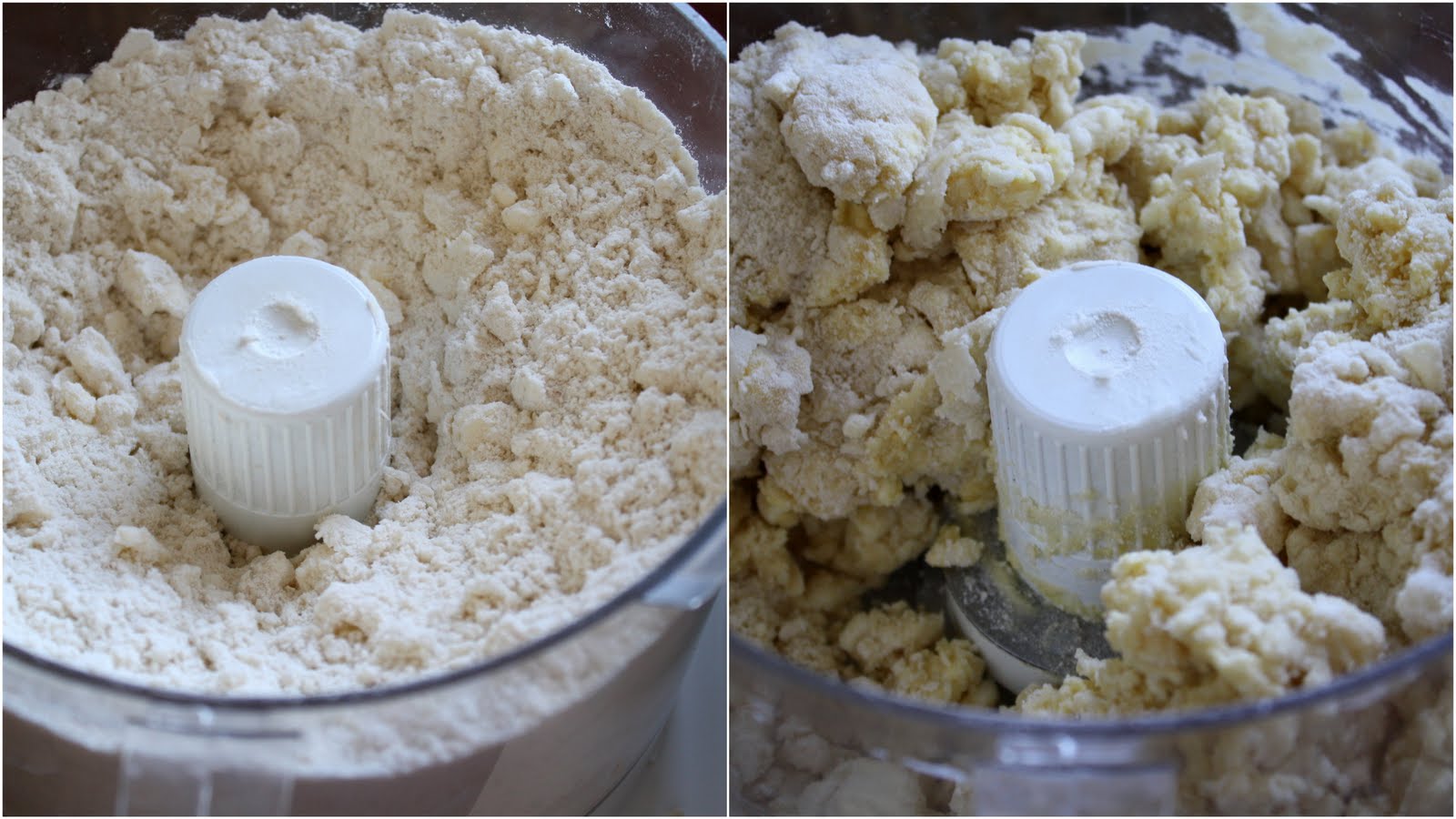 I think I’m finally getting good at not over-mixing the pastry. Look at those nice big globs of fat. Yum-yum. 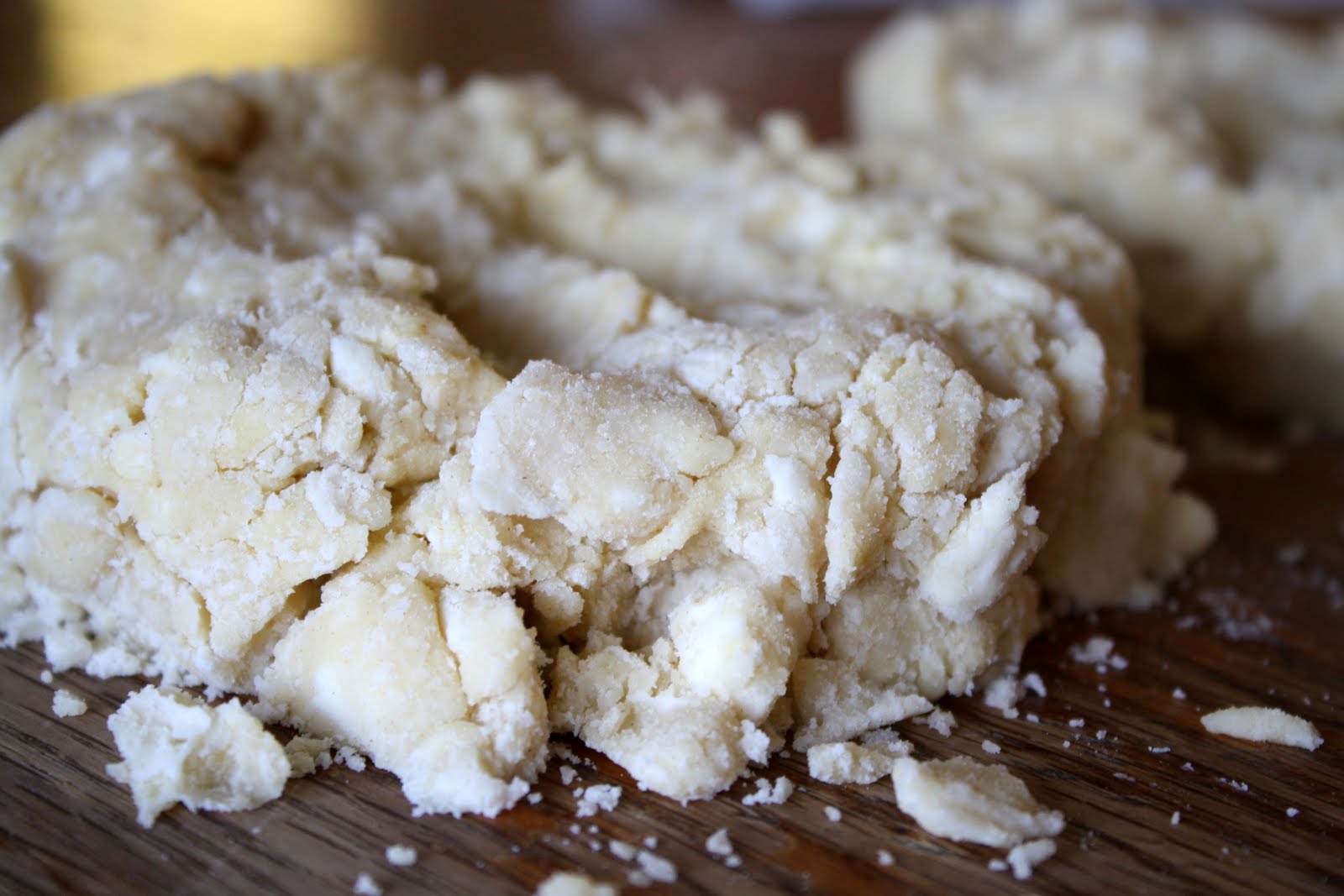 I made a double batch of pastry today since it’s Mr. Handsome’s birthday and he prefers pie to cake. I made an apple pie and a red raspberry-rhubarb pie (with some blueberries thrown in to bulk it up), and I think I’ll mix up a batch of sour cream ice cream to serve alongside even though the birthday boy won’t be able to have any. Stomach problems, you know. It’s what happens when you start getting old. 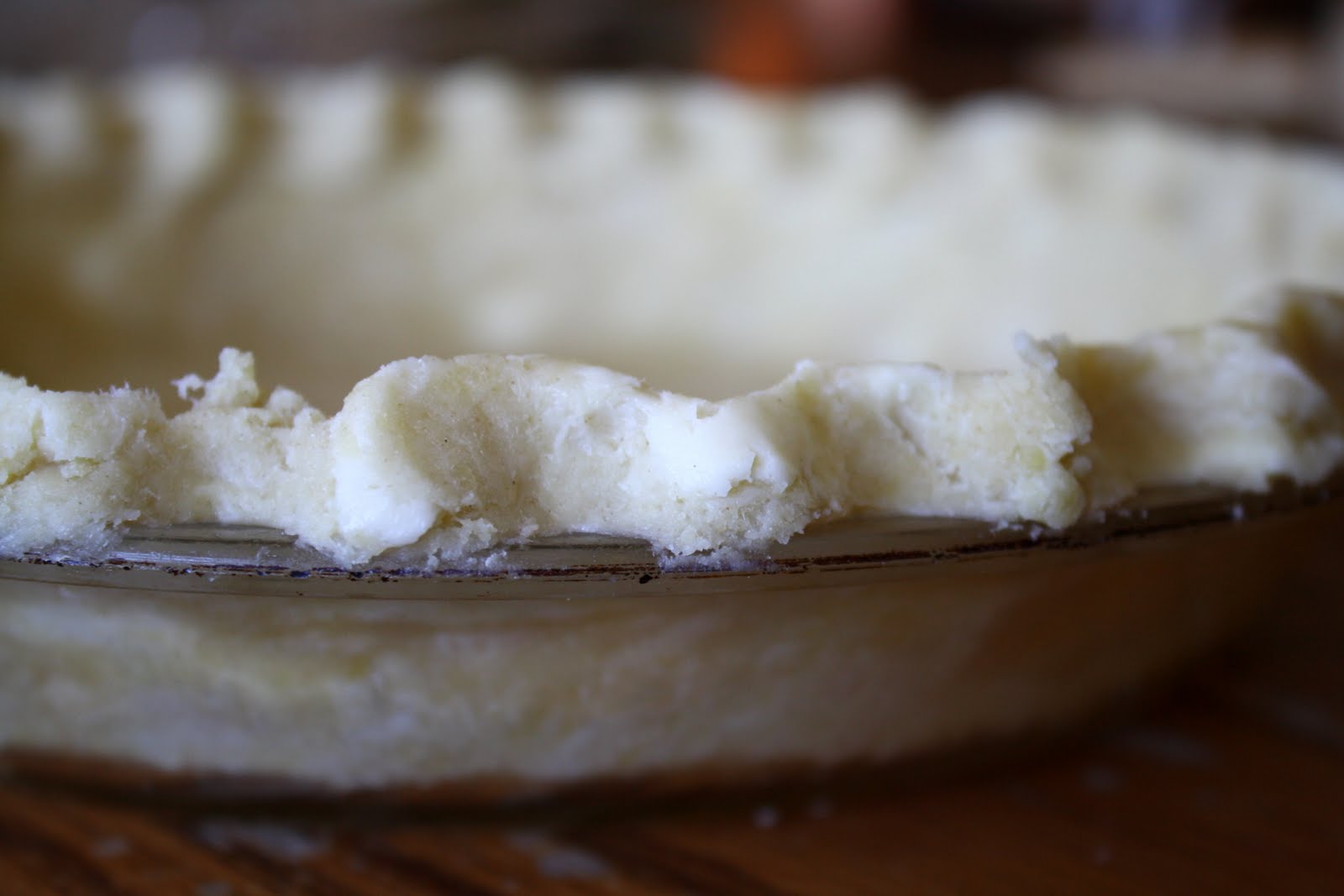 Pie Pastry, with lard and egg
Adapted from Julie of Dinner With Julie

Put a cookie sheet on the bottom rack of the oven to catch the crust drips.

Also, this makes a killer quiche crust. And pastry crackers!

Put the flour and salt in the food processor and pulse once. Add the fat and pulse briefly, just until the large pieces are broken up.

Put the beaten egg into a half-cup measure. Add the vinegar. Top it off with cold water. Add the liquids to the flour and fat and pulse several times until it starts to come together but is still crumbly-dry in spots.

Dump the whole mess out on the table and gently, with as little touching as possible, draw the shaggy dough together into one ball. Divide the dough in half, shape each half into disks, and wrap with plastic wrap. Chill in the fridge for a couple hours (or days) before rolling out for a pie, or bag and freeze for a pie down the road.

This same time, years previous: green soup with ginger, happy pappy-style cornbread. Look at that! Serve these two together and you have a right fine meal to fill your little tummy wummy.