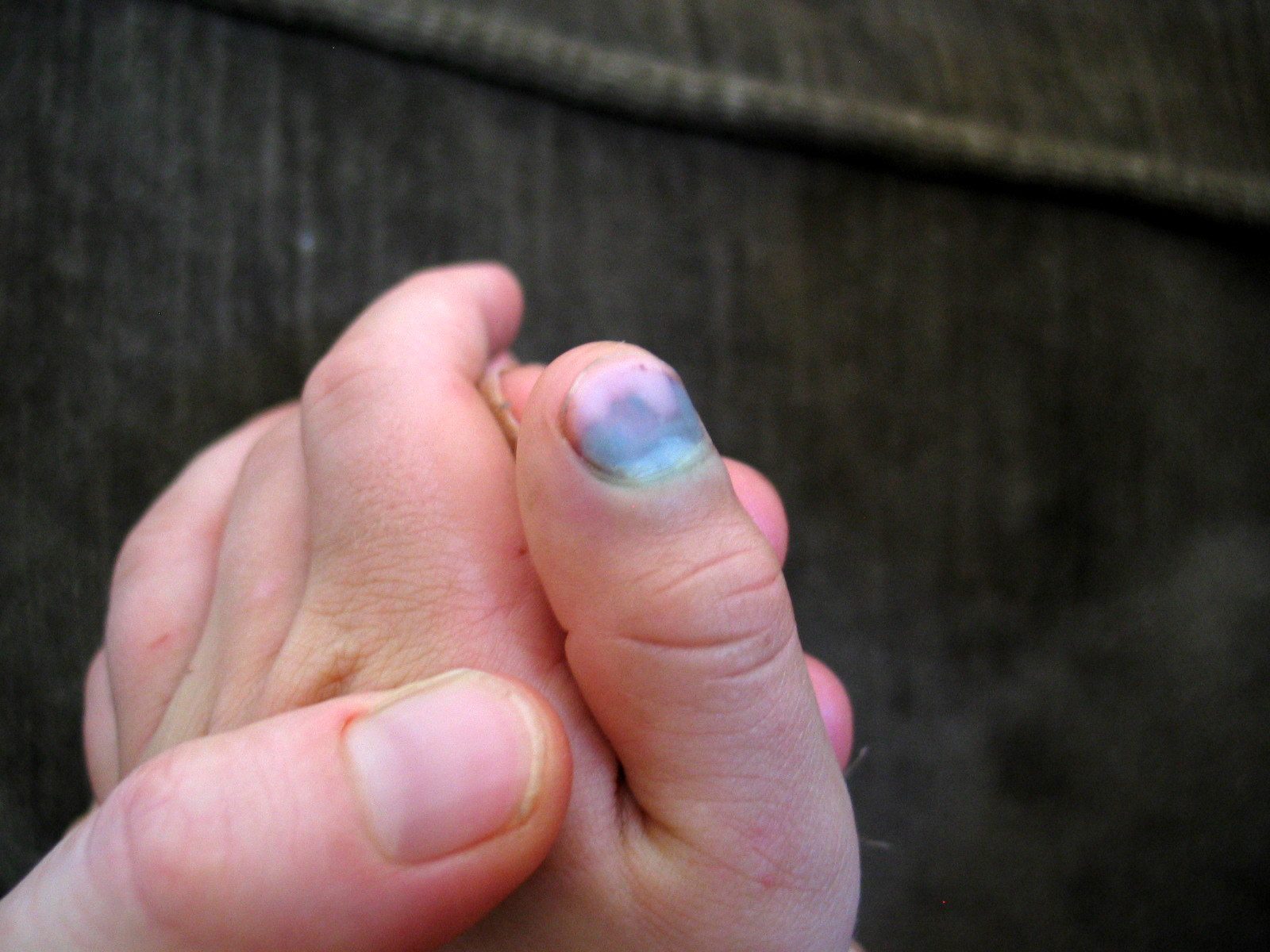 Just like the enthusiastic breeze that’s been whooshing through my windows and setting my papers a-flying, so is my head. It’s like my ears (eyes and mouth, too) are all open windows—anything that enters through those portals upends any ordered thinking that I might currently be applying myself to, setting my thoughts all a-swirl. No sooner do I pin down an idea to ponder than—whoooooosh!—a new gust of ideas comes blowing in, knocking whatever precious idea I was dwelling upon to the far recesses of my brain. I fumble and grab, bend down and pick up, stack neatly and weight down with heavy objects, but it’s no use. The ideas refuse to stay put.

I am still a picklehead. After nearly two months with zero commercial hair products—no gel, no shampoo, no conditioner, no hair spray, no mousse (not that I employ all of those products on a regular basis, but I’m making a point here)—I went to my hair stylist dude guy and plopped my butt down in the chair.

“Now, Jay,” I said, says I. “I want you to tell me what you think about my hair. I’ve changed hair products and I want to know if you think my hair is better or worse for it.”

Then I waited patiently while Jay lifted and looked, touched and fluffed. “It looks good,” he said finally. “The ends seem a little dry, but I think that’s because you need a trim. Why? What are you using now?”

“Baking soda and vinegar!” I half burbled, half giggled, practically giddy with pride.

And so I told him about my formula. He had never heard of such a thing which surprised me. I figured they warned stylists-in-training about weirdos like me, probably in a special class called “All the stupid things that people do to their hair and why they don’t work,” but apparently Jay didn’t take that one.

So anyway, since then I’ve washed my hair with shampoo once or twice or thrice, and I use a smidge of blue goop to mold my hairs into their proper place, but for the most part, I’m a die-hard picklehead. In fact, I’m not going to buy anymore shampoo. When the few bottles we have run out, I’ll coach the rest of the fam in the art of being pickled.

Just in case you didn’t believe me about our traumatic Saturday, here’s a picture of the Baby Nickel’s poor smashed thumb.

He cried for a long time after whacking it with that hammer.

And he still winces every time I thoughtlessly grab his hand to wipe it with a dish cloth. 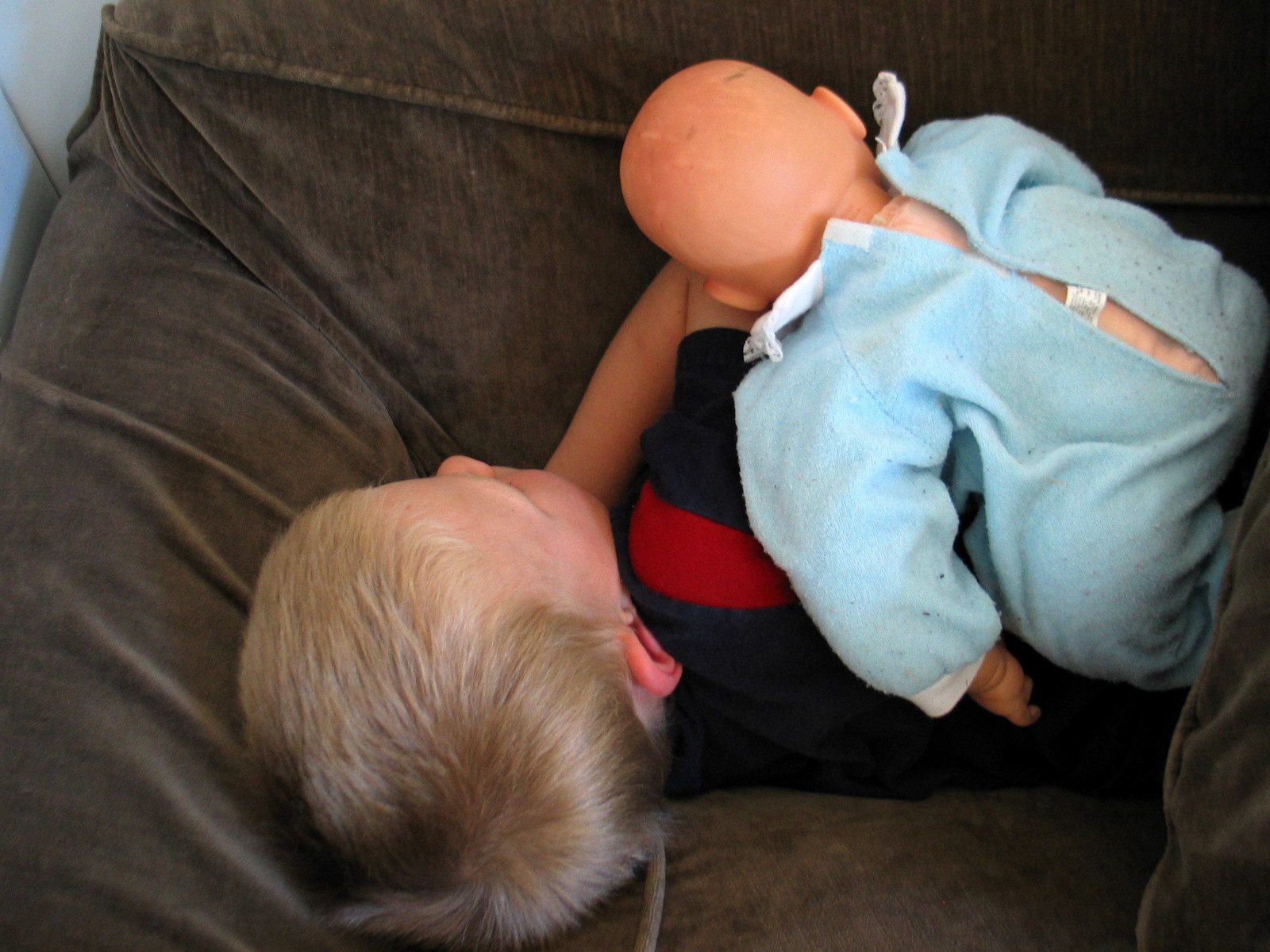 (I interrupted his nap for that picture. I went into the room and woke him up just enough to get him to sleepily untuck his arm.)

Tonight, after I told him to stop trying to clean out all the purple under his nail with a nail file, he told me his interpretation of the thumb-whacking event: Hammers have lots of purple in them and when it hits it makes the purple go through. That’s what.

Last night a couple of us dancers (ha! that sounds just a tad bit more professional than my skill warrants, but I’ll run with it) broke into our instructor’s house (she’s sunning herself on some distant beach) to practice our moves.

Except that her front door sticks so it makes breaking in rather difficult. You have to pull the door towards you and push down really hard on the knob and then—wah!—the door flies open. Only problem is, the door knob is unusually close to the door frame so you leave a bit of your knuckle skin behind every time you enter.

Fortunately, I also know where she keeps the band-aids, bulk boxes of them probably purchased to bandage all the skinned knuckleheads.

(I’m thinking I might send my husband over there to reshape the door, whatever that means. Think she’d mind?)

(And while he’s at it, I’ll have him replace the light bulbs in her outdoor lamps. If anyone would have seen us teeter-tottering our way down the stairs at the end of the walkway last night, they would’ve thought we were absurdly inebriated.)

This is our bath water. We only get baths once a week. 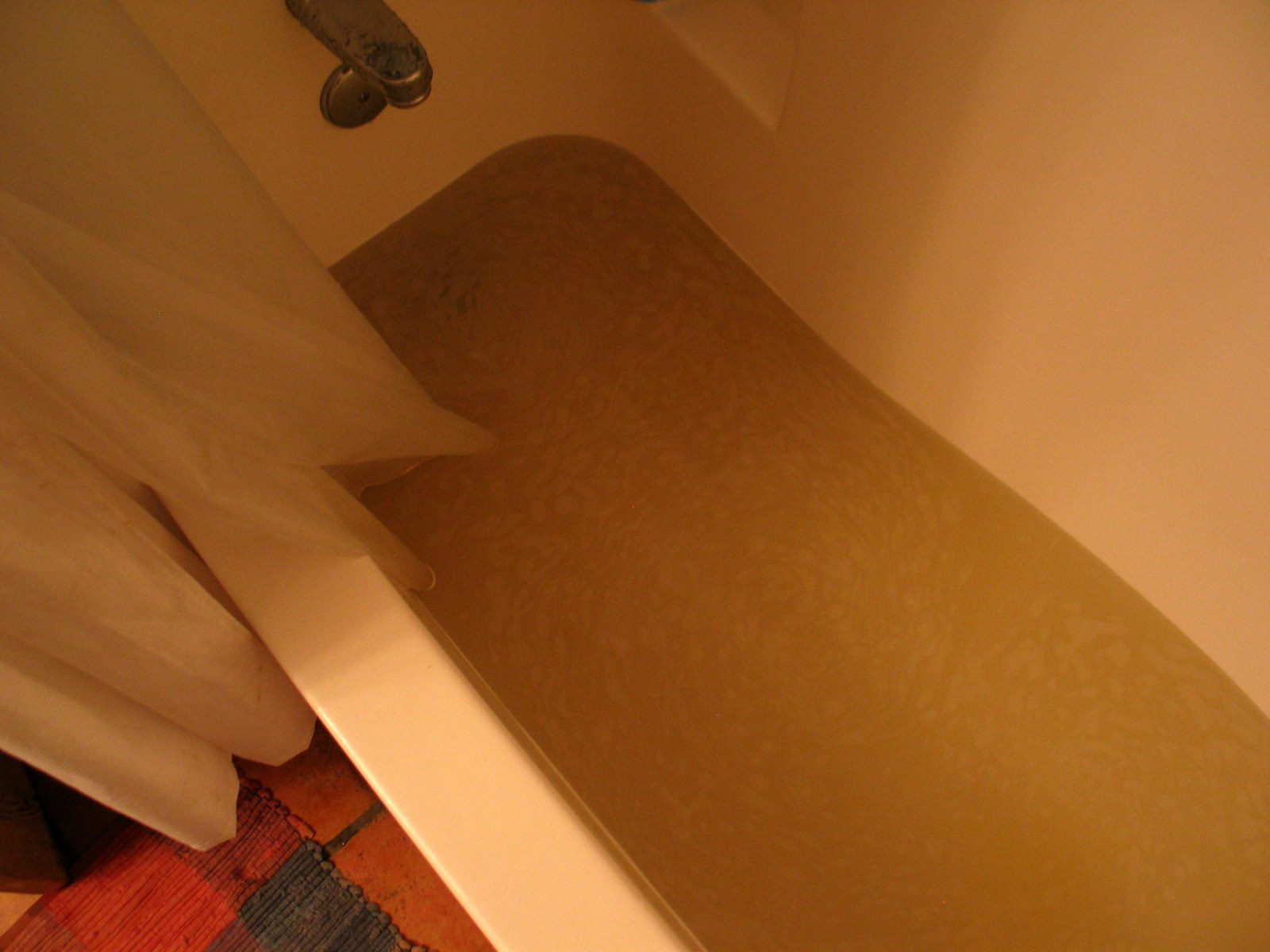 Come Saturday night, we put a little water in the tub and bathe the Baby Nickel. Then in hops Sweetsie and in goes a little more water. And so on, up through Miss Beccaboo, Yo-Yo, me, and finally Mr. Handsome.

Please tell me you didn’t believe that.

Though I do know a farming Canadian family (or the son of) who did just that.

No, we get baths almost daily and that dirty water is from one day’s worth of four dirty kids. They hop in, soap up, and then stand to rinse off with clean water. We’re speed demons where bath time is concerned. No rubber duckies in this family.

I never showed you what other escapades the kids have been up to. 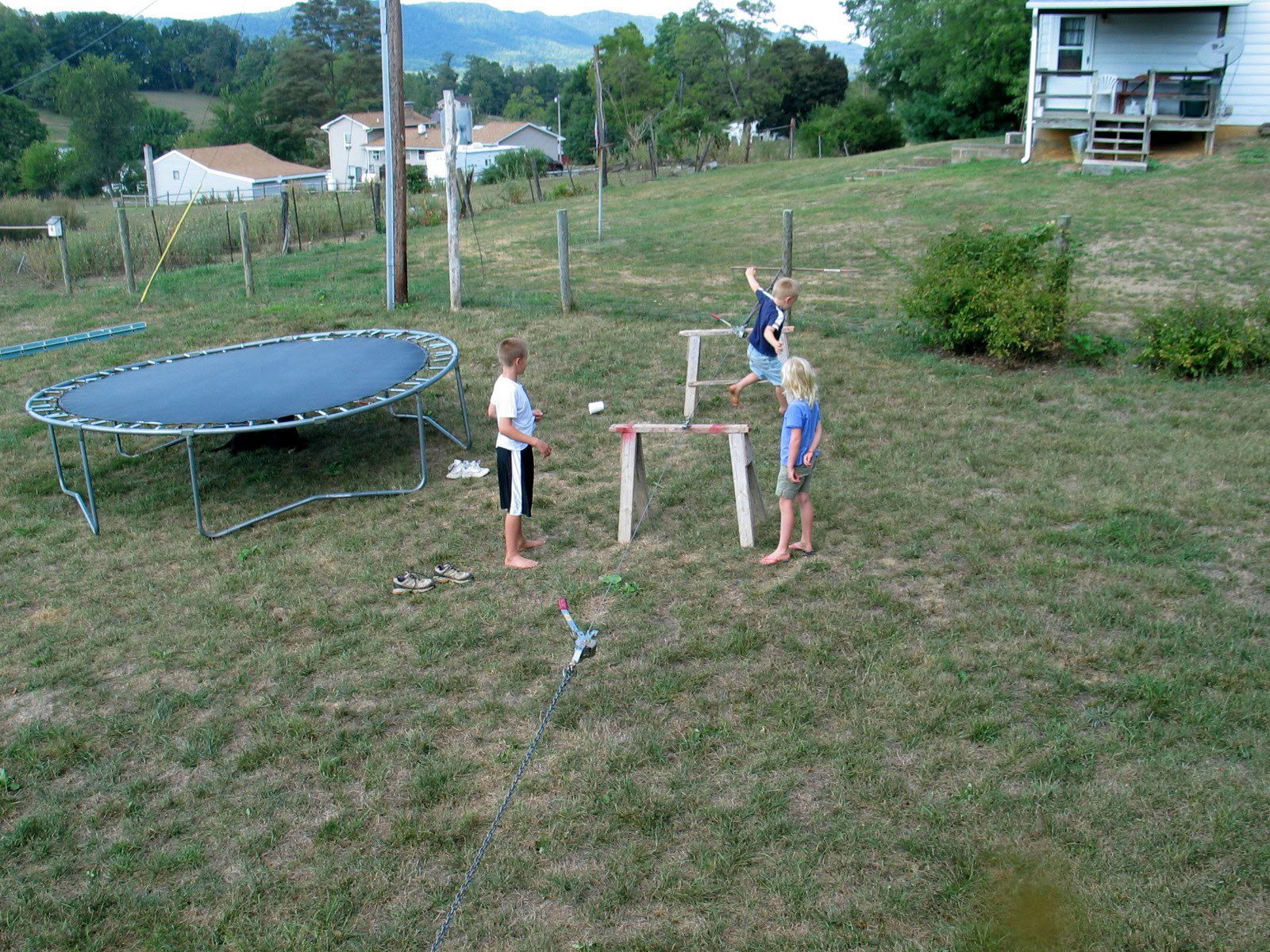 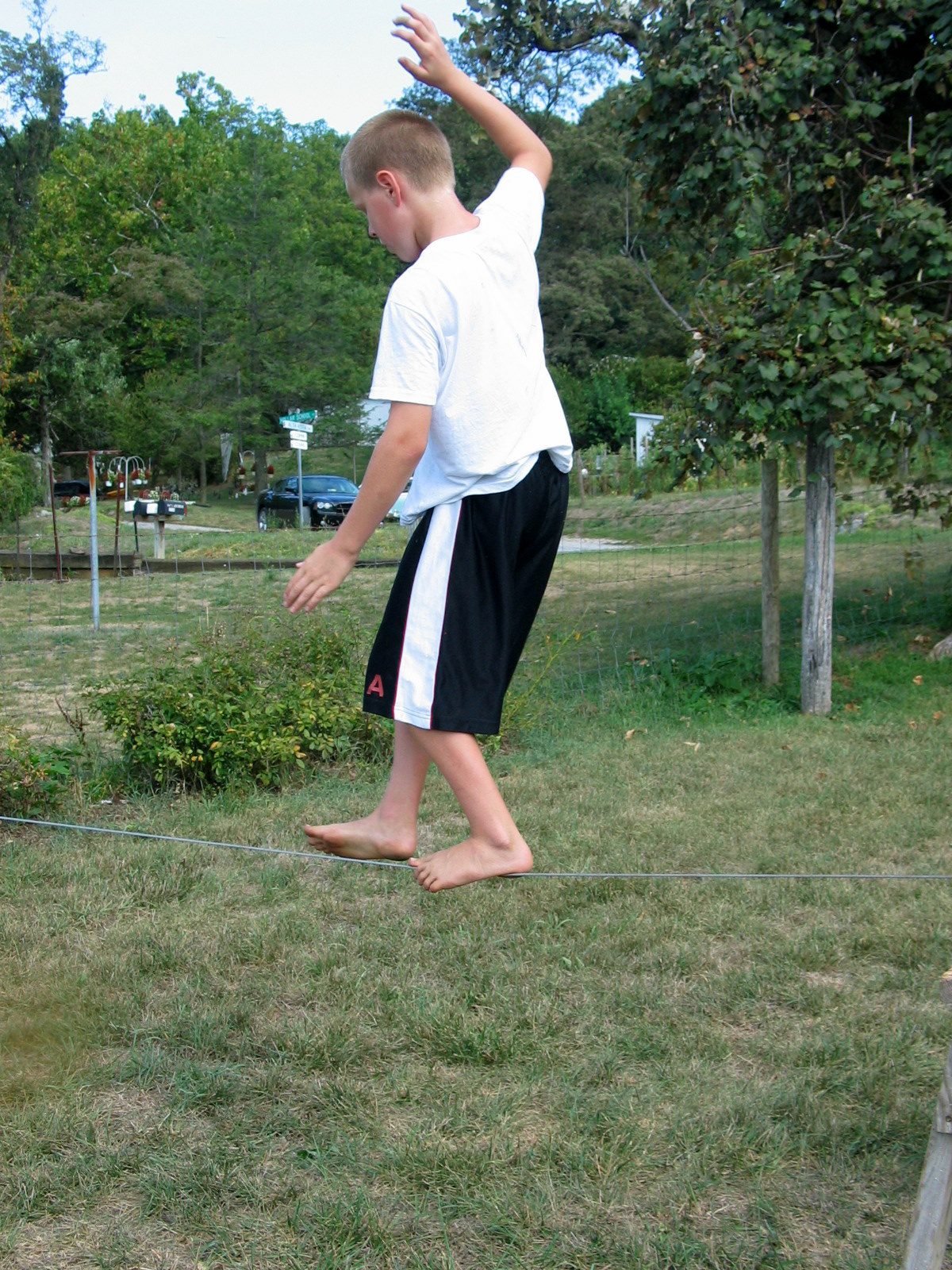 They got out Mr. Handsome’s come-alongs and rigged up their own tightrope.

I don’t even know how to use a come-along. 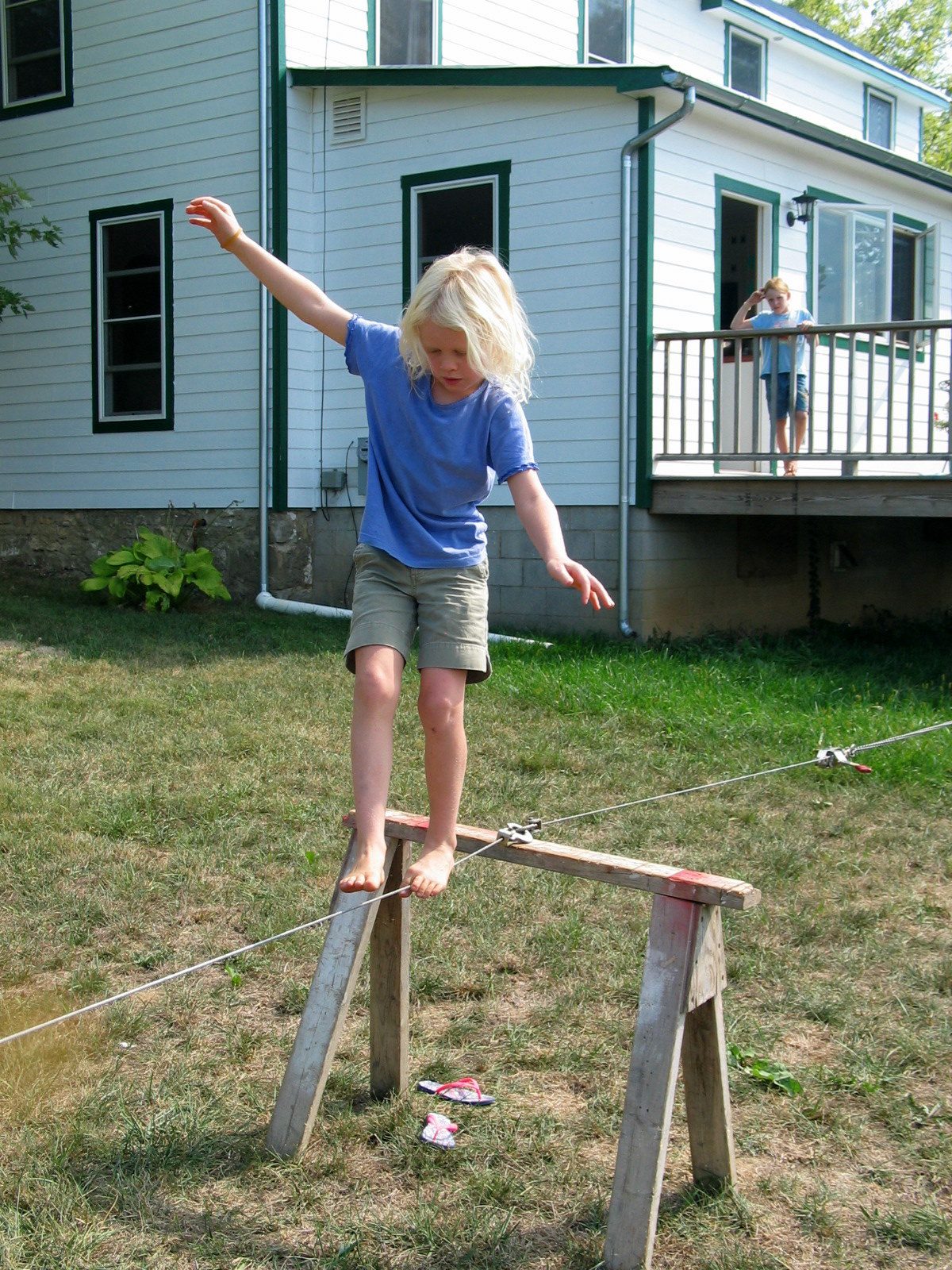 They took turns walking the wire. 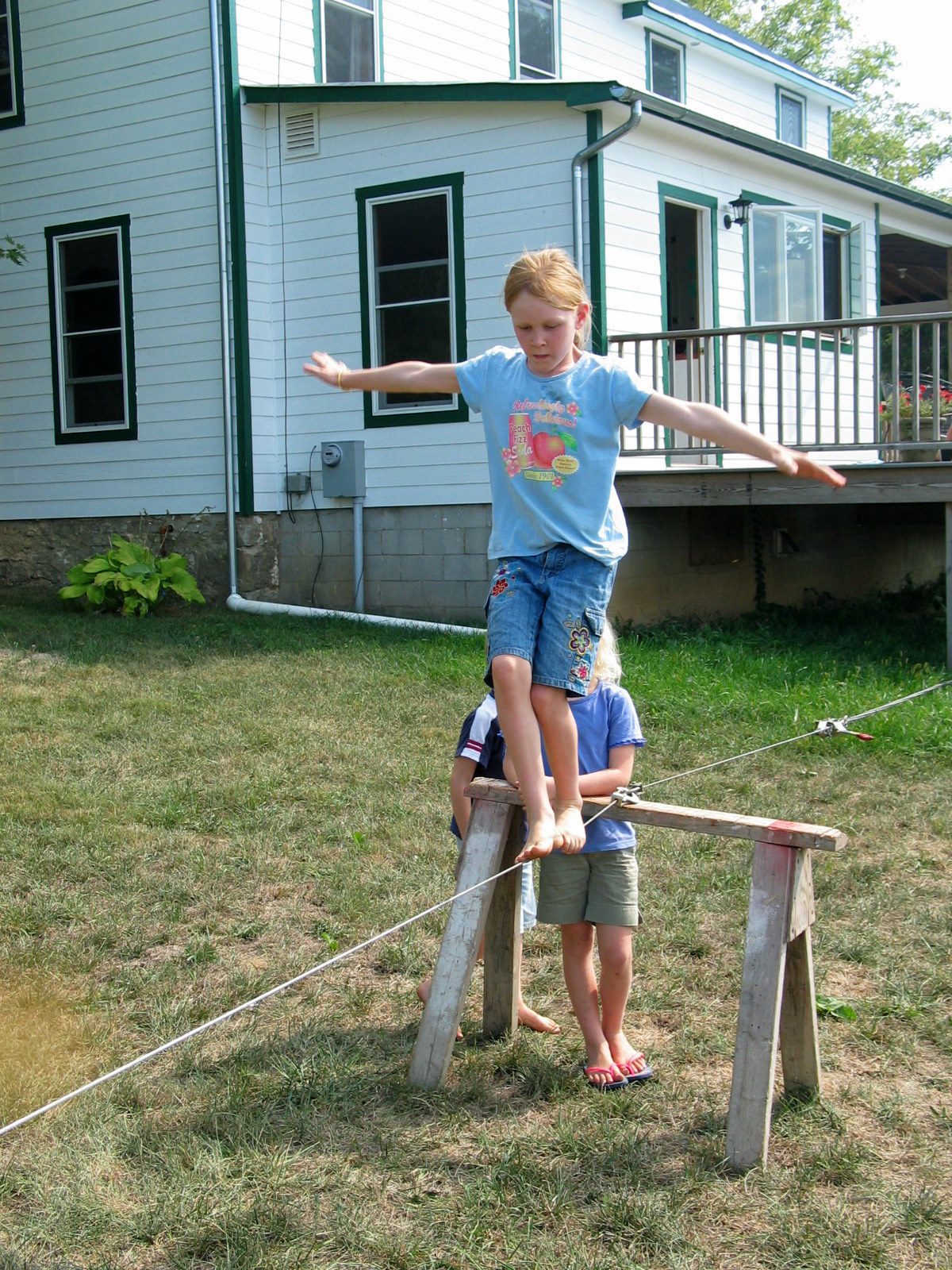 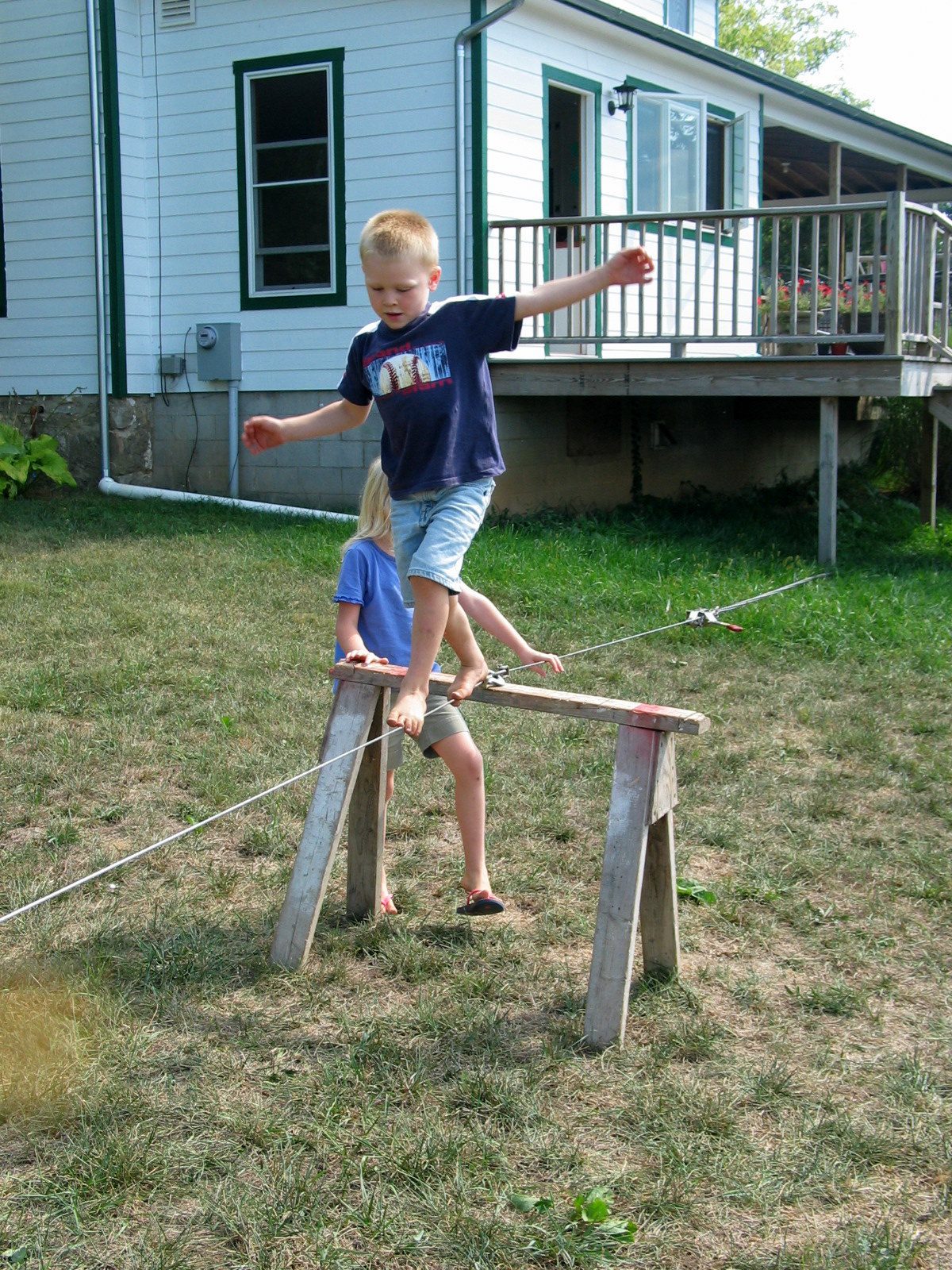 The Baby Nickel about castrated himself. He’s not been so lucky lately.

Then Yo-Yo and Miss Beccaboo built themselves a riff on a potato gun: an apple gun fueled by an air compressor. 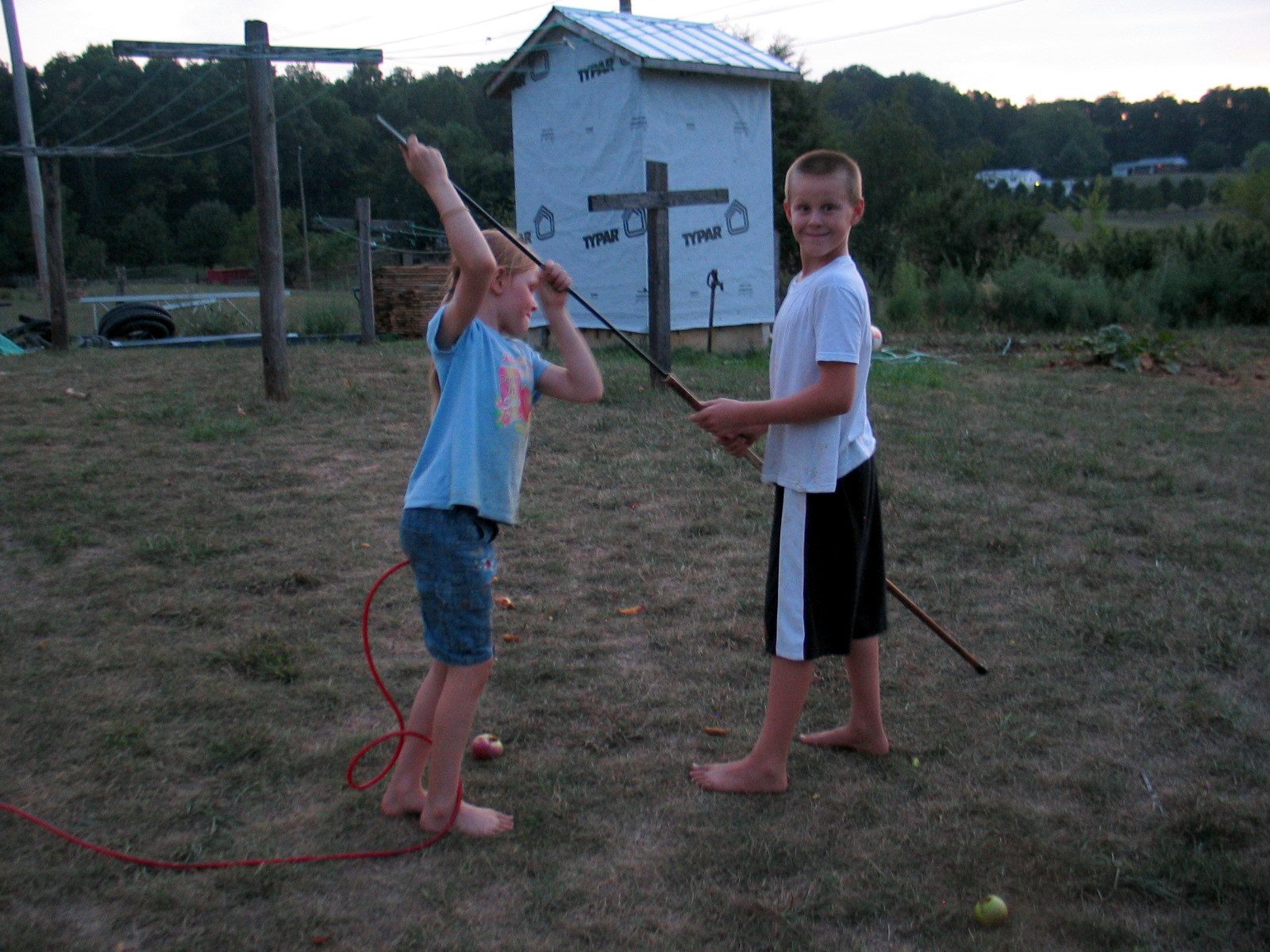 They’d jam a piece of copper pipe into an apple and then, using a smaller rod, they’d push the piece of apple that was now in the copper pipe farther in to the copper pipe, down towards the other end that they had semi-closed off with a flat washer and electrical tape. 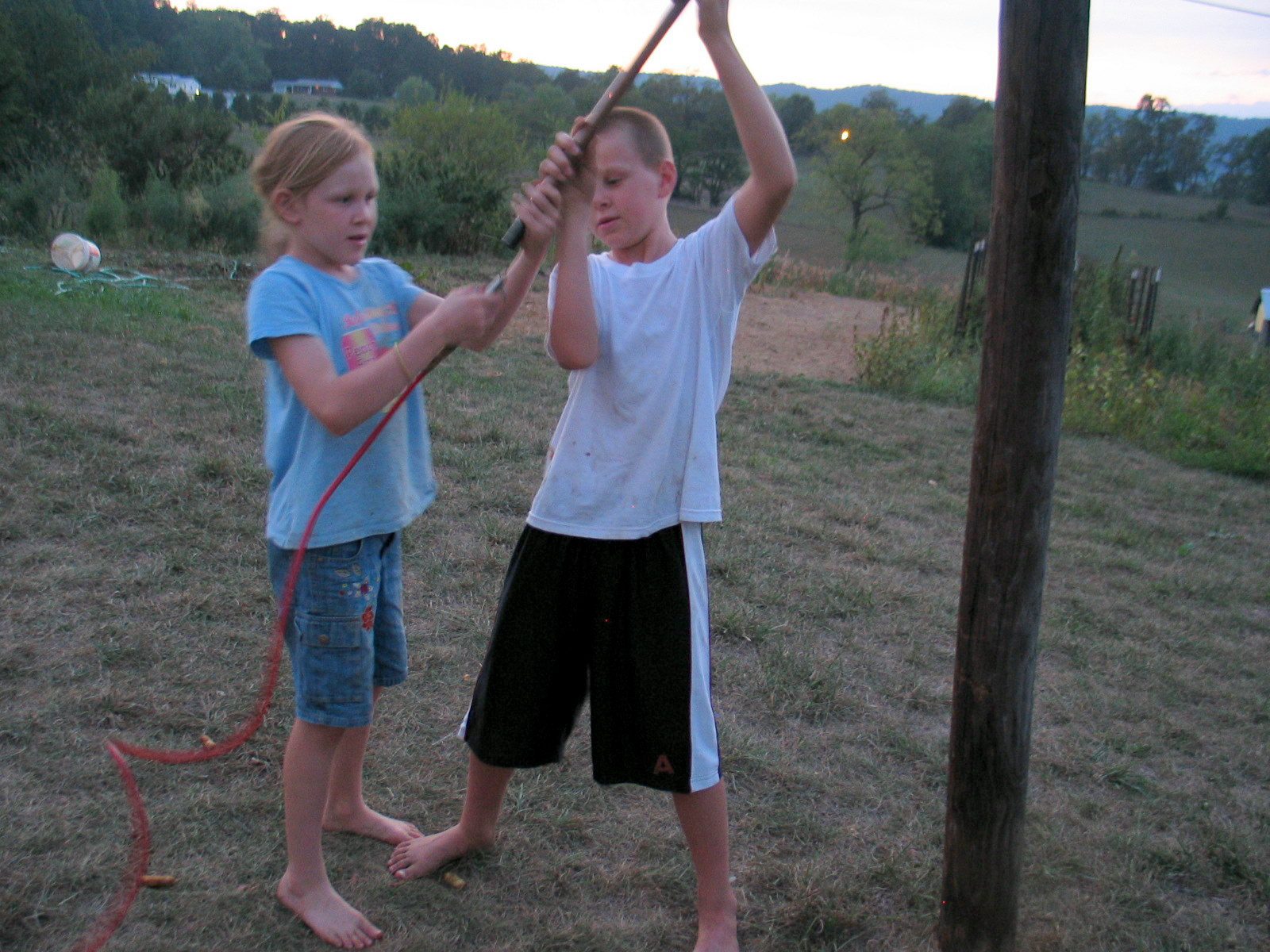 Then Yo-Yo would hold it steady (and aim away from the house, thank you very much) and Miss Beccaboo would stick the air compressor tube into the electrical tape-wrapped bottom end and let fly with a burst of compressed air and—wheeeeeeee! 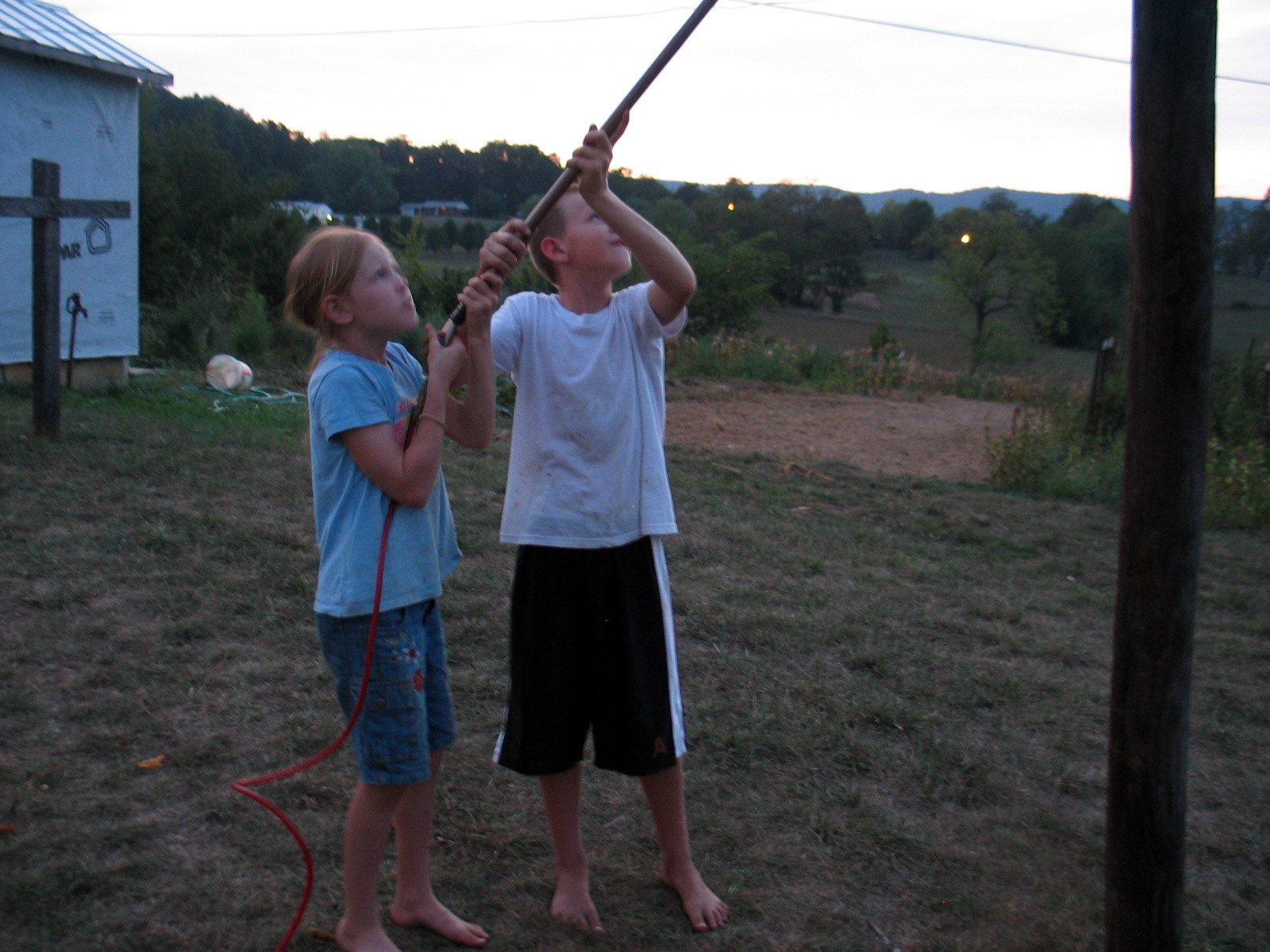 I learned how to dry pears. It’s so simple it isn’t funny. There is no coring or peeling involved. Basically, you just sit back in a chair, put your feet up, and wave a knife through the air and you’re done. Crazy simple. 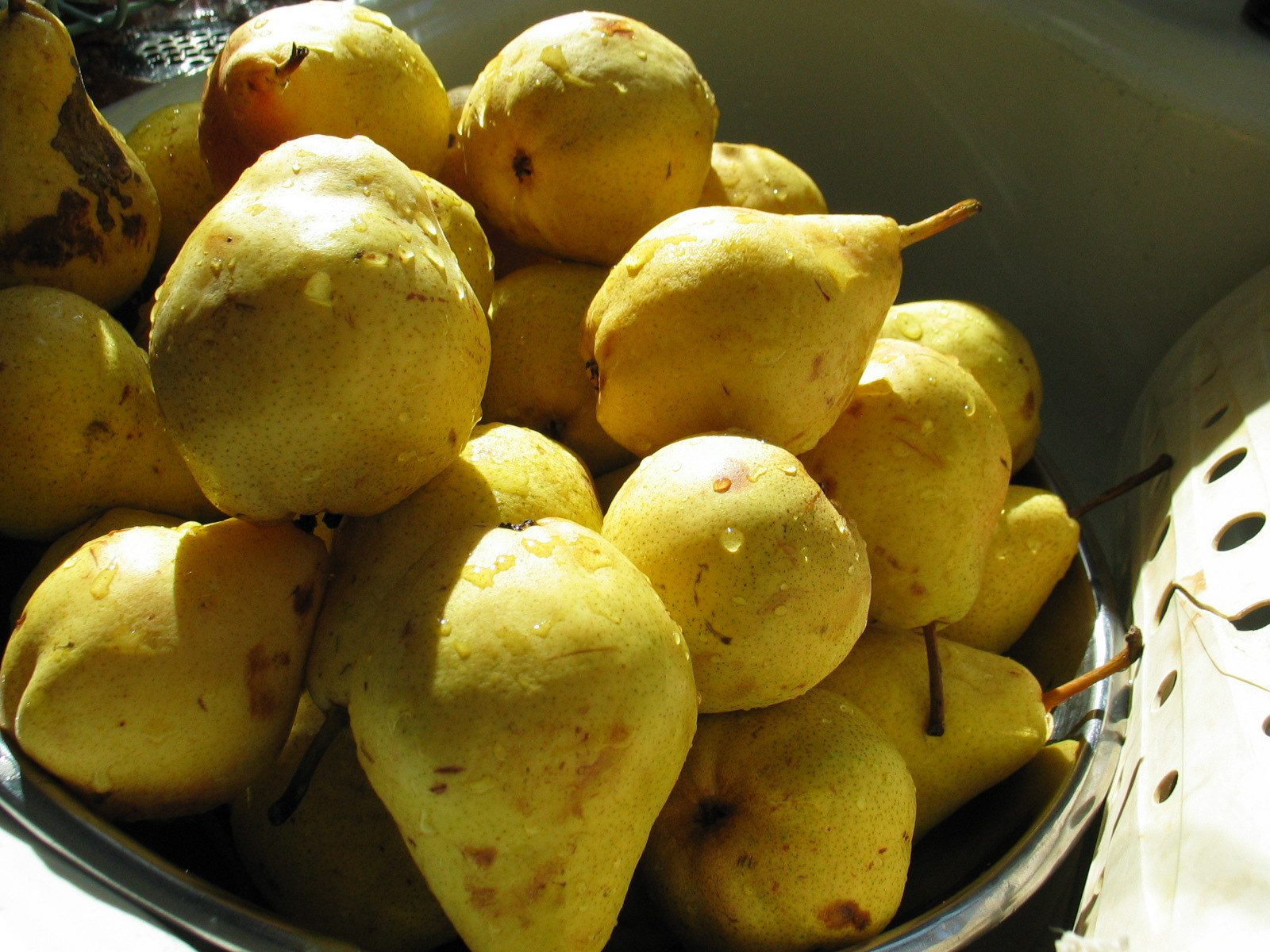 Okay, so there’s a little more to it than that.

Cut out the blossom end of the pear and any tough little knots. 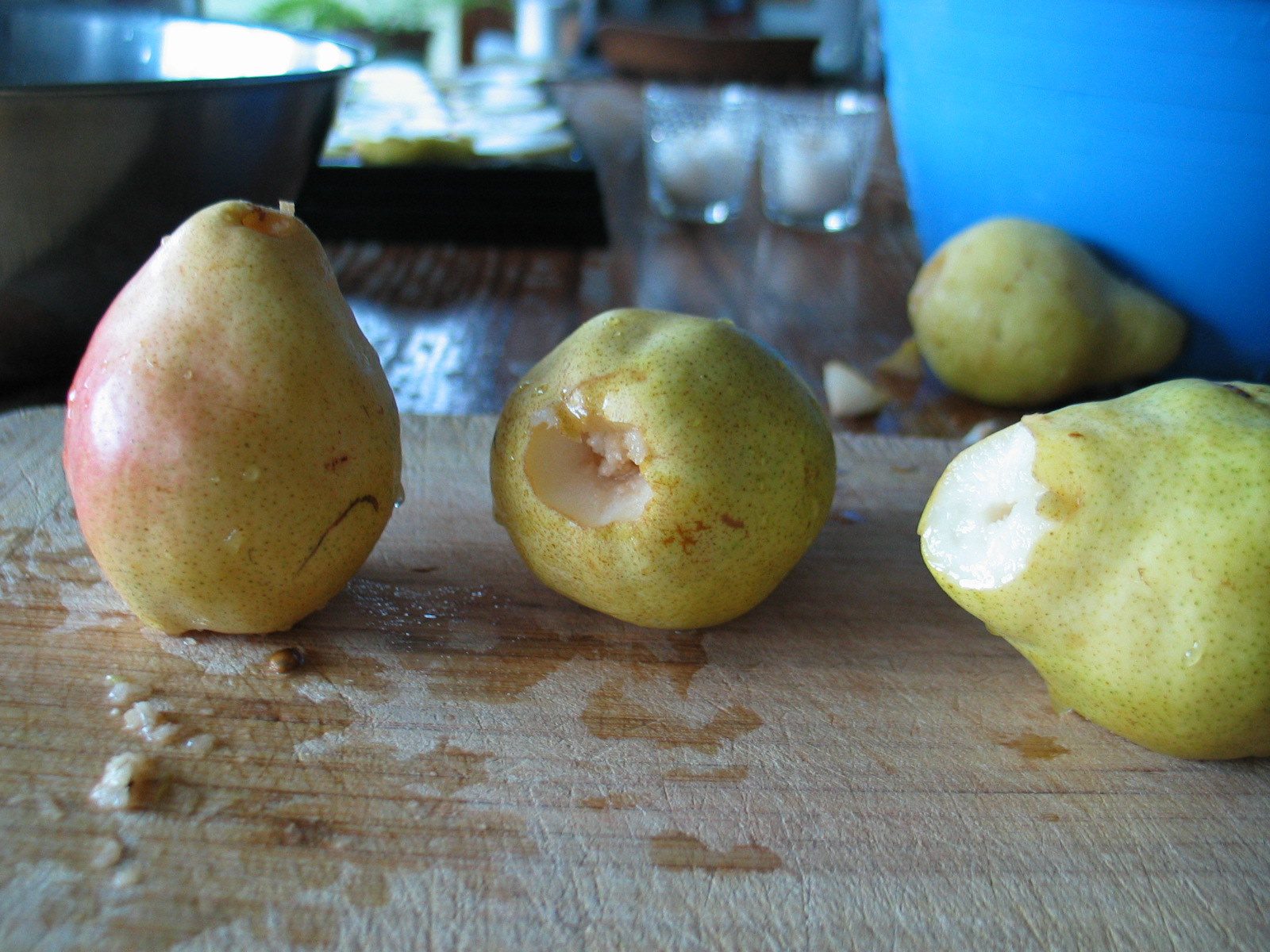 Pull off the stem. Slice the pear into quarter-inch thick slices, discarding the two little side cuts that are mostly all peel. 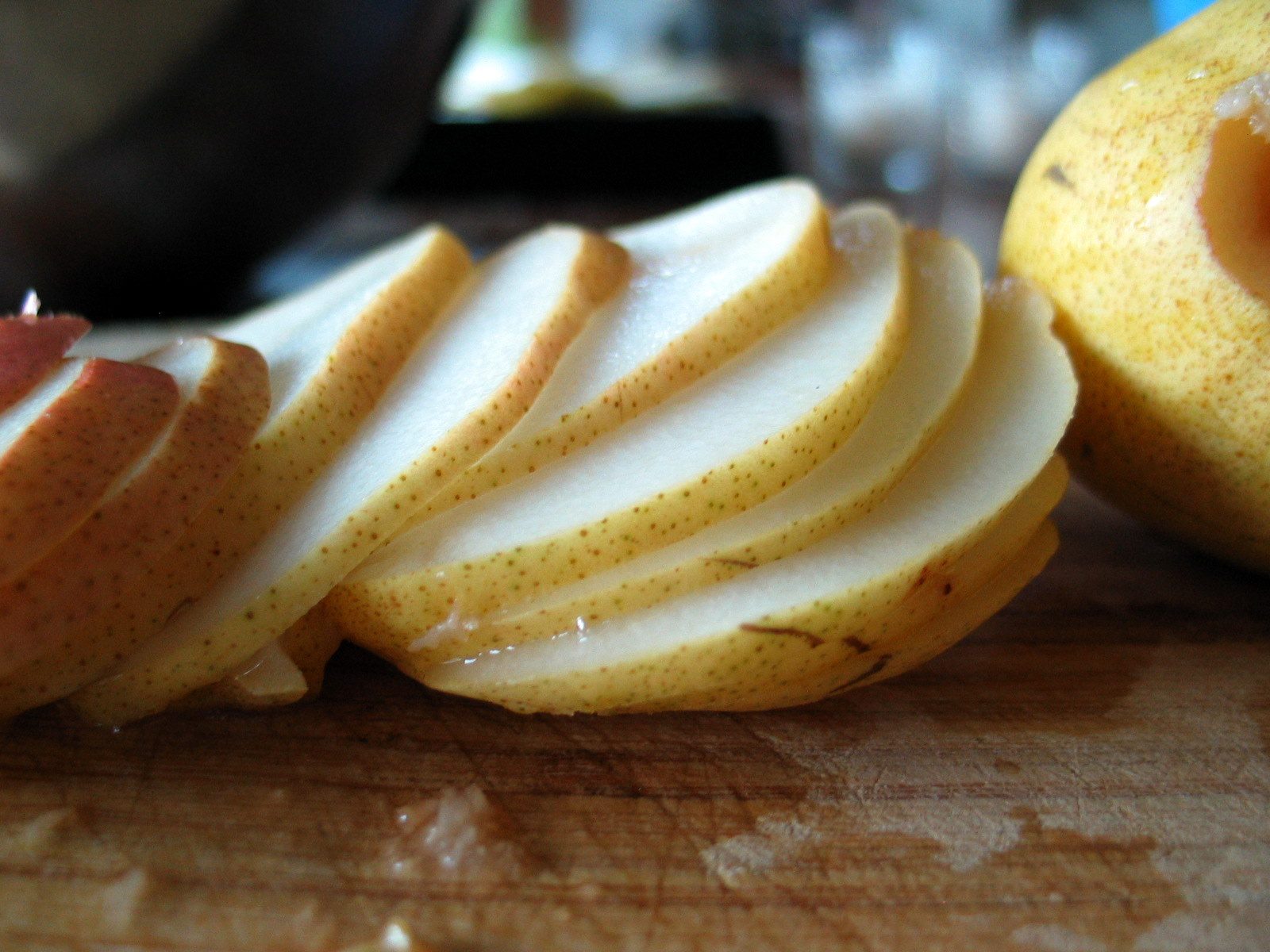 (Confession: I ate almost every single one and then wondered why my tummy felt funny.) 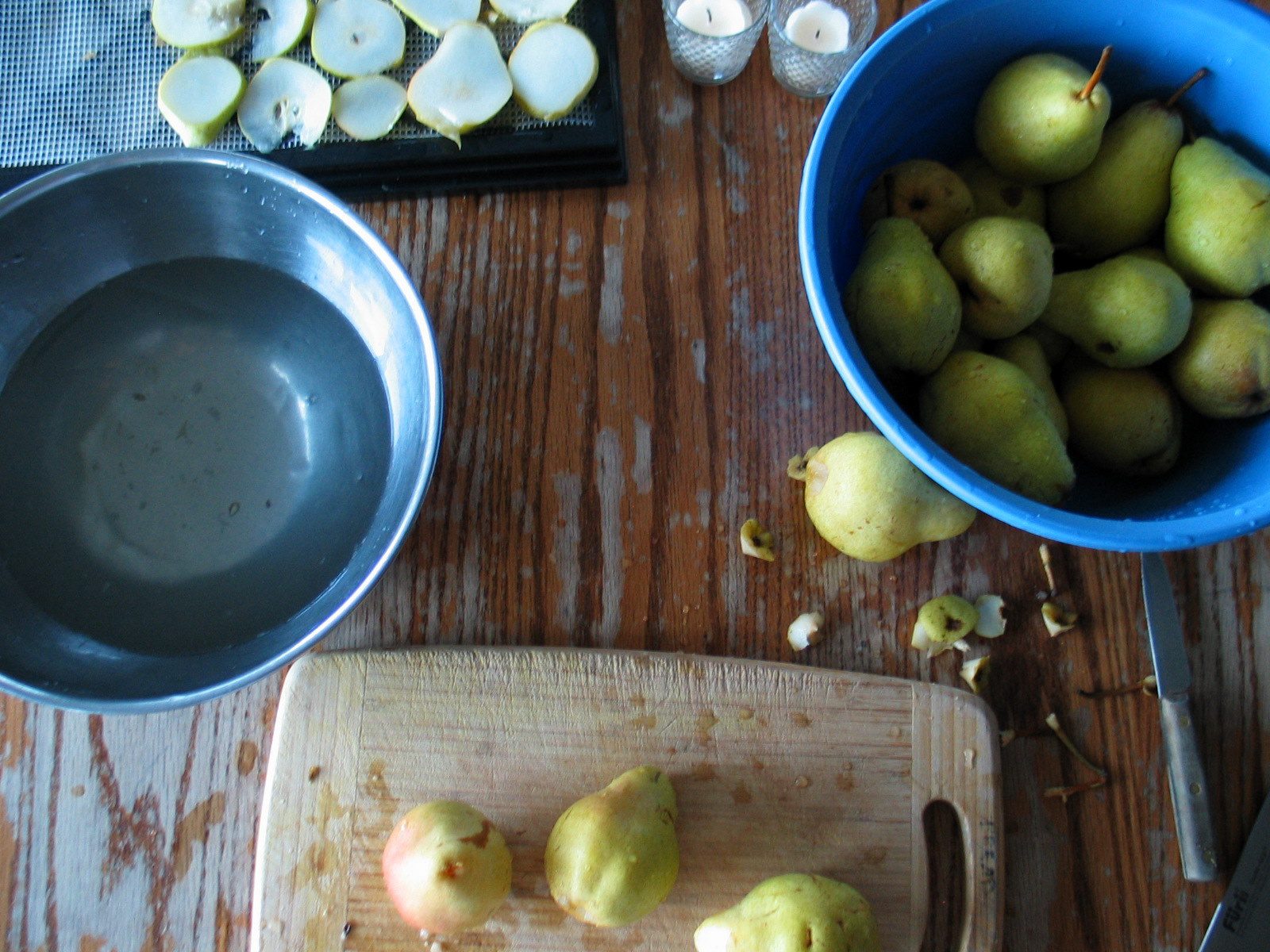 Dip the pear slices in lemon juice-laced water (4 cups cold water mixed with 2-3 tablespoons of lemon juice)* and lay them on your dehydrator trays. 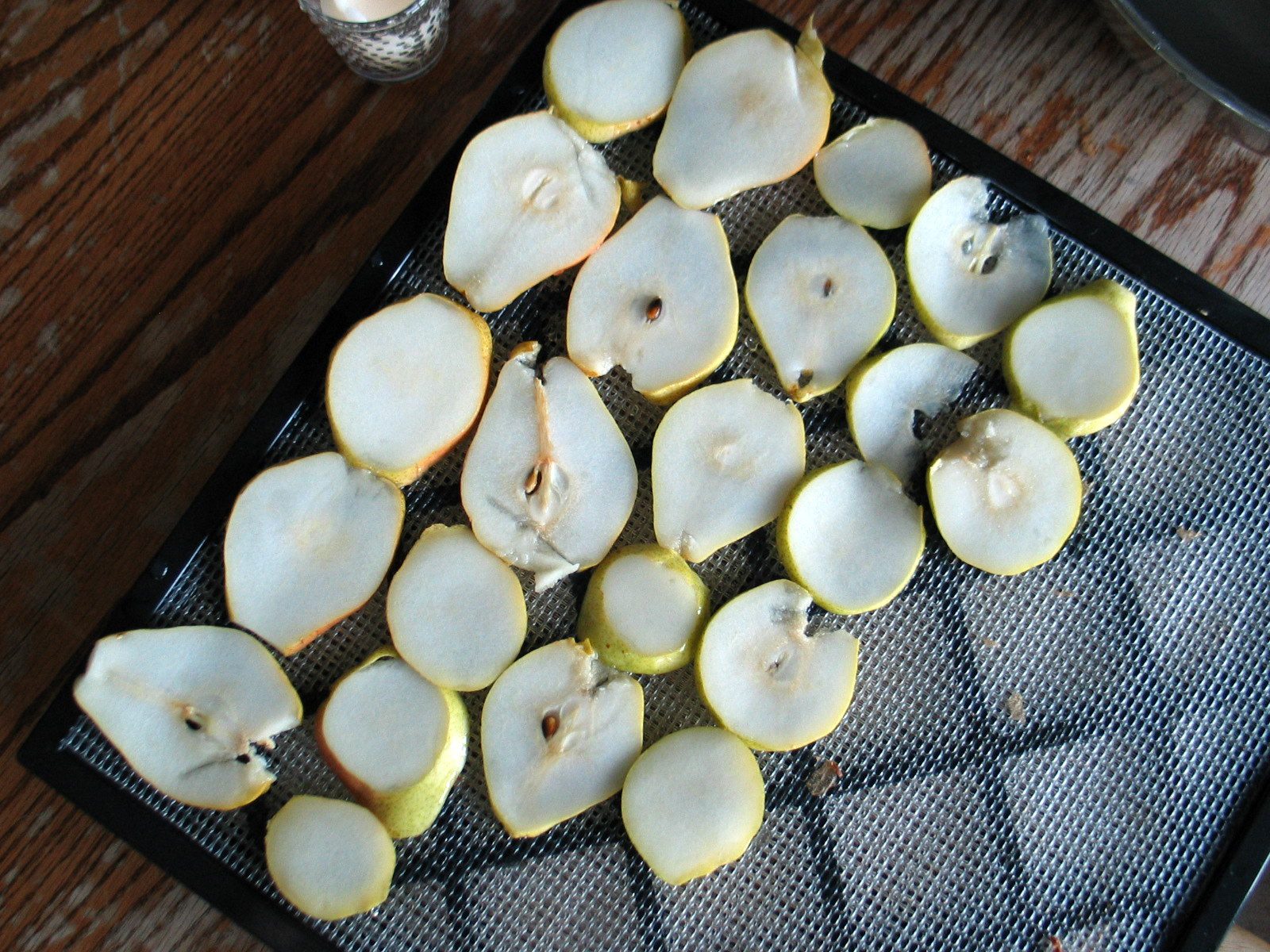 After about 8-12 hours at 135 degrees, you have yourself some lovely, chewy pear slices. (Either pop the seeds out, or eat them. I eat them and they’re so unobtrusive that I don’t even notice I’m doing it.) 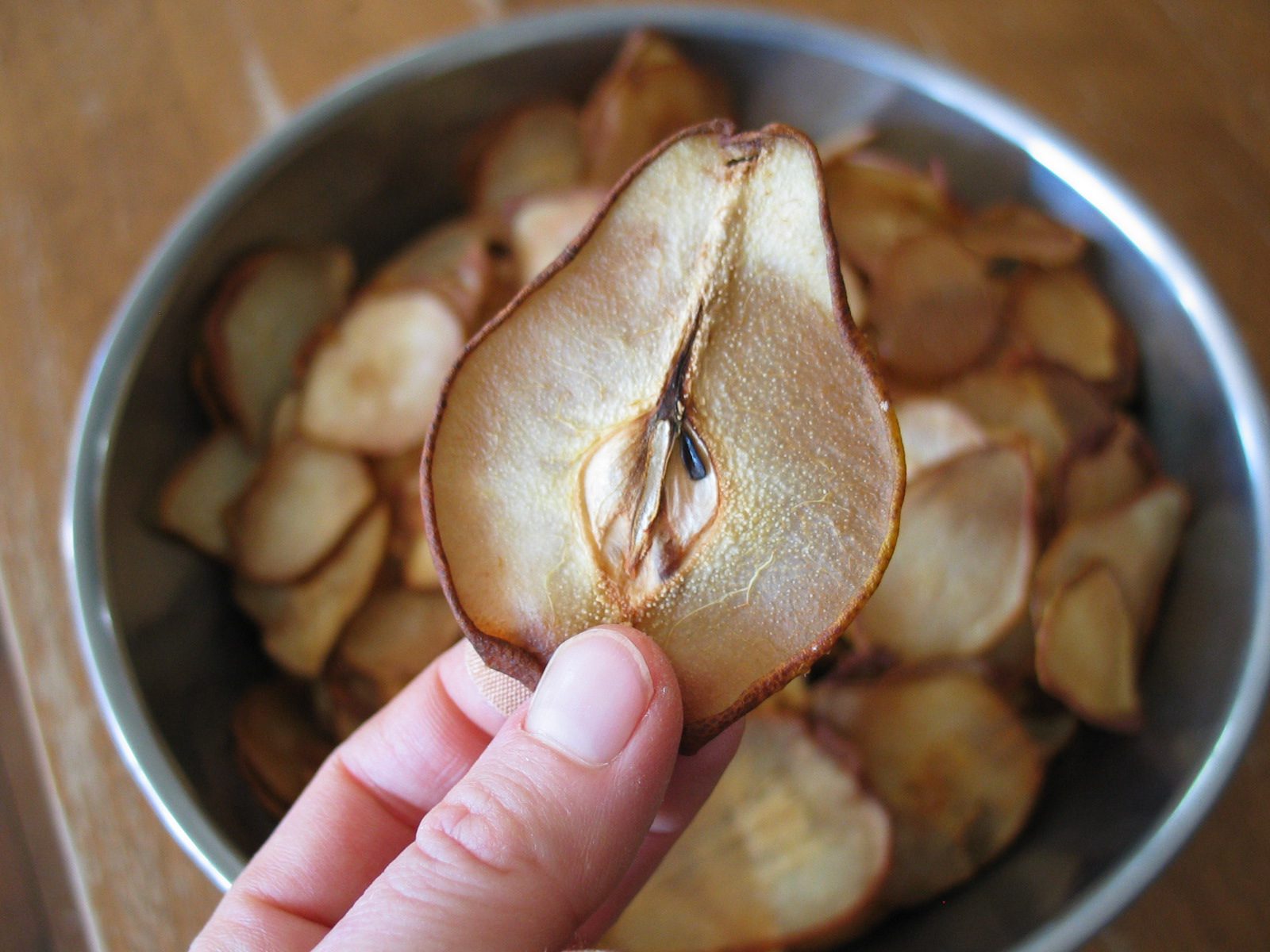 Oops, that one went by so fast I couldn’t catch it. Guess I’ll call it quits.

*This just in: Mr. Handsome conducted an experiment and left one rack of pear slices undipped. He reports that they were no different than the dipped variety. Yee-haw!

This same time, years previous: on being green