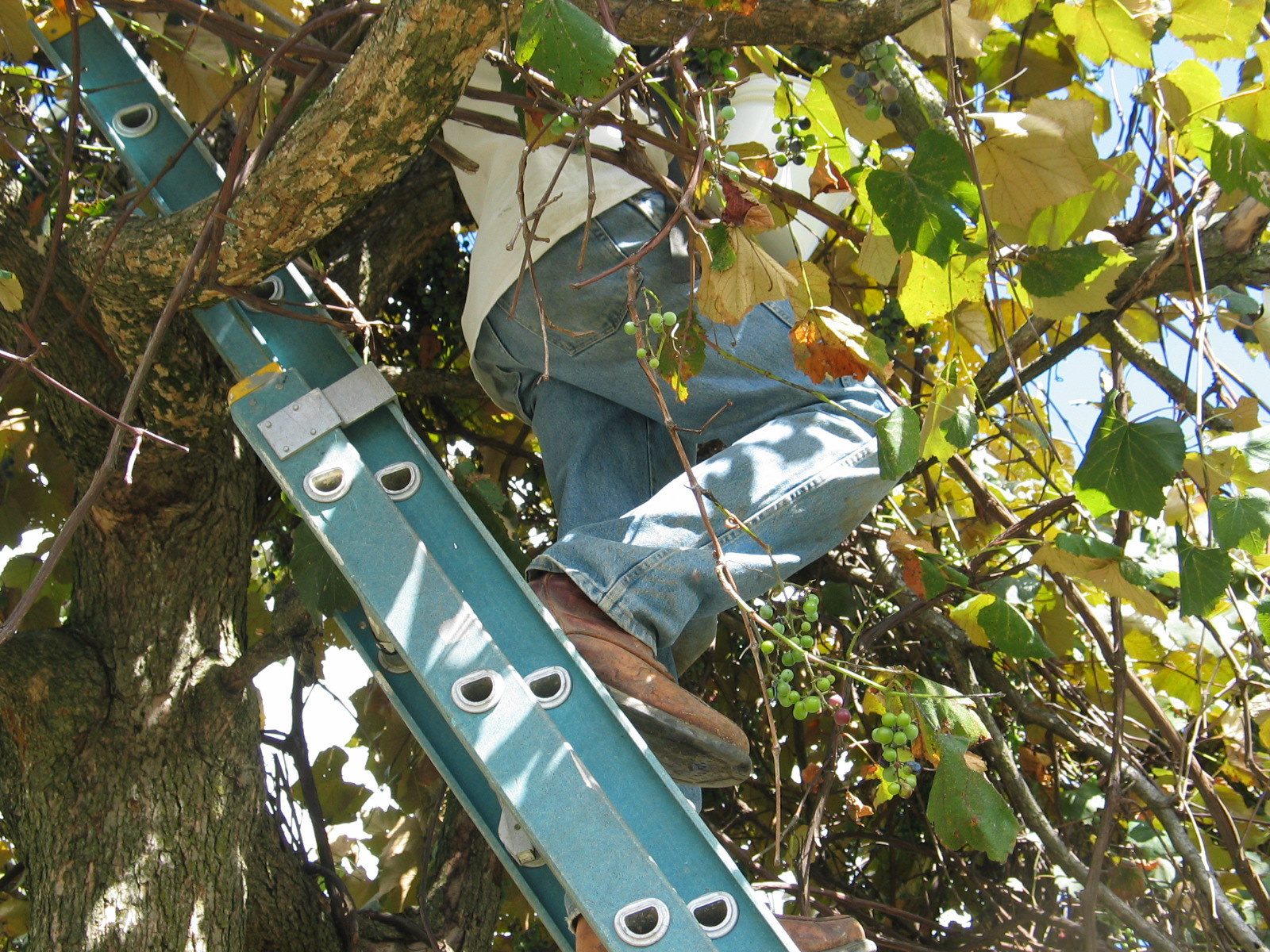 Saturday was a semi-traumatic day for my family.

1. I chopped my finger instead of the garlic.
2. The Baby Nickel got stung by a wasp. (We think that’s what it was, anyway.)
3. I deadheaded my finger while deadheading the flowers.
4. A tree branch fell on Mr. Handsome’s head.
5. Miss Beccaboo stepped on two nails simultaneously.
6. The Baby Nickel smashed his thumb with a hammer.

There were tears, band-aids, blood, ice, globs of neosporin, loud yells, and a few choice words.

We all marveled at the collective mess we had become. As Miss Beccaboo dug in the cupboard for the box of band-aids to dress yet another one of my wounds, she said, “I think I should put band-aids on all of your fingers, Mama.”

But it was a productive day, too.

And here’s his worker-man head, all up in the clouds. 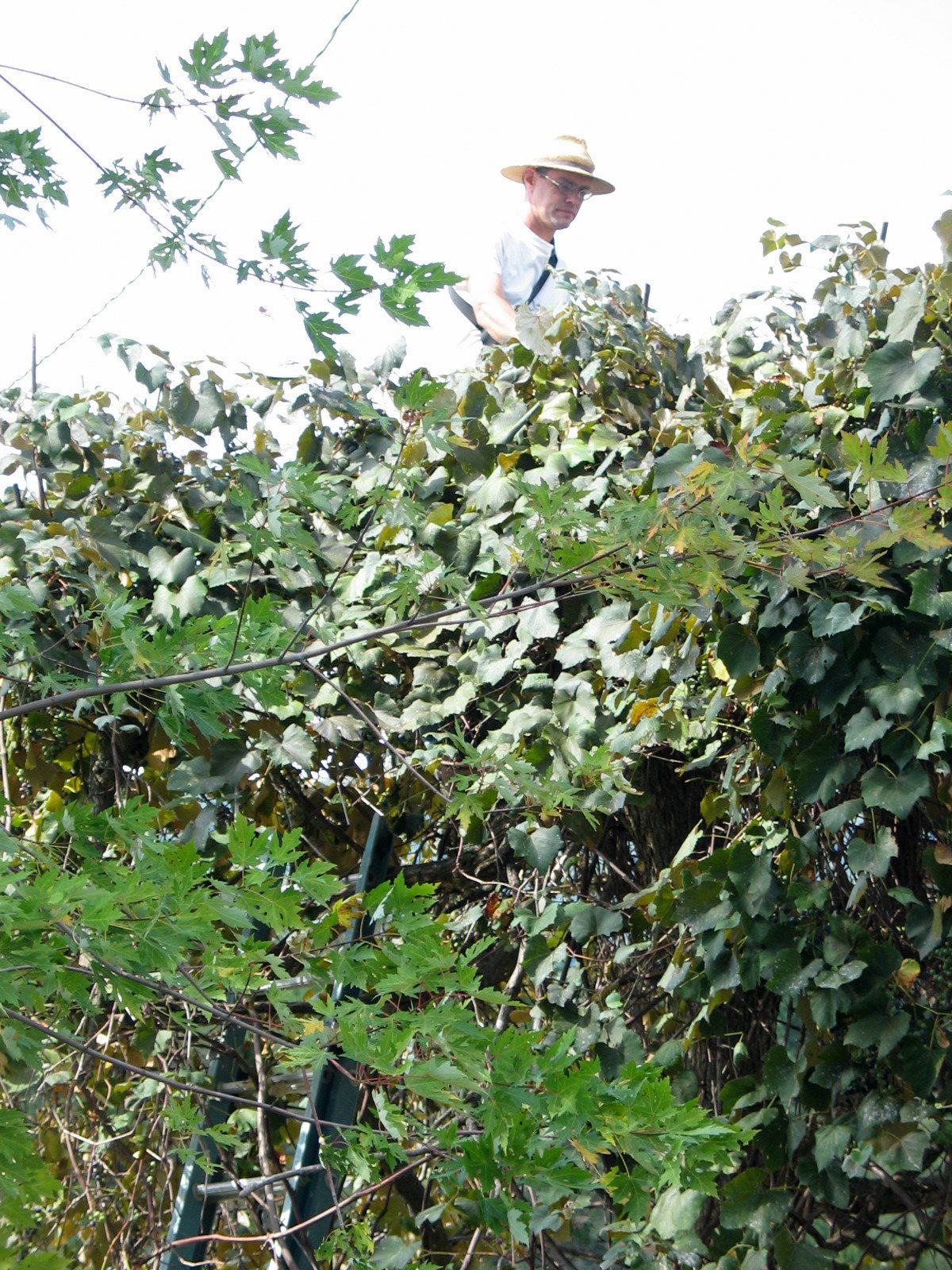 You can’t tell from here, but he was super grumpy about picking grapes. He’s like this every year, so I don’t pay him any mind.

This little guy, on the other hand, loves picking grapes. 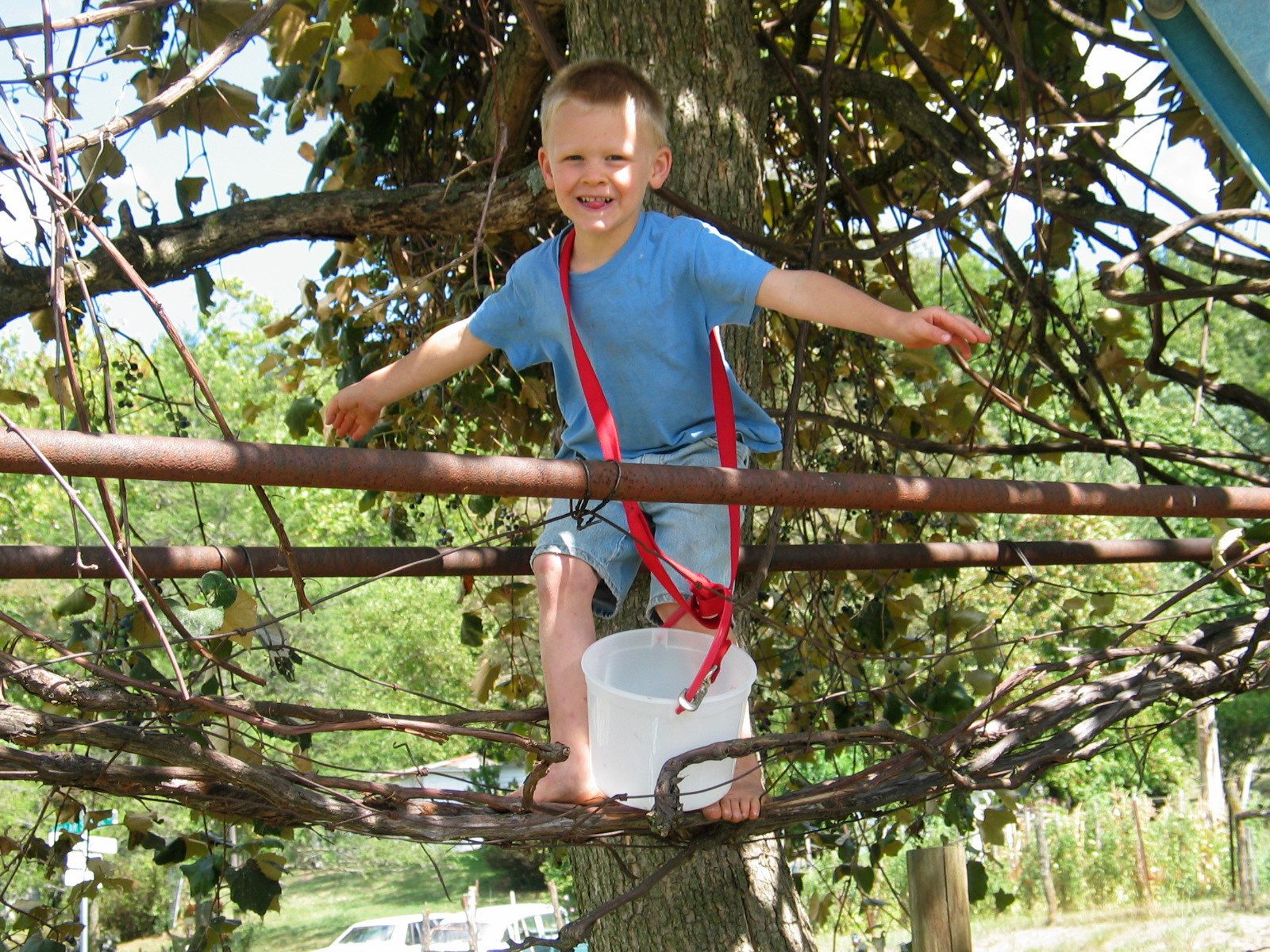 He shimmies right up into the arbor and hops around like a little monkey. 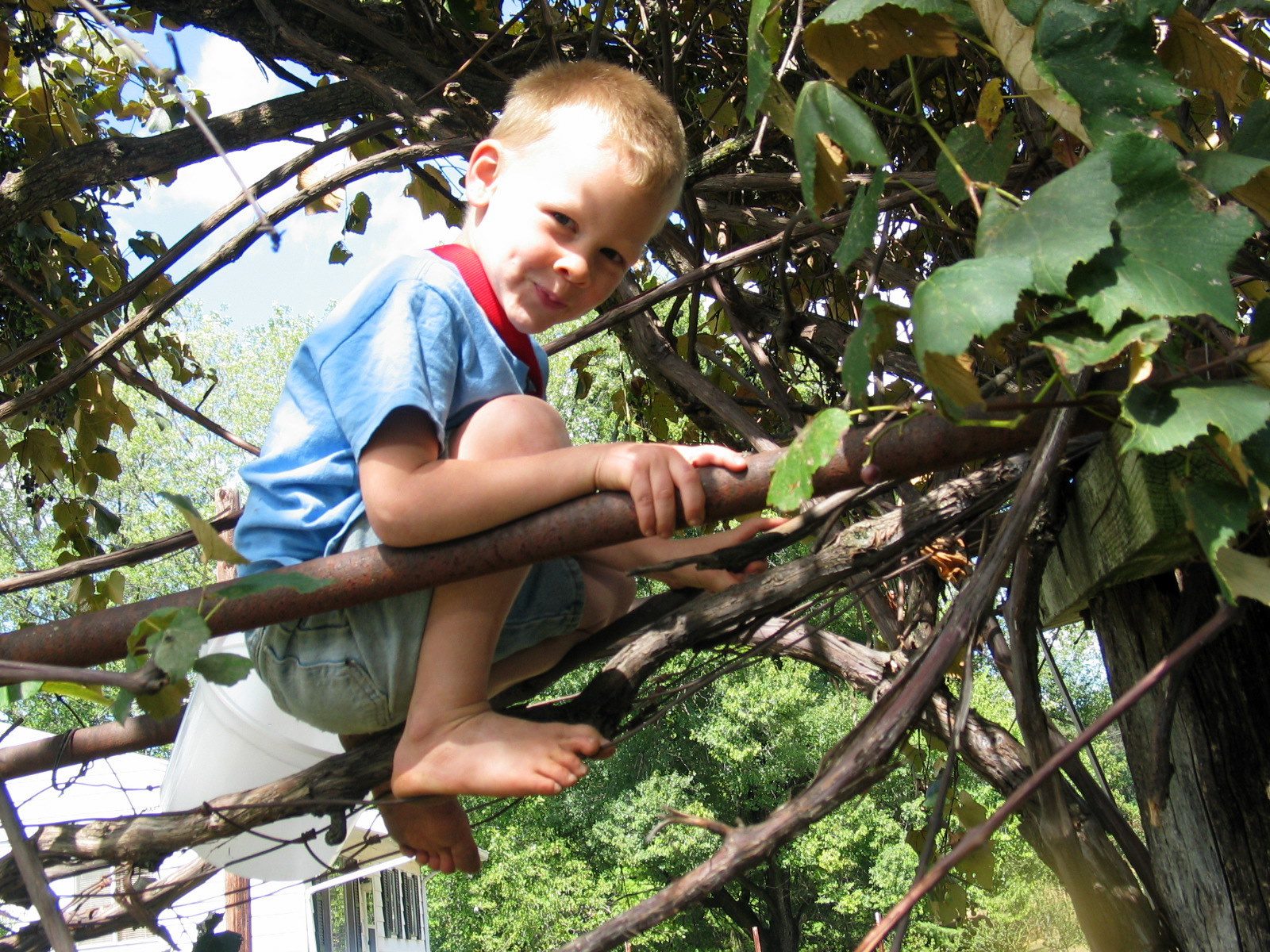 Considering our track record, I was fully prepared for someone to fall off the ladder and was rather surprised when no one did.

2. Snoozes were taken. (He was gearing up for the dread grape-picking job.) 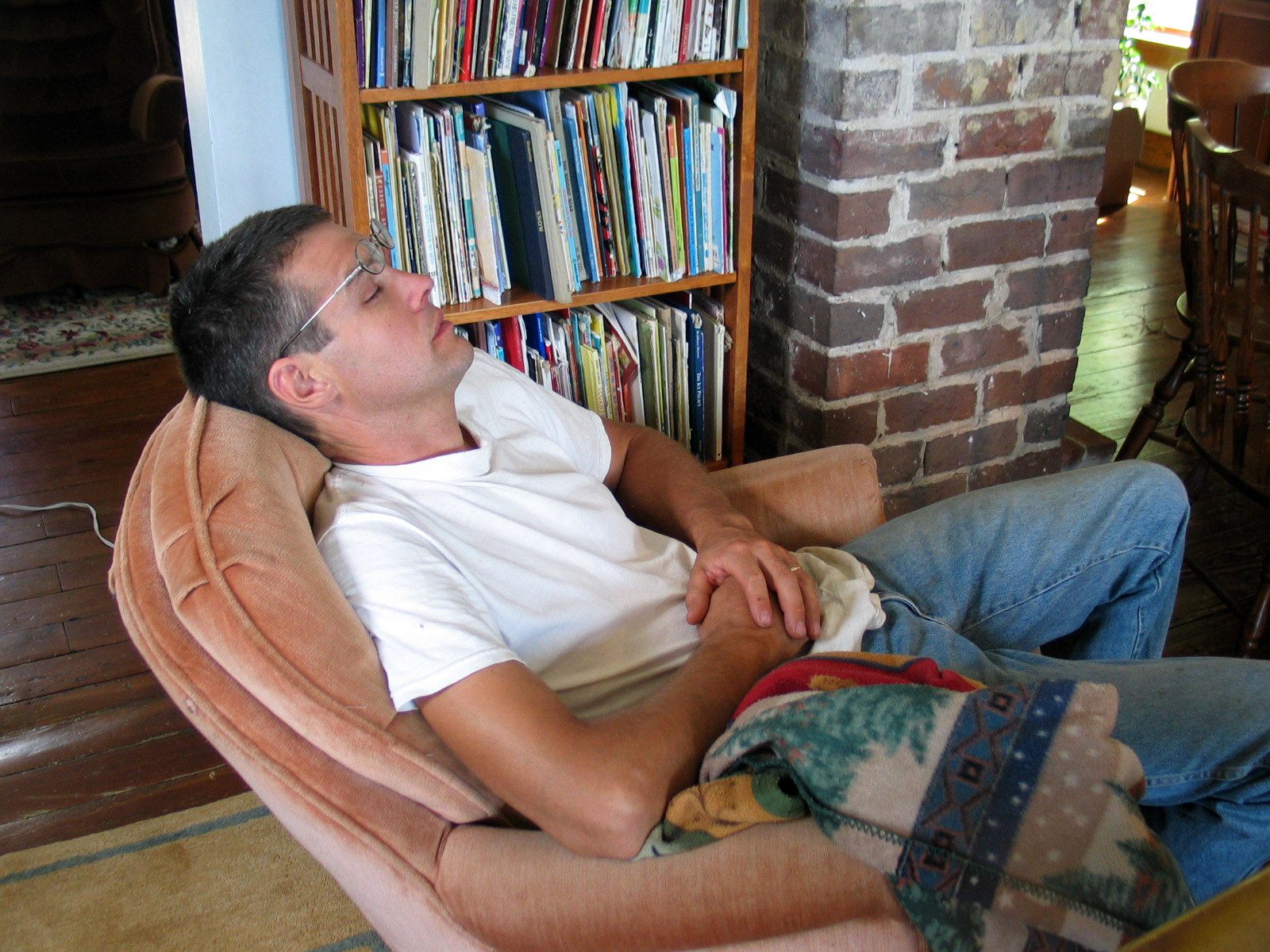 3. Lawnmower lessons were given and taken. 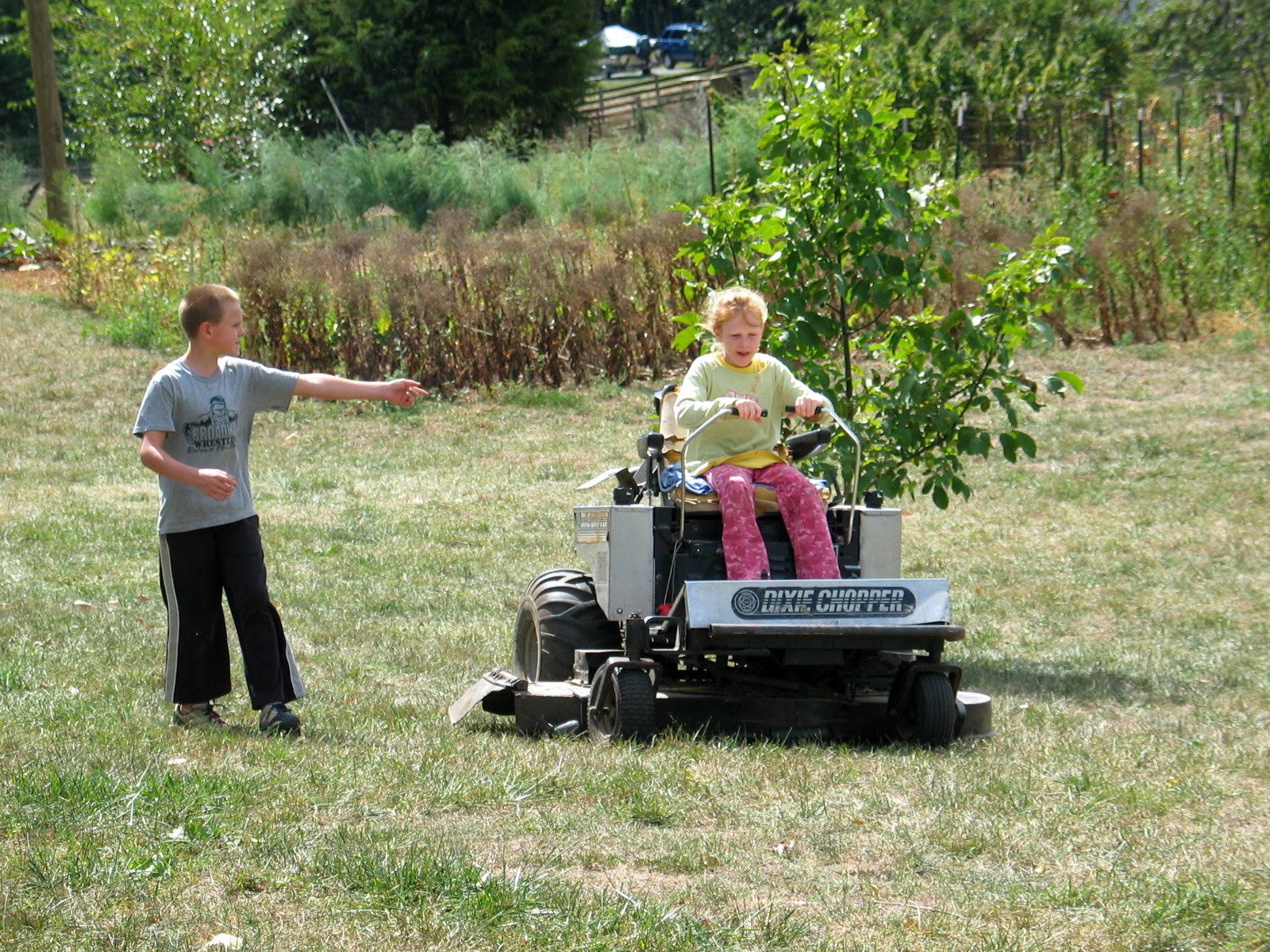 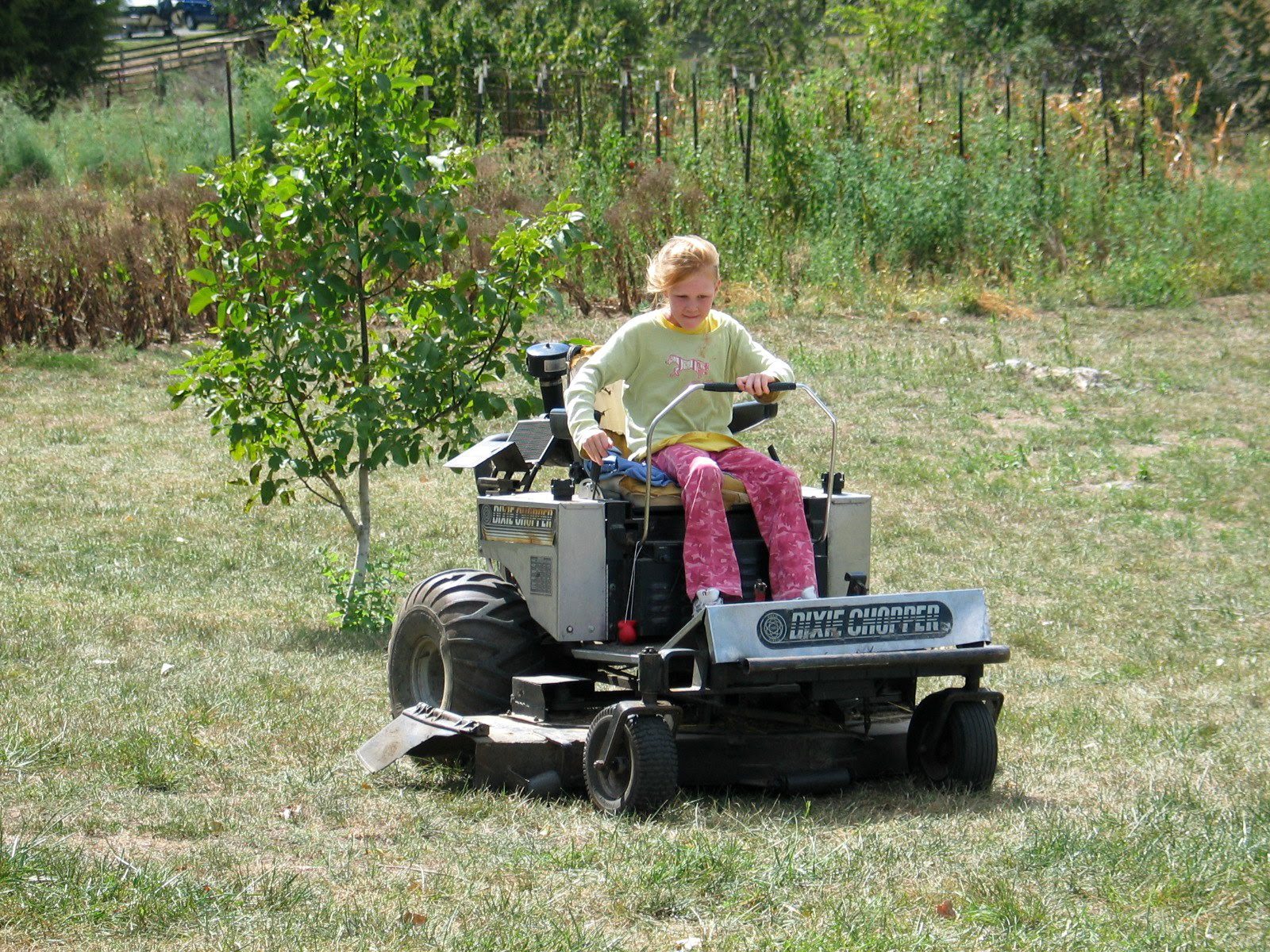 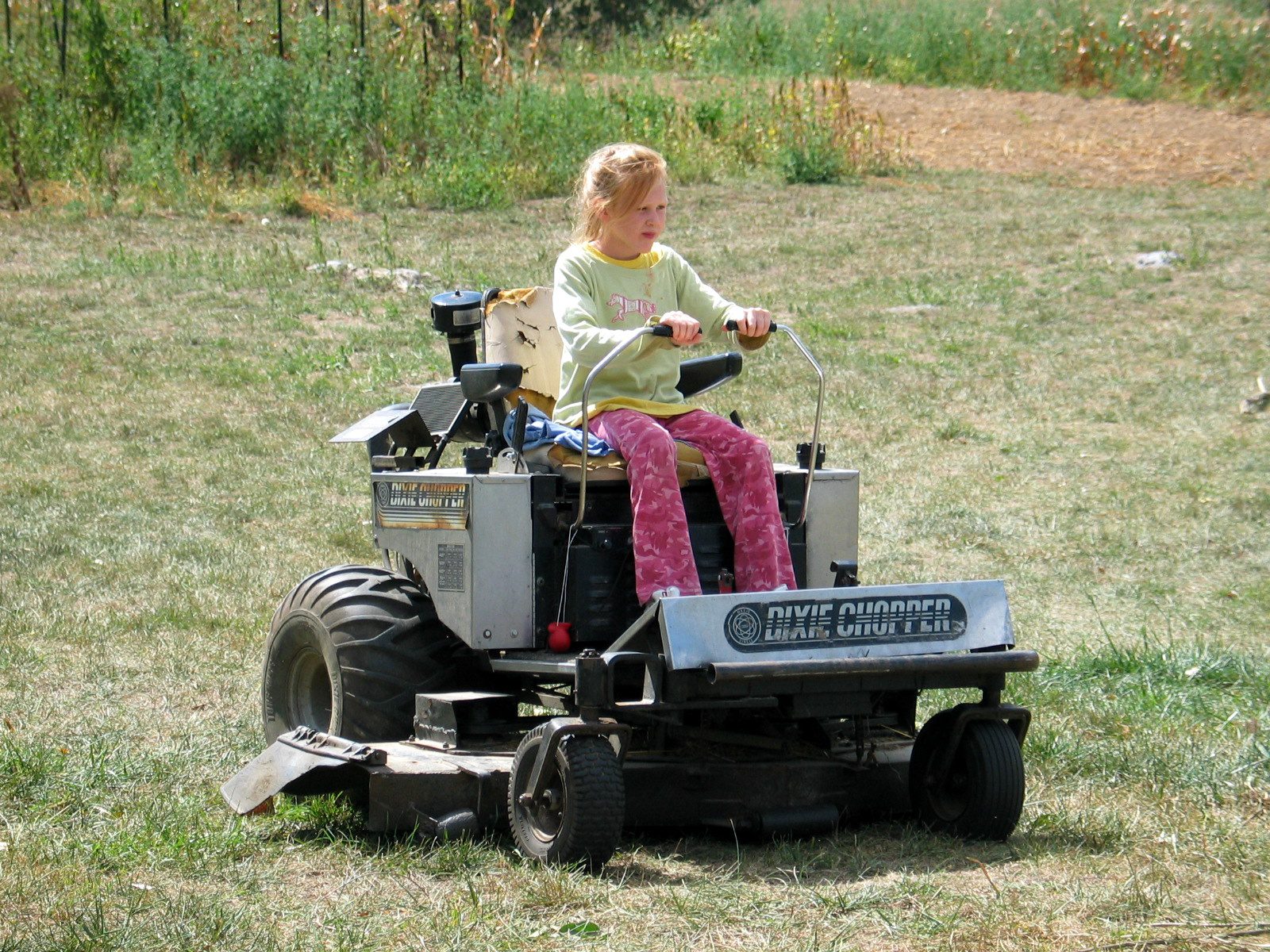 4. And fruit-on-the-bottom baked oatmeal was discovered. 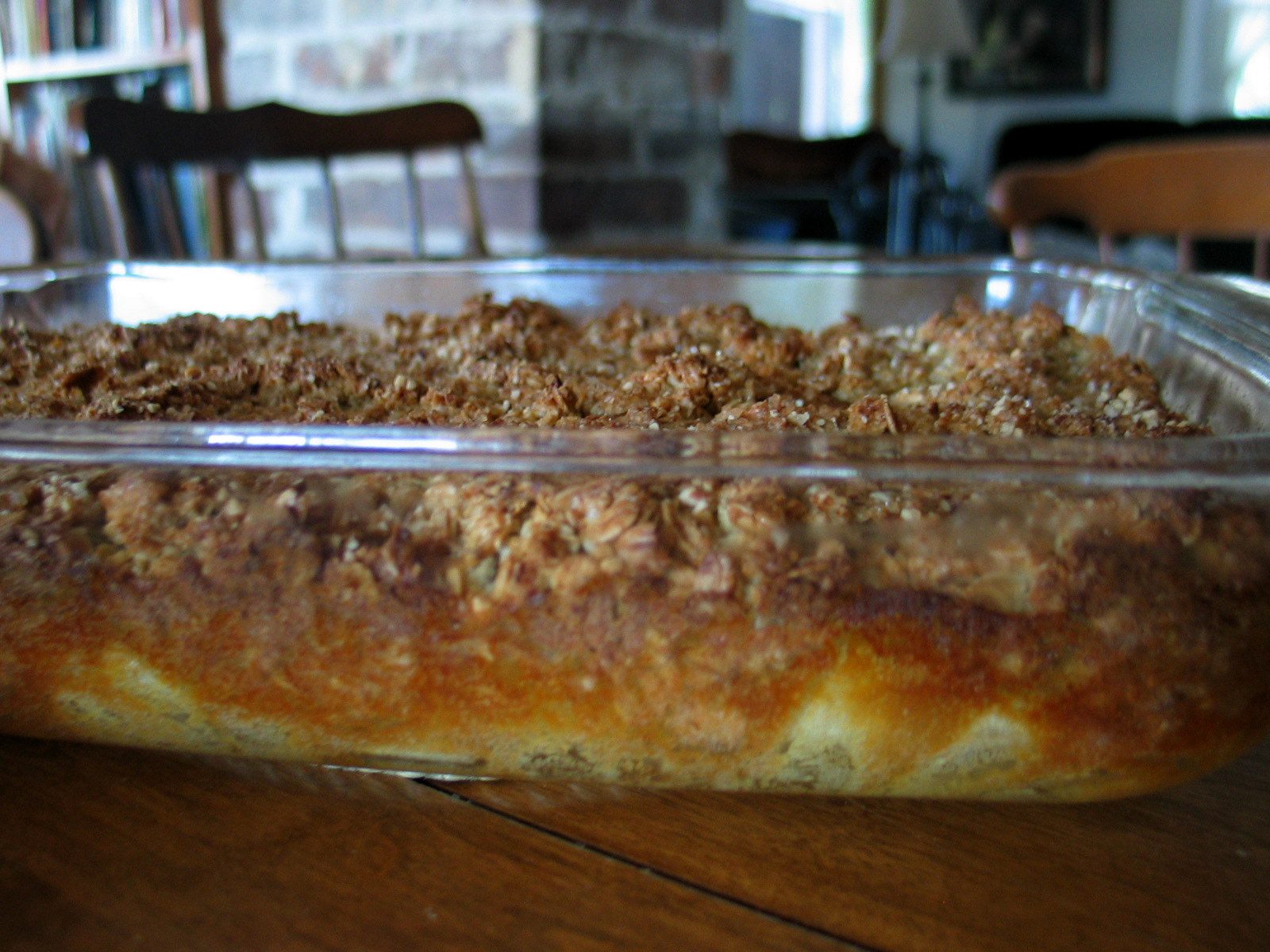 I read about the concept on Tasty Kitchen and less than twelve hours later I was pulling a pan of fruit-on-the-bottom baked oatmeal out of the oven. It smelled heavenly.

The kids, upon discovering that I had messed with the standard fare, set up a-moaning and a-wailing to beat the band. Yo-Yo was the loudest, but he shut up as soon as he tasted it, had seconds, and was disappointed when it was all gone.

It’s more a formula than a recipe: toss a bunch of fruit (I used fresh pears) with a bit of sugar (I used both white and brown) and cinnamon, scatter it over the bottom of your greased baking dish, and top with your favorite baked oatmeal recipe. I had a couple tablespoons of ground almonds left over from my twittering tarts, so I tossed them on top the oatmeal batter along with a sprinkling of demerara sugar for added crunch—delicious. 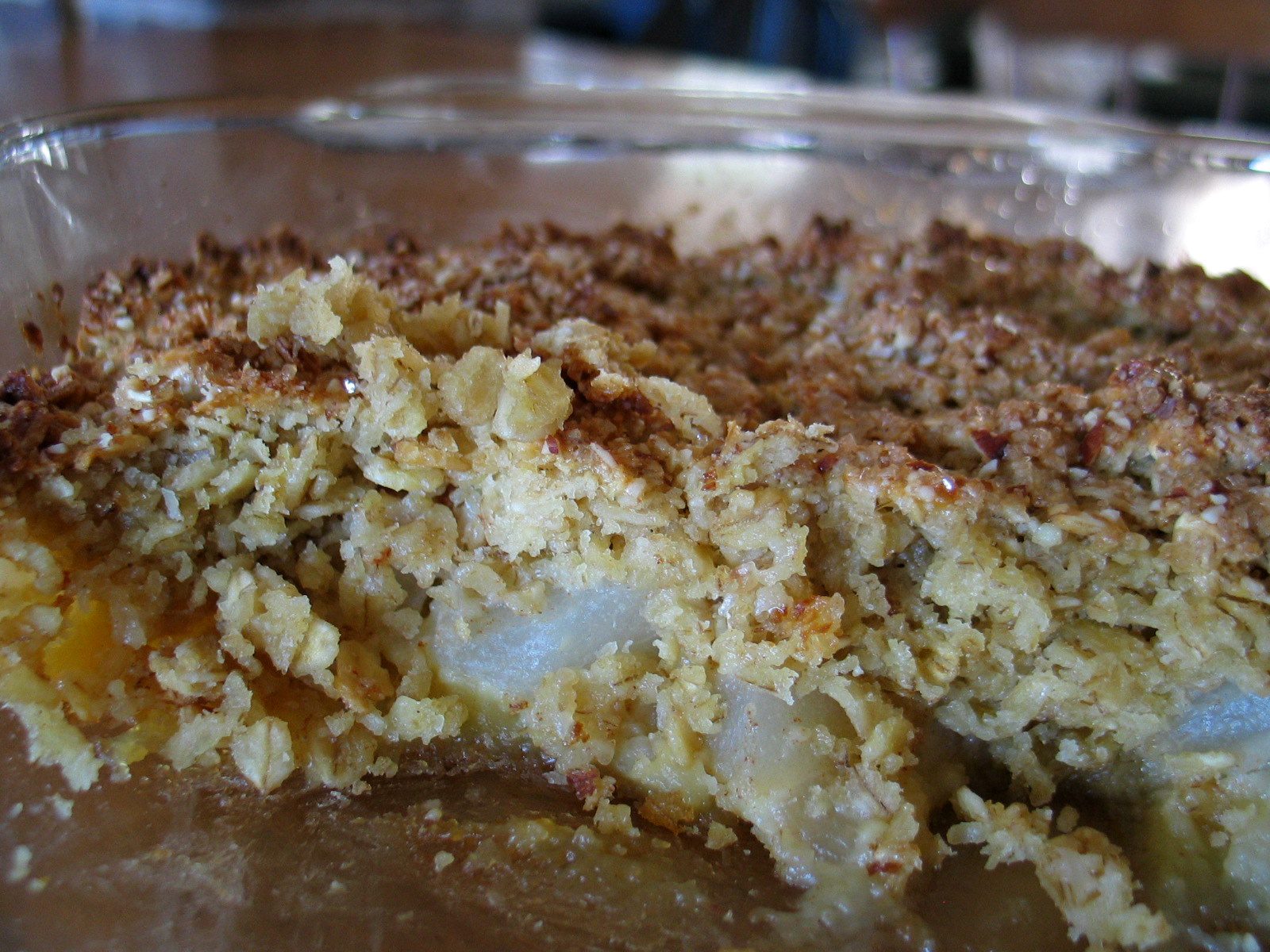 It’s a wonderfully delectable and hearty breakfast. And the best part is that it’s fortifying enough to get you through whatever the day might bring. 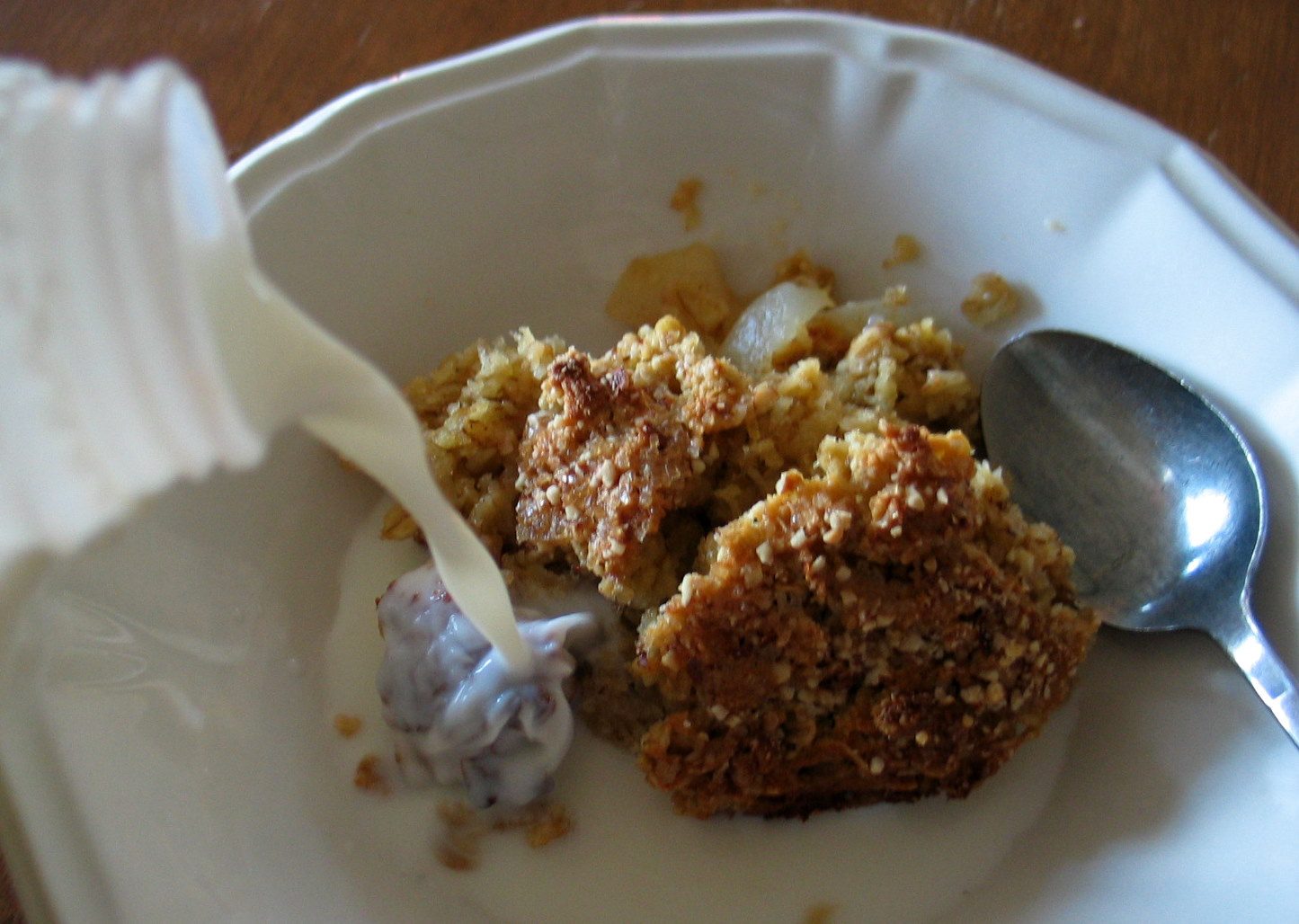 I used about six pears for this recipe, but I imagine peaches, nectarines, apricots, apples, and/or plums would be delicious, too. No doubt nuts and dried fruits would make a tasty addition, as well. The bottom (ha! a pun!) line? Do whatever you want.

Grease a 9 x 13 pan. Toss the fresh fruit with the brown and white sugars and cinnamon and scatter over the bottom of the pan. Spread the baked oatmeal batter gently over the fruit, and sprinkle the ground almonds and demerara sugar on top. Bake at 350 degrees for 30-40 minutes. Serve warm with cold milk.

This same time, years previous: the big night and my artistic mother