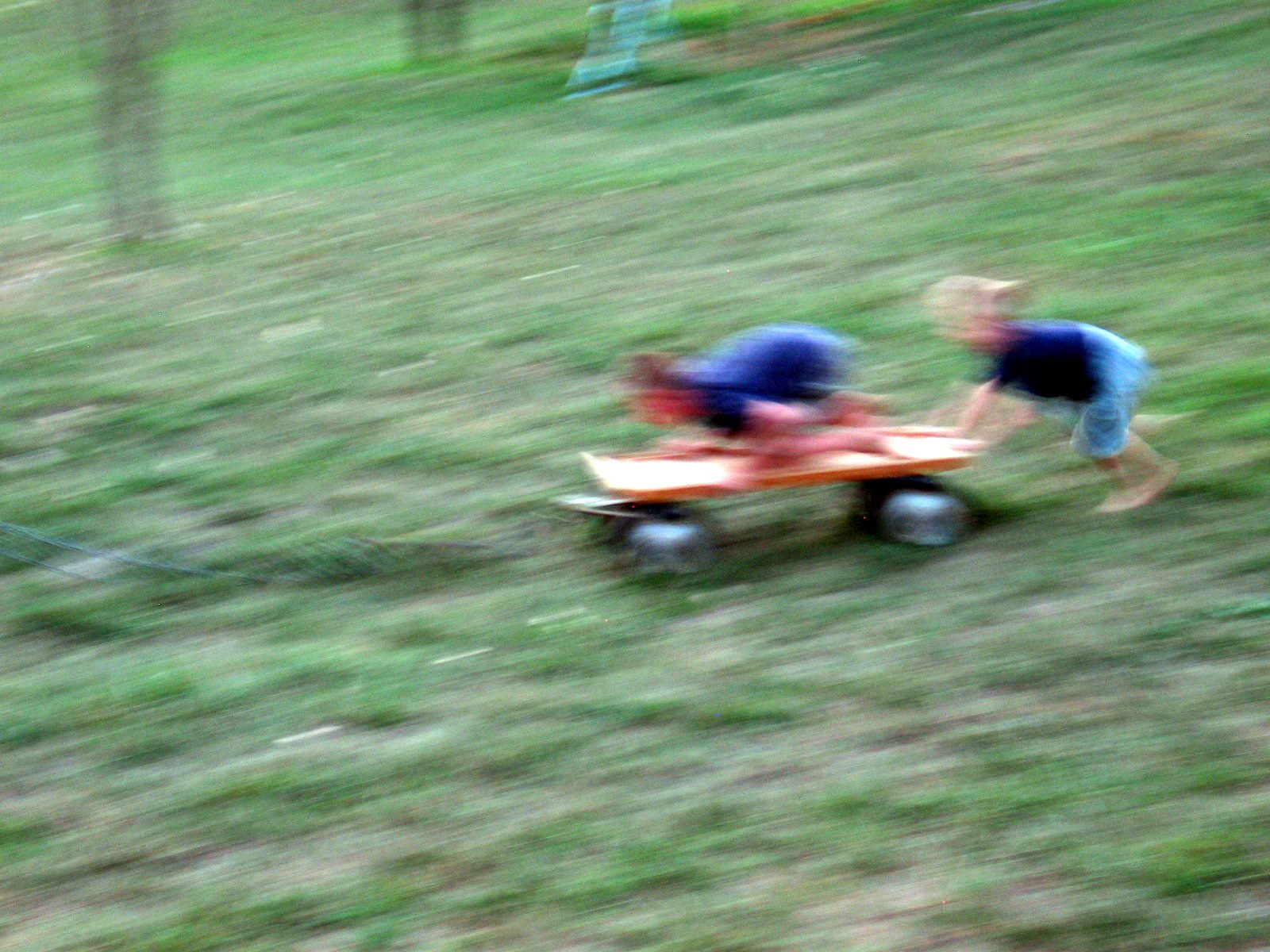 I’m not anti-science. Not at all. My father is a science teacher and a heck of a good one at that. (I had him in 8th grade for the unit on reproduction. I was not embarrassed, though I did harbor a secret fear that he would come into the room with his zipper down. This was/is not a problem of his, so I’m not sure where that fear came from, but I’m just stating the facts. My fear was never realized, thank goodness, and I loved having him as my teacher.) In high school I took as many science classes as I could get away with and I aced each one. I won in state science fairs more than once. Science was grand. Then I went to college and took the one required class of basic science and that was that. But still, I like science.

I just don’t teach it to my kids.

Okay, so that’s kind of a lie. I do teach them a leedle bitty bit of science, mostly in the form of reading aloud to them about things like the periodic table of elements, Experiments They Could Do at Home But Probably Shouldn’t, and stuff like that. We watch videos, too: “The world’s most incredible stuntman” (physics is a blast until the parachute doesn’t open) and Newton’s Apple and anything and everything from National Geographic.

But I don’t have a science curriculum and I don’t do science projects. No vinegar and baking soda volcanoes (though somehow the kids got into them anyway), no worm digging, no squealing over spider webs.

Though a couple weeks ago I did notice that there was a very flat, dehydrated frog in the driveway. For days it reclined on the gravel right behind where I park the van. I realized it was a good teaching opportunity and that I should show it to the kids. But then, I thought, they will pick it up and play with it and quite possibly dismember it and I’ll find bits of dried froggy leather all over the porch. So I didn’t say a word.

Until Saturday when “there’s a dried-up frog in the driveway behind the van” just kind of popped out of my mouth. Miss Beccaboo swooped down and snatched it up. She danced it around her papa’s head till he told her to knock it off (not his head, the annoying behavior) and then arranged it artfully on the porch banister. Then she-of-the-dry-humor said, “I think what it needs is a little bit of water,” and made like she was going to go get a bowl.

“No,” I managed to get out between loud guffaws, images of a bloated, stinky, slimy frog floating in a bowl on my kitchen counter. “You are not. Don’t even think about it.”

I don’t like messes (unless they are self-made), and I don’t have tons of energy to invest in lots of scientific hoopla. (I get swamped just making meals and dealing with attitudes, both theirs and mine.) But when it comes down to it, at this point in the game I don’t think I could beat what they glean from everyday life. Science, minus the labeling and correct terminology, just happens around here. Here are three examples:

1. When the kids were at my sister-in-law’s house the other day, she helped them collect caterpillars and nestle them into jars with leaves and twigs. Within a day, the shelf in Miss Beccaboo’s room held an array of caterpillar-and-leaf-stuffed jars. She faithfully feeds the worms (that’s what I call them), watches them make their cocoons, and then as they emerge, sets them free. I admire the pretty butterflies when she asks me to (all the while silently wondering if we’re perpetuating an unwanted breed of caterpillars, the kind that will next year wreak havoc with my dill and basil), and then tell her to please get her gross, disgusting, revolting jars off my kitchen counter.

2. The other day I ordered all the kids out to the garden to help me weed the strawberry patch. The kids worked hard, but they kept getting distracted by bugs and things. There’s nothing like a boring job to invite exploration and creativity! At one point, The Baby Nickel caught a grasshopper and opened its mouth to check for teeth. People plan little lessons around stuff like this, it occurred to me. They go on excursions and look under leaves. And me? I say, “Cool, hon. Now will you please put the poor grasshopper down and PULL THE WEEDS.”

3. The kids have been having a great time in the tomato patch lately. They spear rotten tomatoes with long sticks and then see who can wing the tomatoes the farthest. There’s physics in that, you know. Not that they know that, but I like to think that when they hit physics class and learn about Newton’s Three Laws of Motion, they’ll say, “Oh yeah, the tomatoes on sticks. We know all about that already.”

I’ll get more structured as the kids get older. In fact, I’m already digging around for a second-hand microscope. And I’d like to do some molecular biology with them this year. (That’s fancy talk for “study cells”). But in the meantime, I’ll settle for whatever comes along. If I’m in the mood, I may even seize upon it. (Maybe next time the dog kills a groundhog, I’ll hand the kids a knife and tell them to bring me the liver. Not to eat, though.)

The following pictures have nothing to do with the above subject matter, except that they’re of the kids. Last night they hooked some chains up to the wagon and commenced to pretending they were horses (or rickshaw drivers, perhaps?) and wild wagon drivers. They went fast.

So fast, in fact, that it appears that the Miss Beccaboo Horse is getting spirited away into the Celestial Heavens. 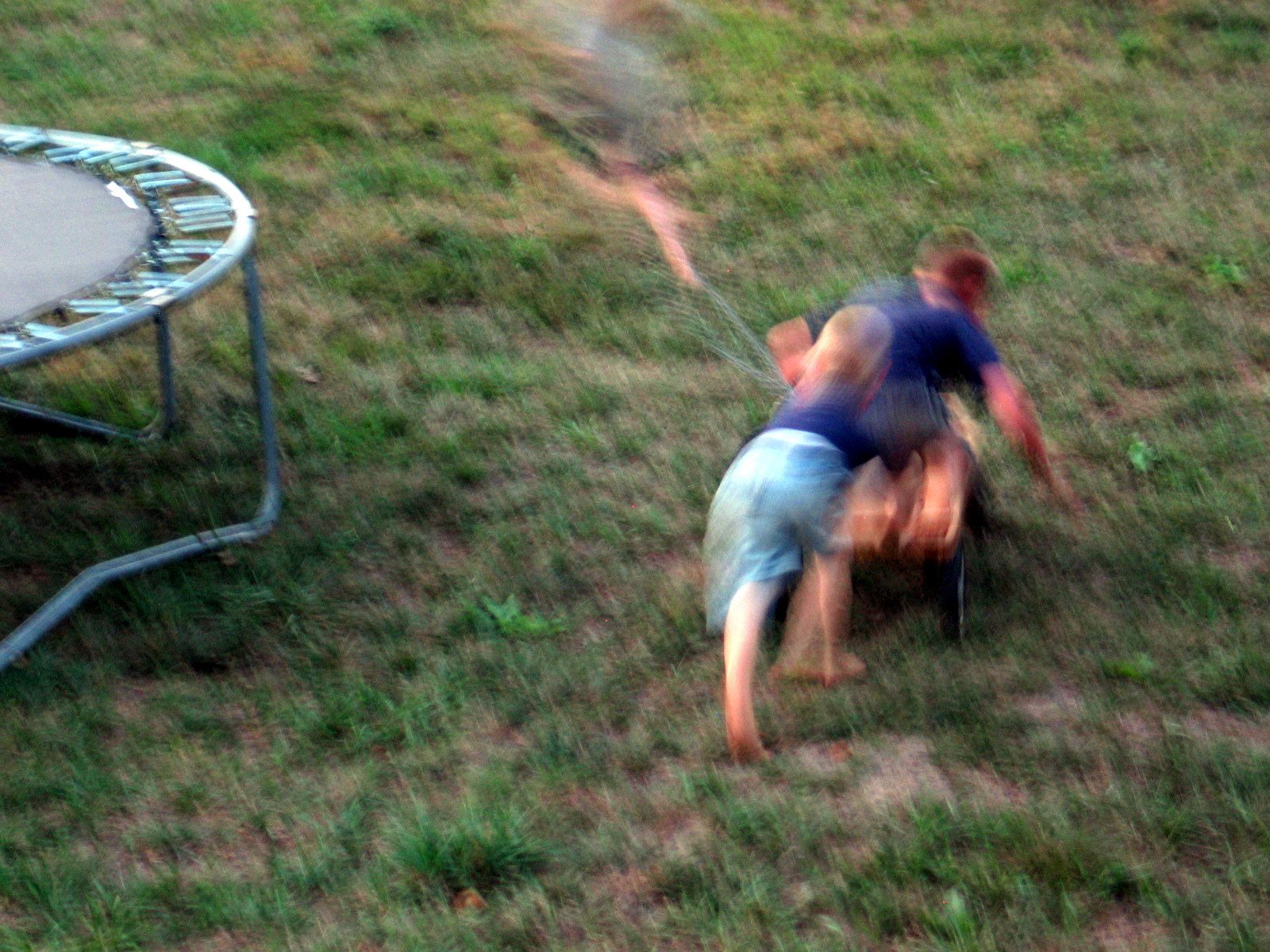 It got a little crazy… 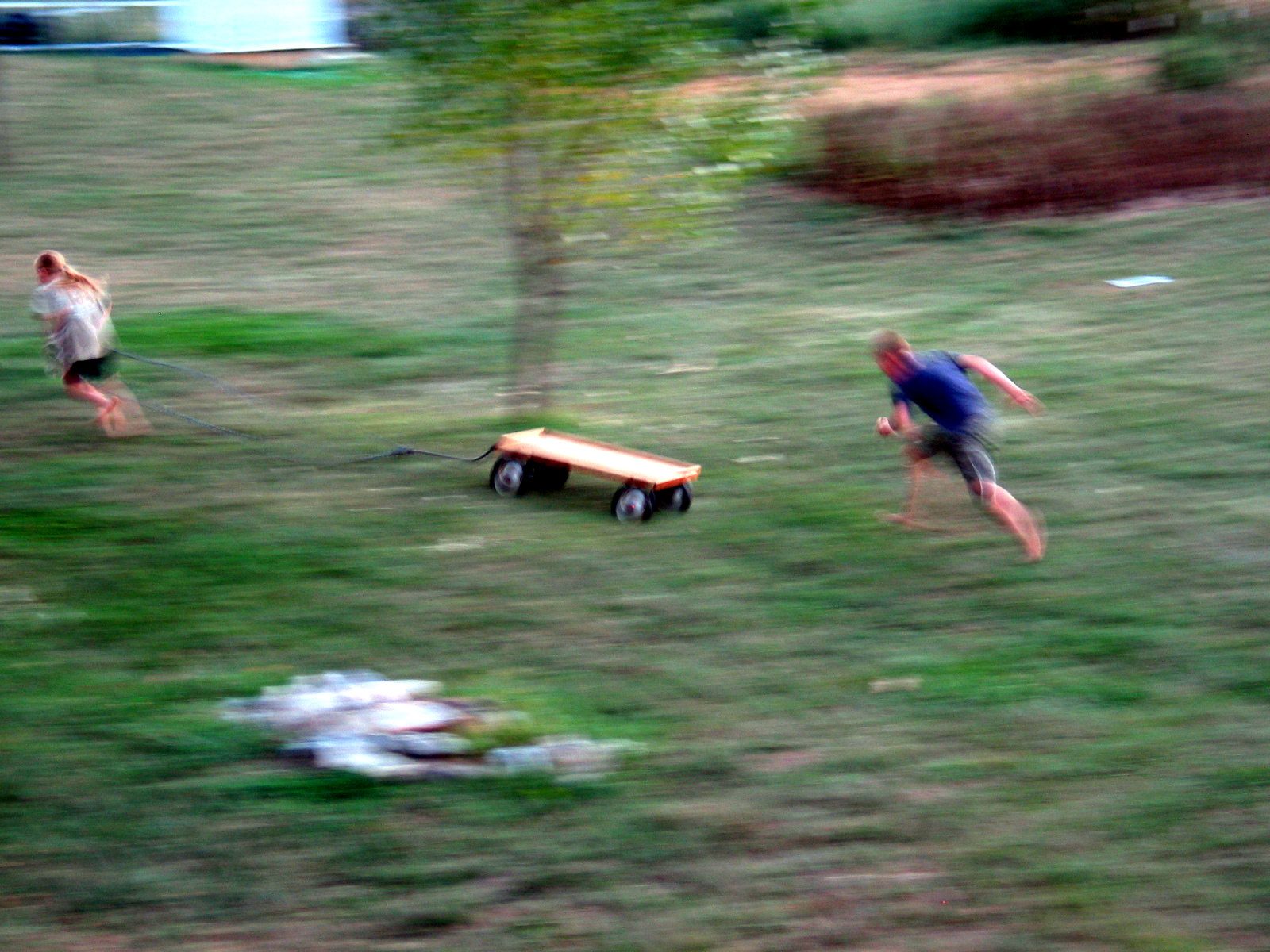 They were some stunts… 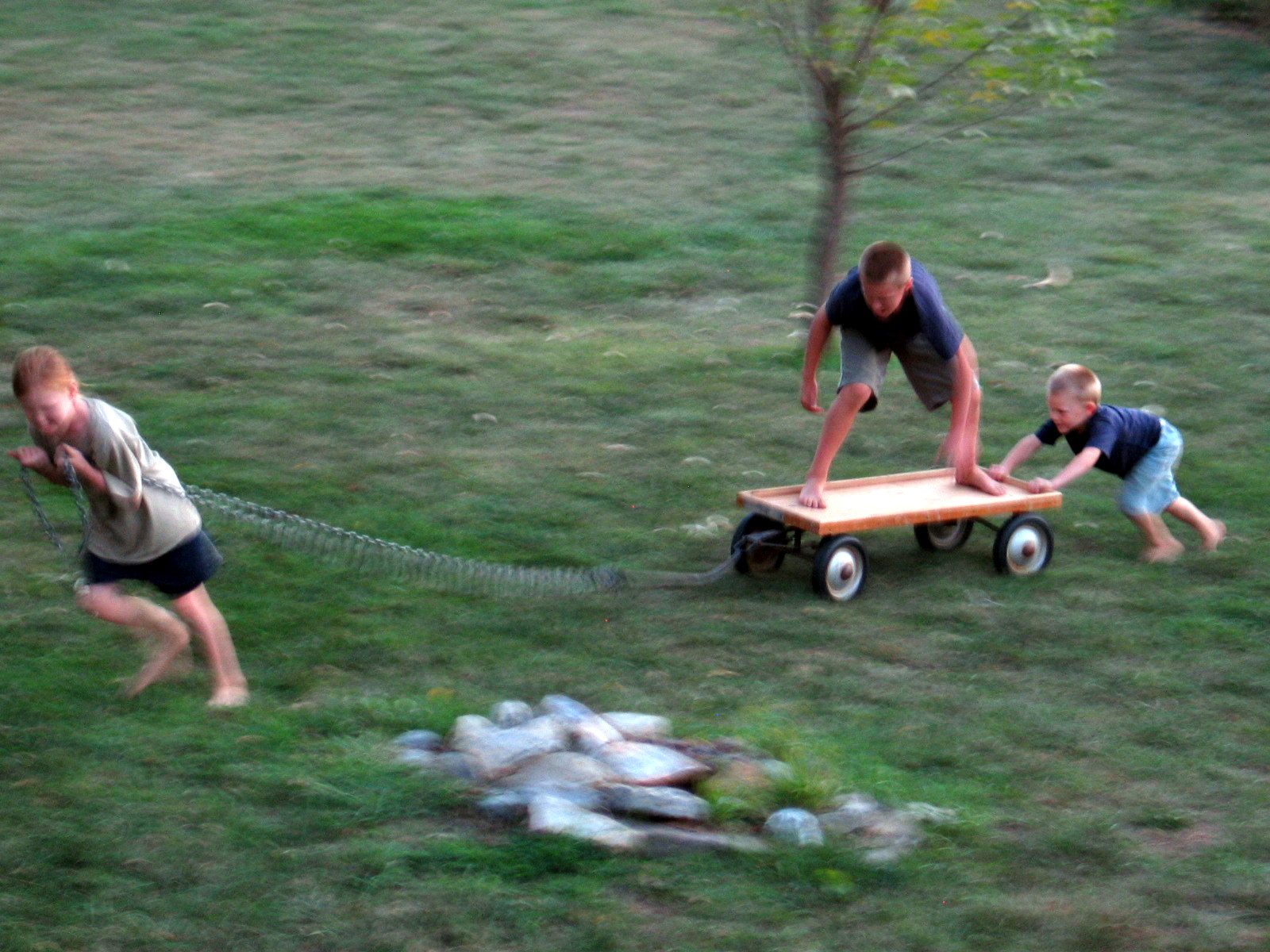 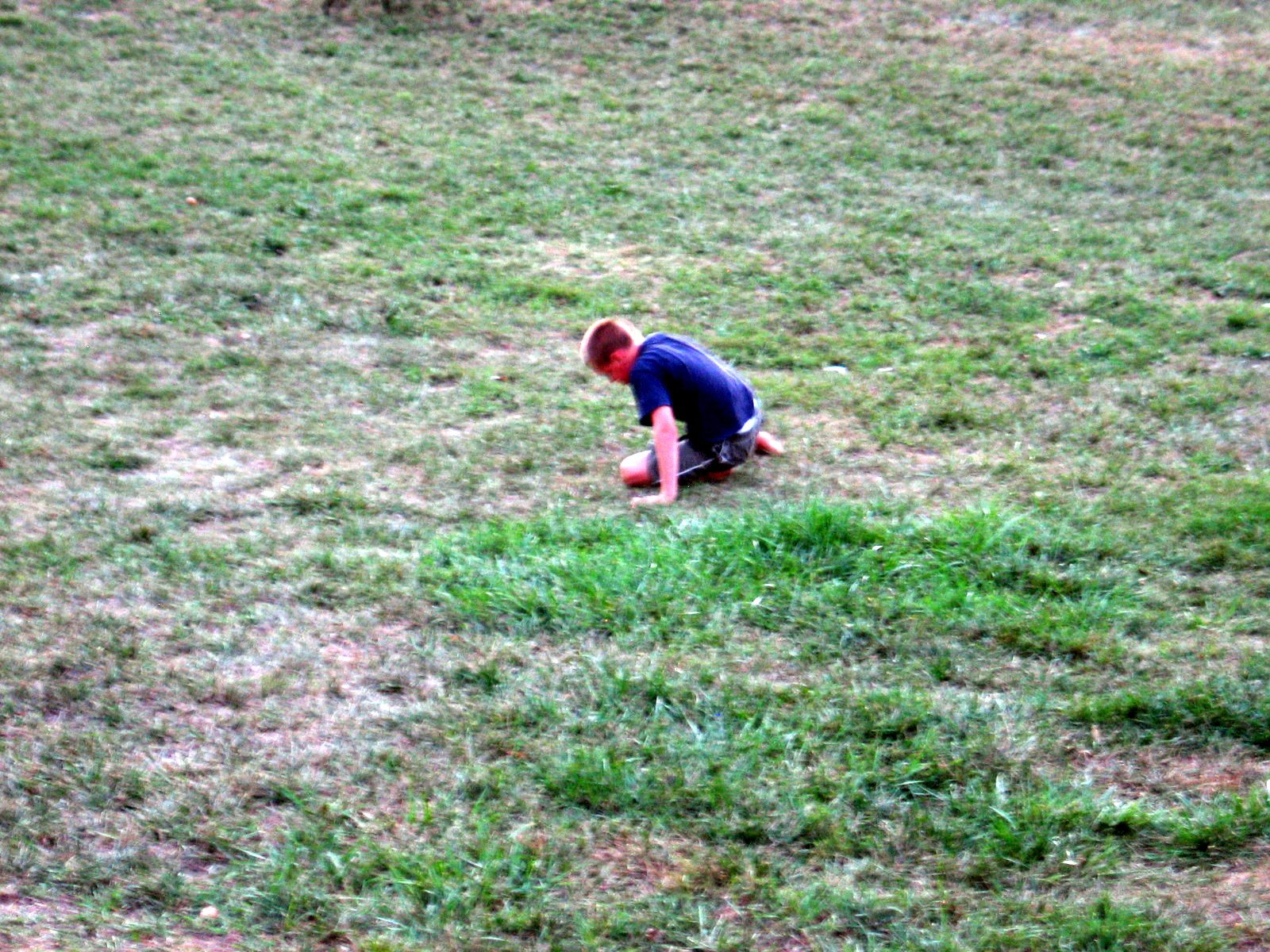 Then they got bored and scooted the trampoline under the swing set, something they’re not allowed to do. 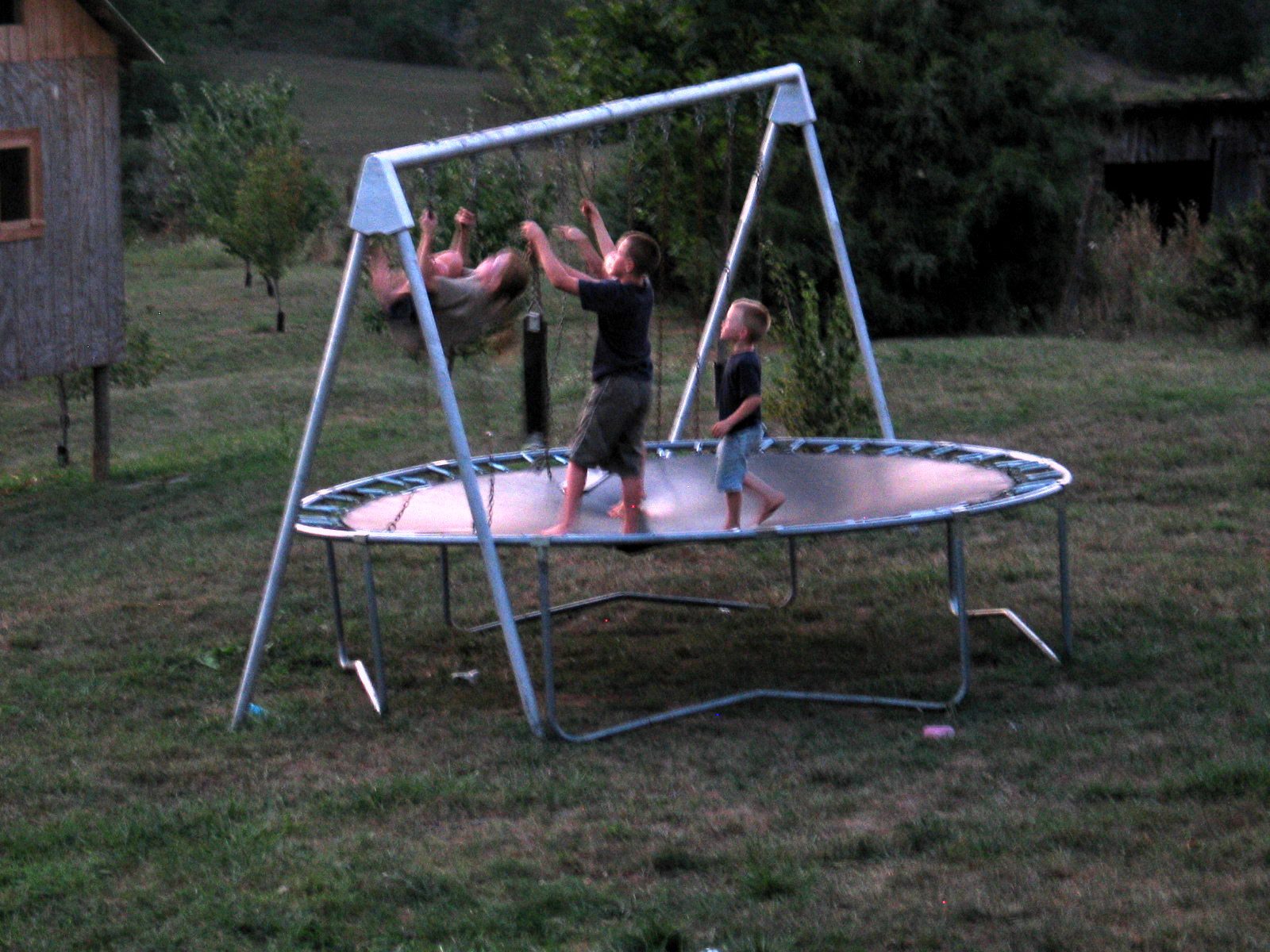 I stood on the deck and snapped pictures. 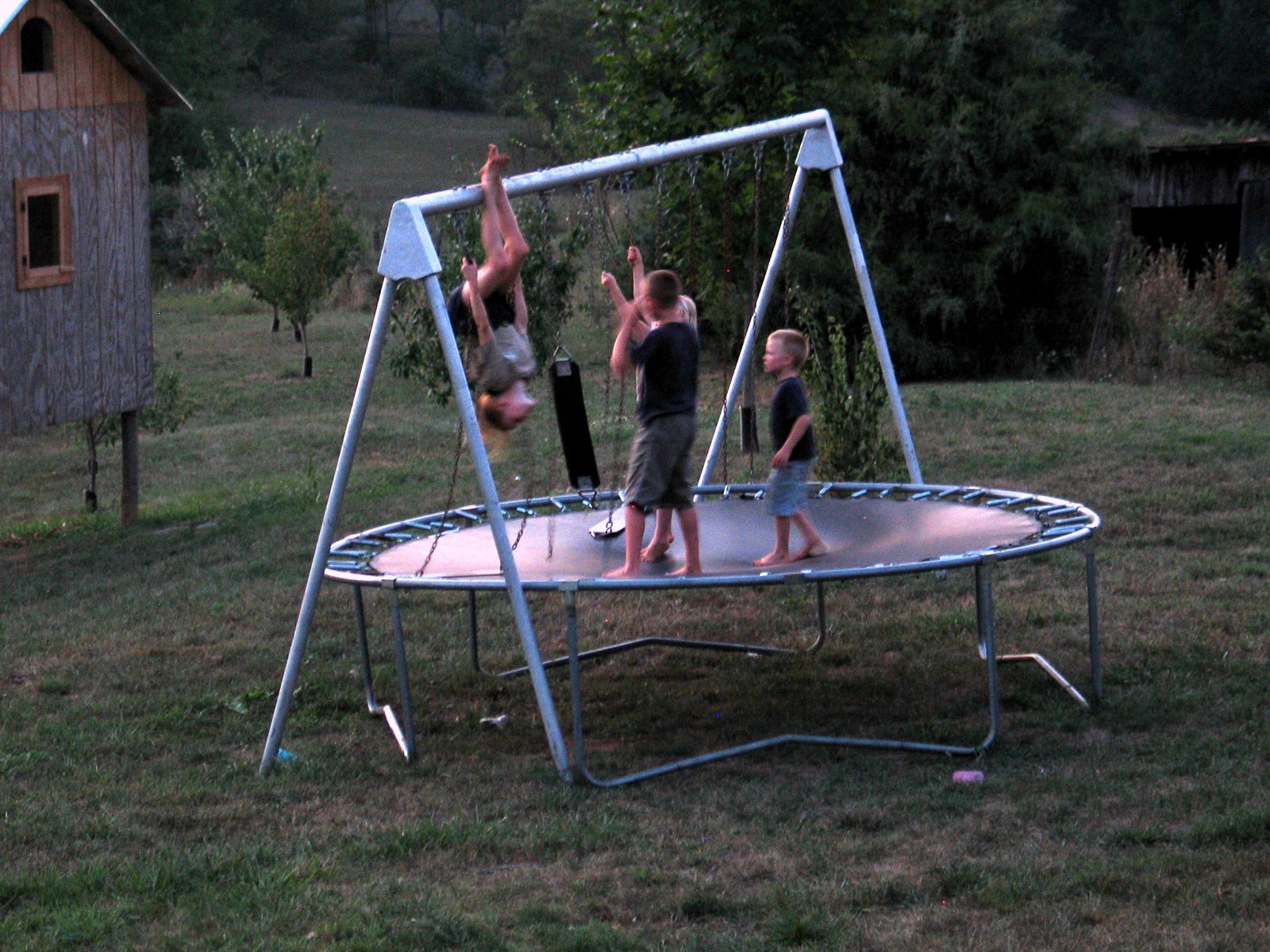 Then I called to Mr. Handsome who was out working in the barn. “Time for baths. Call the kids,” I said. After which I stepped back into the kitchen to make them some bedtime PB and J sandwiches, allowing him put a stop to their game. I’m so generous that way.