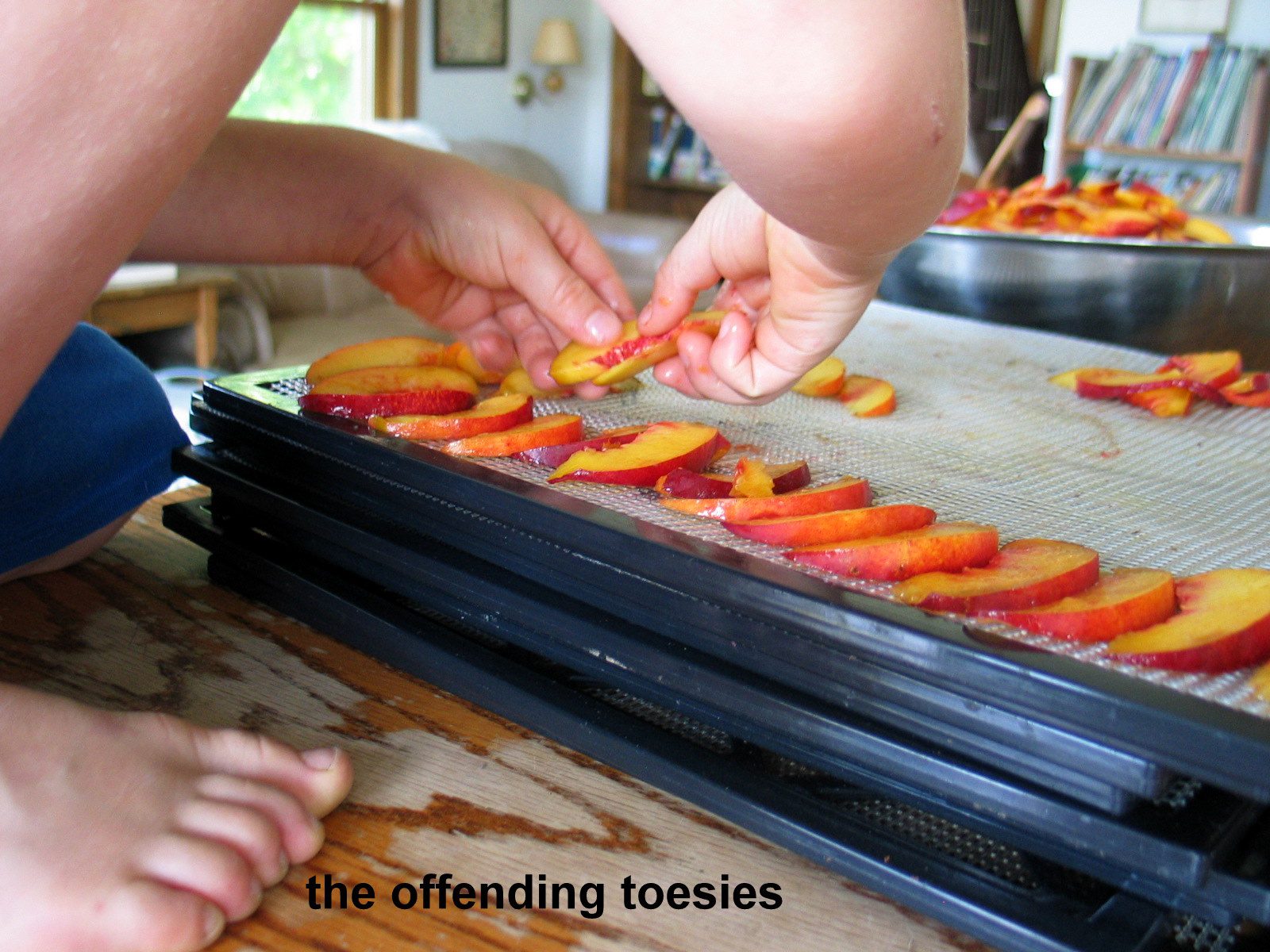 I’m getting a kick out of all the comments regarding the appearance of my baby’s toes alongside some nectarines in my ‘reenie post. I loved that picture—his big little-boy feet, his fumbly hands awkwardly attempting to manage the slippery slices, his squatting on the kitchen table, something I hardly ever let him do. That people would be revolted by my sweet baby’s stinky toes never crossed my mind. That it crossed theirs made me chuckle.

It reminded me of a post by David Lebovitz in which he photographed an elderly French woman make mayonnaise. Her hands were wrinkled and sun-spotted, the honest hands of a hard-working country woman. His photography was, as usual, superb. But some people were horrified by her hands (though those comments no longer remain on the blog). There was some black stuff—soil? chocolate?—under her nails! In deference to his sensitive readership, he removed the picture from the blog. I never even noticed her nails until I read the comments, and I was sorry to see the picture go.

I have a pretty high tolerance for dirt. This probably comes from our three years in Nicaragua where we lived in a multitude of homes before building our own—a house of dirt. (Am I sensing a theme?) While there, we witnessed/experienced the following:

*mice scurrying in and over food-laden pots
*delicious homemade cheese made from rennet that was made by soaking in a bit of dried calf’s intestine in some leftover whey
*fly-covered food
*chicken butchering in the middle of the kitchen
*babies without diapers that then peed on everyone and everything (of course)
*babies crawling on dirt floor and gnawing on leftover chicken bones that had been tossed down
*pigs in the house
*minimal, or no, refrigeration
*dirty milk
*a mother mouse (er, RAT) scrabbling through my hair in the dead of the night (eek!)
*street food
*fly-infested kitchens (you’ve never seen anything like it—don’t even try to tell me you have)
*dirty water

And while I’m on a roll, I might as well mention no car seats, no seat belts, scorpions, latrines, poopy potties, machete-wielding children, exposed wiring in showers, crazy bus drivers…

I learned that you can eat food off of some pretty dirty surfaces and not get sick. (And if you did get sick, which we did—well, it wasn’t the end of the world. Bodies heal. Not that I’m a fan of giardia…) I’m not condoning these things, or, worse yet, idolizing poverty, but it was made clear to me that dirt isn’t evil incarnate.

As you can probably imagine, my child’s feet on my kitchen table is quite mild by comparison.

And! Just for the record! I sweep the floor before we eat off of it, the dog does a great job of licking clean the plates, and I even boil the toothbrushes after using them to scour the toilet. Want to come over for supper?