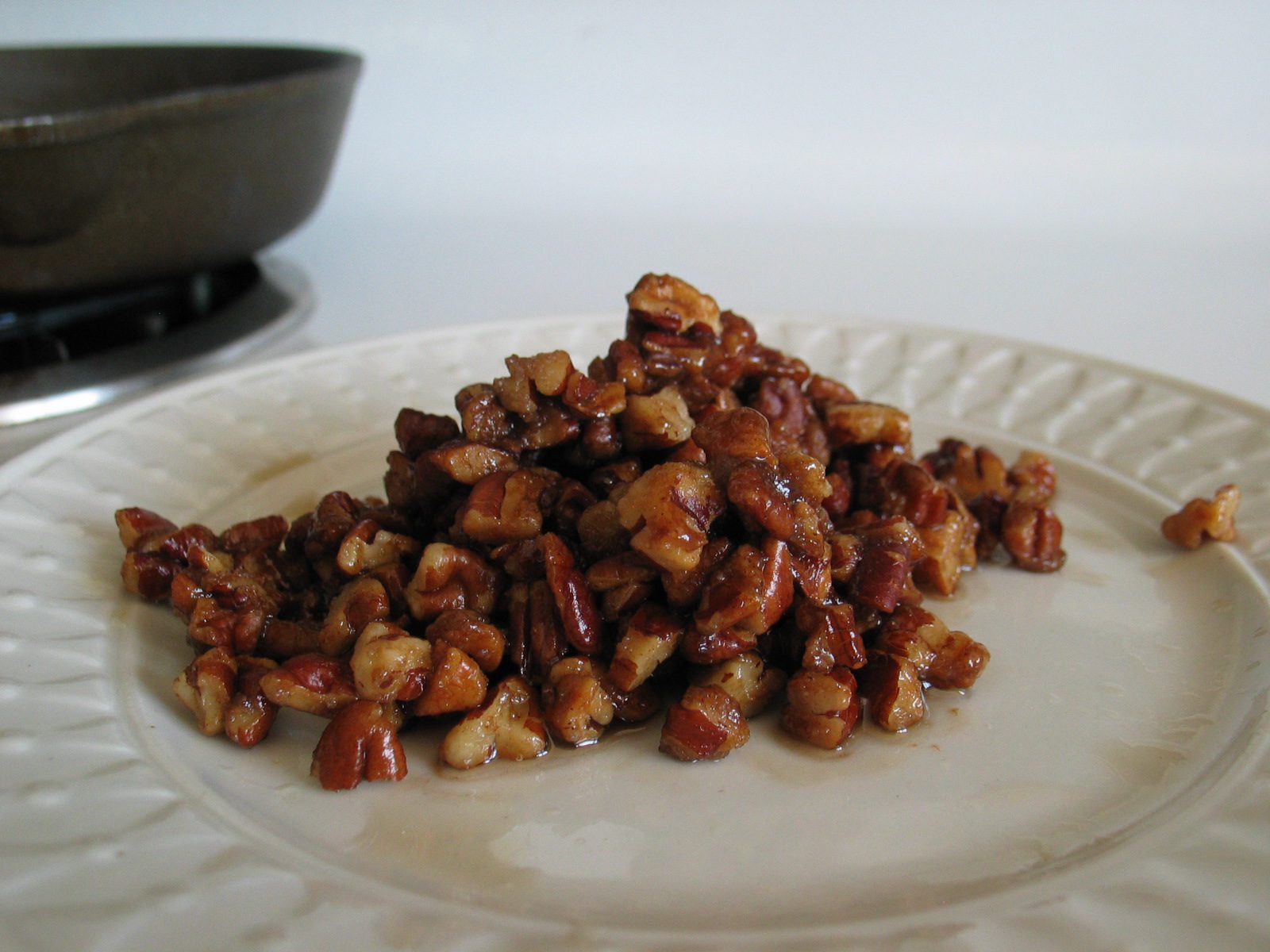 I don’t usually fly apart, running hither and yon like a chicken with its head cut off. I get very busy, yes, and I run around doing multiple things at one time, but usually I pace myself. I’m loathe to give up my routines for anything, least of all work, and I will fight to the death for my breaks.

I have a philosophy which goes something like this: there is a time for every season under heaven, a time to do dishes and a time to do email, a time to boss the kids and a time to let them play, a time to hoe the beans and a time to veg on the sofa…and all that jazz. I just know I’m going to be one of those ploddy old ladies who gets up at 5:30, brushes her teeth at 5:32, gets dressed at 5:34, goes for a walk at 5:40, showers at 6:25, eats her bowl of oatmeal at 6:52, washes her bowl and spoon at 7:06, and so on.

Seriously though, I love routine. Deciding to brush my teeth in the upstairs bathroom instead of the downstairs bathroom involves forethought and deliberation, and then I get a giddy feeling when I do the unusual.

I kid you not. It doesn’t take much to rock my world.

My sacred morning routine, pre-old lady stodgy behavior, is thus: I make my coffee, check emails and blogs while my eyeballs de-fuzz, and then—BOOM!—it’s up and at ‘em (with plenty of little breaks sprinkled through out my day).

This morning, my normal routines got tossed to the wind and I plowed through my day in quite uncharacteristic fashion:

*Up at 6:15, I dressed and walked to my brother’s to take care of their garden/cat since they’re on vacation. On my way up their drive, a ring-nosed bull roared repeatedly and then stared at me in a most menacing fashion, which caused me to panic and make a mad dash for the gate. (I ascend the stairs at night in a similar fashion, petrified some hairy arm is going to reach up through the banister railings and grab my ankle—eek!) The whole time I picked raspberries and blueberries, I plotted my escape plan. It ended up being a lot easier than I expected, considering that the roaring bull was off over the hill chasing some bovine damsel, but even so, I had to force myself to walk calmly and sloooowly down the drive. Cows creep me out.

*Back home, I headed straight for the pea patch, and then, pea-picking still unfinished, I went into the house to wash my hair and dress, help Mr. Handsome restock the newly defrosted freezer, and make my coffee and toast.

*9:15—off to town with the boys, to help out a friend of mine and to stock up on library books.

*Once back home (now noon), I went back out to the garden to finish picking peas (and have a rousing fight with Mr. Handsome since peas and fighting go hand-in-hand in this house), then lunch, pea hulling/blanching/freezing, dessert making (times two), dish washing, email checking, list making, and coffee concentrate straining and iced tea brewing. Whew!

I had a point to all this when I started writing, but now I can’t for the life of me remember what it was. I think I done did wear myself out all over again just writing about my day.

[Insert pause while I think, check my photos in hopes of jogging my memory, check facebook just for anyhow, give up and come back here.]

So since I have no point (perhaps there is no point to be had), let’s talk about … cabbage!

I have six bulbous ones out in the garden, and they keep swelling at a most alarming rate. That’s not even the half of it, though—I already have two partially used cabbages rolling around in my fridge, cabbages that I bought back when I was hungry for cabbage and mine were still too little. So now I’m already tired of cabbage and I have yet to cut one of my own.

Serves me right for jumping the gun.

I did, however, discover a marvelous new slaw recipe.

Slaw is such a finicky thing, or perhaps it’s that the people who eat it are finicky. (Or maybe it’s just me, finicky, ol’, stodgy, routine-ridden me.) I’ve done a fair bit o’ experimentin’ and the vast majority of recipes fall short. It gets rather discouraging after awhile.

In any case, I finished assembling this slaw while on the phone with my mother. I took a bite and then screeched in her ear with my mouth stuffed full of crunchy, lemony, butter, nutty goodness: “Wow this is GOOD, Mom! You gotta make it! Just cabbage and green apple, lemon juice, salt and pepper and then some toasted, buttered and sugared pecans. Wow, Mom, wow! Oh my lands WOW!” Crunch, crunch, crunch. 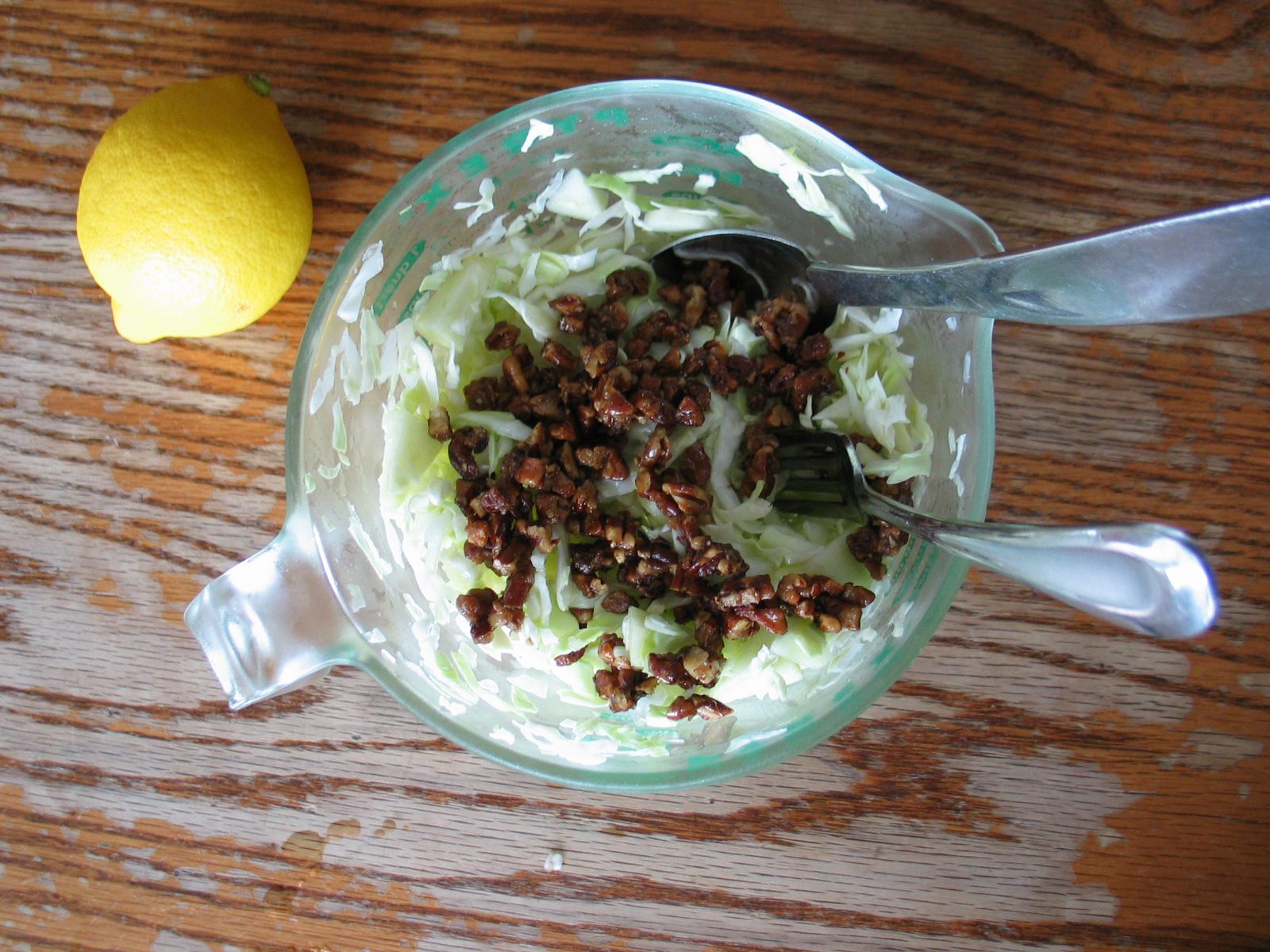 The original recipe calls for 1 tablespoon chopped chives. I, however, did not use them (either forgot or didn’t know to), but I think they would probably taste great. Next time…

It’s the pecans that make this slaw, so don’t you dare leave them out. The granny smith apple is pretty important, too. As is the fresh lemon juice. Come to think of it, don’t mess with this slaw at all, understand?

There. I’m glad we got that straight. You may proceed.

Melt the butter in a small skillet, add the pecans and stir for one minute. Add the sugar and stir around for a few more minutes, until the pecans start to brown. Transfer the nuts from the skillet to a plate and set aside to cool. They will harden and clump together, but no worries—just break them apart before adding them to the slaw.

Toss the cabbage and apple with the lemon and some salt and pepper. Add the nuts.

Still, no matter how good the recipe, I don’t think I can eat six heads of cabbage worth of this slaw. Plus, it’d be mighty expensive what with all those pecans. Other suggestions? What’s your favorite slaw recipe? I’m thinking I might chop up a couple heads of cabbage and simmer it in beef/chicken broth before freezing it for winter soups. Do you think that would work? Do you employ other cabbage preservation techniques? Do tell, please.

About one year ago: Nothing, so how about cabbage previously? There’s braised cabbage (more a cold-weather recipe, but ever so delicious) and Chinese cabbage and apple salad (it appears I have a thing for cabbage and apples).