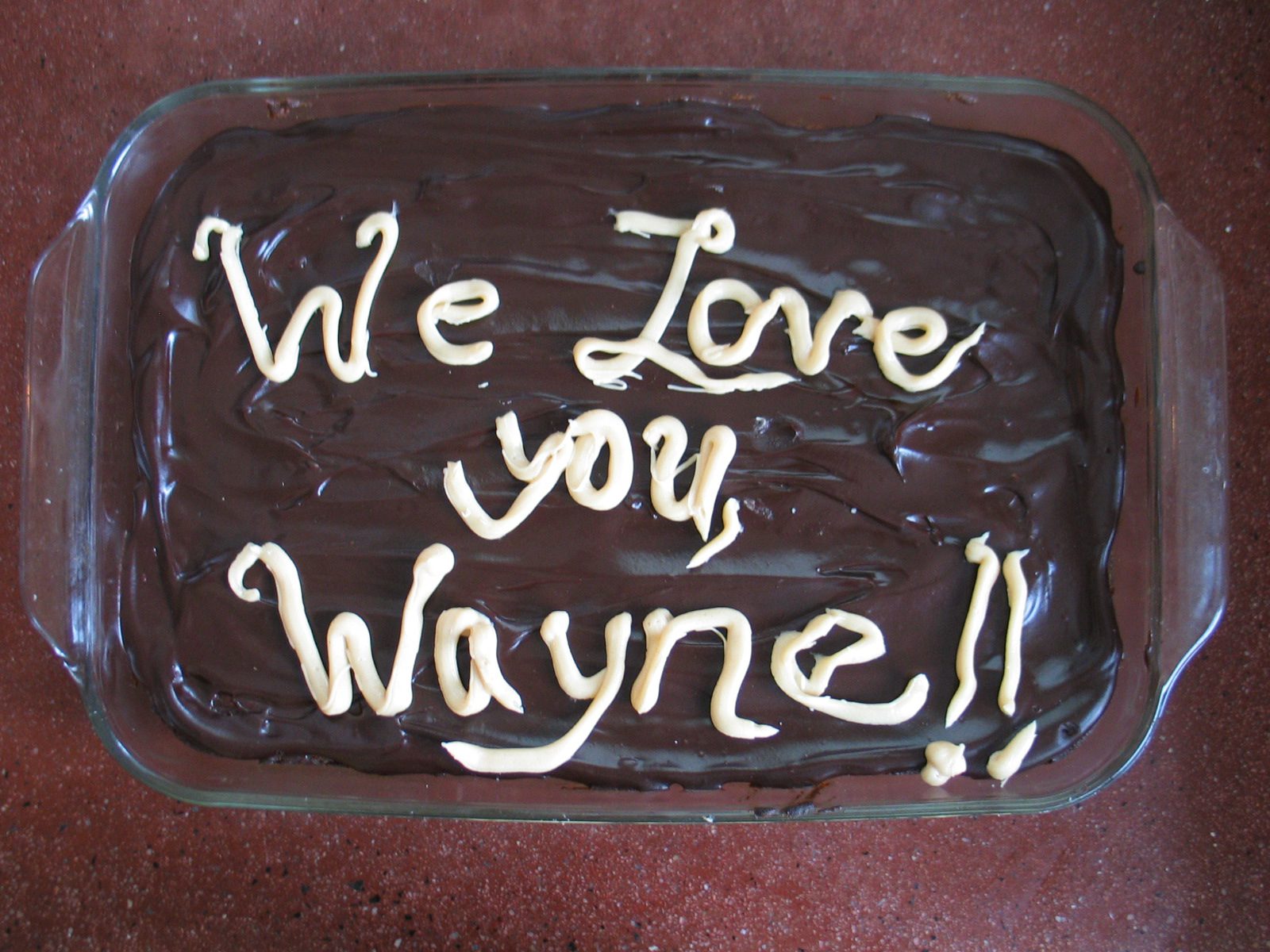 After living nearly ten years with a brain tumor, my friend’s husband Wayne is nearing the end of his life.

On Monday I told the kids that Wayne will soon die, maybe tomorrow, maybe in two weeks, maybe in a month. “You were aware that it was getting close, right?” I asked, trying to gauge their level of understanding.

Yo-Yo said, “Oh yeah, we know all about it. I wish I could make myself big and make him all better.”

On Tuesday morning I asked the kids if they’d like to go see Wayne. The girls both said yes. Yo-Yo said no.

“Do you want to take him anything?” I asked.

“Let’s make him a cake,” Miss Beccaboo said. “And we could write ‘We love you, Wayne’ on the top of it.”

“That’s a nice idea,” I said. “But he’s not eating anything, you know. Mostly just some applesauce when he takes his pills.”

“Then how about we make him an applesauce cake!” Sweetsie said.

“Well now, that’s a thought,” I laughed. “But he couldn’t eat that either. But you know what? Let’s make him a cake anyhow. Even if he can’t eat it, I bet he’ll still like it. And the rest of the family would enjoy it.” And then I put my head down on the table and sobbed, worn out from the previous night’s crying jag, raw from the horribleness of it all. (This is what I do now, cry at the least provocation. I cry on the phone, while I’m hanging up the laundry, while I’m driving. My eyes are sore, I have trouble concentrating, and I snap at my kids. I crave sleep, but even when I get it, I feel tired, all muddly and distractable.)

So I blew my nose, hugged Sweetsie who was watching me warily, her eyes rimmed with tears. And then I made a cake. Or, rather, chocolate chip peanut butter brownies spread with chocolate ganache, our love scrawled across the top in peanut butter frosting. I made the whole thing, for the most part, but the kids hovered and tasted and admired. It was a joint-enough effort for me.

Wayne was sleeping when we got to their house, but then he woke up and Shannon wheeled him out into the room. The Baby Nickel, the only child present at the time, stared and grinned, grinned and stared. Shannon said, “Say hi to Wayne,” but Nickel just grinned away. Wayne poked him as he rolled on by.

Sweetsie came into the room then and as she tip-toed by his chair, Wayne stuck out his good arm and attempted to tickle her. (It’s his signature move, teasing, tickling, and rough-housing the kids.) She giggled and, suddenly shy, crawled onto my lap. “Go get the cake and show it to him,” I urged. And she did, approaching him slowly, the cake extended in front of her. Wayne took it from her, read it, and passed it back. I told him the story about Sweetsie’s applesauce cake suggestion. He looked at me, expressionless (the brain tumor has squelched his affect), but he heard—his eyes told me so.

When it came time to leave, Miss Beccaboo walked by his chair and Wayne snagged her, hugging her to him.

Or so I’m told. I was out on the back deck trying to convince Yo-Yo to come in and say goodbye to Wayne. Yo-Yo refused, and once safely in the van he burst into tears. I didn’t blame him, really.

This afternoon I got an email from Shannon saying that Wayne ate some of the cake. In fact, he loved it so much that she had to take the plate away from him so he wouldn’t get too much in his mouth at one time and choke. He kept grabbing for it though, she said. The sneaky guy.

I hollered from my desk, “Hey kids! Guess what! Wayne ate some of your cake and he loved it!”

The Baby Nickel asked excitedly, “Wayne’s not going to be dead now?”

My heart seized. I said, matter-of-factly, but gently, “No, honey, he’s still going to die. But he liked our cake. Isn’t that neat?”

About one year ago: Aunt Valerie’s Blueberry Bars